This year marks the 75th sailing of the legendary Sydney to Hobart yacht race. After its relatively relaxed beginnings on Boxing Day 1945 – just months after the end of World War II – the race has evolved into a highlight of the ocean racing calendar. Known as one of the world’s toughest blue-water events, it attracts sailors and yachts from around the globe. For some it’s a social or sporting event, for others a fierce competitive challenge. For many, it is a bucket-list aspiration.

This year 170 boats will gather: greyhounds, bare-bones super-maxis and veteran timber cruising craft among them. It is this variety of yachts, sailors and motivations, combined with the variability of the weather and waters over the 1,160-kilometre route, which gives the race its personality – equal parts old sea dog, sprinter, sports star and supermodel.

Last year Wild Oats XI took line honours for the ninth time with the extraordinary Mark Richards at the helm, and Alive became the first Tasmanian boat in 39 years to claim the title of overall winner on handicap. The current race record was set in 2017 by LDV Comanche, at one day, 9 hours, 15 minutes and 24 seconds – an unthinkable record for those who sailed in the very first race 75 years ago. 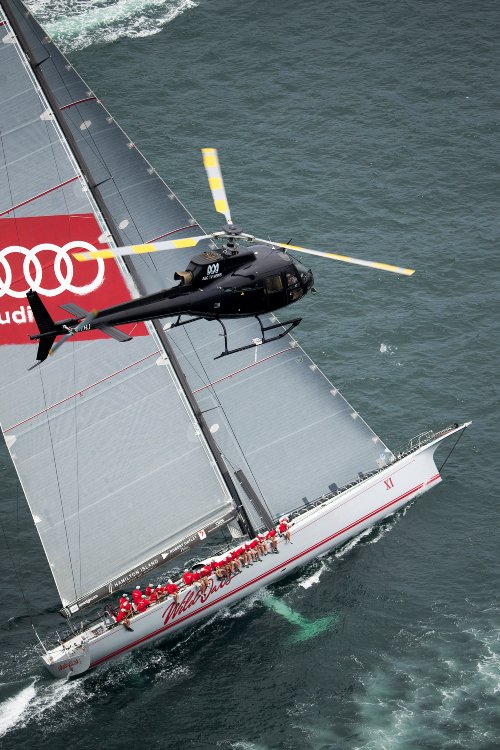 The first ‘Hobart’ sailors were friends from the newly formed Cruising Yacht Club (now the Cruising Yacht Club of Australia – CYCA), who decided on a summer cruise together to Hobart. Before they left Sydney, British yachtsman John Illingworth joined the group and proposed making it a race. The Royal Navy captain had been stationed in Sydney during the war. It was just months after the armistice and life was returning to its peace-time rhythms. The CYCA teamed up with the Royal Yacht Club of Tasmania to co-manage the race and, in the interests of keeping the focus on ‘cruising’, spinnakers were not permitted.

Nine yachts left Sydney on December 26, 1945. On 2 January 1946, Illingworth’s Rani – whose crew was mostly assembled from defence personnel – was first across the line, with a time of six days, 14 hours and 22 minutes. Peter Luke’s Wayfarer arrived after 11 days, having anchored en route at Port Arthur for roast pork and crayfish! His record stands as the slowest passage in the blue-water event.

The race grew in the post-war years, with peaks and troughs through the decades. It has seen huge social and technological change, resulting in necessary revisions of safety standards and rules. A major turning point in its history came with the deaths of six sailors in 1998, after hurricane-force winds decimated the fleet.

To mark the 75th race, the museum has developed a program of exhibitions in and around its site, including the Tasman Light Gallery, Yots Café and our wharves, where you can see the iconic Kathleen Gillett, the ketch that sailed in the very first Hobart race. The Tasman Light Gallery is named for its central feature – a large, historic, first-order lens from the Tasman Island lighthouse, which all yachts in the Sydney to Hobart must pass on the final leg of the race to the finish line on the Derwent River.

Challenging, Thrilling, Racing is a dramatic visual essay about the history of the race, with a special focus on photography located in the Tasman Light Gallery. Also on display is a showcase containing the timber trophy presented to the race’s first winner, John Illingworth, as well as examples of early navigation equipment and memorabilia, a model of Wild Oats XI and a model reconstruction of a helicopter rescue of imperilled sailors in the 1998 storm. Tiger 75, the Royal Australian Navy’s 816 Squadron Sikorsky S-70B-2 Seahawk helicopter that took part in that rescue is suspended from the ceiling of the adjacent tall gallery. The helicopter has recently been transferred from the Royal Australian Navy Fleet Air Arm Museum. 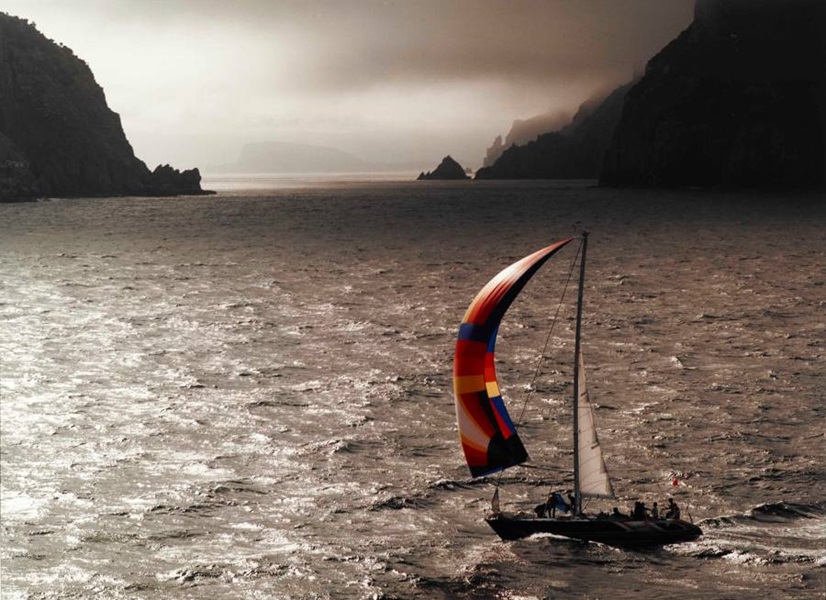 Works by Tasmanian photographer Richard Bennett are on display in the gallery, and they will also feature in the museum’s café, Yots, in the lead-up to the race. Bennett’s speciality is aerial photography, and in 1998 his aircraft was requisitioned for the search effort. His photographs of Stand Aside and Midnight Rambler fighting the huge seas have become two of the most compelling photographs from that tragic race.

Bennett, an ocean sailor himself, first photographed the Hobart race in 1974 and has captured every race since, acquiring a pilot licence to help in his search for the perfect shot. His yacht photographs are characterised by moody seas and the dramatic lines of Tasman Island landscapes. One of his personal favourites is the Shogun photograph of 1984.

I love everything about the Sydney to Hobart: the many moods of the sea, the sense of participation in a great adventure, the camaraderie, the tactics, sensing the proximity of the elements, the wildness … the gales, the different light and the dramatic coastline. It’s about putting all those elements together. There is an organisational challenge in being in the right location to capture the peak of the action. (I am not there often enough, according to the yachties!) Richard Bennett

Borlenghi grew up on Lake Como and developed his passion for photography while studying engineering. A non-sailor in a circle of sailing friends, he began to attend his local regatta. He travelled the world for the magazine Umo Mare Vogue, photographing the most important nautical events, and his passion grew into a career of international renown. Carlo Borlenghi is the official photographer for Rolex, the Sydney to Hobart race sponsor. 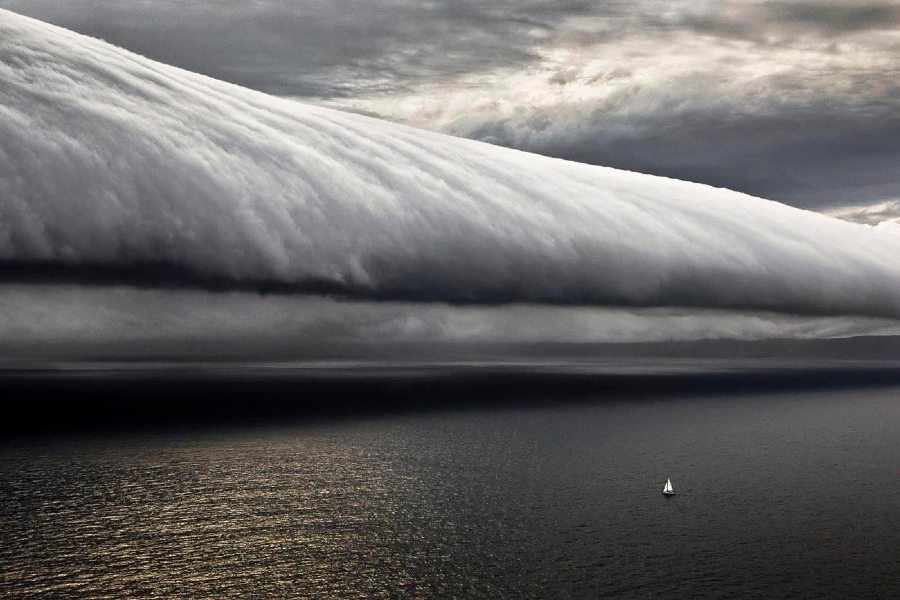 Borlenghi’s perspectives include close-framed, high-octane action on the water and panoramic aerial shots. All reveal delicate subtleties of light and tone, a Borlenghi signature, and capture an excitement of moment or mood. One of his photographic heroes is Henri Cartier Bresson, who promoted the pursuit of the ‘decisive moment’.

In all these pictures the common denominator is ‘Nature’ - the incredible light, the big sea, that you don’t find anywhere in the world. Everybody knows that my favourite race is the Rolex Sydney to Hobart Race because I like the strong sea, the big waves, the different scenery. You can find so many different things: a good background for the start in one of the most beautiful cities in the word [and later] the organ pipe and Tasman Island. Carlo Borlenghi

Andrea Francolini is another non-sailing Sydney to Hobart photographer, trained in graphic design in his native Milan. He found his vocation after a fall into the water before his first regatta left him stranded on the dock taking photographs. Francolini moved to Australia nearly 20 years ago and developed his career on the water. It remains his mainstay. Today his interests are broad and his work is informed by his admiration for reportage and portrait photographers Sebastiao Salgado, Richard Avedon and Annie Leibovitz, and Australian photographer Trent Parke.

When shooting boats, no day is the same. The boats change and, on the water, will never react the same way. A splash will always be different. As for the beaches and the ocean in Australia, the size is what really gets me, and how rough the ocean can be. The light here, too, is very different to the light in Europe or other parts of the world … You have to respect the ocean at all times. Andrea Francolini

In 2003, a portrait-sitting with sailing winemaker and businessman Bob Oatley AO BEM, led to a 14-year appointment photographing the new Oatley super-maxi Wild Oats XI – from its construction in 2005, a record of modifications, its crew and team, and above all its record-breaking run in the Rolex Sydney to Hobart Yacht Race. At the time of print, the nine-times line honours champion is undergoing urgent repairs to enable it to contest the title for the tenth time in this, the 75th race. Good luck to all 170 entrants in this year’s historic Sydney to Hobart.

Don't miss Challenging, Thrilling, Racing: Sydney to Hobart 75 Years, a dramatic visual essay about the history of this prestigious race on display now.

Main image: Skipper Captain John Illingworth (centre standing in cap) with the crew of Rani, the winner of the first Sydney to Hobart Yacht Race, 1.45 am, 2 January 1946. ANMM Collection 00048228_003, Gift from Alison Richmond

View all posts by Daina Fletcher→
Posted in: Exhibitions
↑