Alotau, on the shore of Milne Bay in Papua New Guinea, is a place of stark contrasts. It’s a far western, outback-style country town, undeniably rough on more than just the edges but set in paradise with spectacular scenery all around. Sea and air transport are the only connection to the rest of the country, weather permitting. Historic Vessels curator David Payne and Indigenous curator Helen Anu were there to attend the opening on the 24th October 2019 of the Massim Canoe Drawings exhibition at the Massim Museum and Cultural Centre.

This was a display of 22 plans of their traditional single outrigger and war canoes David had drawn after a month-long trip by launch in August 2017, where he documented these amazing, sophisticated traditional craft. The exhibition was proudly supported by the Australian National Maritime Museum, and gave the Massim Museum a wonderful opportunity to showcase their new location in Alotau with a special display along with a gala opening event that brought many people from community and business together.  This event was very kindly sponsored by DFAT in Port Moresby and was attended by the High Commissioner Brian Davies, Consul General Jo Stevens and other staff.  It was an excellent social occasion for Alotau and the plans drew many compliments on their detail and manner in which they will help preserve this aspect of Massim culture and inspire others in the community. Coverage was excellent, with two media interviews undertaken by David; both were for TV and also adapted to print/radio. The current Air Niugini Paradise in-flight magazine for November/December also carries a four page illustrated article about the plans and 2017 expedition. 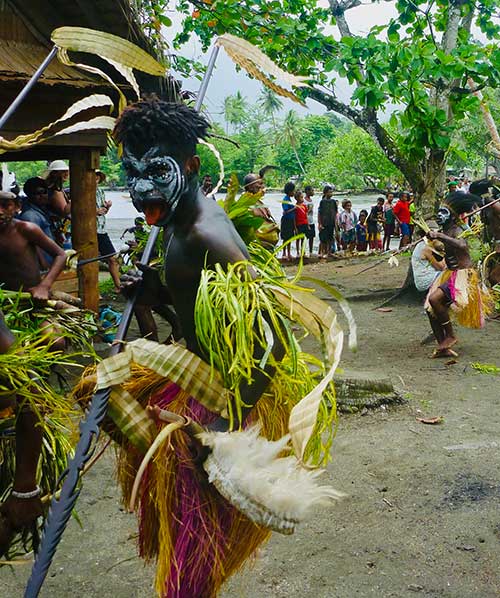 A leader of a procession at the Tepali Wagawaga village. Photo: David Payne, ANMM

The annual Huhu Bay War Canoe Festival is a significant cultural event. Even though it is open to the public, it is not widely attended by people outside of the communities involved and it was a privilege for David, Helen, and the small number of visitors to attend. It brings together a number of Milne Bay communities that once raided each other, but now use their lopos or gebo canoes as a means of coming together and socialising. The Wagawaga village chief Dago Alisa very kindly acknowledged our presence throughout the day, speaking to us personally about the activities early on and making introductions, including two canoe builders.

It is an exciting and even confronting event, beginning with processions, dancing, and kundu drumming as part of Tepali, where the communities involved present gifts and food to the village hosting the event. Live pigs are brought in to exchange; produce from gardens piled high, the aggressive actions and dancing by war-painted warriors contrasting with the swaying, stepping rhythm of the women in their grass skirts.

In the afternoon the war canoes gave a wonderful paddling demonstration, and then as Dago had explained, feasting was a tradition before and after a canoe was built, so there would be plenty of feasting for the community later on. 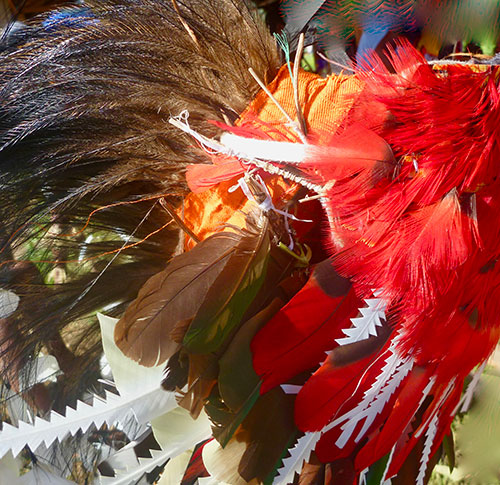 Close up of the colorful headdresses worn by many at the Kenu & Kundu Festival. Photo: David Payne, ANMM

Delivering a set of canoe plans drawn by David to Waluma East Village No 3, Fergusson Island was a challenging task undertaken by David and colleague from 2017, John Greenshields. They travelled about 50 km on a powerboat from East Cape via Esa’ Ala on Normanby Island. The village’s epoi outrigger canoe had been recorded in 2017. The village had then all warmly welcomed David and his colleagues and their parting words were that we had become part of their village and canoe’s story and were always welcome to come back. It was a very significant gesture from the Australian National Maritime Museum to this community and the owner and builder of the canoe to be able to come back and deliver a set of the drawings, even if in the end, due to the very rough landing this time around, a deckhand  had to swim the laminated copies ashore over the coral reef and hand them on. The return journey then involved an unintended over-night stop in a small village on Normanby while an oil problem was resolved, before crossing the Goshen Strait back to East Cape the next morning.

David then attended the 3-day National Kenu & Kundu Festival at Alotau, a valuable experience in seeing how the Milne Bay Province communities come together to share and show their culture. In the arena there were almost continuous displays of dancing and drumming in traditional costume, singing by groups, a tepali celebration, alongside stalls selling food and artefacts, impromptu dances as groups warmed up, and masses of Milne Bay community. On the water the war canoe and sailing demonstrations show how the different craft are handled. Along with many sailing outrigger sailau canoes onshore there two different canoe types not seen in 2017, the isuabiabi and the kebwakebwai. Working with their owner’s in the hot sun David was able to document an example of each in order to prepare plans to add to the collection.

The war canoes were stunning once again. The raid was a highlight. Assembling offshore in the distance 11 canoes came rushing into the beach, bows more or less in line, paddling and chanting in unison before warriors leapt from the craft, and their paddles became weapons.


As the trip drew to a close David returned to Port Moresby and met with National Museum and Art Gallery director Dr Andrew Moutu, and curator Dr Andrew Connelly. A tour of their exhibitions showed what a wonderful collection they have, which highlights the diverse PNG culture, this is a land advertised as over 800 languages and ‘a million different journeys’.

Being in PNG involves being on your toes at the same time as sitting back and letting it happen, Melanesian style, when it is ready. PNG contends with administrative, infrastructural, logistical, and financial challenges that affect everything, in an environment of jungle, fierce sun broken by tropical downpours that delivers a powerful combination of heat and humidity.

Flying back to Sydney was chance to wind down and reflect on what had been an action packed, vibrant and satisfying 16 days with many positive outcomes in this challenging and ultimately irresistible country, progressing the work from 2017, renewing previous contacts while making new friends and supporting the PNG community in Milne Bay.