Royal Australian Navy (RAN) Wireless radio operator, John Brown, kept a journal of his service during WWI. Brown’s journal begins just before the outbreak of World War I and concludes after Armistice. Our volunteer, Jane, has brought the story back to life through audio.

Trialing audio to unlock our collection

The calendar year is full of dates that hold significance in history. While many dates are particularly poignant for select countries there are a few with wider-reaching international significance. Remembrance Day is one of these and in 2019 marks 101 years since the end of World War I in the form of Armistice.

It was called the war to end all wars (it didn’t) and changed the course of the modern world but Rememberance Day is a moment to pause and reflect that successes as HMAS SYDNEY at the Battle of Cocos and AE2 infiltration of the Dardanelles, were performed by ordinary soldiers and sailors.

Royal Australian Navy (RAN) Wireless radio operator, John Brown, kept a journal of his service during WWI (ANMM Collection 00001711). Brown’s journal begins just before the outbreak of WWI and concludes after Armistice. Brown noted the somewhat differing perspectives of the first Armistice among the crew:

“We arrived at Colombo Nov.8th & after coaling ship let for Aden the following afternoon. On the way across I received the news of the armistice from Berlin. When I showed it to the skipper he said “Brown, I always said you would do something silly.” I did not catch his meaning and told him so. He replied “You have blasted all my hopes, there will be no North Sea for us now.” The news brightened the remainder of the trip to Aden were we arrived early on the morning of Nov. 15th.” 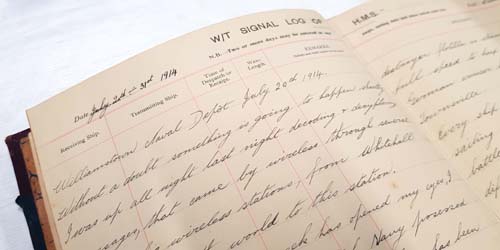 Brown vividly detailed life aboard a number of RAN vessels, which operated in the Pacific between 1914-1919. He reflects on daily matters and duties but Brown also remarks on the constant complaints of the crew, notes morale-raising activities, wild weather and diseases on-board.

He documents the speeches of superior officers, the cruel nature of warfare, the bravery of his comrades, and even the questionable nature of ships orders. The log is an extremely informative, yet personal - and emotive – account of WWI.

For these reasons, this journal was our pick for a pilot project by the Registration team and our volunteers: audio books.

Jane has been a volunteer at the Museum for over 10 years and in that time she has transcribed many documents and logs. Most weekends, she can be found guiding visitors on our vessels HMAS Vampire and HMAS Onslow.

It was her suggestion that we expand our online collections and improve its accessibility by recording some of the intriguing stories from the collection. She even offered to read a number of journals for us.

There are many logs, journals and diaries in the National Maritime Collection, covering topics like whaling, immigration and war service. Some journals detail the mundane or particulars of work or service. Others are invigorated through their dramatic content and, on occasion, are home to truly beautiful drawings.

What they all have in common is their potential ability to present the reader with insights into histories that would otherwise remain hidden.

The audio recordings of these journals – akin to audio books – gives you access to the collection which would otherwise not be possible. To hear – not just read – the stories within.

It always fills me with delight to have one of the volunteers come over and share the knowledge they have just stumbled upon. Knowledge that is often revealed in spades. Jane found the latter half of Brown’s journal very confronting: here Brown wrote of the various illnesses plaguing the crew members on patrols in Indonesian Waters.

“I will never forget my experiences of that patrol. Men began to go sick, & several showed signs of scurvy, there was no doctor onboard, he was in the Esturia, so that nothing could be done to relieve the sufferers…We met and boarded the steamer “Empire”. When the boarding party told them of our condition they couldn’t do enough for us. Her captain sent over 1 side of frozen beef, 2 carcases of frozen mutton, 2 cases of apples, a case of passion fruit, 50lbs of potatoes and 50 cabbages…He would not accept a note of demand on the Navy Office in Melbourne. He said we were worth more than he could give us, and he was sorry to see us in such condition.”

This piece of history was beyond my wildest imaginings and was something that neither Jane, the Registration team nor myself had ever expected from a vessel of the Royal Australian Navy during WWI.

What’s more, like any good read logs and journals can be extremely gripping and suspenseful, full of passing comments which can have a profound impact for piecing together fragments of history. In light of the Museum’s research on the fate of AE1, it was interesting to come across the following section on Australia’s first submarines AE1 and AE2… and how it strangely hinted that the reason AE1 was lost (at 5:30 minutes):

“The submarines go to sea every day for a dip. There is something wrong with the port engine of AE1, it fails nearly evert time they want to use it. Something will happen to her one of these days. They still go out diving in her. There is no mistake about it, the crews of those Subs are proper submarine crews. They are as mad brained as possible, fear has no place in their dictionary, they don’t know the meaning of it. They are always smiling, as merry as the crew of a battle ship.” – August 2nd 1914 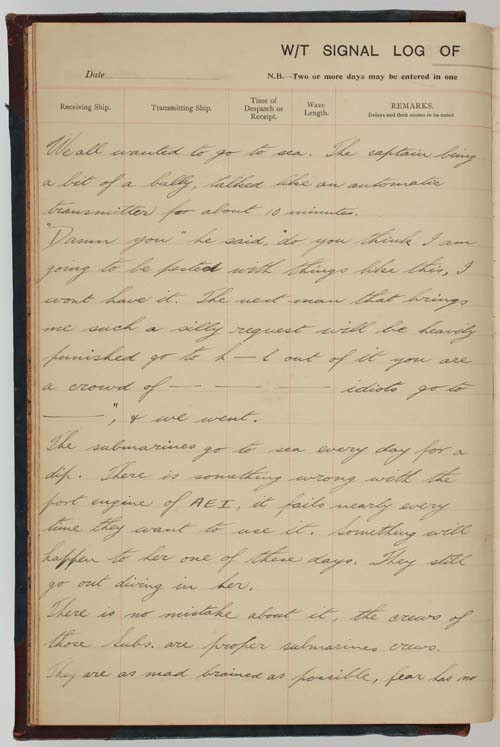 Jane has also read the ships log or journal, LOCH BREDAN. Chief Officer RR Smythe recorded his thoughts, observations and his deep longing for his beloved wife. His account is littered with illustrations and lyrical prose that detail life beyond that of Chief Officer duties. 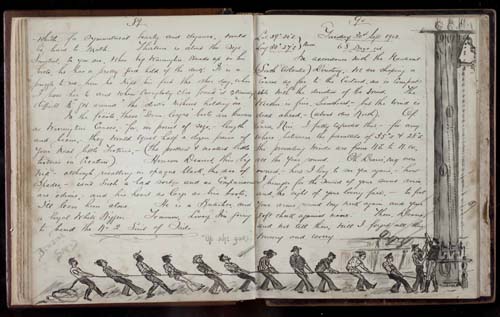 Further audio recordings will be added to the project and published on the collection website in the future, including the incredibly popular and beautifully illustrated log of the whaling barque TERROR written by Henry William Downes.

At times Downes seems to undermine the credibility of his work, commenting that;

“Bye the powers, the unfortunate being who is sufficiently infatuated to read this log (cannot remain contended like a sensible man with looking at the pictures) may take my word the work was hard, heavy & madly exciting...”. 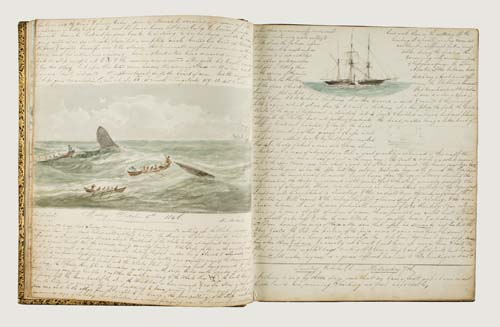 Little did he know that the daily entries into his log would prove to be an extremely informative first-hand account of the thrills, disappointment, hardships, rewards and pure monotony of being aboard a whaling vessel in 1846.

The Registration department are extremely lucky to have a dedicated team of volunteers who continue to help enhance the National Maritime Collection by transcribing, translating, documenting and rehousing the collection. I would like to say a very big Thank You to all the wonderful volunteers at the Museum, especially to those who assist us in Registration. This team currently includes:

View all posts by Nicole Dahlberg→
Posted in: Navy and defence
↑