At a glance, the two extremes of planet earth seem almost identical – cold, snowy and untamed. If you can get past those icy temperatures, however, the Arctic and Antarctic regions are completely unique.

From their fascinating wildlife to the stunningly rugged landscapes, each pole is packed to the brim with spectacular experiences. To celebrate our Virtual Reality (VR) experience of Antarctica and our free exhibition Elysium Arctic, we’ve investigated exactly what makes the Arctic and Antarctica so different, and so special.

The first difference between the Arctic and Antarctica is they’re located on opposite sides of the world. Antarctica is the earth’s southernmost and fifth-largest continent, dividing the southern waters of the Pacific and Atlantic oceans. The closest continent, South America, is a staggering 970km away from the Antarctic Peninsula, with cruises leaving from the Argentinian town of Ushuaia (often called ‘The End of the World’). Because of its remoteness, Antarctica can’t be legally owned by any country – instead, the continent is governed by an international treaty that was signed in 1959. 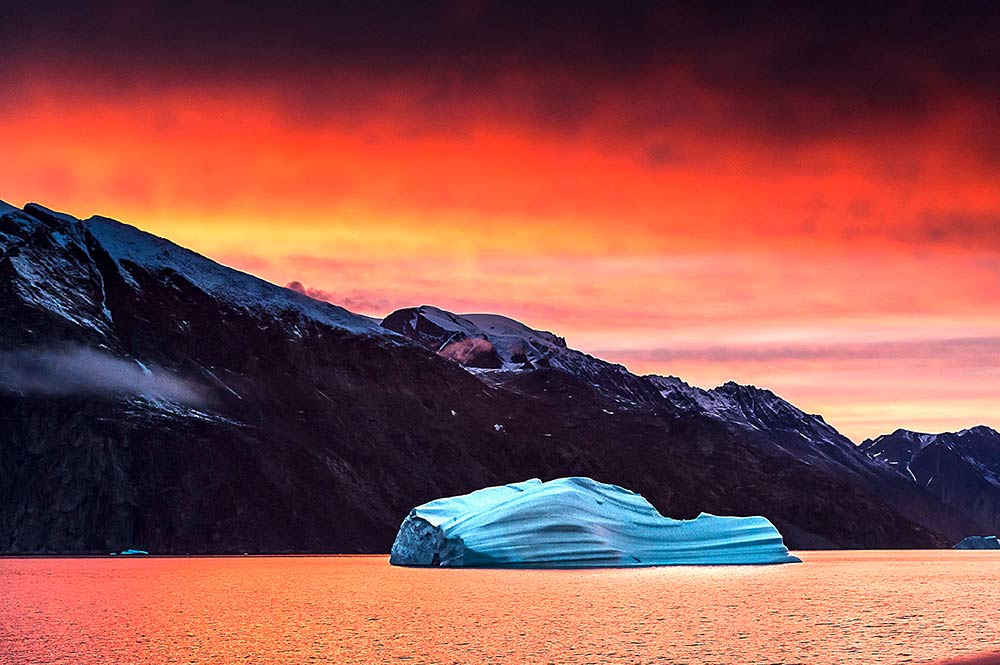 Eskimo Bukta at Scoresby Sund in Greenland by David Doubilet

To visit Antarctica, intrepid travellers have to conquer the infamous Drake Passage, one of the world’s choppiest stretches of ocean. On any given day, the unpredictable waters could turn into the ‘Drake Lake’, where the serene waters seem almost glassy, or the ‘Drake Shake’, where the crossing is so turbulent most ships chain down their furniture for safety!

The Arctic is more connected to the rest of the world – in fact, parts of the region are claimed by eight countries. The Arctic Circle, the northernmost circle of latitude, cuts an invisible line through Northern Canada, Alaska, Russia, Norway, Finland, Sweden, Iceland and Greenland. These countries are collectively known as the Arctic states. Arctic explorers usually cruise through the region, starting off in Norway’s Spitsbergen or Iceland’s Grimsey Island. Grimsey Island, a tiny outpost in the Arctic Ocean, has a population of just 61 people.

Both regions experience connected phenomena known as the ‘midnight sun’ and ‘polar night’. These conditions are caused by the earth’s axial tilt, which means that one polar region tilts away from the sun during its wintertime. During the summer solstice in the Arctic in June, the sun shines for 24 hours – imagine how much longer you can spend exploring with a midnight sun! While Arctic residents enjoy their midnight sun, the brave souls in Antarctica must face the polar night. During polar night, the sun never rises, and with strong winds and extreme cold – most Antarctic bases close for the winter. Luckily for the researchers, the earth keeps on turning, with the midnight sun period occuring in Antarctica between December and January.

When most people think about the Arctic and Antarctica, they think of icebergs and snow. While there are frequent snowstorms and plenty of icebergs through the waters of both regions, they are shaped by a unique terrain.

The Arctic is covered in snow and ice during the winter periods, with temperatures in winter plunging to -20°C in some places. There are craggy mountain peaks and majestic glaciers aplenty, alongside the rugged Arctic tundra. The tundra is a unique biome where dwarf shrubs, mosses and lichens flourish. If you dig less than a metre down into the tundra, you’ll find the soil is frozen solid. This permafrost means that no trees can grow, giving the tundra a desolate look. In the brief summer period, the tundra’s wildflowers and lichens light up the landscape by spreading an unforgettable blanket of colour over the plain soil.

Antarctica, on the other hand, holds the honour of being the windiest, driest and coldest area on the planet. Ninety-eight per cent of Antarctica’s surface is covered by ice, with three major mountain ranges dividing the landscape to the north and south. The tallest peak in Antarctica, Mount Vinson, stands at 4892m high. 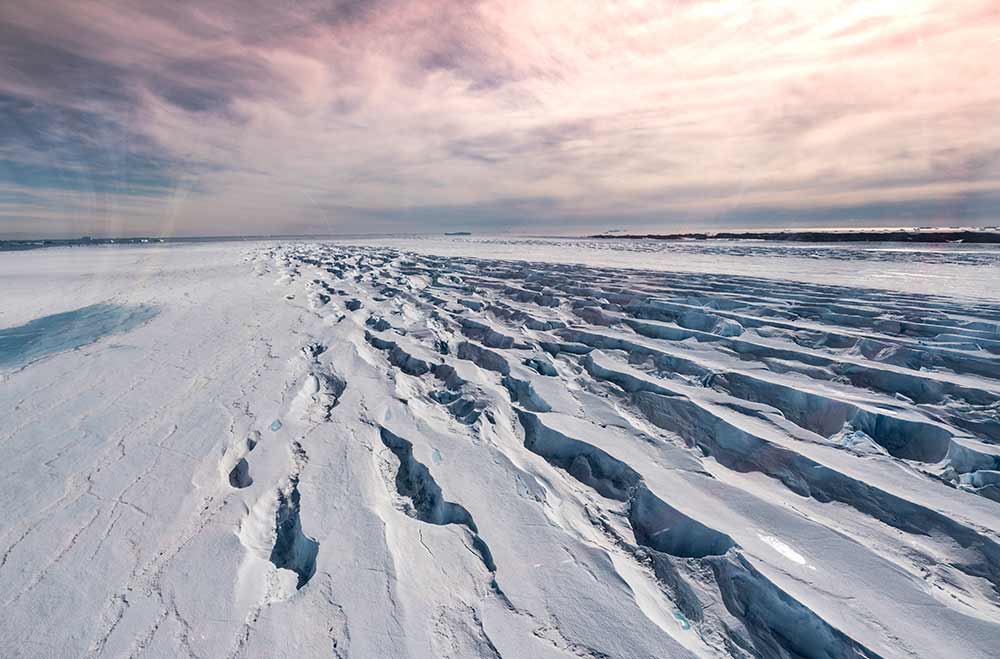 Measuring 14 million square kilometres, the Antarctic ice sheet contains almost 99% of the world’s fresh water. The temperature can dip to unimaginable lows in the winter, with the world’s coldest temperature – a bone-chilling -89.2°C – recorded at the Russian research centre in Vostok in 1983. Because of conditions like these, there are only two flowering plants that can grow on the Antarctic Peninsula – the spiky Antarctic hair grass (Deschampsia antarctica) and Antarctic pearlwort (Colobanthus quitensis). Both plants use the continent’s strong winds to pollinate, as there are no insects or birds!

The Arctic and Antarctica are home to some of the world’s most iconic creatures – the polar bear and the penguin. It’s easy to imagine these snow-loving animals playing together among the ice, but in reality they have never met in the wild.

Polar bears are native to the Arctic region, where the cool temperatures and sea ice have adapted their appearance and hunting methods. With two layers of fur and a thick layer of fat, polar bears are able to withstand the fierce winters in the region. When things get too cold, the bears can dig a cosy den in the snow and cover their nose to prevent heat loss. Their fur is also oily and water-repellent, which helps them keep warm and shake off any excess water or ice after swimming.

The Arctic is absolutely teeming with wildlife. On land, you might spot reindeer, puffins or Arctic hares and foxes. The tundra is also a breeding ground for various bird species, including the snow goose and peregrine falcon. The ocean is equally rich, with 17 types of whales inhabiting Arctic waters alone. You’ll also find walruses, narwhals and six species of seals – the polar bears’ favourite prey.

Most animals in Antarctica are semiaquatic, resting on the ice before diving into the depths below to hunt for food. Antarctica’s most famous residents, the delightfully clumsy penguins, can be easily spotted on land during the breeding season. Delicate Adelie penguins and proud Emperor penguins frequent the Peninsula, while Chinstrap, Gentoo and the eccentric-looking Macaroni penguin prefer the surrounding islands. Large populations of Fur, Elephant, Leopard and Crabeater seals dot the Antarctic coast, with elusive Weddell seals found in more remote regions.

The Arctic has a vibrant population of 4 million people, including more than 40 indigenous communities with diverse historical and cultural backgrounds. The rich knowledge held by the indigenous people help influence the decisions of the Arctic Council, an intergovernmental body of the Arctic states. Six indigenous organisations are listed as ‘permanent participants’ in the Arctic Council, sharing their expertise on issues such as biodiversity and climate management.

Antarctica, on the other hand, does not have a permanent human population – imagine spending all year round in those challenging temperatures! Besides tourists, Antarctica’s main residents are researchers, with up to 4,000 people moving into the various science research stations during the summer period. In-between experiments, researchers can enjoy the superb Southern Lights or dig for ice to turn into shower water.

There’s plenty more to discover about our polar regions at the museum! Experience a day in the life of Antarctic scientists as they research this mysterious continent through our virtual reality experience. You can also take a walk along the museum’s foreshore where you’ll find Elysium Arctic, a stunning visual journey into the wonders of the Arctic.

View all posts by Guest→
Posted in: Elysium , Exhibitions , Events