The museum recently welcomed a new addition to its Navy Gallery – a Sikorsky S-70B-2 Seahawk helicopter that served in the Royal Australian Navy (RAN) between 1988 and 2017.

The museum's Sikorsky S-70B-2 Seahawk replaces the Westland Wessex Mk 31B helicopter that has been on exhibit since 1991 and was recently transferred to the collection of the Australian War Memorial in Canberra. A derivative of the US Navy’s SH-60F Seahawk, the S-70B-2 was designed by Sikorsky to meet RAN specifications for anti-submarine warfare (ASW) and anti-surface surveillance and targeting (ASST) operations. It was one of 16 ordered for the Royal Australian Navy (RAN) and constructed at Sikorsky’s plant in Stratford, Connecticut. Upon delivery to Australia in 1988, the helicopter was given the RAN serial number N24-006 and code 875. It officially commenced service with the Fleet Air Arm’s 816 Squadron in July 1992 and was given the call sign ‘Tiger 75’. 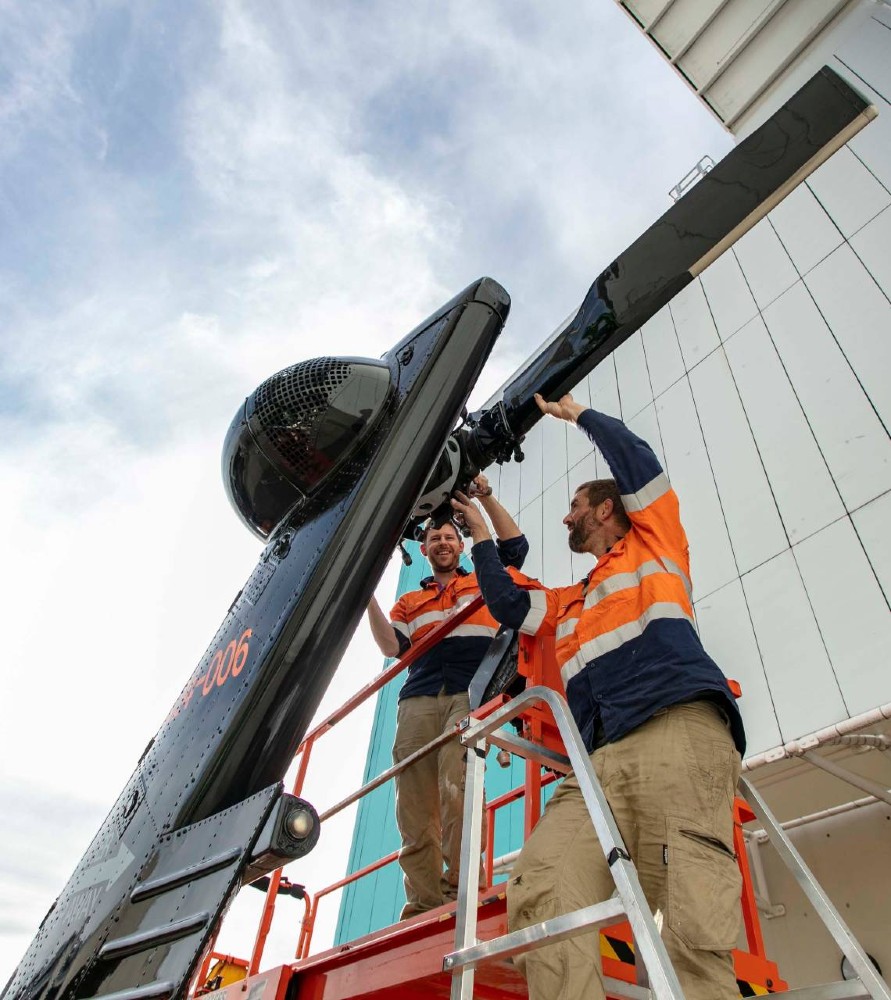 The tail rotor is attached to the Seahawk in the museum’s loading dock before installation. Image Andrew Frolows ANMM

816 Squadron was originally a British Royal Navy anti-submarine warfare squadron founded in 1939. Re-established as an RAN unit in 1948, it has operated a variety of fixed- and rotary-wing aircraft. Personnel and aircraft from 816 Squadron have served in the Second World War, Korean War, Gulf War and War in Iraq, as well as military operations in Indonesia, Timor-Leste, Fiji and the Horn of Africa. Seahawk helicopters currently form the backbone of the Fleet Air Arm, and have been the RAN’s primary helicopter asset since the late 1980s. While primarily engaged in ASW and ASST roles, RAN Seahawks can also conduct an array of secondary missions, including search and rescue, logistics support, personnel transport and medical evacuation.

The S-70B-2 model was introduced at a time when the RAN’s fleet of Westland Wessex 31B helicopters was being decommissioned, so they were in essence a next step in the evolution of the Fleet Air Arm’s helicopter inventory. Westland Sea King Mk 50 helicopters were acquired by the RAN in the 1970s to assume the anti-submarine role held by the Wessex during the height of the Cold War. Subsequently, the RAN’s anti-submarine and search-and-rescue roles were split between the Wessex and Sea King aircraft during the 1970s and early to mid-1980s. Following their introduction in the late 1980s, the Seahawk S-70B-2s assumed both roles – and others – and became the Fleet Air Arm’s ‘all-rounder’.

Over the course of its 29-year career, Tiger 75 was deployed numerous times to the Middle East and other international trouble spots, and was involved in the rescue of three crew aboard a Yemeni dhow held hostage by Somali pirates off the Horn of Africa in 2011. Most notably, it was one of two Seahawks that participated in search-and-rescue operations during the ill-fated 1998 Sydney to Hobart yacht race. Tiger 75 was parked on the tarmac at Nowra’s HMAS Albatross on the night of the disaster, from where it embarked to perform multiple search-and-rescue missions, including the recovery of surviving crewmen from the sunken sloop Winston Churchill.

Tiger 75 was also the last S-70B-2 variant to complete an operational deployment, when it returned to Albatross on 29 August 2017 after completing a nine-month tour of the Middle East aboard the Anzac-class frigate HMAS Arunta (II). It was formally retired from service shortly afterwards and repainted in its current tiger-stripe scheme (which was originally used during its delivery to Australia) in November 2018. All sixteen S-70B-2 variants have now been retired and are being replaced by the MH-60R, an updated version of the Seahawk that commenced service in 2013.

Nova Systems is a proud sponsor of the newly installed Seahawk aircraft at the Australian National Maritime Museum. A 100 per cent Australian-owned company, Nova Systems is a leading professional service provider delivering maritime capability to Australia and New Zealand and internationally. Nova has more than 450 Australian employees, including several ex-Royal Australian Navy members who remember with pride their operations, support and maintenance of Seahawk aircraft over the past 25 years.

Lockheed Martin is a proud sponsor of the Sikorsky S-70B-2 Seahawk helicopter. In developing the S-70B-2 Seahawk for Australia, Sikorsky integrated the capability of the Super Searcher radar, magnetic anomaly detector, sonics processing for both active and passive sonobuoys, forward-looking infra-red (FLIR), electronic support measures and the Mk46 anti-submarine torpedo but allowed the aircraft to be quickly configurable for utility and vertical replenishment operations both on land and at sea.

View all posts by James Hunter→
Posted in: Navy and defence , From the collection
↑