Dr Vanessa Pirotta is a pioneering marine biologist and science communicator who was recently named one of Financial Review's 100 Women of Influence for 2019. Vanessa's breakthrough research on whale snot (yes, you read that correctly) and her innovative use of technology are just some of the many reasons she is taking the world by storm.

We chatted to Vanessa to find out more about her passion for whales (and their snot), and what words of wisdom she has for young women pursuing careers in STEM.

What does it mean to be named one of the Financial Review's 100 Women of Influence for 2019?

This means so much to me! It's a great honour to be listed amongst an amazing group of influential women from Australia. It is also a privilege to be recognised as a marine scientist and to highlight the importance of science, technology, engineering and maths.

What sparked your interest and passion for whales?

I've always been passionate about whales ever since I was a little girl who grew up on a farm – I have publicly acknowledged this in my recent TEDx talk (see below) where I talk about my pet cow Zac. I also think its the way they look and their interesting lives that fascinates me. People such as Sir David Attenborough and Dr Sylvia Earle were also visible and influential role models who spoke about whales and the ocean when I was growing up.

Why did you decide to collect whale snot?

I never thought that I would be collecting whale snot for my PhD. I was always wanting to make sure that my research was applicable and conservation based. Studying whale health was something that I was very much interested in. Lung bacteria or whale snot soon became the focus of my research and I wanted to be able to collect it in a way that was safe for humans and whales. This resulted in the colourful collaboration I created with industry and science to harness the power of emerging technologies to create waterproof drones for collecting whale snot. Four years later and whale snot is a common biological collection for scientists around the world.

What can whale snot tell us about the ocean and its health?

Whale snot can provide scientists with a snap shot of whale health. Its basically a juicy biological mixture of health information containing bacteria, hormones and DNA (and much more). We can use the baseline information of bacteria that we are collecting from the east coast Australian humpback whale population with other whale populations around the world. We can also compare these samples with sick whales and collect samples over time to monitor changes in population health.

We also were the first to collect viruses from whales using a drone. We collected viruses from Antarctica that we collected off Sydney. This means at a microscopic level, we may be able to detect changes in whale snot over time that could indicate changes in our ocean. For example, warming oceans may allow certain heat loving bacteria to thrive while others may not be able to do so. 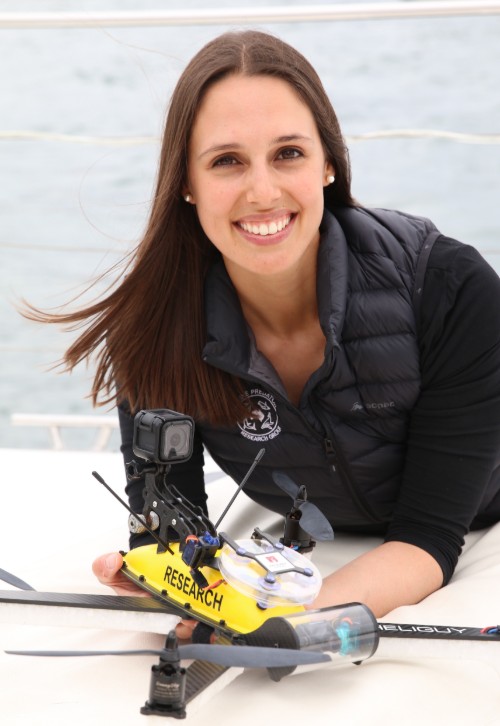 What are some of the challenges you experience in collecting whale snot?

Where do I start? There is always the concern that the weather might not be okay. You need good calm seas. Sometimes you could have great weather and might not be able to find any whales. Sometimes the drone is ready to go but it may have little power remaining. Sometimes the drone is in the right position and a whale fails to take a decent breathe that we can sample from. There are always challenges but when everything comes together its great!

What other women in science inspire you?

Dr Sylvia Earle is amazing. I was so fortunate to have met her recently at the launch of Elysium Arctic at the Australian National Maritime Museum. I told her I had just finished my PhD in marine science and she gave me a high five! That was an incredible moment. I love her powerful messages about how the ocean is changing. Her delivery of these messages are incredibly respectful, powerful and from the heart.

What advice do you have for young women who are trying to pursue careers in STEM?

Just go for it! You acquire so many transferable skills in any STEM career. Embrace the opportunities that are out there. Follow your passion into something that you love and don't be afraid to ask questions and contact people who might be able to help you. You just never know where a career in STEM can take you.

View all posts by Laura Signorelli→
Posted in: Oceanography
↑