June 15 and 16 was perfect weather to be out of the city, and I was kindly invited by Deb Swan, Aboriginal Cultural Heritage Officer with RMS NSW, to attend an Aboriginal Community Cultural Camp at the Yula-Punaal Education and Healing Centre located at Mandalong on the NSW Central Coast, where traditional nawi tied-bark canoes and coolamons were made for community use at future events. This is third year these weekend camps have been held, and it has been a privilege to attend all three to help with the nawi canoes.

In 2017 it began as a small group of five us, led by Uncle John Kelly from Kempsey, and we made two canoes from blue leaved stringybark bark that had been supplied already stripped by Forest NSW, collected from plantation grown trees in the Watagan State Forest and sustainably harvested. Community joined us on the Sunday and helped make rope.

In 2018 it grew, and community was invited to participate  with us for both days. On the Saturday,we all went up to the Watagans with permission to take a bark from a standing tree. Cut under Uncle John Kelly’s direction it was formed it into a big 4 metre long nawi back at Yula-Punaal. On the Sunday we were able to visit the Warre Warren cave site on Aboriginal managed land near Mangrove Mountain. It was a very spiritual and special experience to be allowed onto this site.

For 2019, once again the wider community was invited to be with us and included Aunty Sugar, along with the core members of the nawi team - Uncle John Kelly, Dean Kelly, Richard “Cooma” Swain, Terry Kelly and myself. Layne Brown came to learn the process, while Jan and Chris Rasborsek were invited by Dean to film the weekend. 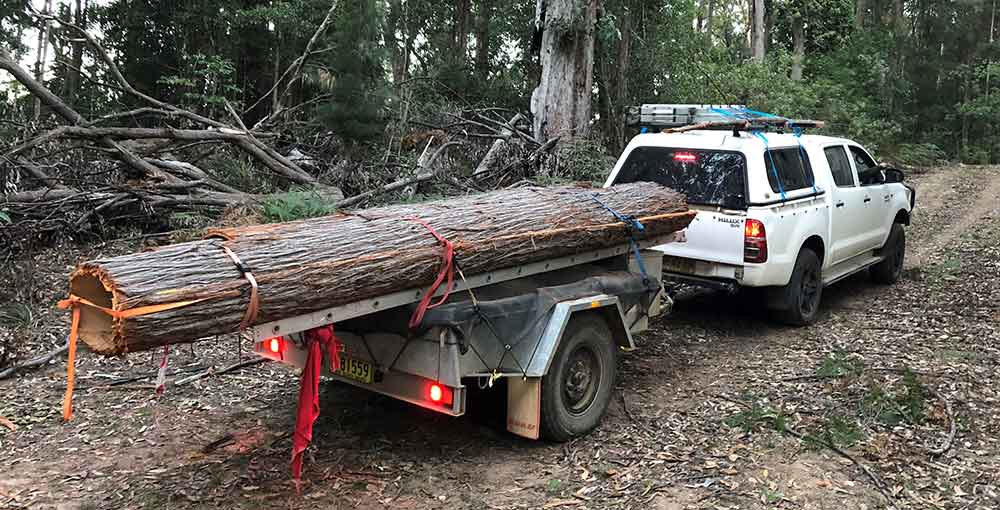 The bark rolled up for transport. Photo: David Payne.

On Saturday morning, with Forestry and Darkinjung Local Aboriginal Land Council permission again, we returned to the Watagans in convoy, but had to negotiate a fallen tree on the track, not an issue with practical knowledge and tools in abundance. Once on site, scouting for potential trees singled out three more from the 2018 site.

Ceremony comes first, to let the country, its traditional owners and their spirits know we are here and understand our intentions to use the bark for cultural purposes.  Lead by Uncle John and Dean we held a smoking ceremony for all attending and then smoked the first tree to be used. This ceremony settles both the area and our group into the right frame of mind to carry out the work carefully and correctly. 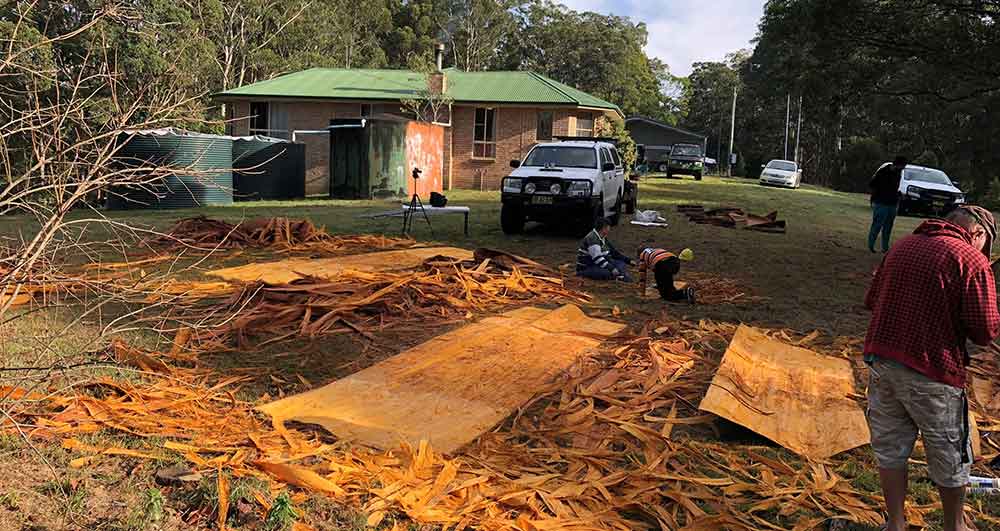 Terry and I made a cut with hatchets around the base; two ladders were then set up and secured. Cooma and Dean went up to cut the top edge over 4 metres from the base cut, before running a saw down the middle. We then gradually peeled each side back around the tree, working at the base with hatchets as levers, while Terry and I worked the top section back together using long poles we had cut and sharpened.

Within ten minutes from getting an edge to lift, it was off, held from falling down by a rope put around the tree. The bark peels gradually revealing the moist cambium layer, then it smoothly pops off the last third of its surface area under its weight and the subtle tension applied as it peels away from the trunk.

Having agreed on a second tree, Uncle John kindly gave me the coolamon with its smoking eucalypt leaves to be walked around it three times, anti-clockwise, and leaving the circle at the same point you come in. With the same group process, although this time Cooma cut all the top edge in a big effort, we had this bark off in just over 20 minutes from starting  the base cut. Experience and teamwork were showing.

Meanwhile the others had kept safely away from the sharp tools in use. Aunty Sugar was in her element, cooking up soup, Johnnycakes (damper) and tea; the kids were enjoying the freedom and escape of the forest, and the women went cutting coolamons. They also performed a healing ceremony on the trees after we had finished cutting our bark.

Before leaving, we felled the first tree, and took the remainder of the bark for a third canoe and other uses, then drove out for an after dark return to Yula-Punaal.

It’s Sunday and some of us are up before sunrise, coffee and breakfast to begin the shaping. The smooth inside surface is the outside of the canoe, so it had been laid down that way on the moist ground the night before. The outer layers have little strength, but the inner golden yellow layers are living material and form very strong fibres, giving the nawi its strength and spirit.  So  we peel the bark back in layers and  once the yellow is  revealed, we just need to thin the ends down further so that with heat, they will fold together to pull the nawi up into shape. With three big barks from 3 to 5 metres long and two models a metre long to shape it was not until late morning that we were ready to smoke them individually from a fire we lit with firesticks, and then heat the ends over the bigger open fire. 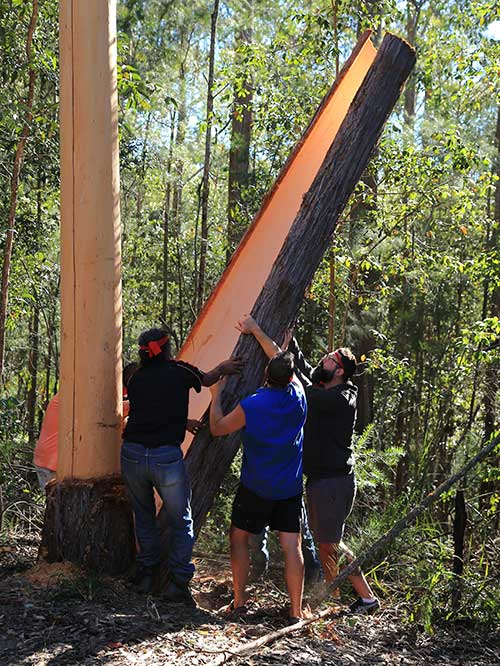 The folding is a critical process, as it will guide the shape of the ends through to the whole nawi. We want the ends to rise up so it will ride over waves. All the nawi achieved that, but each has its own organic shape dictated by the temperament in the bark fibres and our workmanship. We are creating a fan shape of folds, but sometimes the fan becomes more of a roll as the folds slide over each other. The smallest one was the hardest to fold, and the 4-metre nawi ends both slid around a bit, but rose up well for a great profile shape. The big 5-metre nawi was the best, both ends are three ‘v’s tightly fitted, vertical, each panel about the same depth, and a big rise up from the keel. This was ideal, and look closely - one end has Cooma’s signature, his single handed, jagged edge cut  made with an impressively  sharp hatchet,  reaching  high as he made his way round the tree on the ladder.

As the men worked on the nawi, the women gathered to conduct their work as well. Deb, Aunty Sugar, Calita Murray, Rachel Shields, along with Rachel Cavanaugh, Mary Franks, Kasey Hoare and their younger families all cut a number of coolamons or their use from the spotted gums nearby, and undertaken with appropriate ceremony.

The nawi all had their individual shape and identity, held in place by pegs at the ends, branches in the middle and temporary rope ties. Left inside a building to dry out, we will return later to finish them off with bark rope and bark strips to secure the craft’s sides and ends. Any cracks in the folds are sealed with resins and then we should have three nawi ready to float.

The 5-metre nawi inside to dry out. Photo: David Payne.

This was a hugely satisfying gathering for all involved that extended what we had achieved on the previous camps. It brought together a strong community who shared ceremony, knowledge, experience, stories, friendship, and the hard work involved in shaping all these traditional objects for future use.

I would like to extend my thanks and respect to elders Uncle John Kelly and Aunty Sugar, to Deb Swan and Dean Kelly who coordinated the camp once again, and all those who shared this wonderful weekend.

View all posts by David Payne→
Posted in: Arts and Culture , Indigenous
↑