An unusual new addition to the National Maritime Collection

The death of Captain Cook may seem a bizarre scene for a tea tray, but such an item was the perfect gift for wealthy industrialist Henry Bolckow. His grand home Marton Hall was built on the site of James Cook’s birthplace, and this connection inspired Bolckow to amass one of the finest Cook collections ever assembled. 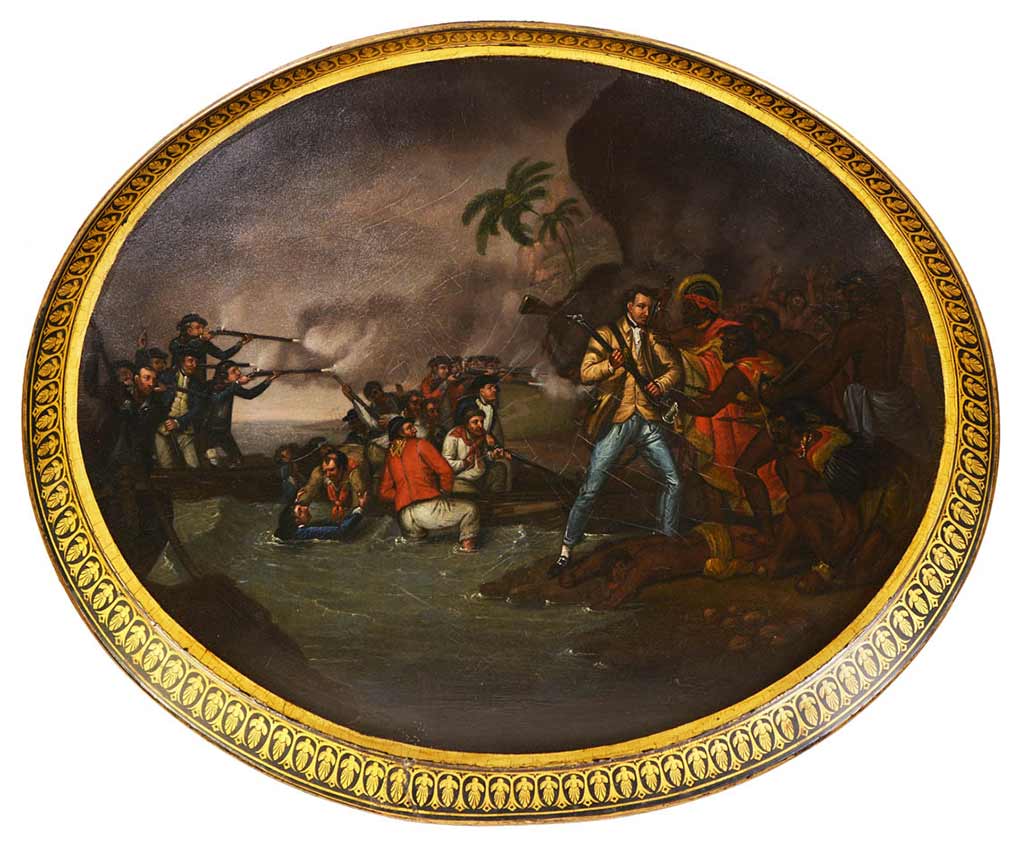 Japanned papier-mâché tea tray bearing the patent mark of Henry Clay and painted with a scene of the death of Captain Cook. Image Andrew Frolows/ANMM


"The tray was a particularly apt gift to Henry Bolckow given his known collection and interest in Cook memorabilia."


HENRY WILLIAM FERDINAND BOLCKOW (1806–1878) was born in Mecklenburg in Prussia (now northern Germany), but migrated to England in 1827. In 1841 he established the first iron foundry and rolling works in Middlesbrough, UK, in partnership with John Vaughan. Between 1827 and 1868 the population of Middlesbrough grew from less than 100 to more than 40,000, and when the town was gazetted as a municipality in 1853, Bolckow was elected its first mayor. In 1868 he was elected a Member of Parliament. His Yorkshire residence and property, Marton Hall, incorporated the birthplace of James Cook. 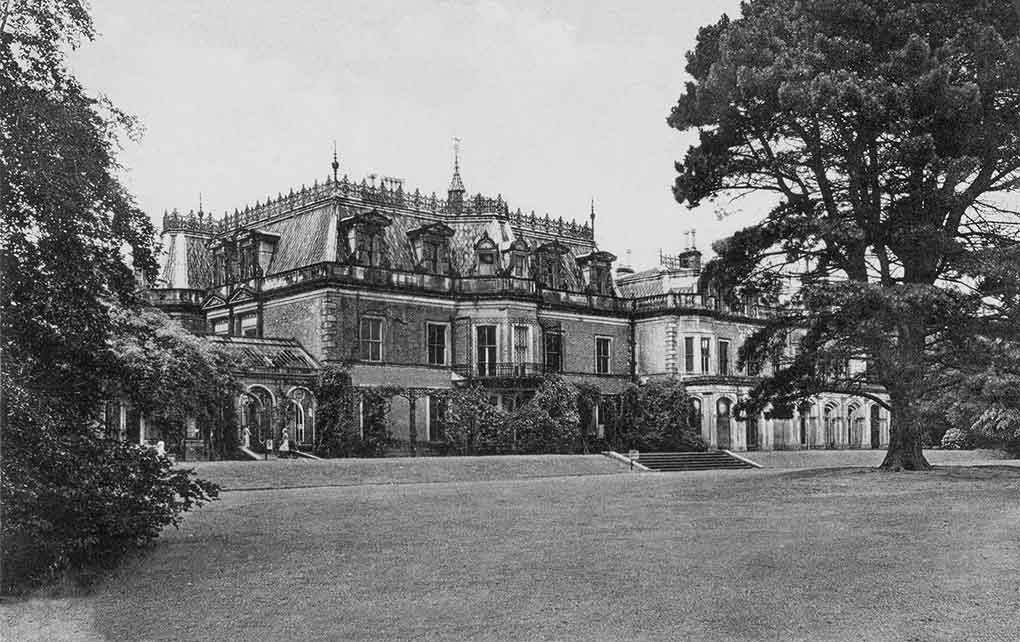 Marton Hall, home of Henry William Ferdinand Bolckow. It was already due for demolition when fire swept through it in 1960. The remains have since been demolished. Image courtesy www.lostheritage.org.uk

Living on the site of Cook’s birthplace inspired Bolckow – already a serious art collector – to assemble one of the world’s finest Cook collections. In 1868 he purchased Cook’s original manuscript journal of the Endeavour voyage as well as the Admiralty’s secret instructions. In that same year several works of art from his collection were displayed at the National Exhibition of Works of Art, Leeds, including a portrait of James Cook by John Webber, now held by the National Portrait Gallery, Canberra.

In 1923 a small number of Cook-related objects from H W F Bolckow’s collection were sold by Sotheby, Wilkinson and Hodge. Cook’s Endeavour journal and letter book (with the Admiralty’s secret instructions) were bought by the Australian government. Now designated Manuscripts 1 and 2 (MS 1, MS 2), the journal and letter book are regarded as foundation documents of the National Library of Australia.

Japanned papier-mâché tea tray bearing the patent mark of Henry Clay and painted with a scene of the death of Captain Cook. Image Andrew Frolows/ANMM

The tea tray is made of papier-mâché and bears an impressed patent mark of Henry Clay, a noted manufacturer of papier mâché products located at 19 Newhall Street, Birmingham. In 1772 Clay patented a method of pasting together sheets of paper over metal moulds to create a range of waterproof and heat-resistant panels used for tea trays, card and dressing tables, window shutters, coaches, mantle-pieces, tea caddies and elegant furniture. The process was known as ‘japanning’ because it produced a shiny black surface that resembled Japanese lacquerware. Clay’s patent stated that the material could be sawed, planed or turned like wood, but quite apart from its practicality and durability, many of his works were extremely elegant, notably his tea caddies, which often incorporated Wedgwood jasperware decorative medallions.


"The announcement of Cook’s death was the focus of a national outpouring of grief, expressed through a variety of theatre, poetry and art." 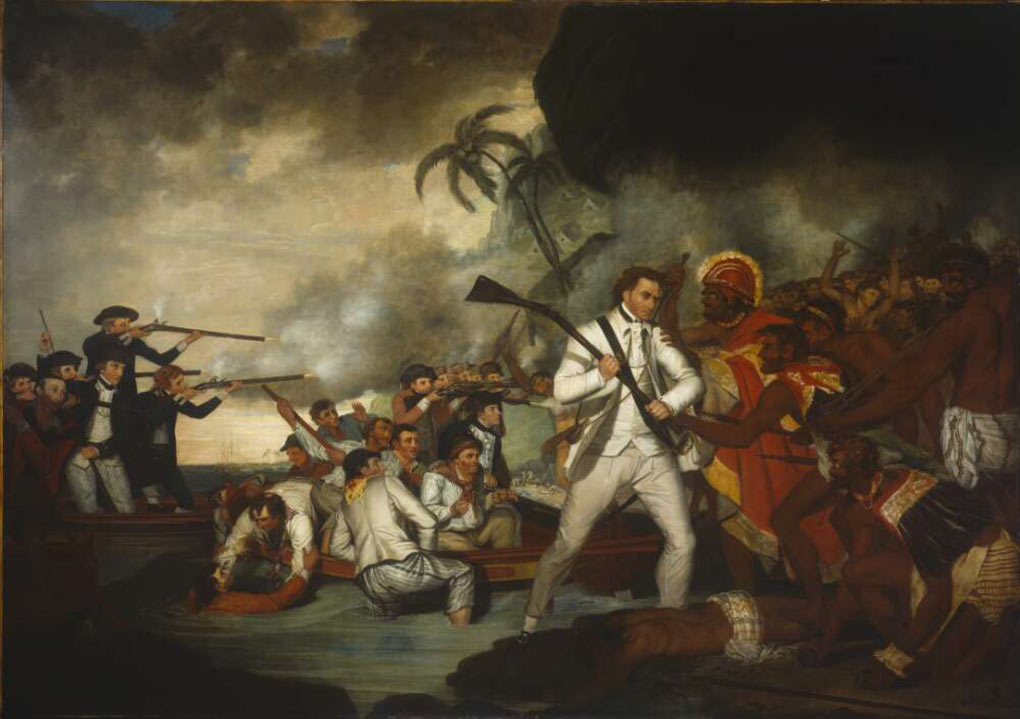 Clay was highly successful, employing more than 300 workers in his Birmingham factory. He obtained royal patronage after presenting a sedan-chair made of papier-mâché to Queen Caroline, allowing him to trade as ‘Japanner in Ordinary to His Majesty and His Royal Highness the Prince of Wales’. Among his many employees was artist Edward Bird (1772–1819) who, after having been apprenticed to Henry Clay at the age of 13 in 1785, moved to Bristol in 1794 to pursue his artistic career.

There, he became the leader of a group of artists known as the Bristol School. He was known as an historical painter and was elected a member of the Royal Academy in 1815. It was Edward Bird who painted the death of Captain Cook on the tea tray. The scene is based on a painting (now held by the National Library of Australia) produced by artist George Carter in 1781, only months after the return of Resolutionand Discovery to England in October 1780 and the announcement of Cook’s death. This was the focus of a national outpouring of grief, expressed through a variety of theatre, poetry and art. Demand was such that Carter produced a second large oil in 1783 (now held by the Bernice P Bishop Museum, Hawaii), and an engraving based on the painting in 1784.

Which brings us to John J Bagshaw, who gave the tea tray to Henry Bolckow. John James Bagshaw (or Bagshawe; 1835–1875) was born in Sheffield and established the Thames Steel Works there, manufacturing cast steel piston rods, shafts, forgings and a range of tools. He was listed in the 1867 Institute of Mechanical Engineers Proceedings as a Member since 1865.

Provenance
Given our knowledge of the above, the japanned tea tray by Henry Clay, with a scene of the death of Captain Cook painted by Edward Bird, after the work of artist George Carter, was produced between 1785 to 1794, probably in the latter part of that period, after Bird had honed his skills to a high level. 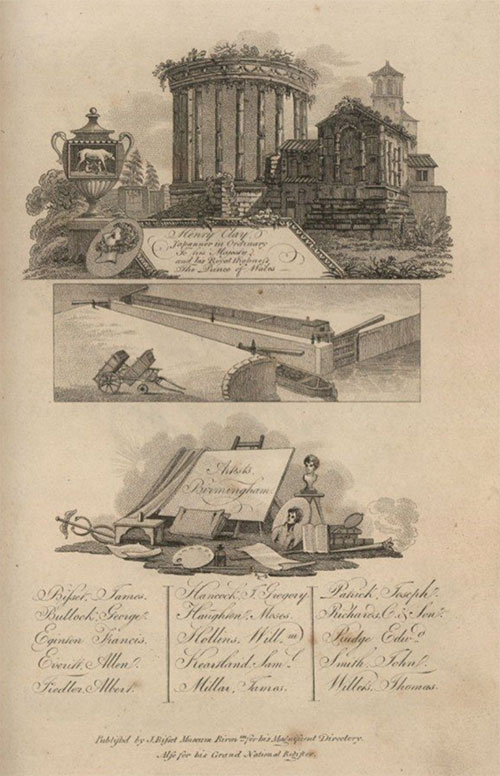 Advertisement for Henry Clay in Bissett’s Magnificent Guide or Grand Copperplate Directory for the Town of Birmingham, 1808


It is unknown who owned the tray before John James Bagshaw acquired it in the mid-19th century, but the tray was a particularly apt gift to Henry Bolckow given his known collection and interest in Cook memorabilia. Bagshaw and Bolckow were both deeply involved in the iron and steel industries centred in the north of England, both shared an interest in art, and both were contributors to the National Exhibition of Works of Art held at Leeds in 1868, where one of Bolckow’s works exhibited was a portrait of Captain Cook by John Webber. In the same year, Bolckow purchased the Endeavour journal and Admiralty secret instructions.

Henry Bolckow built Marton Hall in the late 1850s. Although the inscription on the back of the tea tray is undated, given the multiple associations between the two men around 1868 and Bolckow’s newly acquired political position, it is likely that John J Bagshaw gave the tray to Henry Bolckow between 1868 and his own death in 1875.

Fundraising to assist with the purchase of this important tea tray will be the focus of our end-of-financial year campaign.

View all posts by Nigel Erskine→
Posted in: Arts and Culture , From the collection
↑