Shipwrecks in the deep blue sea

The CSIRO Marine National Facility (MNF) blue-water research vessel RV Investigator is rewriting history as it pieces together the most complete modern map of our territorial waters. The museum also has a keen interest in exploring the oceans. Exhibitions like James Cameron: Challenging the Deep feature current scientific and environmental issues and activities, as well as cultural understandings of the ocean sphere. As the museum's inaugural Curator of Ocean Science and Technology, I'm joining the Investigator’s voyage from Brisbane to Hobart, 14–21 May 2018. 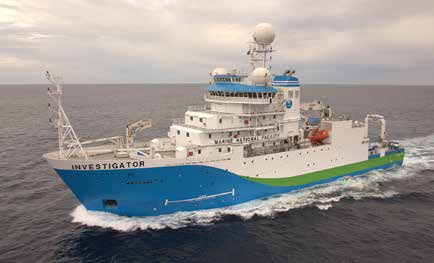 My aims were to assess the vessel and its capabilities, to observe the deployment of equipment and results, and – since I am also a maritime archaeologist – to check out a few shipwrecks en route.

In 2017, Investigator’s crew collaborated with the Northern Territory government to conduct a targeted multi-beam sonar survey for the wreck of SS Macumba in the Arafura Sea, off Arnhem Land.

Macumba was a 2,526-ton steel steamship built in 1919 by Charles Hill & Sons, Albion Shipyards, Bristol, UK. The vessel was purchased in 1920 by the Australian United Steam Navigation Co (AUSN) and operated as an interstate freighter in the AUSN east coast timber and coal trade.

In August 1943, Macumba was attacked by two Imperial Japanese Navy seaplanes while transporting a cargo of general supplies from Sydney to the military port of Darwin. Despite return fire from Macumba and escort vessel HMAS Cootamundra, the Japanese aircraft made a direct hit on Macumba, striking the engine and boiler rooms. The vessel lost power and began taking on water. Within an hour, the crew was forced to abandon ship, which went down stern first. 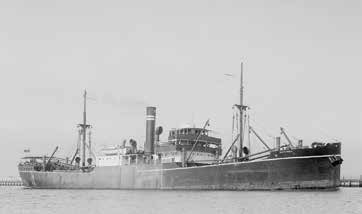 The Investigator survey collected multi-beam echo sounder (MBES) and drop camera images of the shipwreck and surrounding site, which were publicly shared. As a result, Macumba is now protected under the Commonwealth Historic Shipwrecks Act 1976.

Buoyed by their success, the MNF notified the Victorian government of an unknown shipwreck located during a routine bathymetric survey by Investigator near Crocodile Rock in Bass Strait. Images and location were shared with Heritage Victoria and the site inspected by the Maritime Archaeological Association of Australia (MAAV), which identified the wreck as that of iron barque Carlisle. 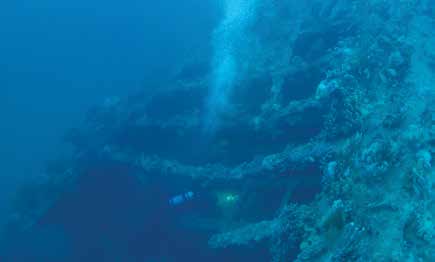 On 6 August 1890, the 1,121-ton Carlisle struck a rock south-east of Wilsons Promontory. Carlisle was en route from Melbourne to Newcastle to load coal before continuing towards South America. After striking the rock, the crew manned the pumps, but to no avail; the vessel was abandoned after a two-hour effort. The captain and crew managed to escape in two boats, but became separated in the darkness.

One boat made it to Ninety Mile Beach and the survivors were rescued by locals. Those in the second boat landed at Cliffy Island and were later rescued by the steamer Lady Loch. An inquiry into the loss exonerated the captain and officers of blame, finding that Carlisle stuck a recently discovered rock that did not appear in Admiralty charts at that time.

The information gathered by Investigator’s remote-sensing survey indicated that the site is in good condition. The initial photographic inspection by MAAV technical divers also provided significant information. Now that the wreck has been found, Heritage Victoria hopes to complete detailed, accurate mapping and interpretation of the site for long-term management and preservation. Carlisle is protected under the Historic Shipwrecks Act.

RV Investigator is a highly flexible platform with a capacity to accommodate a variety of different research projects on a single voyage. The Marine National Facility invites researchers to explore the opportunities for their research that are offered by the vessel’s capacity and capability. Prior to the May 2018 transit voyage, the museum’s maritime archaeologists reviewed locations for known and unknown shipwrecks, and identified two sites that could be surveyed with little deviation from the voyage track: HMAS Pioneer and HMAS Encounter (I).

Pioneer and Encounter are located relatively close to the entrance of Sydney Harbour, but in deep enough water that Investigator would easily be able to acquire MBES imagery of one or both sites. A 2010 CSIRO hydrographic survey of Pioneer led to its 2014 investigation by the wreck-diving organisation NSW Wrecks, but Encounter had not been documented with comprehensive sonar imagery. It was proposed that Investigator conduct close-order MBES sweeps of one or both sites, with the goal of obtaining a solid three-dimensional picture of what survives.

Both vessels were scuttled after World War I, and are significant because they are remnants of some of the larger vessels that constituted Australia’s first national fleet. Following consultation with the New South Wales Office of Environment and Heritage, Pioneer and Encounter were confirmed as the two primary sites of interest within the transit area.

HMS Pioneer was built at Chatham, UK, in 1900 and commissioned as a Pelorus class light cruiser by Britain’s Royal Navy. Pioneer was recommissioned for service on the Australia Station in 1905, and used as a drill ship by both the Australian Commonwealth and Imperial British governments. In 1912, the vessel was transferred to the Royal Australian Navy (RAN) as a gift from the Admiralty. Pioneer participated in blockades, captured enemy vessels and is purported to have fired the most shells in anger of any RAN vessel during World War I.

Following its return to Australia in November 1916, Pioneer was used as an accommodation ship at Garden Island in Sydney. Its stripped hull was scuttled off Sydney Heads in 1931. The surviving hull structure shows clear evidence of the reduction processes employed to strip the vessel before it was scuttled.

The Challenger class cruiser Encounter joined the Royal Navy’s Australian Squadron in 1905. Commissioned into the RAN in 1912, it was referred to as the ‘foster mother of the Royal Australian Navy’. Encounter was Australia’s first cruiser and served overseas and as a training ship. Paid off in 1920, it was renamed Penguin and used as a depot and accommodation vessel at Garden Island naval base. It was stripped and scuttled off Bondi Beach on 14 September 1932, and is a popular technical dive site.

HMAS Encounter was stripped and scuttled off Bondi Beach on 14 September 1932, and is a popular technical dive site 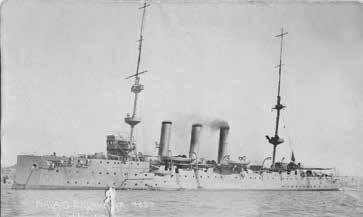 Investigator carries its acoustic instrumentation within a gondola mounted 1.2 metres below the hull. The ship deploys a Kongsberg EM122 MBES and a shallow-water Kongsberg EM710 high-resolution MBES. Multi-beam echosounders send acoustic signal beams down and out from the vessel and measure both the signal strength and time of return on a receiver array.

Data are transmitted by the receiver to the operations room for real-time processing. These data provide topographic information, and register features within the water column and on the seabed. As well as general location, it is important to know vessel dimensions, as shape and size can be spotted in the raw MBES point data, providing initial confirmation that the site has been located.

Due to time constraints, we only had a few hours to locate and survey both sites. Hydrographer Matt Boyd and I were positioned in front of a bank of computers in the operations room, scanning the screens for blips in the raw point data. As we had accurate coordinates, provided by the New South Wales Office of Environment and Heritage, both sites were relocated and surveyed within the allotted time, a great result for the team. 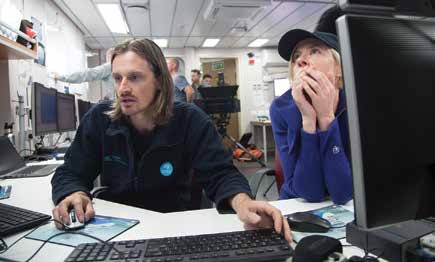 Investigator’s capabilities are now being utilised to work with state and national agencies and in locating and surveying Australian shipwrecks in deeper waters. This April, I will be voyaging on Investigator to search for more shipwrecks. I can't wait to share the insights from the trip, stay tuned!