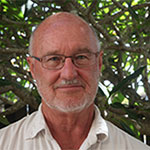 Investigating the mind of a shark

Richard Gates is fascinated by the relationship between brain function and animal behaviour. As a neuroscientist and neuropsychologist, he has a particular interest in sensory systems, but it was his childhood on the North Coast of NSW that sparked his curiosity in sharks.

So, what do we know about these apex animals?

1. Sharks are not the stupid, blindly-swimming creatures of popular mythology

Sharks are beautiful, complex creatures with sophisticated brains and suites of behaviours shaped by evolution and learning experiences that need to be better understood by science, the public, and those making public policy about sharks.

2. Top of the food chain

The risk of being attacked by a shark is rare, with many other creatures more likely to kill you. Yet we don’t kill all horses because humans are often killed in horse-riding accidents. Next time you take a swim think about the millions of folks who haven’t been taken by a shark! Sharks are ‘apex’ creatures at the top of their food chain looking for some tucker and you may be part of a random 'taste test' but this is highly unlikely. I’ve been swimming in the ocean for nearly 70 years and so far, not a bite! Perhaps that says more about me and shark food preferences!

"We need to develop a better understanding of the relationship between shark behaviour and shark attacks."

While we know that sharks are very capable of learning and remembering, our understanding is still relatively underdeveloped about the learning capacity of sharks and differences in learning capacity among different shark species. All sharks are not the same. We have yet to understand the full behaviour repertoire of most species. Studying their sensory systems should give us clues about different species' behaviour.

Part of my interest in sharks relates to the ocean conditions where shark attacks occur and how the poor health of our coastal river systems may be contributing to this problem.

Some of our large coastal rivers, such as the Richmond River in Northern NSW, are badly polluted, and some of the pollutants may be attracting sharks and priming them for feeding behaviours - changing their behaviour patterns through the effects of the pollutants.

We need to develop a better understanding of the relationship between shark behaviour and shark attacks and coastal pollution. I worked with filmmakers for the National Geographic Channel several years ago on a program exploring this hypothesis.

View all posts by Kate Pentecost→
Posted in: Events , Sharks , Arts and Culture
↑