HMB Endeavour is currently sailing south, from Sydney to Hobart, for the Australian Wooden Boat Festival.

It was a busy training day with the voyaging crew. For many, this is was their chance to find their way around the ship.

Motoring slowly past the iconic Sydney Harbour Bridge and Opera House, the watch teams practised climbing aloft. It’s an exhilarating experience, climbing up the shrouds, across the platform, and down the shrouds on the other side, with one watch team loosening the fore course ready for departure.

A well-earned rest was had by all, at Rose Bay, anchorage for the night. Endeavour was joined by numerous curious pleasure craft and a sail past by Southern Swan and Soren Larsen. 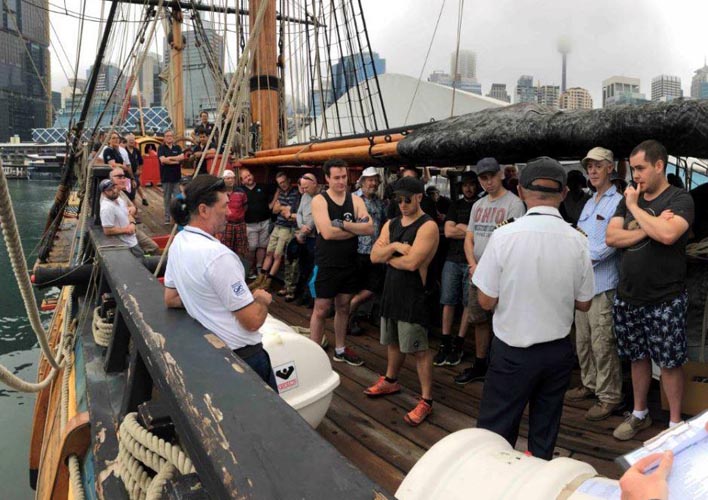 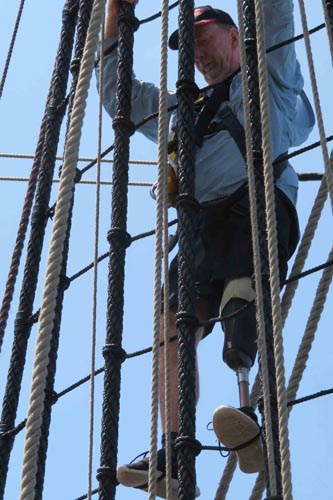 Day 2: The wind in the sails

With everyone ready and eager, the sailing adventure began. Favourable south to north easterly winds swept the ship and the crew down the beautiful south coast of  New South Wales.

Voyaging under fore and main courses at dawn, and later joined by fore topsail, topgallant, and spritsail, which made an impressive stack at the head of the ship. With four sails held high, Endeavour sailed a swift 7 to 8 knots all day.

Endeavour sailed a swift 7 to 8 knots all day.

The crew are still getting used to the conditions on-board, and seasickness is inevitably a feature for some. But by the end of day two, most were gaining their sea legs and all on-board enjoyed getting to know each other, raising a smile happy to be out in the open sea.

At dusk a brief storm passed over, afterwards the wind slackened so the engines were started to keep us trailing southward. By night fall Endeavour was off Bateman’s Bay. The crew then retired in quietness with the ship under sail as she had been all day. 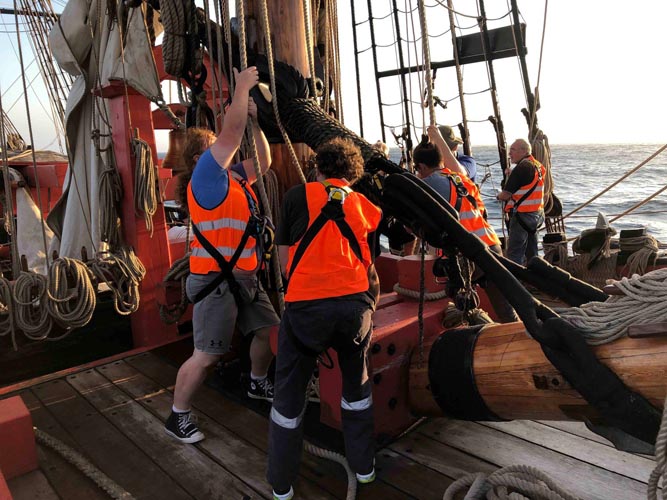 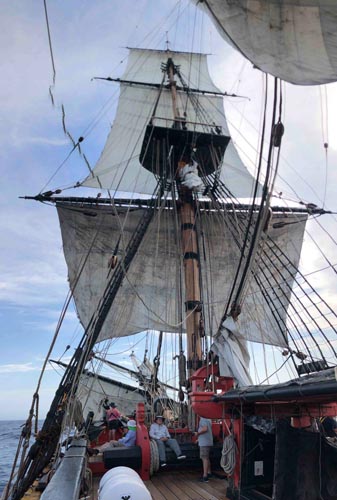 After the winds freshened in the morning, the crew set sail with the southbound Endeavour motor-sailing for the day.

In the afternoon the sails were furled again, under the gloom of a stormy sky. A thunderstorm emerged with heavy rain causing us to anchor using a bower anchor, two lines and the capstan. With thunder and lightning, it truly was an eighteenth century sailing experience!

A thunderstorm emerged...with thunder and lightning, it truly was an eighteenth century sailing experience!

Twofold Bay, Eden, was a festive experience: Fred, the Cook, had the honour of the first birthday among the crew to be celebrated during the voyage. Cake in the galley is always a joyous occasion.

With anchor watch in place, all crew were provided lighter duties which allowed everyone to catch up on some much needed sleep. 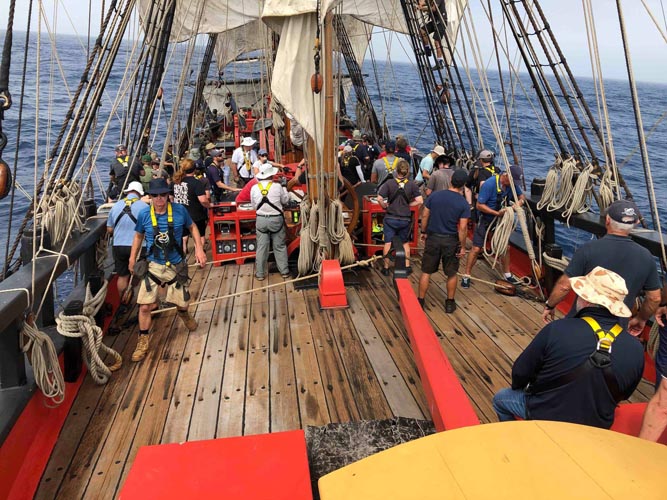 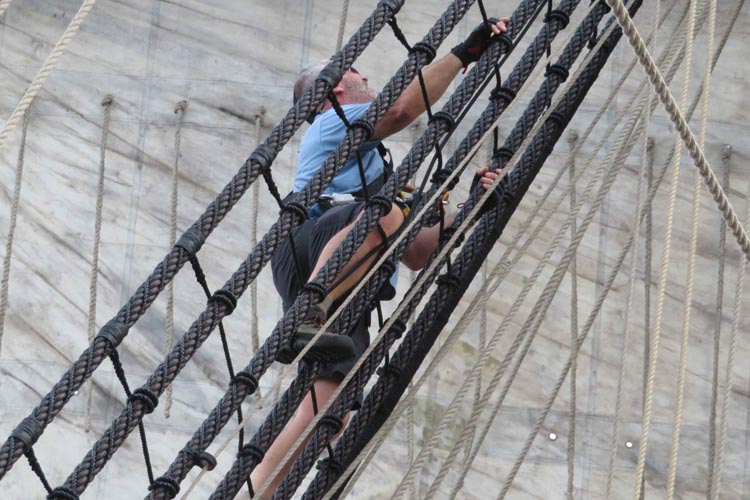 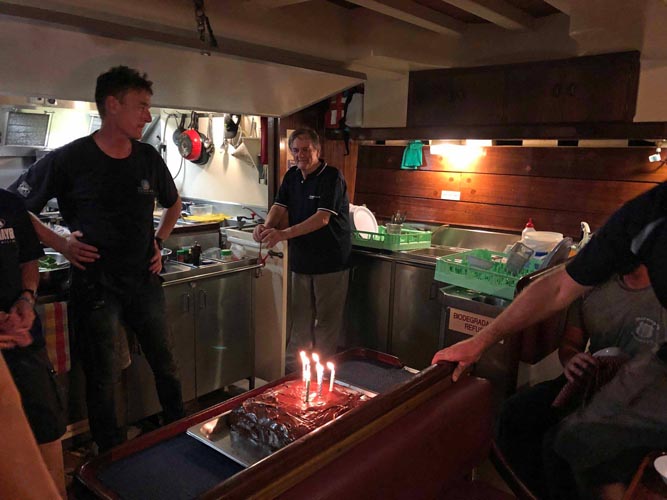 The birthday celebrations onboard begin, with the Cook. Image: Bill Ellemor. 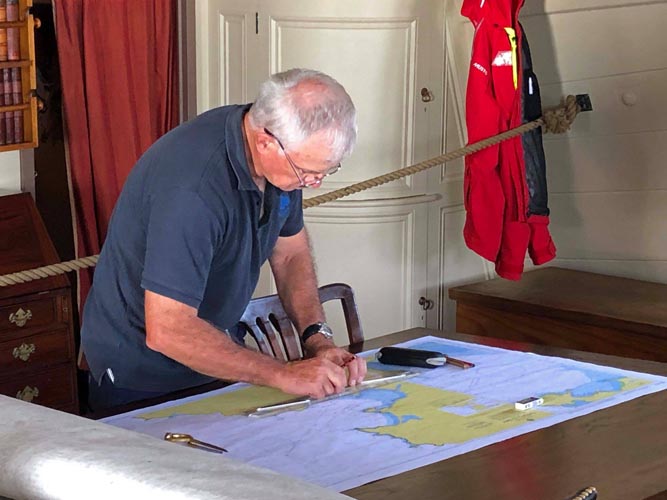 In the morning Soren Larsen, also en route to Hobart, was seen anchored nearby having reached Eden during the early hours.

Endeavour weighed anchor in Eden, intending to empty the greywater tank at sea, and then move to a new anchorage to shelter from an impending southerly change. The greywater dump took longer than expected, so the wind changed while we were still at sea but luckily, we anchored on the other side of the bay by dinner time.

The capstan was deployed twice, in much more clement weather, today. This gave the excited crew a chance to learn more about its deployment and use.

The crew removed the hatch cover and two fenders usually lashed either side of the gentlemen’s mess skylight hatch. The capstan bars were then fitted turning the whole into a sizeable machine capable of heavy hauling. The crew then  turned the hub around where a line is fed. Meanwhile, other crew members controlled the tail of the line

I now deeply appreciate the effort required for sailing in the eighteenth century — before the rise of engines and electric motors. I can see the sailors of yesteryear working the capstan as part of the effort required to haul Endeavour off the reef, then having to haul it back into deep water, after it had been beached and repaired. 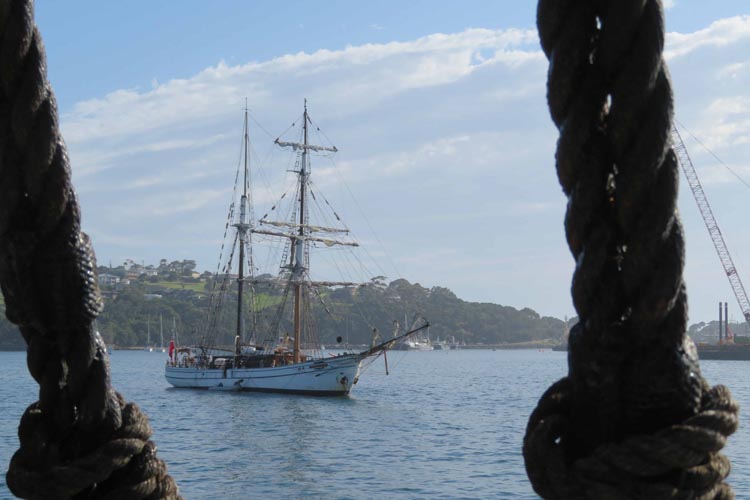 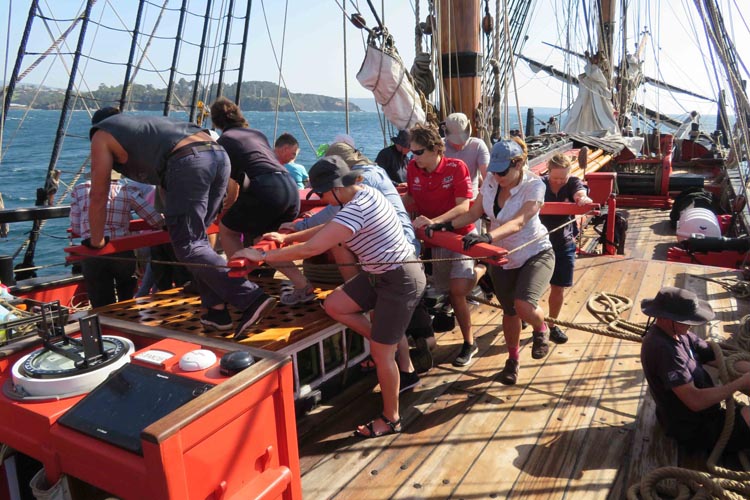 All hands to the capstan. Image: Bill Ellemor. 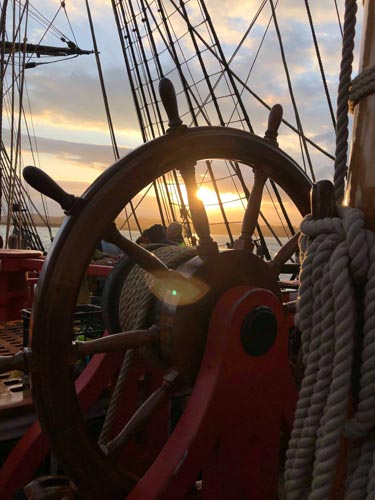 Want to sail on HMB Endeavour? Find out more.

The replica of Captain Cook's tall ship HMB Endeavour is managed by the Australian National Maritime Museum. Endeavour regularly sails in Australian waters and we keep a ship's blog to give you an insight into life on board.

View all posts by Endeavour Crew→
Posted in: Vessels
↑