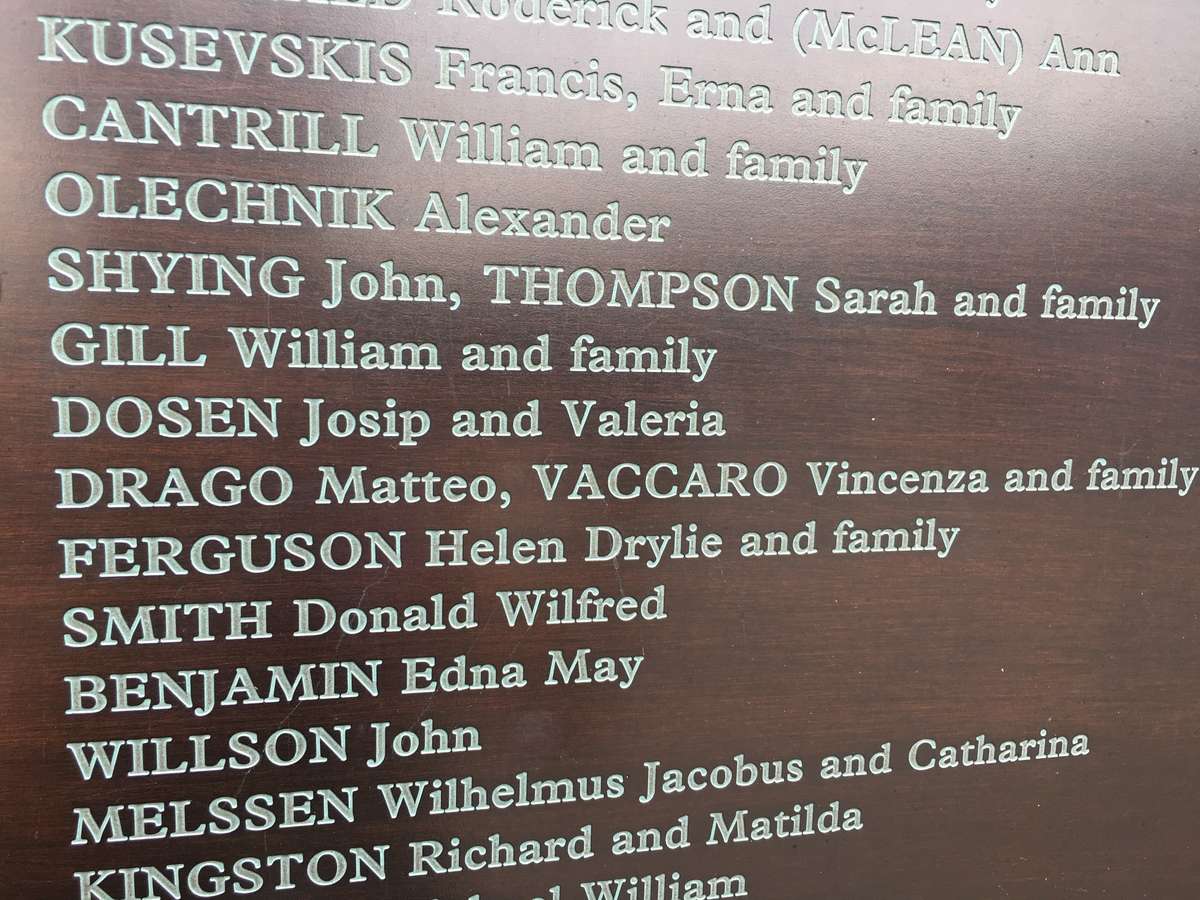 Lunar New Year has just passed, and the so-called world’s largest annual human migration, as hundreds of millions of people (particularly China’s urban-based migrant workers) headed home to spend the holiday with their families. It’s also a special milestone in Australia’s immigration history as it is 201 years since one of the first documented Chinese-born free settlers arrived in New South Wales.

Mak Sai Ying (later anglicised to John Pong Shying) arrived in Sydney on 27 February 1818, just 30 years after the First Fleet and several decades before the 1850s gold rushes, which would bring thousands of Chinese fortune seekers to Australia. John Shying has the distinction of being the first Chinese landowner and publican in Sydney, and also the grandfather of the first Chinese-Australian serviceman.

Settling in Sydney: marriage and a publican

Shying was born about 1796 in Canton (now Guangzhou), in southern China’s Guangdong province. He arrived in Sydney with the English settler John Blaxland on the Laurel, an Indian-built vessel that sailed between Calcutta, Canton and Sydney. Shying worked with Blaxland as a carpenter for three years and lived on his family’s Newington estate on the banks of the Parramatta River. He also worked for the pastoralist Elizabeth Macarthur (who with her husband John Macarthur pioneered the wool industry in Australia) at Elizabeth Farm in Rosehill. 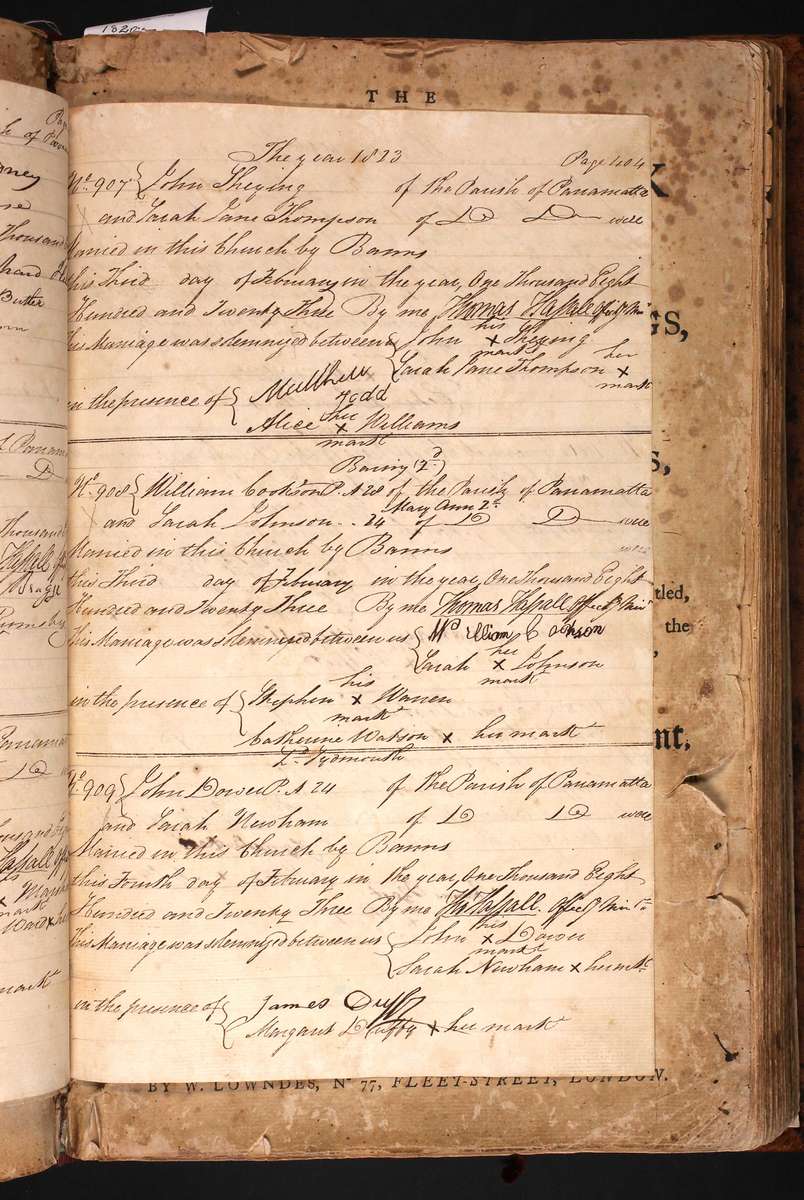 On 3 February 1823, John Shying married Englishwoman Sarah Jane Thompson (1802–1836), a free settler who arrived in the colony in 1820 on the Morley. The couple wed at St John’s Anglican Church in Parramatta and settled in the area, where Shying ran a shop until he was granted a publican’s licence in 1830. Licence number 58 notes he was authorised ‘to retail wines and malt and spirituous liquors’ at the Golden Lion on Church Street. 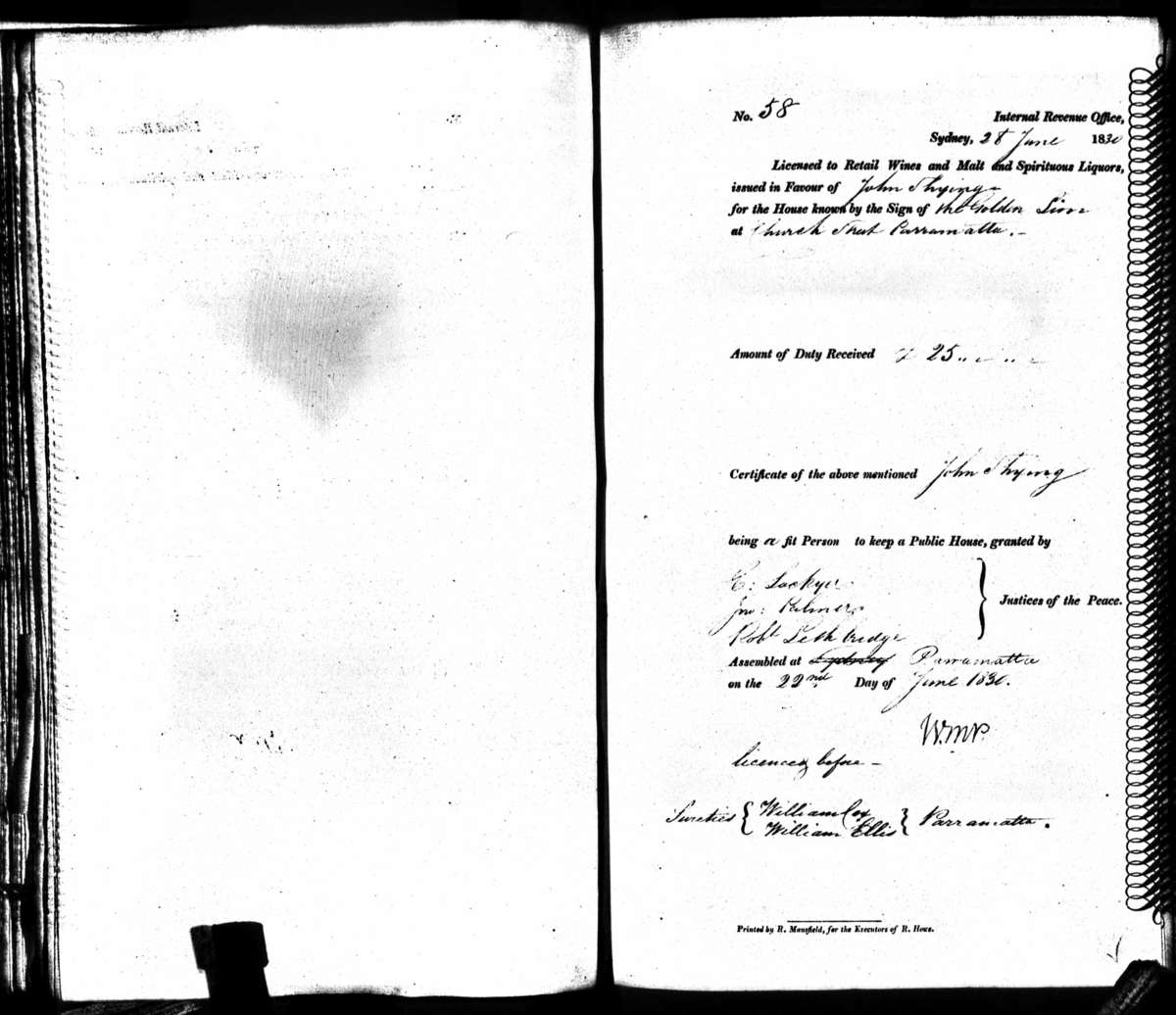 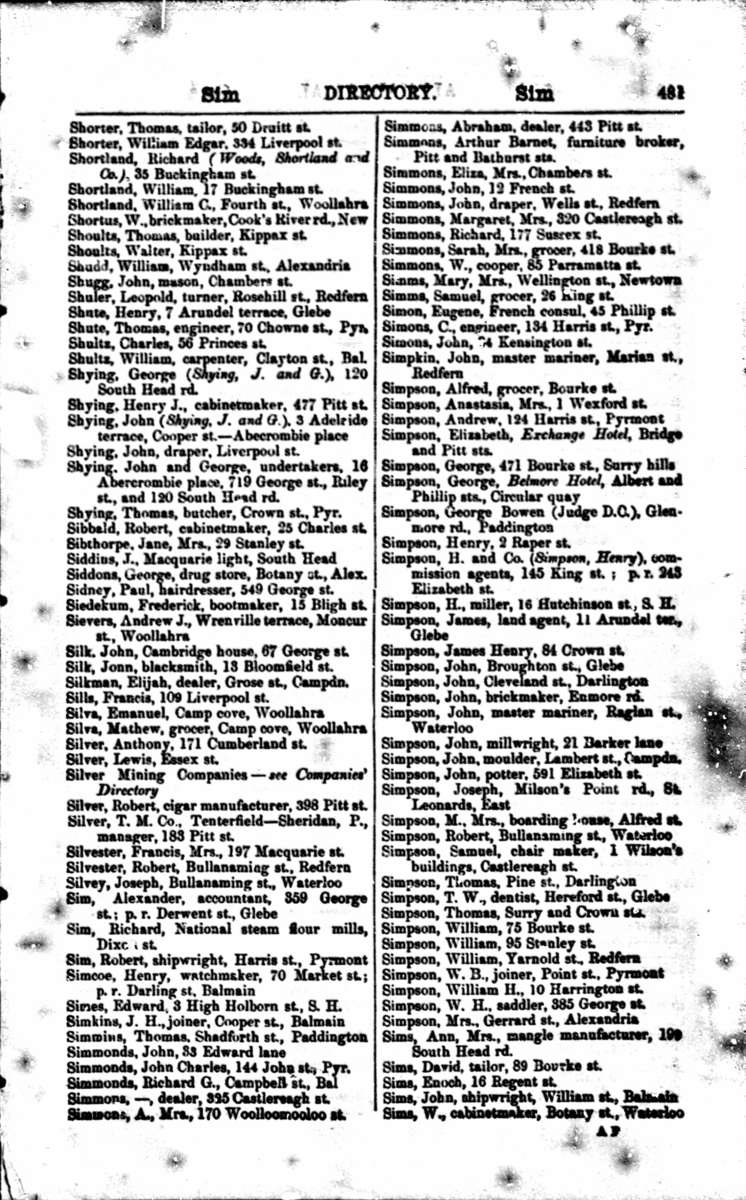 John James’ son, Sergeant John Joseph Shying (1844–1900), a draper, became the first Chinese-Australian serviceman when he served with the New South Wales Contingent of the Colonial Military Forces in the Anglo–Sudan War in 1885. 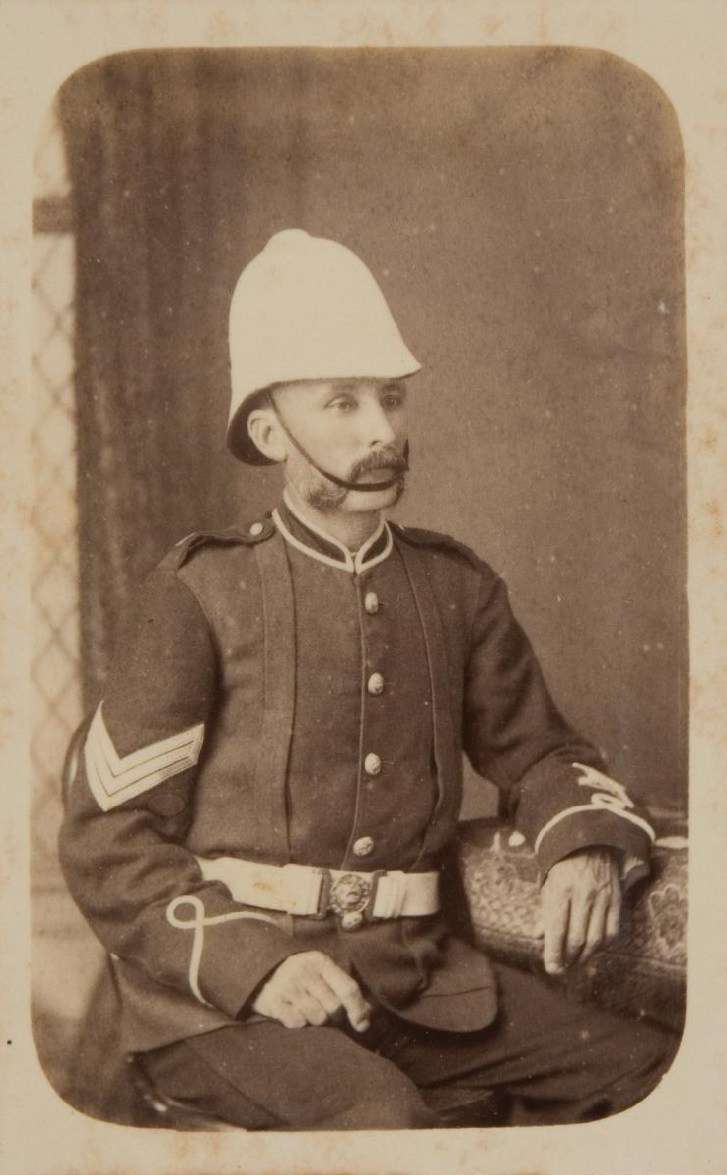 After the birth of his fourth son, John Shying went back to China from 1831 to 1836 for business and family reasons. He returned to Sydney after the death of his wife Sarah in 1836. Records from this period reveal he became the publican at the Lamb Inn on Pennant Street, Parramatta, in 1837, and later married a widowed Irishwoman, Bridget Gillorley (1813–1845), on 10 October 1842. 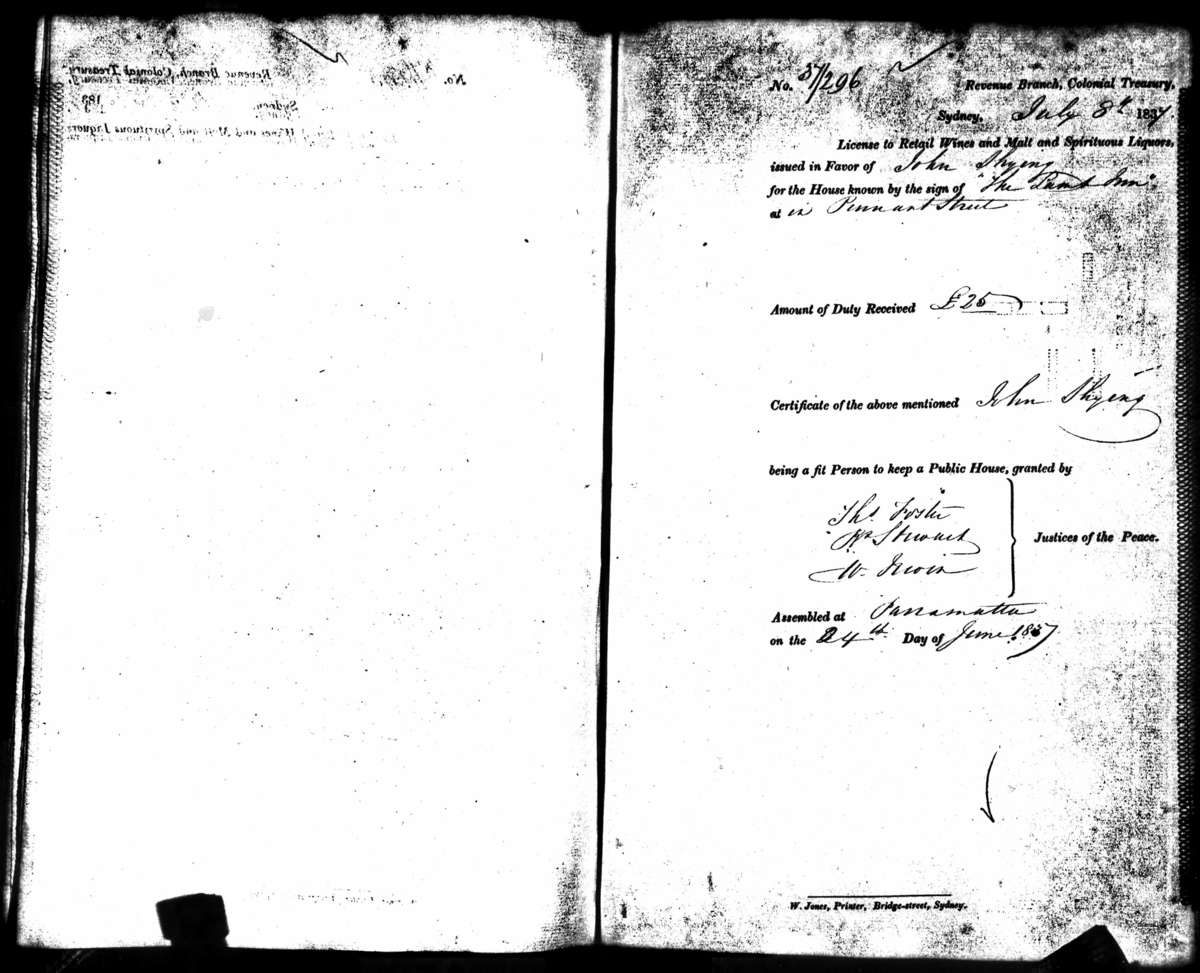 In 1844 a number of newspaper advertisements refer to Shying as the proprietor of the Peacock Inn at Parramatta, which was to be sold at auction on 13 March 1844. The Inn was described as having ‘an excellent China-fashioned verandah running the whole frontage, and contains a bar, tap-room, three sitting and three bed rooms, large yard, stables, coach-house, a never-failing well of good water, and cellars’. The property was situated in ‘the best thoroughfare in the town, and is proverbial as being a LUCKY HOUSE’ (The Sydney Morning Herald, 24 February 1844, p 3). 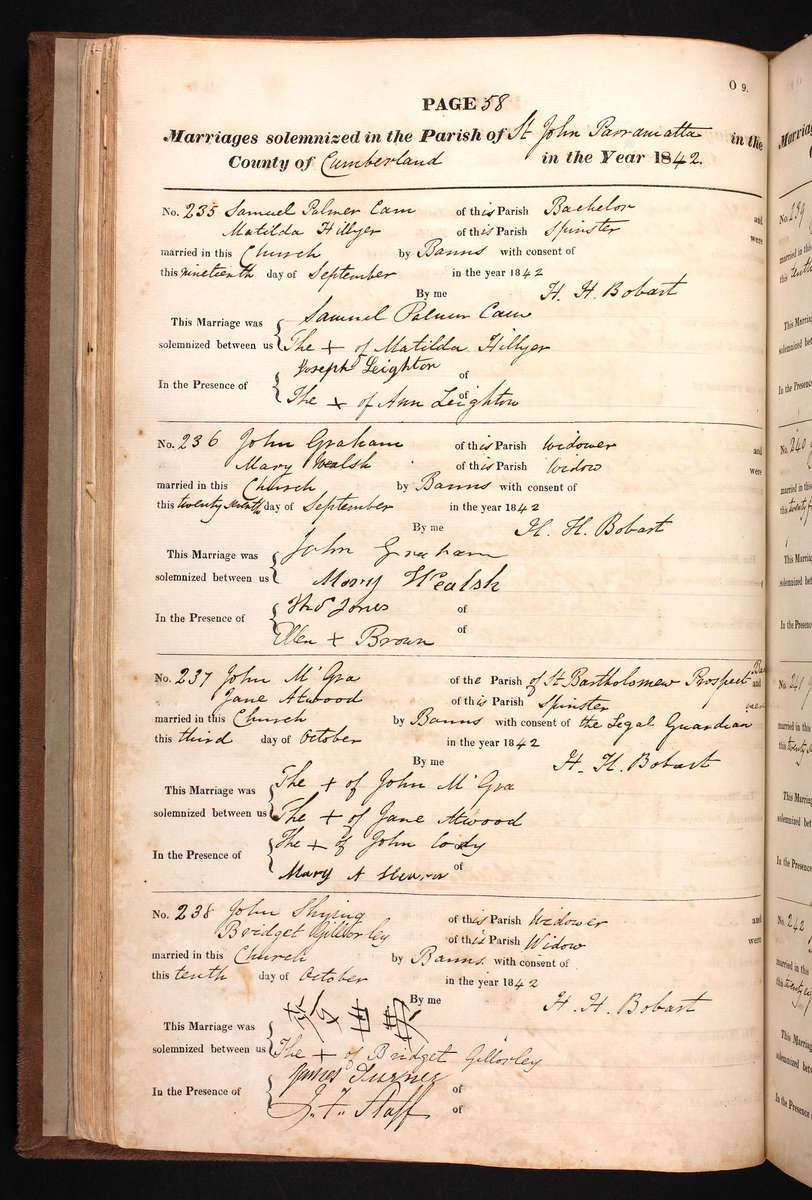 After this period John Shying disappears from the public records. It is possible that he returned to China after the death of his second wife Bridget, or if he remained in New South Wales, his death may have been recorded under a different name.

Today Shying’s descendants still live in Sydney and their family history research papers are held at the State Library of New South Wales. John Shying’s name, along with that of his first wife Sarah Thompson, was registered on the museum’s Welcome Wall by his great-great-granddaughter to honour a pioneering Chinese settler. Two centuries after Shying’s arrival, more than five percent of Australia’s population (some 1.2 million people) identify as having Chinese ancestry.