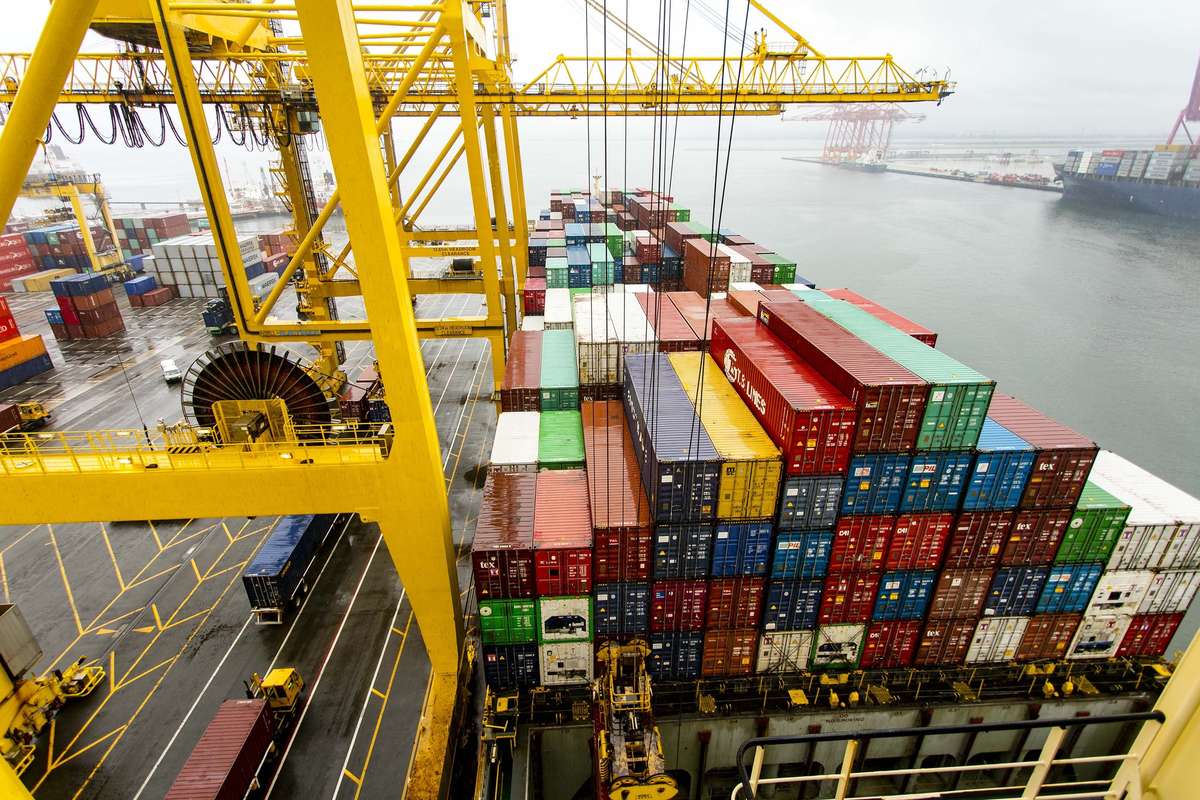 One of 999 boxes being unloaded from the Yang Ming Singapore. Image: Andrew Frolows/ANMM.

In today’s global world you may have drunk coffee from Brazil or a smoothie containing frozen fruit from China. You could be wearing clothes made in India, watching a TV made in Japan while sitting on a sofa containing wood from Argentina on a laminate floor manufactured in Sweden. All of this has been made possible by a rectangular steel box – the humble shipping container.

It’s a wet and windy morning as the Yang Ming Singapore arrives in Sydney, ready to discharge and load almost 2,000 of the 2.3 million containers that will pass through Port Botany Container Terminal this year. Curator and project manager Dr Mary-Elizabeth Andrews takes a look on board. 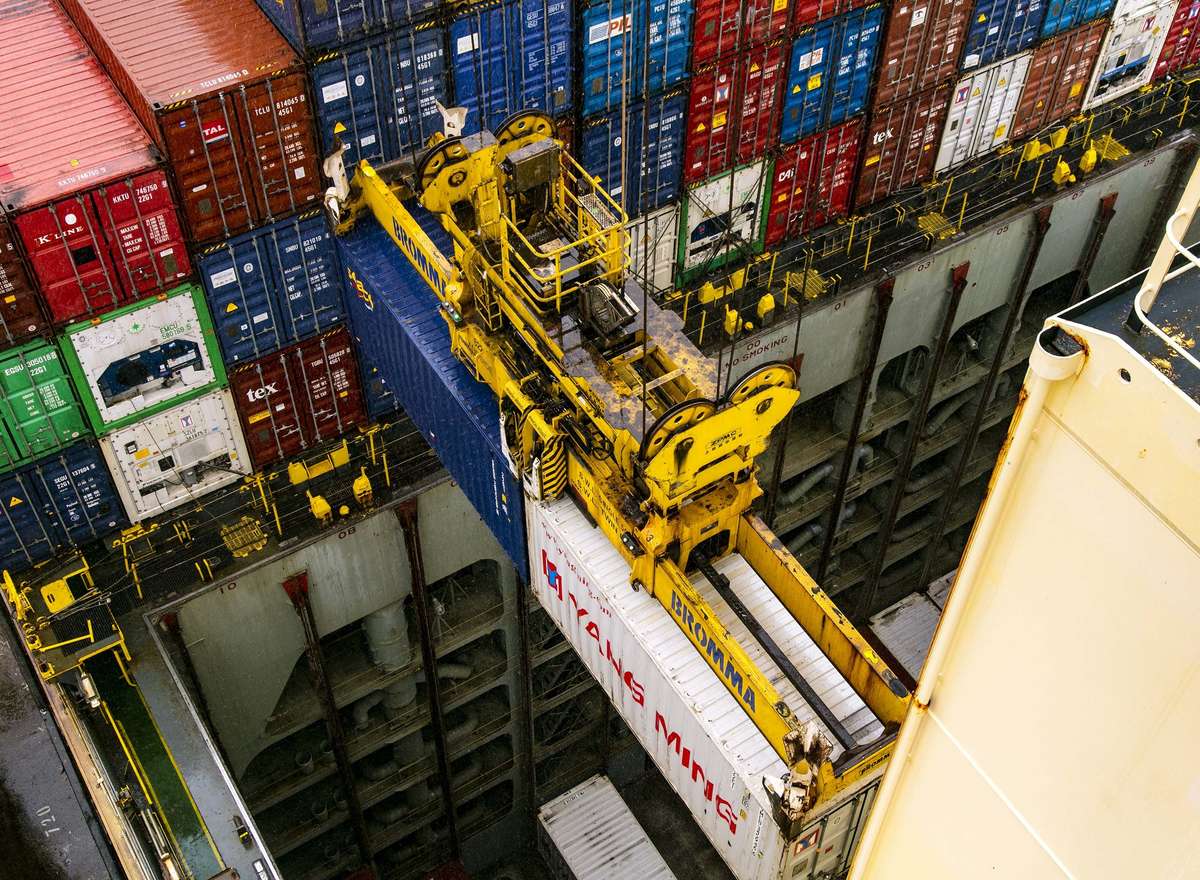 Today 999 boxes are discharged and 932 loaded on a single container ship at Port Botany. The contents of these metal boxes represent millions of dollars worth of trade for Australia. Image: Andrew Frolows/ANMM.

It is 11am at Port Botany and it’s been raining on and off all day, but now the heavens really open. Museum photographer Andrew Frolows and I have an appointment with the Yang Ming Singapore, one of five container ships in port today. The YM Singapore arrived outside the Kurnell headland fairly close to schedule at 2.18 am. Within two hours it had been piloted through Botany Bay and docked at one of three berths along the 937-metre wharf operated by DP World, which, along with Patrick and Hutchison, occupies about 146 hectares of container terminal space at Port Botany. 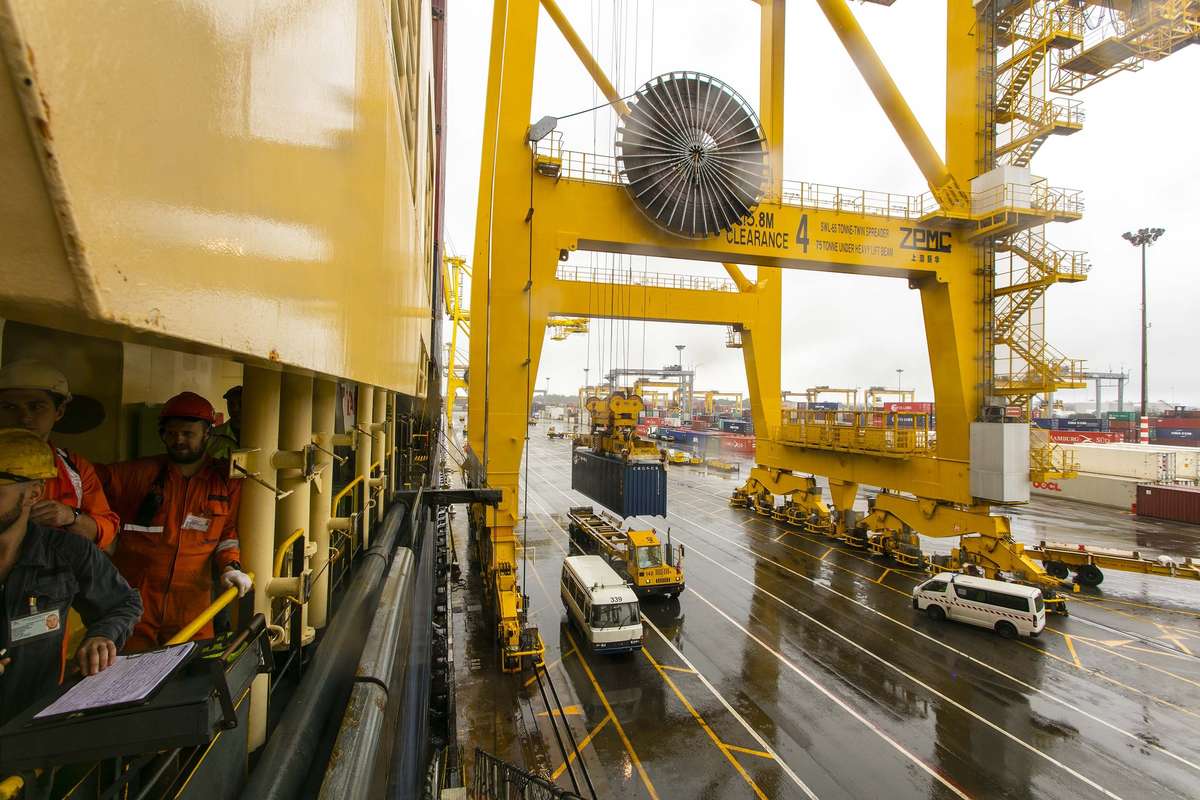 Unlike the adjacent airport (Sydney’s Kingsford Smith), Port Botany never sleeps. Nor does it slow down for bad weather. Waiting for security clearance on the perimeter of the DP World facility with nothing but a converted shipping container for shelter, we’re painfully aware of this fact. By the time we reach the ship – in a mini-bus so we’re not inadvertently crushed by the ever-moving rubber-tyred gantries, heavy-duty container forklift trucks, internal transfer vehicles or the never-ending procession of trucks – work is well underway. The cranes are carrying out their hypnotic exchange of boxes overhead.

Unlike the adjacent airport, Port Botany never sleeps. Nor does it slow down for bad weather.

DP World’s Botany terminal has seven million-dollar-plus ZPMC quayside gantry cranes, also known as ‘gooseneck’ cranes for their ability to lift a feeder arm clear of berthing vessels and drop it down again to span the width of the ship – in the case of YM Singapore, that’s 32 metres. The cranes are distinctively yellow against the grey sky and can simultaneously load and unload containers weighing up to 90 tonnes each.

Operators stationed in glass-bottomed cabins suspended about 30 metres overhead traverse the entire span, moving backwards and forwards to lower and lift the special container spreaders that lock into the boxes’ corner castings using a twist-lock and release mechanism. The high-tech computerised operation facilitates an average lift rate of about 40 containers per hour, the equivalent of which would have taken several days to load using traditional techniques before the advent of the container.

It’s still raining as we board the ship. We were issued security passes before making our way to the Ship’s Control Office to meet the Russian-born Captain, Mikhail, and Ukrainian Chief Officer, Sergii. The captain is completing a Port State Control inspection with a representative from AMSA, the Australian Maritime Safety Authority, which conducts comprehensive checks on some 3,500 international vessels each year to ensure that environmental and safety standards are maintained.

This goes for the safety of the ship and its cargo as well as crew’s well-being and is guided by International Convention requirements and the resolutions of the International Maritime Organisation and International Labour Organisation. Given the sometimes murky lines of responsibility for ships that may be owned in one state, registered in another, chartered by a separate party altogether and crewed via an international crewing agency, these inspections are an important means of protecting the marine environment and lives at sea. 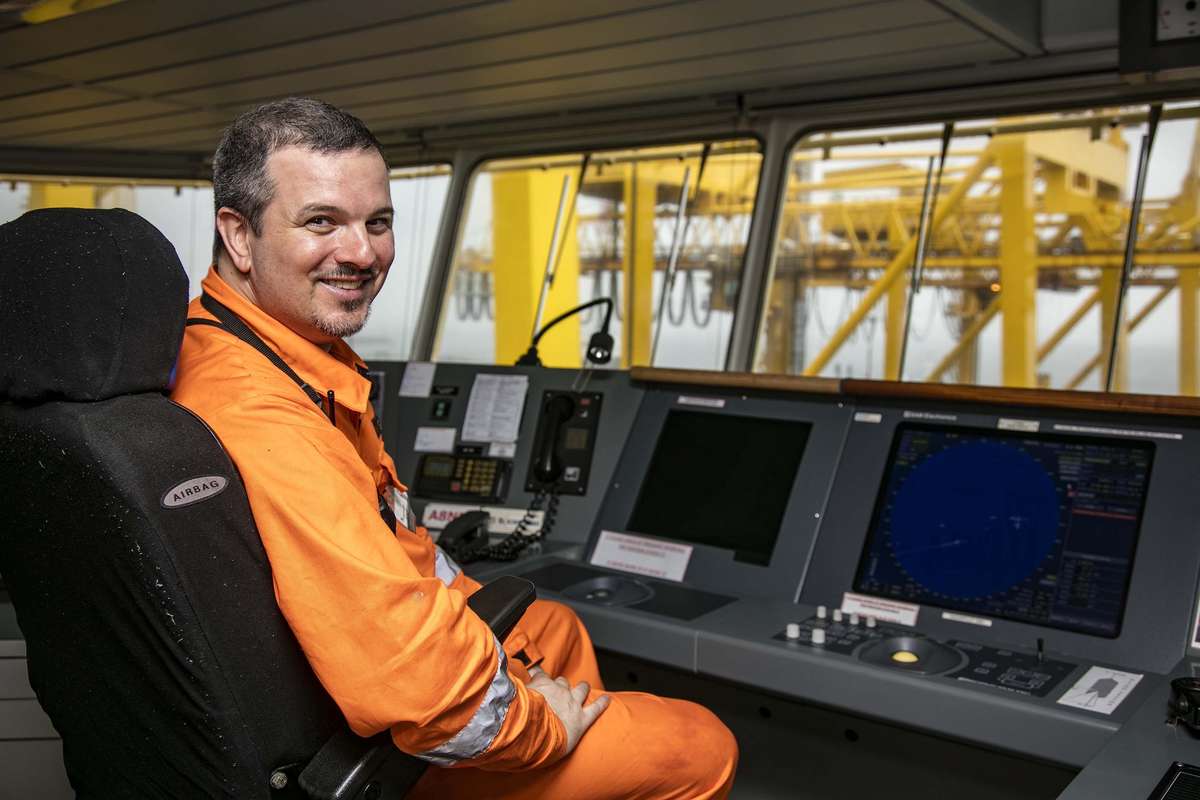 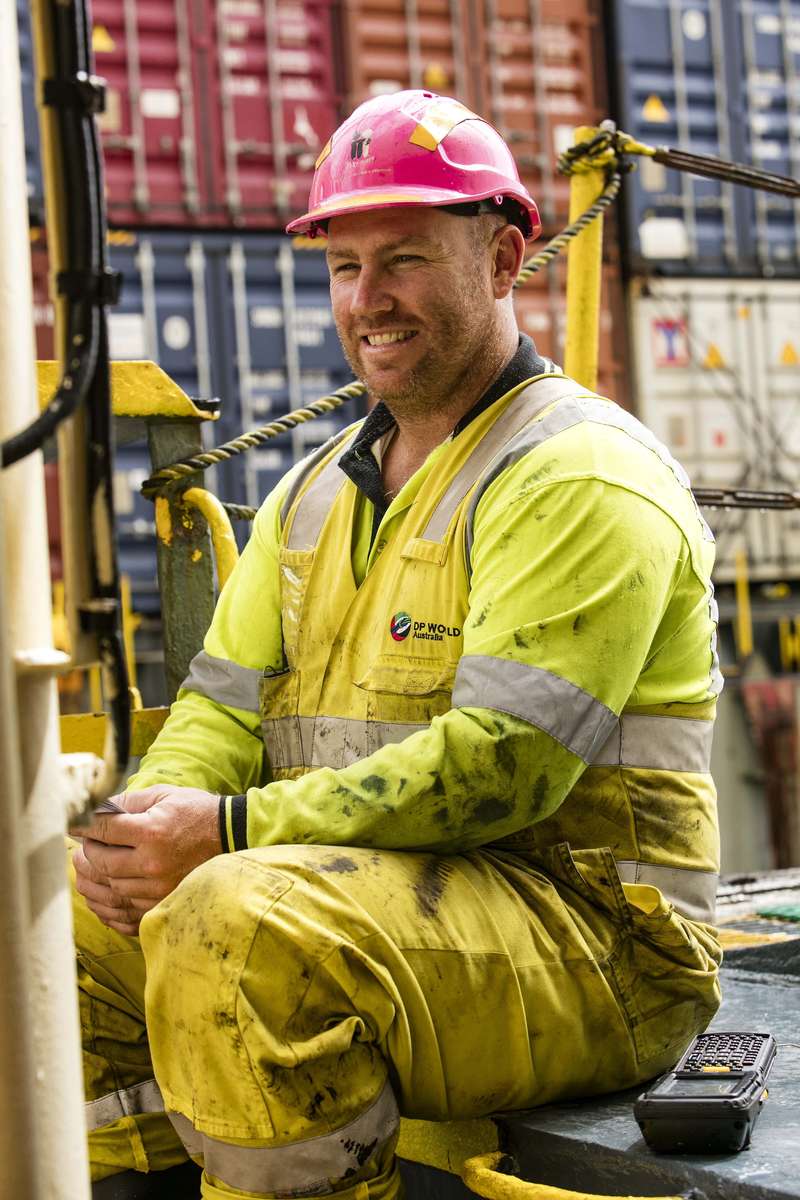 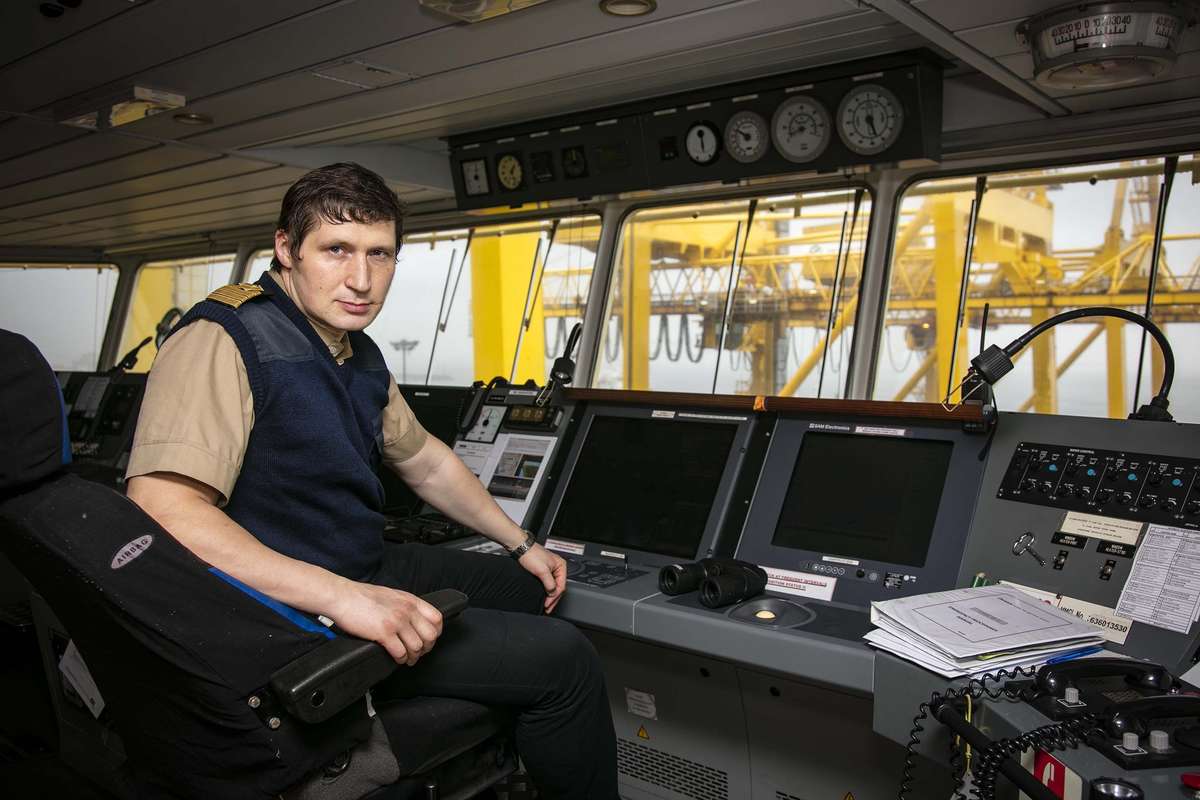 In the case of the Yang Ming Singapore, a Greek-owned, Taiwanese-operated vessel flying the Liberian flag, half of the 22 officers and ratings on board are Russian and the rest are Ukrainian. Just to confuse matters, the vessel was originally commissioned by a German shipping company and kitted out to their specifications, so the crew tell me it’s a German ship (hence the excellent leisure facilities, including a ping-pong room, swimming pool and sauna).

While seafaring has always been international by definition, the countries of origin for employment and ship ownership today are increasingly separate, and whatever political tensions may exist between nation-states, the 1.5 million seafarers across the globe must work together. YM Singapore’s crew may typify this point, but it’s not wholly representative of global statistics.

According to the latest report of the United Nations Conference on Trade and Development (UNCTAD), the largest suppliers of seafarers are China, Indonesia and the Philippines, followed by the Russian Federation, India and Ukraine.1 UNCTAD also points out the implications for home economies. Given the relative population sizes, seafaring is a significantly more important source of income for the Philippines than any of the other major suppliers.2 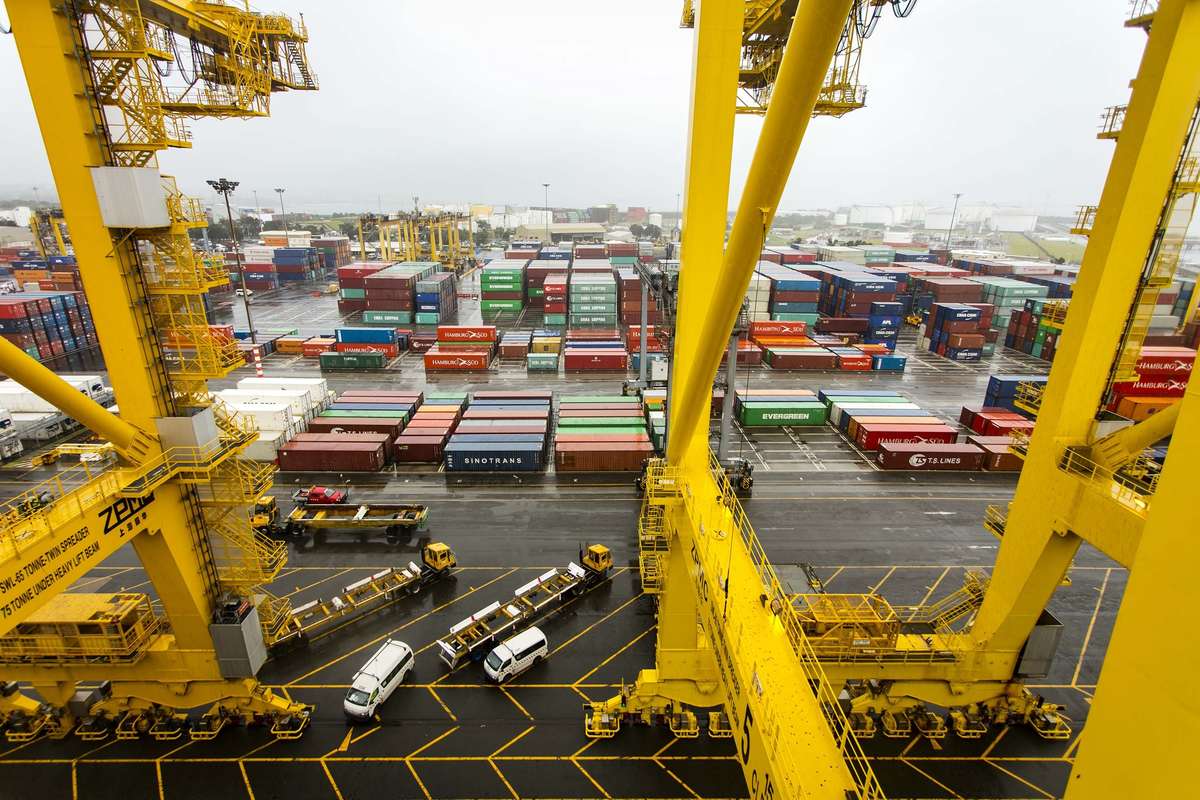 The containers waiting on the terminal, amid the gantries. The scale of the container terminal is awe-inspiring. Image: Andrew Frolows/ANMM.

42 days for a round trip

Sergii offers to show us around. He explains that he’s been on board this time for just over two weeks. Officers usually spend four to five months at sea, so he has a long haul ahead of him. For ratings, it can be up to seven months before they see home. I ask Sergii if he’ll have a chance to disembark, to see anything of Sydney while he’s here, but as the chief officer, he has too many responsibilities during the ship’s brief stay.

YM Singapore is operating on the CAT service: China – Australia – Taiwan. It departed Ningbo, a major port and industrial centre in China’s Zhejiang province, 19 days ago and stopped at Shanghai, then Shekou, which lies across the Shenzhen Bay from Hong Kong, and Kaohsiung, on Taiwan’s south-west coast, before making a 12-day trek to Sydney. Tomorrow it departs for Melbourne, Brisbane and Kaohsiung again before starting all over.

The whole CAT run takes 42 days and is a significant service for Australia’s containerised trade. China ranks first among Australia’s two-way trade partners; that is, it’s our largest export destination and our largest import source.3 Taiwan ranks ninth and 15th respectively, placing it 13th in terms of two-way trade.4 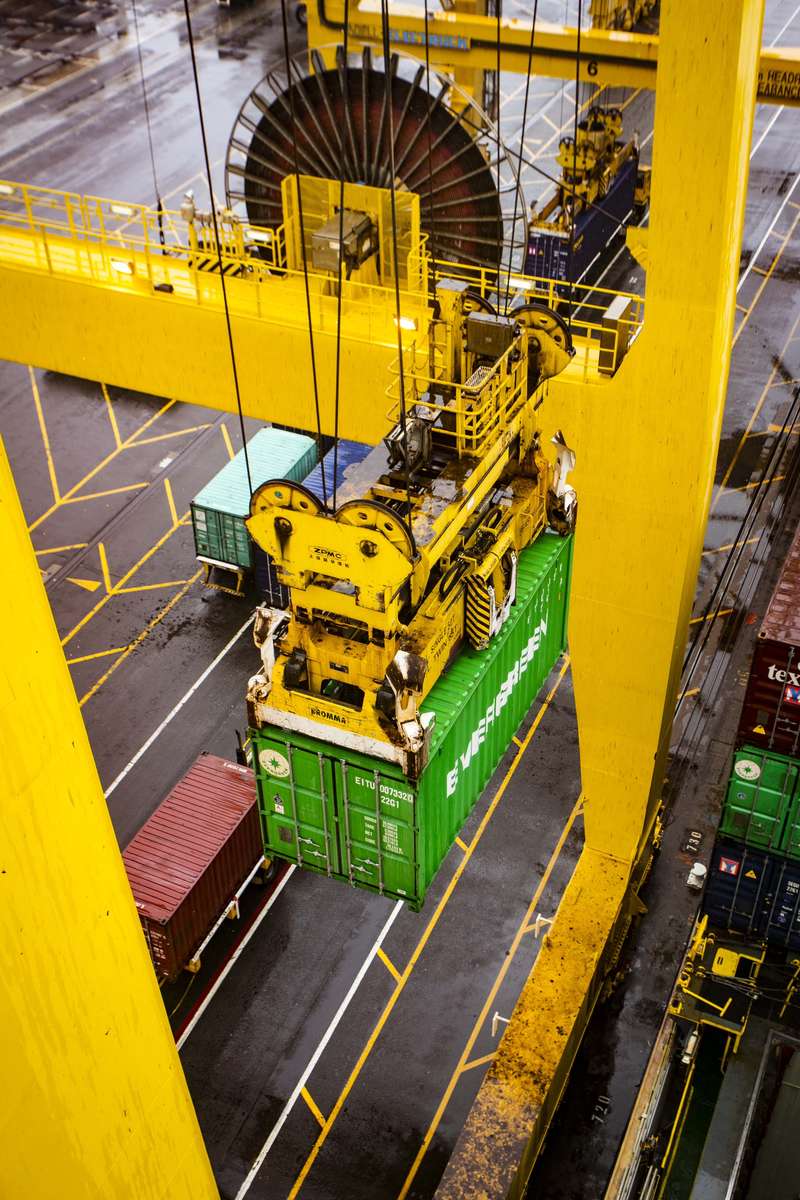 It takes the gantry crane less than a minute to unload a container. Image: Andrew Frolows/ANMM.

There are around 3,500 containers on board today, just over 80 percent capacity for this 2004-built 4,300 TEU (Twenty-foot Equivalent Unit) capacity vessel. Jason McGregor, Marketing and Trade Manager for NSW Ports, has joined us on board and tells me this is a fairly typical utilisation pattern for this time of year. Container ships are generally full around Christmas and Chinese New Year, when they can command freight rates of $1,000 per container. These rates fluctuate according to demand and can drop as low as $600.

Because of the vital importance of seaborne trade to national and global economies, port activity is perhaps the best barometer of the health of an economy. A port worker once told me that the effects of the former Australian Labor government’s multi-billion-dollar stimulus package during the Global Financial Crisis could be measured within days on the docks as shipping trade picked up again. 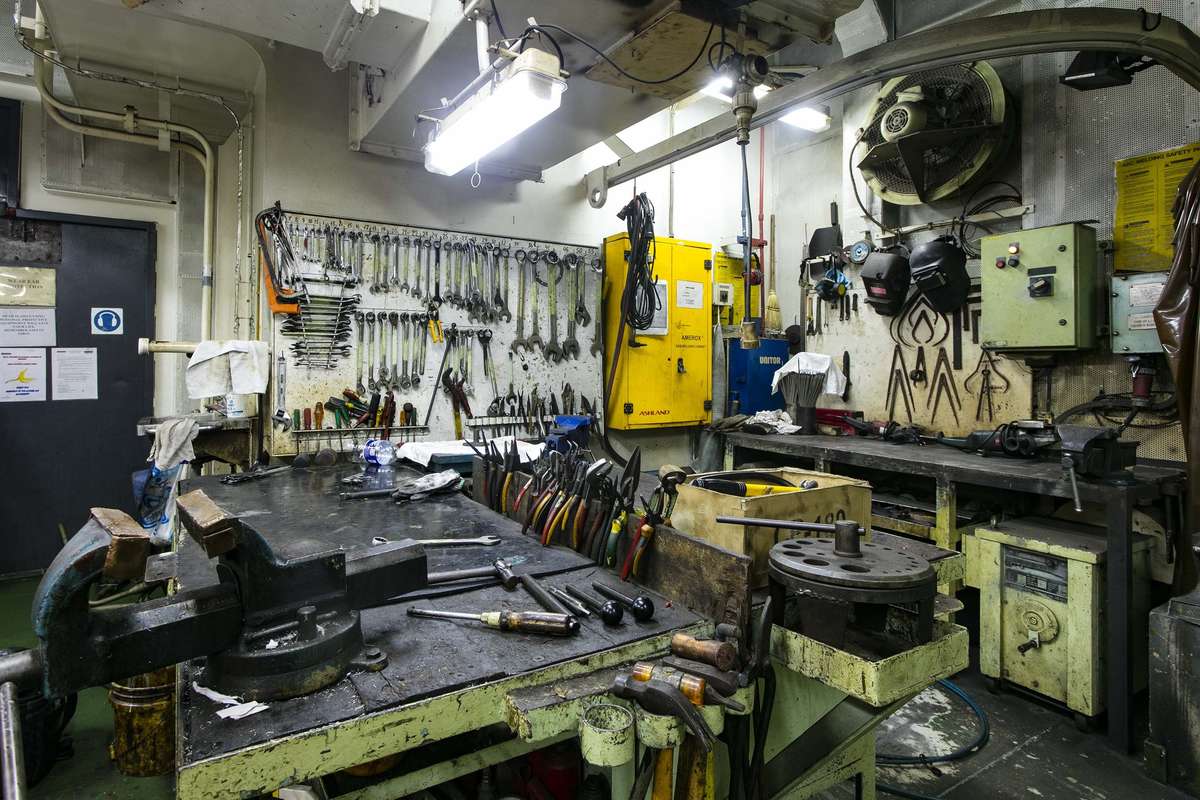 Each shipping run takes 42 days, during which the ship’s crew need to make any and all required repairs to the engines from this small workshop. Image: Andrew Frolows/ANMM.

Life on board a containership

We head down to the engine room first. At 4,300 TEU and 53,611 DWT (deadweight tonnage), this is a Panamax container ship5 and about average for the Australian trade. I’ve seen images of the massive twin-propeller engines that run the 18,000 TEU Triple-E ships which ply the ocean on the Europe–Asia service, but YM Singapore’s Hyundai B&W Type MC-C diesel engine is, nonetheless, impressive.

The noise, even when idling, brings that home even more. Engineers are overhauling a cylinder and Sergii takes us through to see their workshop, where they can fabricate what they need to make repairs at sea, often hundreds of kilometres from the nearest parts supplier.

We visit the bridge next, where the captain joins us. Despite the foul weather, we head straight out to the wings, where we get a prime view of the constant whirring and clanging of cables and cranes. One crane is directly in front of us, so that the little glass cabin moves backwards and forwards above and I can see the driver’s feet.

Standing out on the YM Singapore’s wings, off the navigation deck. Image: Kate Pentecost/ANMM.

I’m fascinated by the process and watch one box after another be located, picked up, carried through the air, lowered, gently placed on a waiting vehicle and driven away. The whole process takes less than two minutes and another transit vehicle drives straight up behind to receive the next box. The movement is relentless.

Back inside, I ask how many boxes are being exchanged today and Sergii replies straight away with the precise figures: 999 boxes are being discharged and 932 loaded. What’s in the boxes is much more difficult to answer. In terms of the top commodities arriving from East Asia, it’s likely there’s a good deal of furniture, bedding and mattresses, lamps and light fittings, toys and sporting goods, as well as electrical items, textiles, chemicals, pharmaceuticals, foodstuffs, beverages, machinery and parts.

The navigation deck and bridge, a complex array of equipment and the impressive view from the windows. Image: Kate Pentecost/ANMM.

We take a quick look at the equipment on the bridge, a complex array of navigational equipment and monitoring devices. The captain shows me how he can check that each part of the ship is watertight with the flick of a switch, an important feature in a storm. With the rain persisting, we’re not going to make it to the main deck to walk the perimeter of the ship and see the stacked containers up close, but Sergii asks if we’d like to visit the galley before we go.

The galley where the crew share meals and embrace the camaraderie of the ship. Image: Kate Pentecost/ANMM.

There’s a small eating area, which is homelier than I’d expected, and in the galley Chief Cook Vladislav is getting ready to prepare the evening meal, chicken and rice. He’s more than happy to pose for the camera and we get the sense that we’ve found the life of the ship. Sergii says the food is pretty good, too. 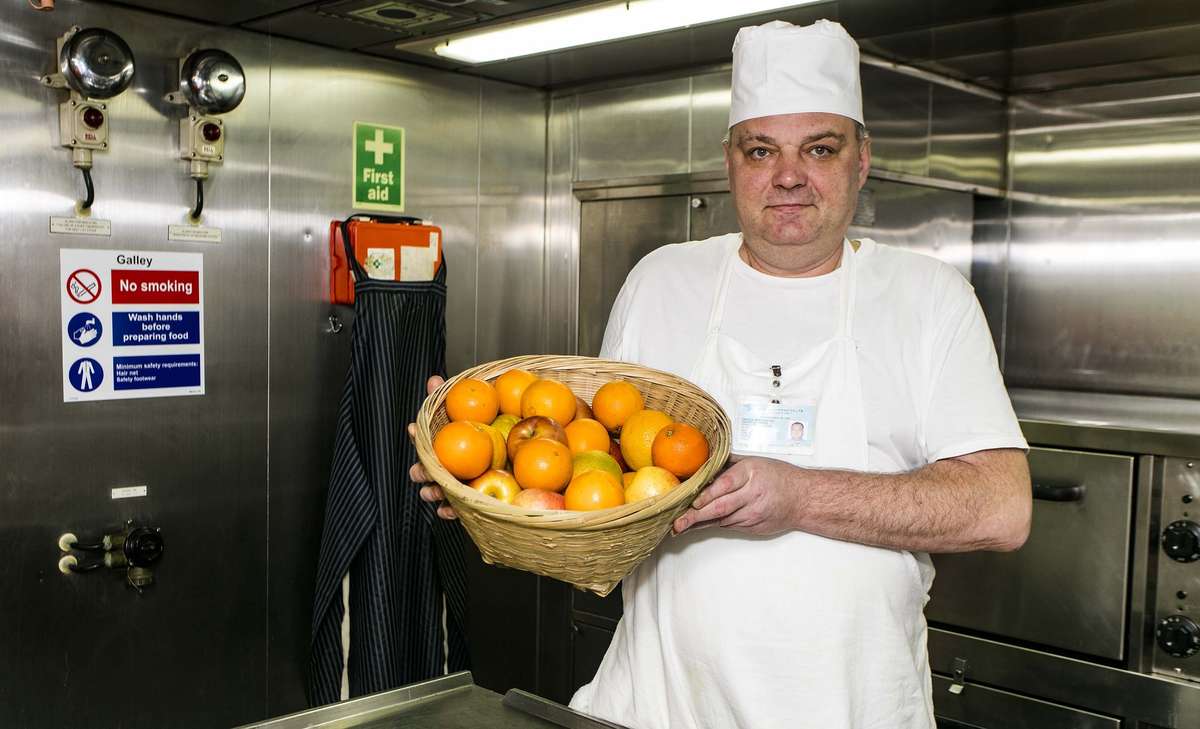 As we leave the ship the sun suddenly appears from nowhere, illuminating the glistening coloured boxes that spread out on the terminal before us. By the time we return to the museum, it’s clear and warm. I package up some complimentary museum passes for Captain Mikhail and Sergii. A former navy sailor, Sergii is particularly keen to see HMAS Onslow and HMAS Vampire and he assures me that he’ll find time to visit next time he’s in port.

5. ‘Panamax’ refers to the largest container ships able to pass through the Panama Canal prior to the expansion project concluded in 2016.

Dr Mary-Elizabeth Andrews is a curator at the Australian National Maritime Museum.

View all posts by Mary-Liz Andrews→
Posted in: Exhibitions , Arts and Culture
↑