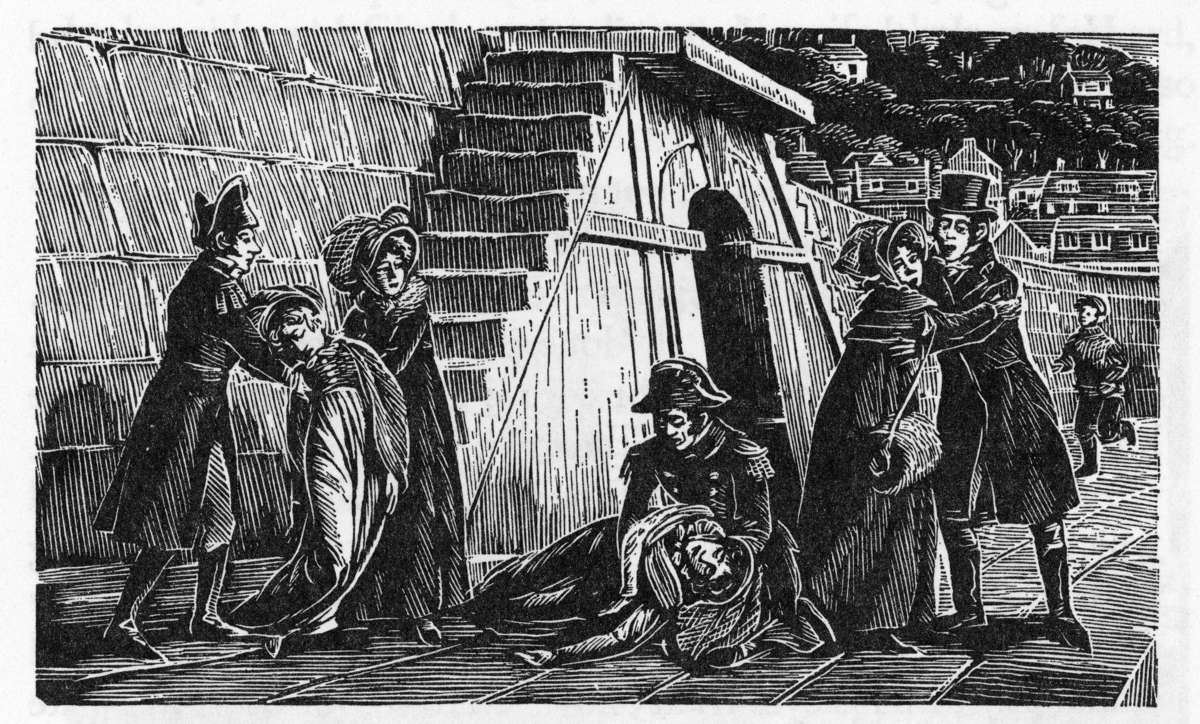 Woodcut by Joan Hassall illustrating a pivotal scene from the novel, an accident in Lyme Regis. Anne Elliot is third from left and Captain Wentworth kneeling at centre. From the 1975 Folio Society edition of Persuasion, reproduced with permission.

If, like me, you’ve been meaning to reread Jane Austen, among other classics you first read long ago, then this year is the time to do it — the 200th anniversary of her death in July 1817. And if, like me, you weren’t sure which one to begin with, let me guide you as a reader of Persuasion, with its splendid central characters drawn from the Royal Navy at the end of the Napoleonic Wars. It’s not just chick-lit for the literati. You can read it, if you like, as an adjunct or appendix to the well-thumbed maritime classics of C S Forrester and Patrick O’Brian, most likely sitting on your bookshelves already.

Published posthumously in 1818, Persuasion was written in 1815–16 and is set about a year earlier, when its heroine Anne Elliot is 27 and unmarried. It’s the end of Britain’s wars against the French (1803–14), which have made it the world’s greatest naval power. The Royal Navy has grown massively, dominating its adversaries, keeping them blockaded into ports and preventing Napoleon from invading. Its greatest set-piece sea battle and victory, Trafalgar, is nearly a decade in the past, but news of actions has been continuous, in part because of the Royal Navy’s policy of prize money. This was a scaled share of the value of a captured enemy ship, and a ‘head money’ bounty for each captured sailor, which encouraged everyone on a British naval ship to aggressively pursue an enemy vessel, disable it with cannon fire, board it for bloody hand-to-hand combat and sail the prize home. The captain’s share was a quarter, but just a few hours’ battle could win a year’s salary for an ordinary seaman.

Okay, there’s scarcely a word in Persuasion about the heroic naval battles and captured prizes that made a wealthy man of Captain Frederick Wentworth, the love of Anne Elliot’s life, or that increased the wealth and social status of the couple’s friends and allies, the admirable Admiral and Mrs Croft. For Austen and her readers they’re assumed knowledge, in an England basking in victory and awash with the magnificent exploits of the Royal Navy. But in any case, you’ve read enough tales of Horatio Hornblower and Jack Aubrey – and probably of Admiral Lord Thomas Cochrane, whose incredible real-life adventures inspired much of the fiction – to know what sort of extremely hazardous things Jane Austen’s characters have recently been up to.

Instead, being Jane Austen, her novel is about the upper-middle-class and titled society that these naval characters must navigate when they step ashore victorious and wealthy, with all that society’s etiquette, conventions, hierarchies, rivalries, conceits and snobberies. And being Jane Austen she trains her incredibly fine-tuned social, psychological and moral antennae upon this society with humor, irony and humanity, while dissecting her characters’ loves and longings, virtues and flaws, vanities, delusions and manners. Or she lets her characters reveal themselves in their long, long dialogues, for which she lends them the use of her own perfect, polished, syntactically flawless and prolifically punctuated prose! 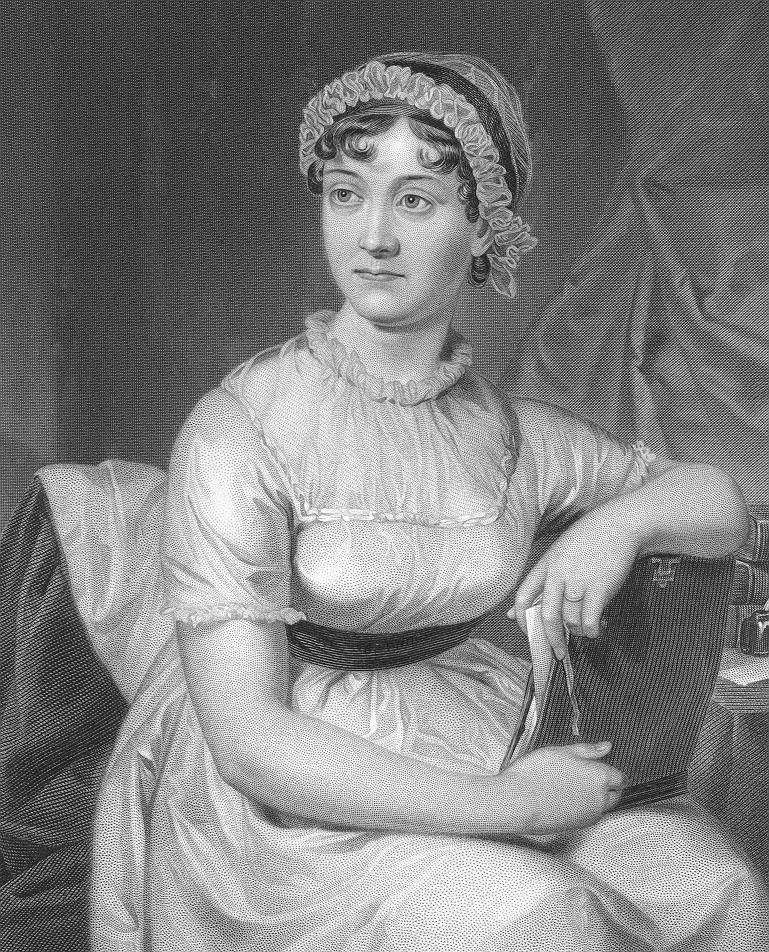 It’s that Austen world where almost nobody actually has a job, except for an occasional curate or glimpses of the lawyers and agents who manage the fortunes that support the central characters’ leisured lives. It’s an endless round of dinner parties and balls and visits to affluent Somerset country houses or apartments in Bath, ordered by strict protocols. It’s clear that Austen’s sympathies are often strongly with the naval characters who have been doing real work beyond the horizons of this rarified milieu, and who often bring decisiveness, practicality and solid human values forged in their unseen world of action and hardship. Jane Austen writes her naval characters with authenticity and experience, having two brothers, Francis and Charles, who had successful careers in the Royal Navy. 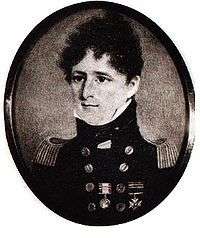 Two of Jane Austen’s brothers, Francis and Charles, both had successful careers in the Royal Navy, rising to the rank of admiral. Francis portrait from Wikicommons. 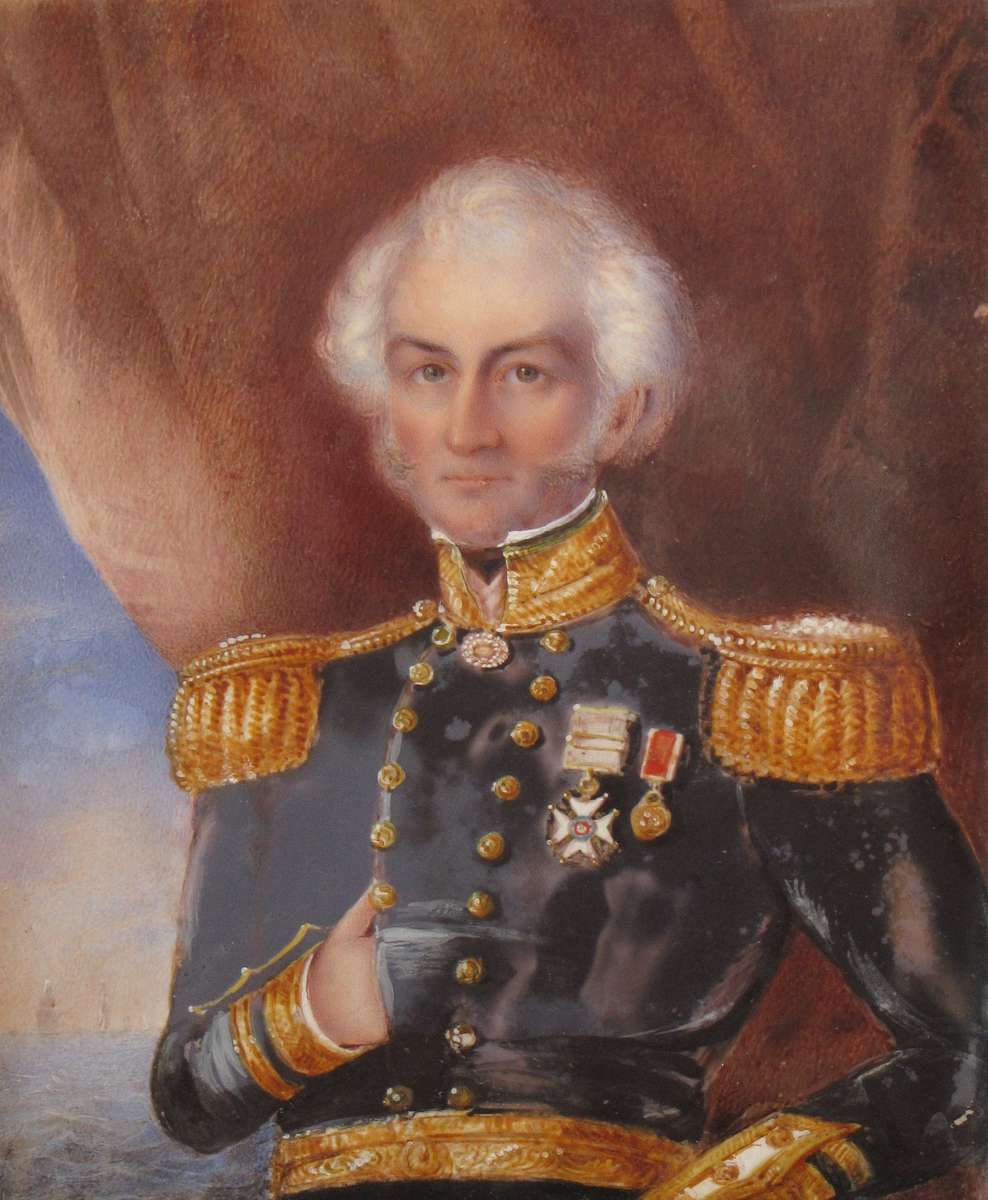 Two of Jane Austen’s brothers, Francis and Charles, both had successful careers in the Royal Navy, rising to the rank of admiral. The portrait of Charles Austen was painted in Malta by an unknown artist. Charles portrait courtesy Jane Austen’s House Museum. 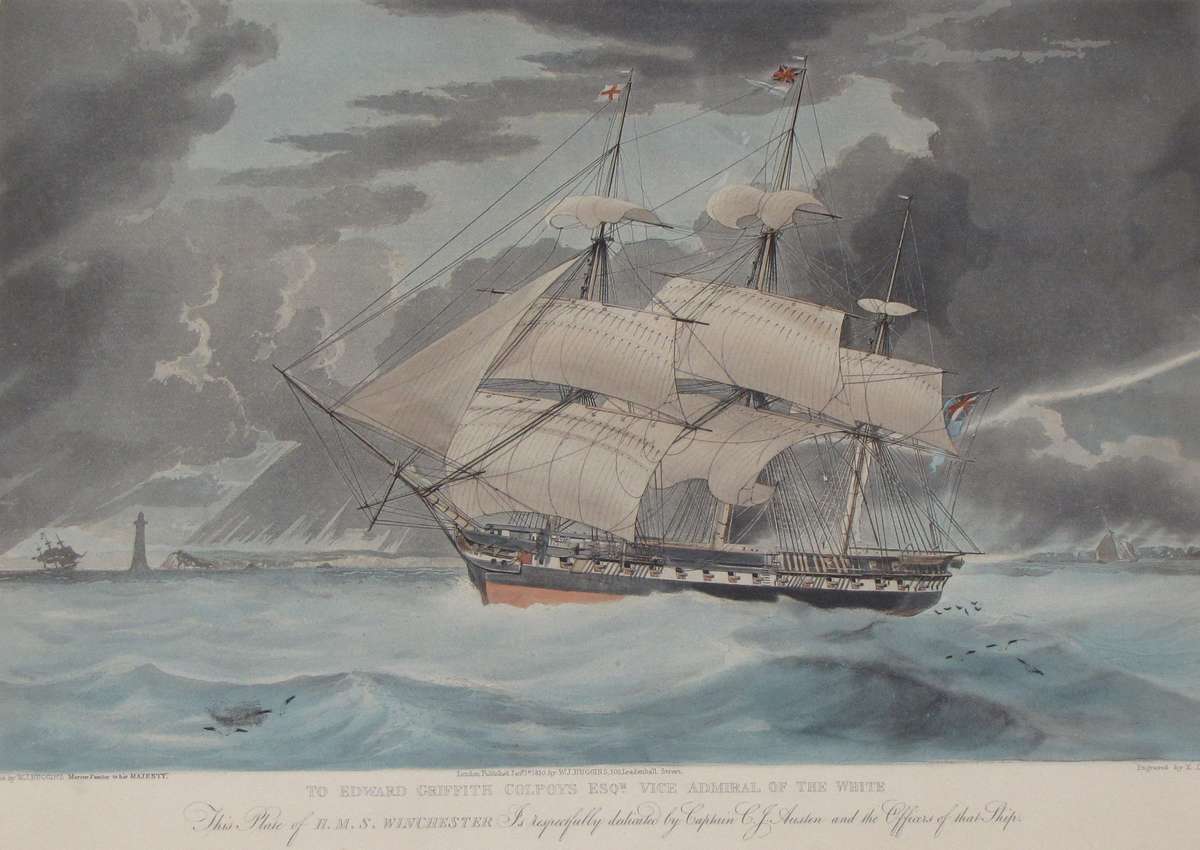 Sensible, stoic and thoroughly decent Anne is the daughter of status-obsessed widower Sir Walter Elliot, heir to grand Kellynch Hall and a fine rural income that he has fecklessly and extravagantly mismanaged. This forces them and a snobbish eldest daughter to remove to an elegant but much smaller residence in fashionable Bath. The move, and the repayment of debts, is financed by leasing Kellynch Hall to a retired Admiral of the White and veteran of Trafalgar. Admiral Croft’s gentlemanly birth, assisted by his naval prestige and the staggering fortune that prize-money built, give him easy entry into society. Mrs Croft has followed him loyally and lovingly throughout his long career, living with him on his ships as the wives of Royal Navy commanders could in those times, if they chose.

The couple are kind and down to earth, but for Anne their arrival revives an eight-year-long heartache. For Mrs Croft is the sister of the man she had loved and lost, Captain Frederick Wentworth. He and Anne had fallen in love when she was 19 and he was a spirited, daring and already successful young naval officer likely to rise in the ranks. As yet, though, Frederick has no fortune, no significant inheritance and no ‘connexions’ to speed his rise. Anne’s father thinks him beneath her, while her trusted confidant and godmother Lady Russell is only slightly less status-conscious and is wary of his youthful impetuosity. It’s her persuasion that convinces Anne, reluctantly, not to follow her heart, and gives the novel its name. Anne dutifully and sorrowfully refuses his proposal.

She goes into a long decline, uninterested in other suitors, while Frederick Wentworth goes on to brilliant success in Britain’s wars. He returns now with a fortune in prize money of £25,000 – enough for, let’s say, a trophy home close to Sydney Harbour and a mixed share and property portfolio to retire on in comfort. He’s as eligible as can be, handsome, dashing and still single, and the younger beauties of Anne’s social circle naturally set their sights and fluttering hearts upon him. Though his heart is still bruised and resentful from Anne’s rejection, it’s now time for him to find an appropriate wife and there are plenty of prospects on hand.

After this preliminary briefing Jane Austen keeps us on tenterhooks for the rest of the novel as mischance and misinterpretations of comments, glances and deeds endlessly postpone the opportunity for Captain Wentworth to rekindle his admiration for Anne’s qualities of character, while she nobly makes way for those pretty young rivals who might bring him the happiness she denied him. There are of course plots and subplots, including Anne being wooed by someone well-heeled whom everybody – including Anne for a while – mistakes as being suitable for her. Turns out he’s an utter cad.

This all takes place between the rural properties and villages of Somerset and the elegant quarters of Bath, with a wonderful vignette of seaside Lyme Regis where we meet Captain Wentworth’s friends, more of Austen’s warmly portrayed naval characters. There’s the bereaved young Captain Benwick, whose shared tastes in the English poets make it seem for a while that he might be the one to save Anne from spinsterhood, when Captain Wentworth is just on the verge of being captured as a prize man-of-war by one of the fair young ladies. Kindly, practical Captain and Mrs Harville are settling near the Cobb in Lyme, in very modest circumstances since he was lamed by a war injury and is ashore on half-pay. But once again, it’s the mariners to whom Jane Austen allots the most commonsense and sensibility, the least pride and prejudice.

One of the most memorable speeches of the entire novel for me is Mrs Croft’s advocacy of her life on men-of-war of the British Admiralty, made to a privileged and pampered circle who cannot have the slightest conception of the lives of the sailors who defend them and make Britannia great.

‘I do assure you, ma’am,’ pursued Mrs Croft, ‘that nothing can exceed the accommodations of a man of war; I speak, you know, of the higher rates. When you come to a frigate, of course, you are more confined – though any reasonable woman may be perfectly happy in one of them; and I can safely say, that the happiest part of my life has been spent on board a ship. While we were together, you know, there was nothing to be feared. Thank God! I have always been blessed with excellent health, and no climate disagrees with me. A little disordered always the first twenty-four hour of going to sea, but never knew what sickness was afterwards.’

So do read Persuasion this year, two centuries after Jane Austen died unmarried aged 41, to find out (if, like me, you’d forgotten, and even more so if you’ve not yet read it) how it all worked out for that brave Captain Wentworth and the worthy Anne Elliot. You might go on to Mansfield Park, Austen’s other novel with prominent naval motifs. And when you’ve finished you might file them up there on your bookshelf next to Master and Commander.

View all posts by Jeffrey Mellefont→
Posted in: Arts and Culture
↑