Clash of the Carriers: The Battle of the Coral Sea

Three navies, four aircraft carriers, 255 aircraft and 76 ships in a four-day battle that changed naval warfare forever. Eight ships sunk, 161 aircraft destroyed and 1622 men killed in a battle that should never be forgotten. 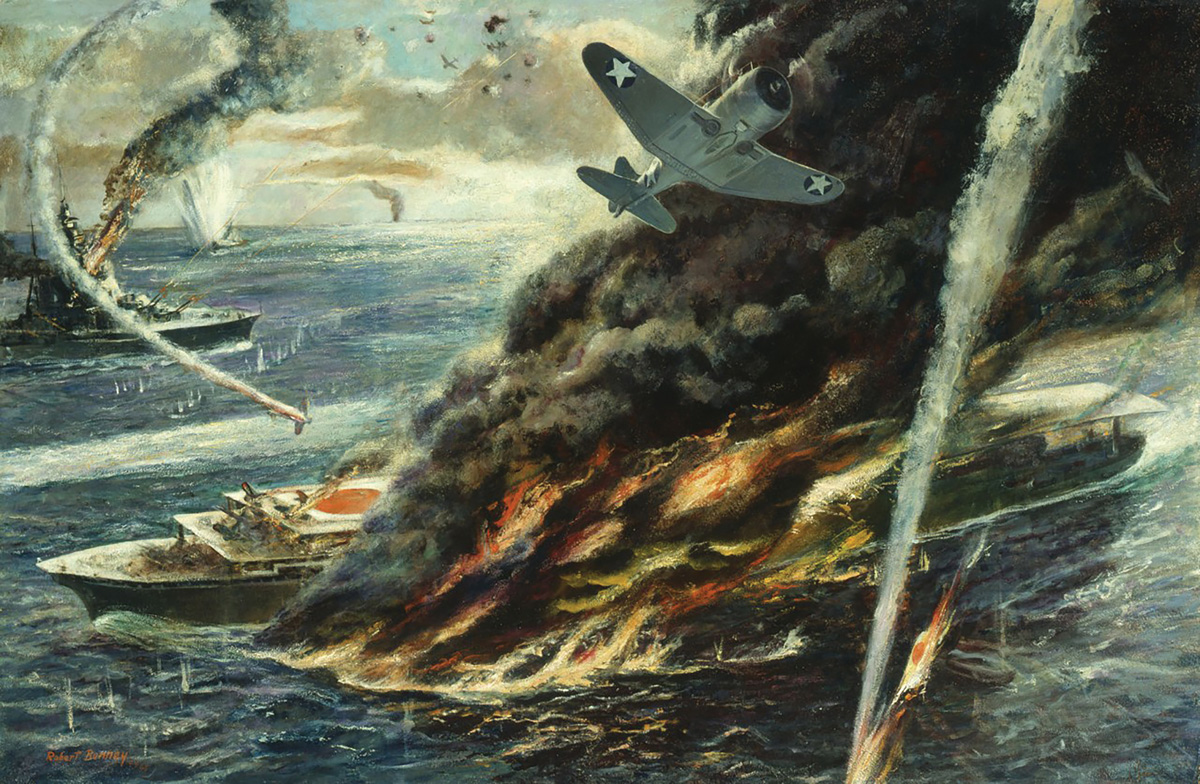 Fought between combined United States and Royal Australian naval and air forces and the Imperial Japanese navy, this was the world’s first sea battle between aircraft carriers. Literally ‘fought in the air’, it was also the first naval battle in which opposing ships neither saw nor fired on each other.

After their success attacking Pearl Harbour and Darwin, the Japanese plotted to invade Port Moresby in New Guinea and to control supply lines between the USA and Australia in the Coral Sea, but their plans for Operation Mo Sakusen were intercepted by Allied codebreakers stationed in Melbourne.

In early May two mighty naval fleets assembled in the Coral Sea, Japan’s in the north and the combined US and Australian fleet to the south. 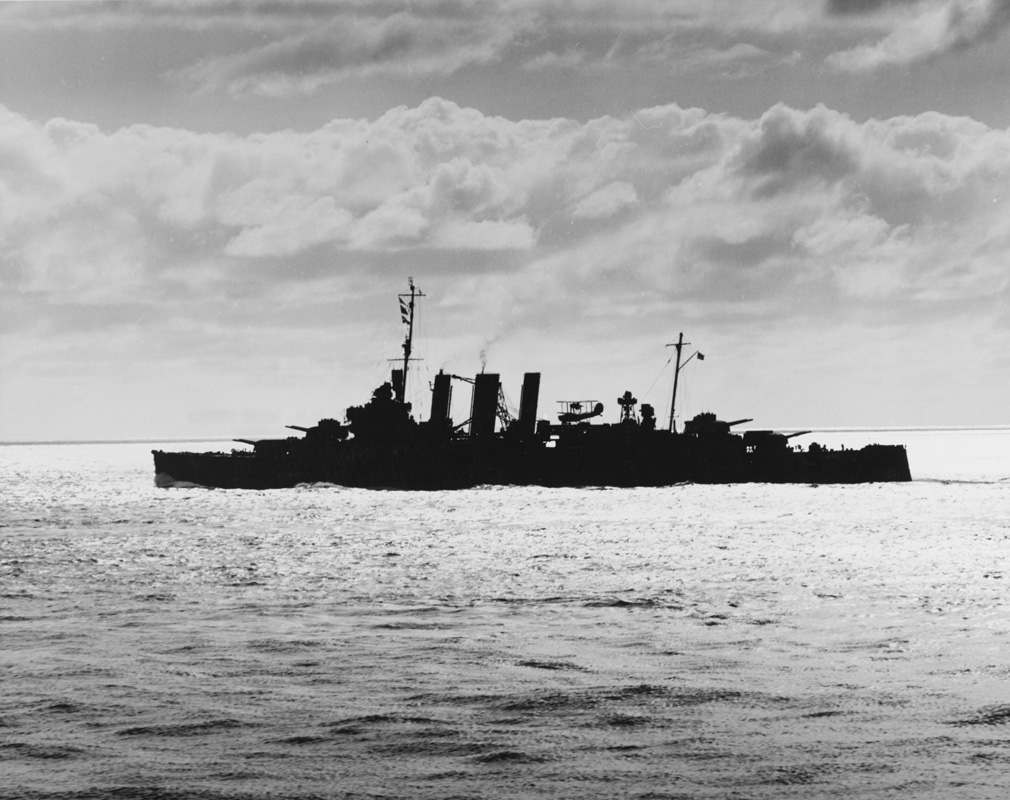 On the opening day of the battle, aircraft from the American carrier USS Yorktown bomb and destroy the Japanese seaplane support base on the island of Tulagi in the Solomon Islands. 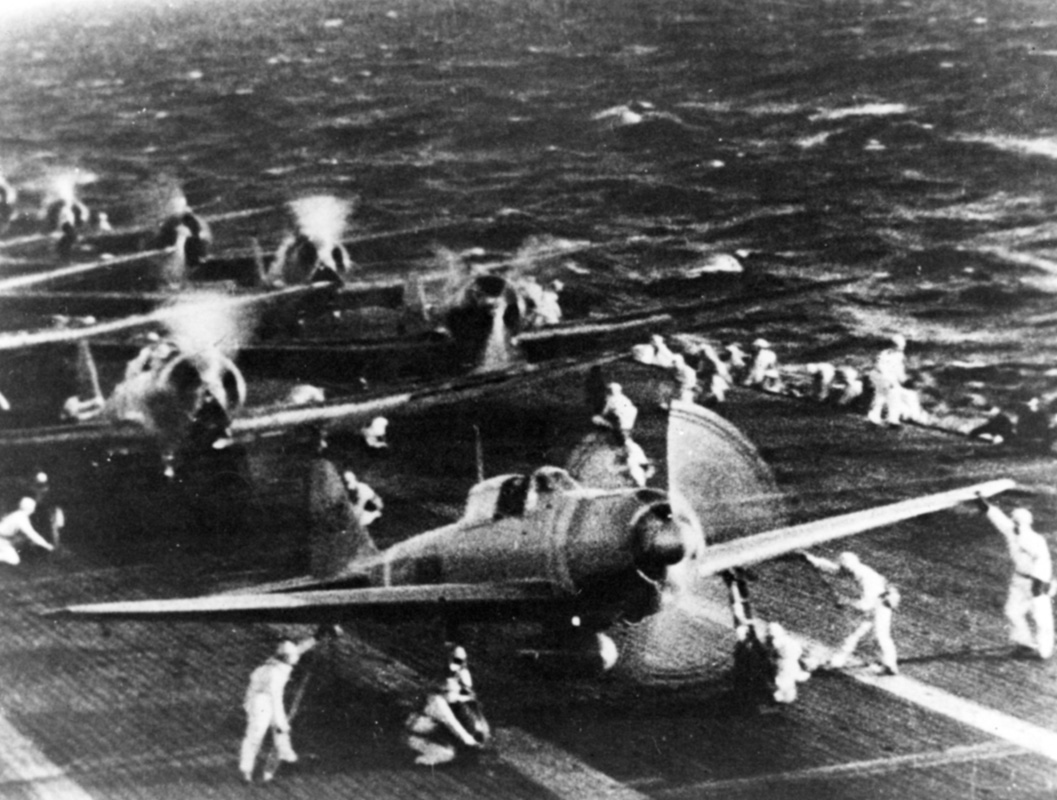 Japanese naval aircraft prepare to take off from an aircraft carrier (reportedly Shokaku) to attack Pearl Harbor during the morning of 7 December 1941. Plane in the foreground is a Zero Fighter. This is probably the launch of the second attack wave. The original photograph was captured on Attu in 1943. Image: Official US Navy photograph collection of the National Archives, Naval History and Heritage Command BD-G-71198.

Over the next two days, carrier aircraft from both sides comb the sea searching for their enemy. 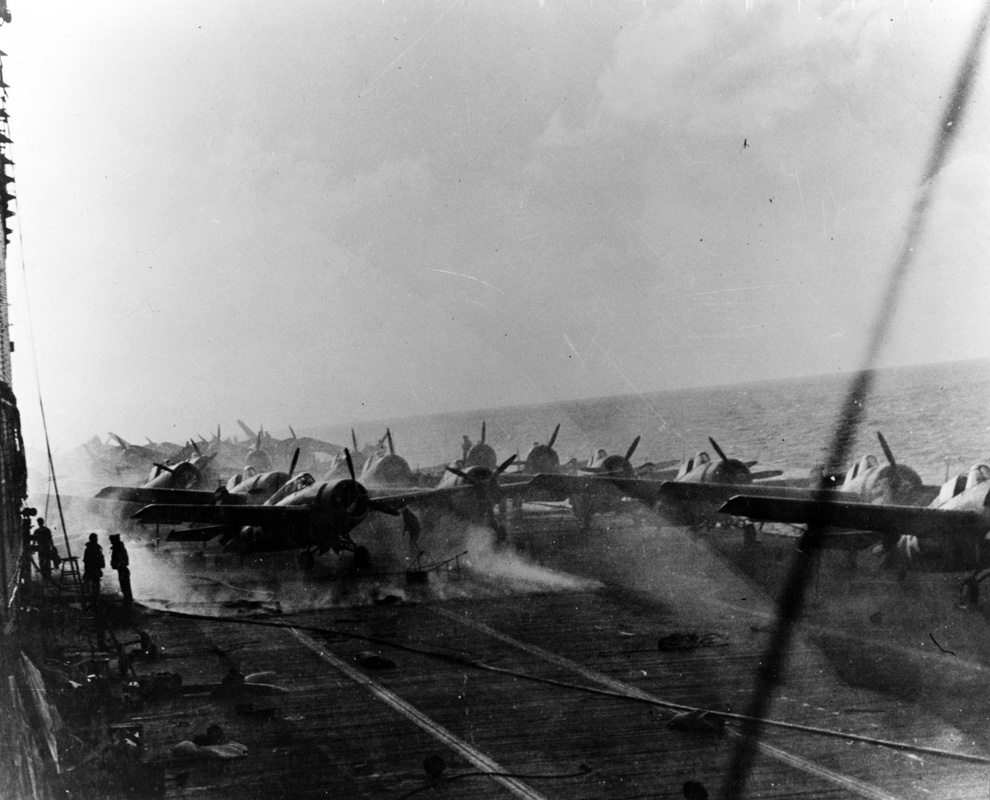 View on the flight deck of USS Lexington on 8 May 1942, during the Battle of the Coral Sea. Smoke is rising around the after aircraft elevator from fires burning in the hangar. Image: Official US Navy photograph collection of the National Archives, Naval History and Heritage Command BD-G-16802.

At the same time, to the east, Japanese aircraft attack and sink the destroyer USS Sims and damage the tanker USS Neosho, while American aircraft sink the Japanese light aircraft carrier Shōhō. 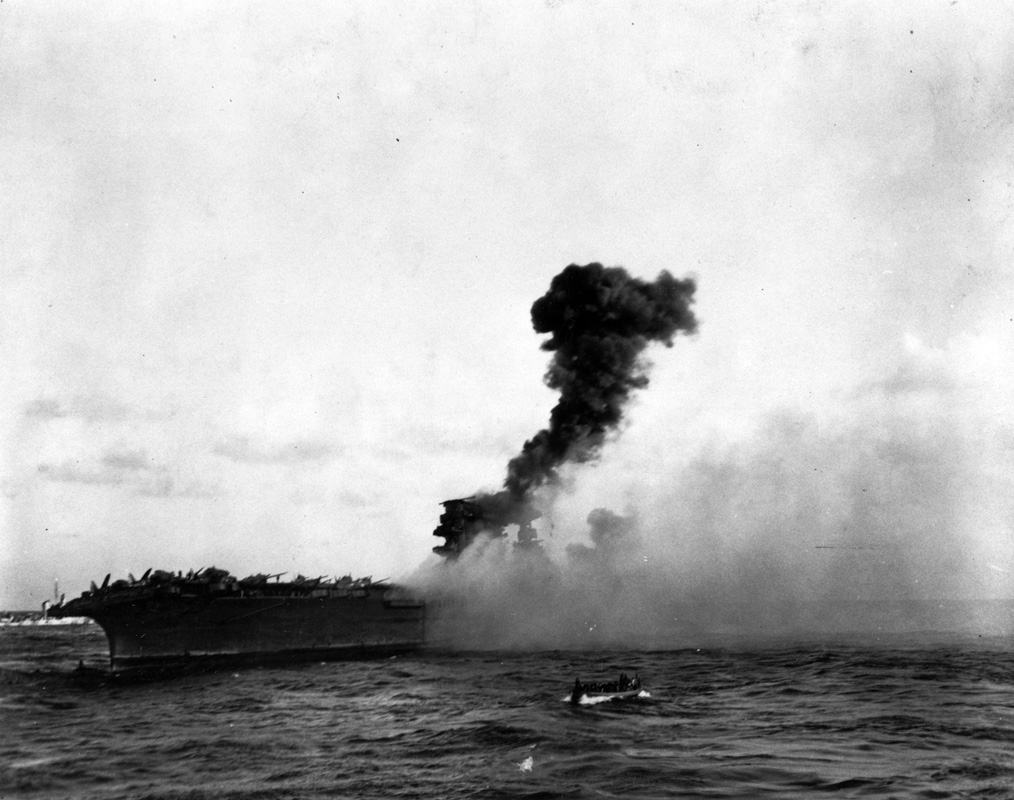 An explosion amidships on USS Lexington (CV-2), while it was being abandoned during the afternoon of 8 May 1942. This may be the explosion reported to have taken place at 17:27 hrs, which was followed by a great explosion aft as stowed torpedo warheads detonated on the hangar deck. Note whaleboat underway in the foreground. Image: Official US Navy photograph collection of the National Archives, Naval History and Heritage Command BD-G-7406.

In the early morning Japanese and American reconnaissance places spot their foe almost simultaneously, and scores of fighter, torpedo and dive bomber aircraft are launched from the carriers of both sides.

In the ensuing melee the Japanese carrier Shōkaku is heavily damaged, as are the two American carriers Yorktown and Lexington. With only a damaged carrier remaining, Japanese carrier force commander Vice Admiral Takeo Takagi withdraws from the battle, not knowing that a slow fuel leak on Lexington caused by a Japanese bomb will eventually create a massive explosion and uncontrollable fire that will lead to its being abandoned and scuttled. 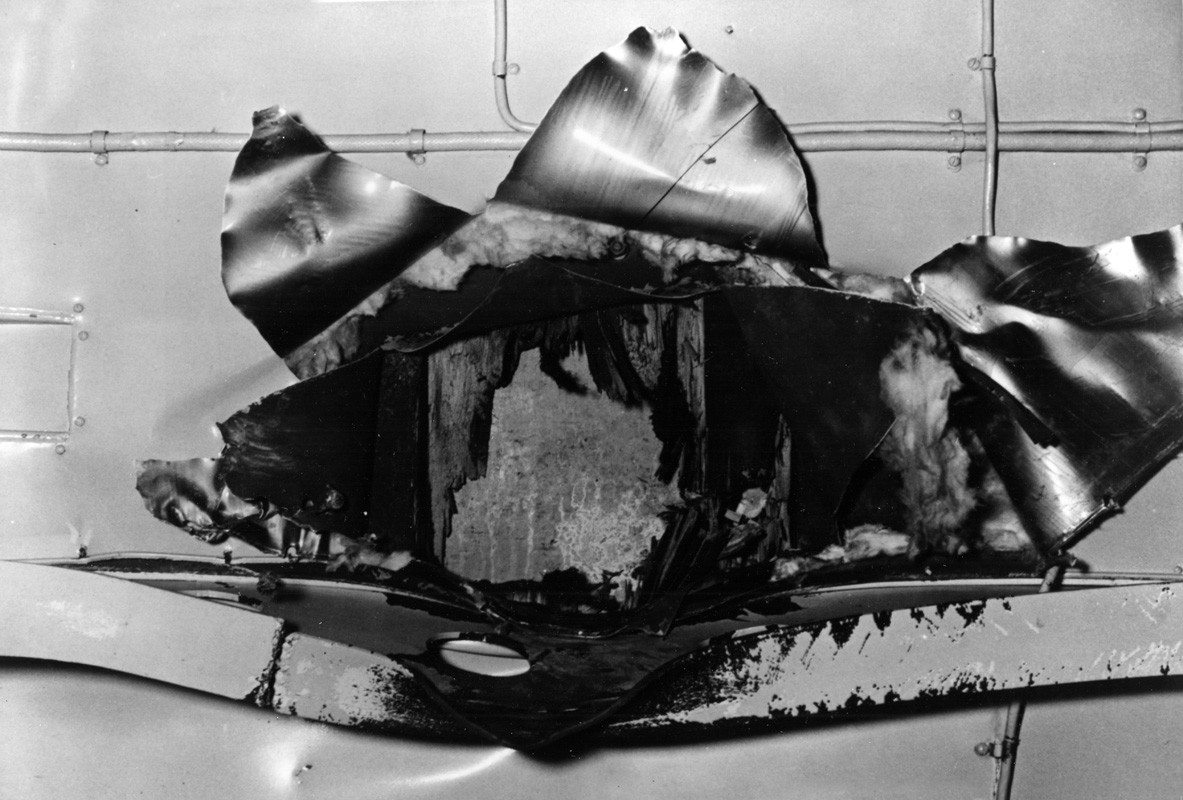 View of the underside of the flight deck structure of USS Yorktown showing the impact hole made by the Japanese bomb that struck the ship during the Battle of Coral Sea, 8 May 1942. Image: Official US Navy photograph collection of the National Archives, Naval History and Heritage Command NH 95572.

Japan claimed a tactical victory, but the American/Australian alliance tempered in battle won in strategic terms. It now had the measure of the Imperial Japanese Navy and had smashed its aura of invincibility. The invasion of Port Moresby was thwarted, Australia was safe and for the from the first time the Japanese Empire’s advance through the Pacific was stopped.

1942 was the crucial year in the Pacific War. The year that began with the aftermath of Pearl Harbor, the fall of Singapore and the devastation of Darwin ended with the Allied victories in the Coral Sea and at Midway and Guadalcanal. Though many dark days still lay before them, the Allies maintained the offensive until the end.

The Japanese carrier Shōkaku and the USS Yorktown were both badly damaged in the battle. But Yorktown was repaired in time to join the next clash of the carriers in the decisive Battle of Midway in June 1942. 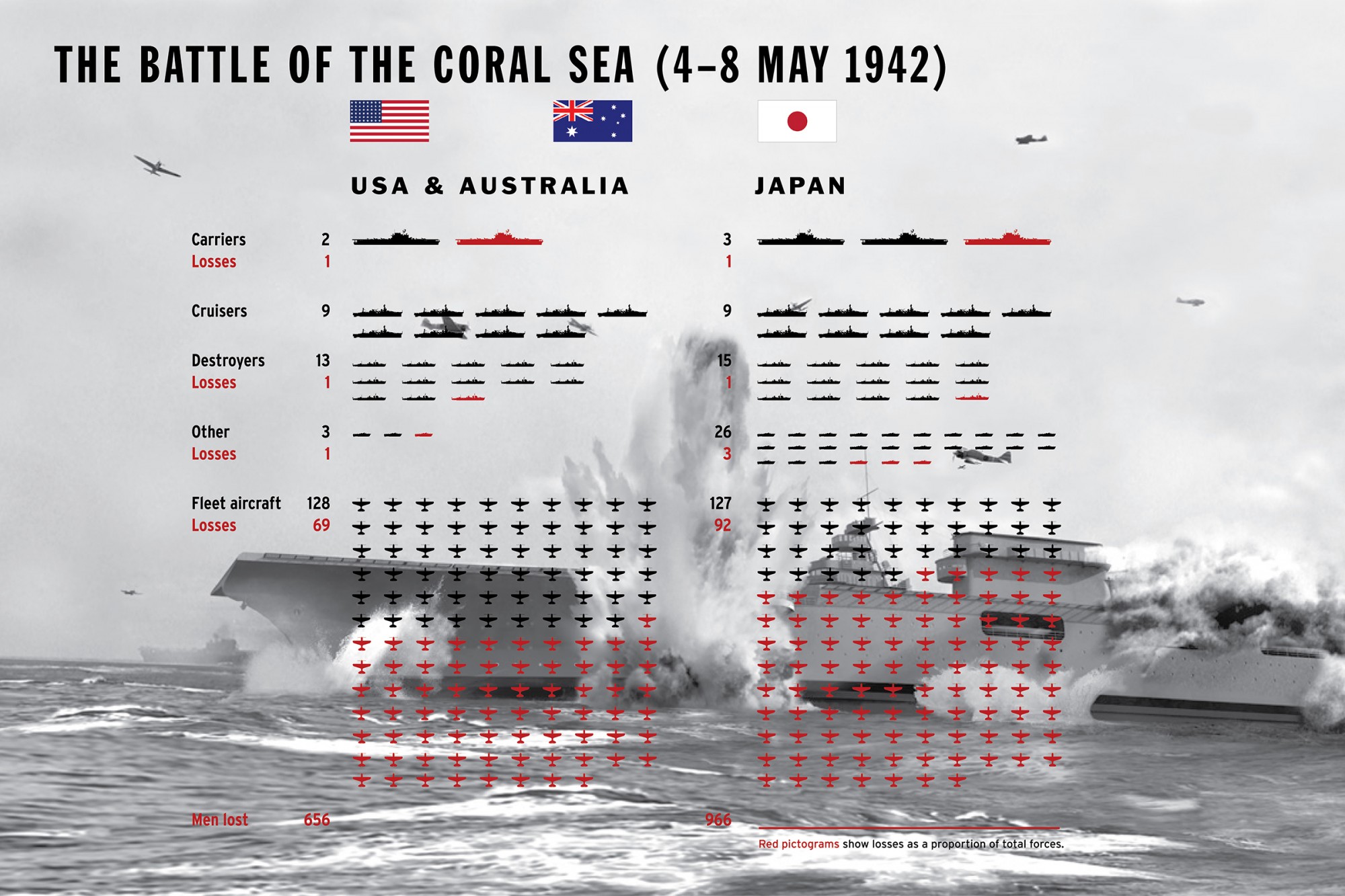 Battle of the Coral Sea, fleets and loses. Image: ANMM.

View all posts by James Hunter→

View all posts by Richard Wood→
Posted in: Digital Stories , Navy and defence