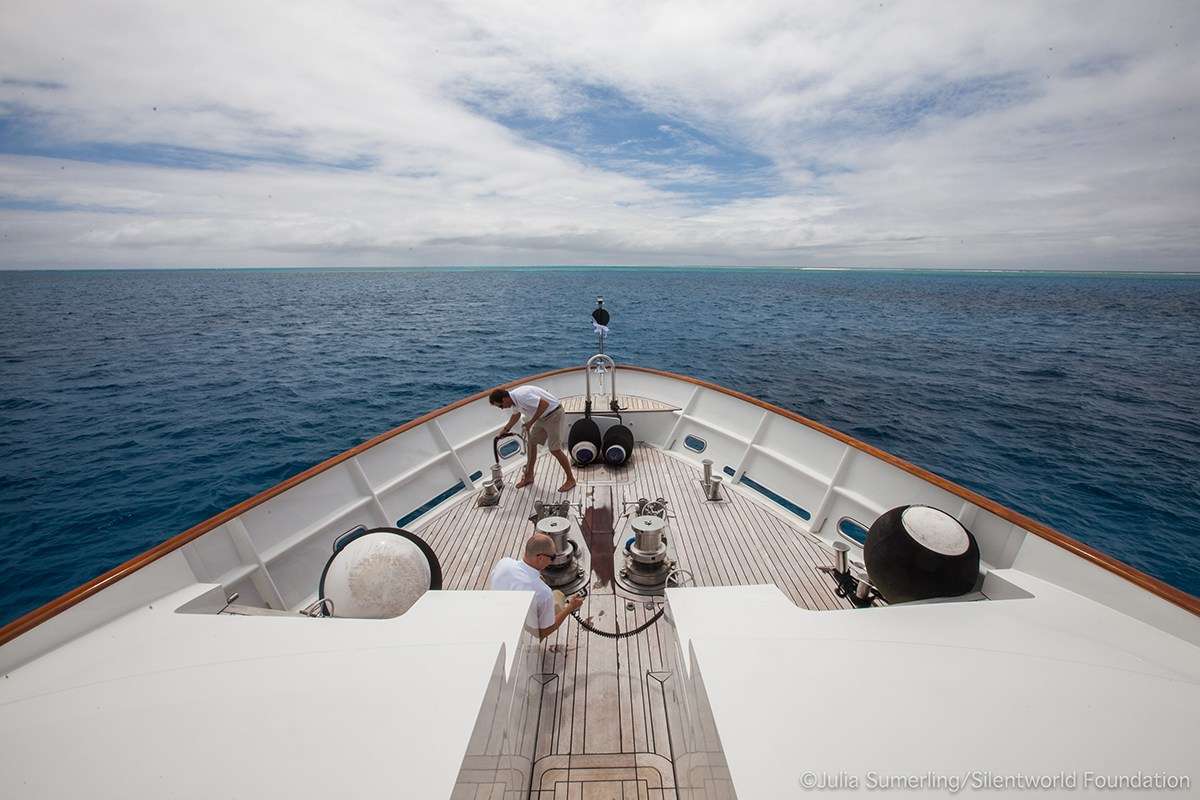 Observatory Cay and part of the ‘foot and ankle’ are visible from the bow of Silentworld shortly after its arrival at Kenn Reefs. Image: Julia Sumerling/Silentworld Foundation.

The Australian National Maritime Museum and Silentworld Foundation recently led an expedition to the Australian Coral Sea Territory to conduct an archaeological survey of historic shipwrecks lost at Kenn Reefs during the nineteenth century. The Kenn Reefs expedition is a continuation of an ongoing collaborative project between the museum and Silentworld Foundation that commenced in 2009 and led to the discovery that same year of the wreck of the colonial government schooner Mermaid (lost in 1829 on what is now known as Flora Reef). No less than eight vessels are known to have wrecked at Kenn Reefs between 1828 and 1884, and most grounded in relatively close proximity to one another on the largest of the southernmost reefs in the chain, as it was located within an oft-travelled shipping route, but poorly charted until the mid-nineteenth century.

Project team members arrived in the coastal Queensland town of Bundaberg on 8 January to rendezvous with Silentworld Foundation’s research vessel Silentworld. At 370 tons and 39.5 metres in length, Silentworld is a state-of-the-art oceangoing watercraft outfitted with the accommodation and equipment necessary to support the expedition to Kenn Reefs, which are located more than 500 kilometres northeast of Bundaberg in the approximate centre of the Coral Sea. Upon arrival, we transferred our field equipment (including dive gear, and remote-sensing devices such as magnetometers, side-scan sonar and an aerial drone) aboard Silentworld and moved into our respective berths. We then set about unpacking and preparing gear, and settling into our accommodation for the next 10 days. To describe the berths as ‘comfortable’ would be a gross understatement—they were hands-down the most spacious and best-outfitted cabins I have experienced in nearly 20 years as a maritime archaeologist. Add to that the amazing food on offer and unparalleled hospitality and professionalism of the Silentworld crew, and it was a very simple matter for the research team to quickly and happily make itself at home.

One of the first orders of business the following morning was to put Silentworld Foundation’s small survey vessel and tender, Maggie III, in the water. Maggie III was the workhorse of the expedition — used primarily to deploy remote-sensing equipment such as magnetometers and side-scan sonar to search for shipwreck sites, but also as a diving platform. Because of its diminutive size, Maggie III was shipped overland from Sydney to Bundaberg, and accompanied by a shipping container filled with the project’s largest and heaviest equipment. The container was lifted from the trailer, opened, and its contents transferred to Silentworld. Maggie III was then removed with a large hoist, lowered into the water, fuelled to capacity, and outfitted with a towing harness for its journey into the Coral Sea (rather than make the trip under its own power, Maggie III was towed behind Silentworld to and from Kenn Reefs). 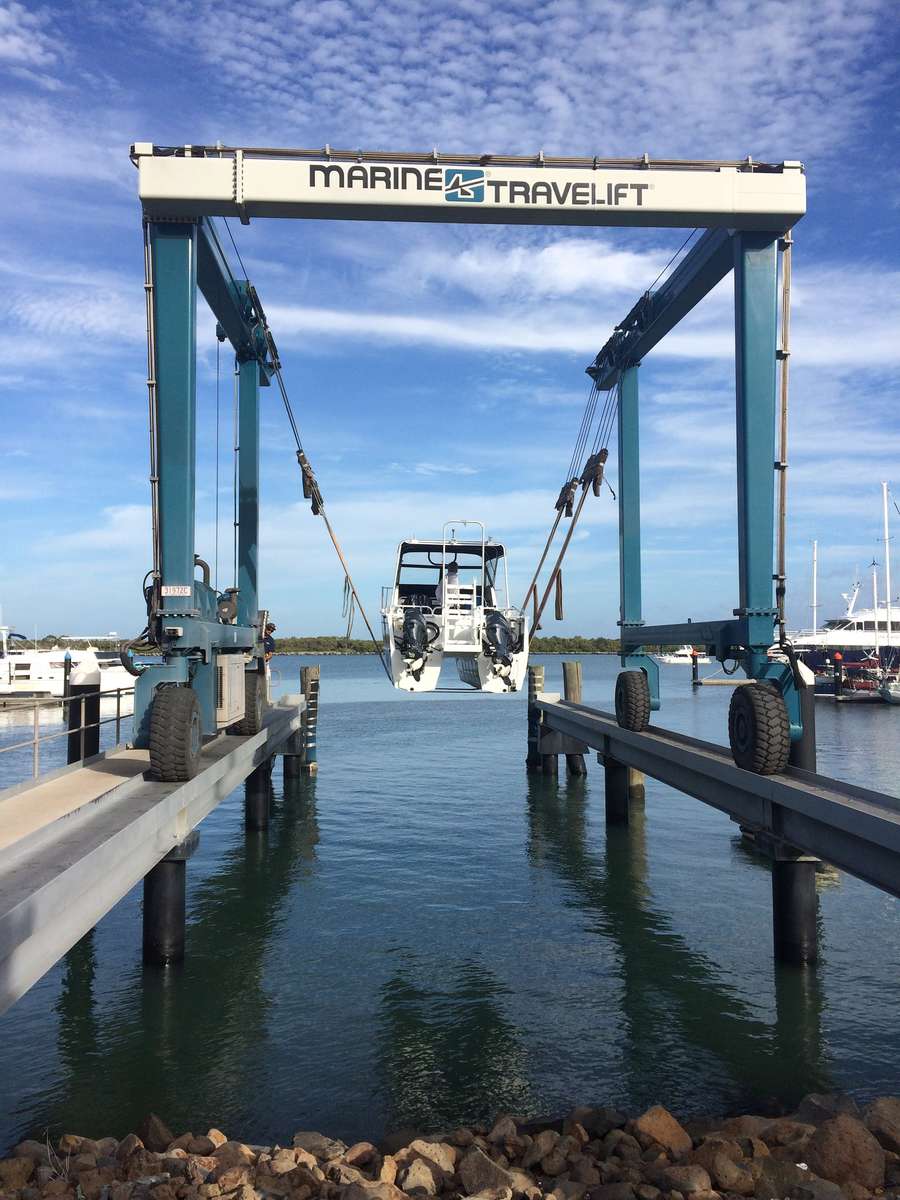 The expedition’s survey vessel, Maggie III, is lowered into the water at Bundaberg in preparation for the journey to Kenn Reefs. Image: James Hunter/ANMM.

In the early hours of 10 January, Silentworld departed Bundaberg and set a course for Kenn Reefs. The project was originally slated to commence on 5 January, but inclement weather forced us to delay departure for nearly a week. As it was, the seas were still a bit unsettled, with the result that we encountered waves averaging two metres or more during the crossing. Thankfully, Silentworld is outfitted with stabilisers, which almost completely eradicated the vessel’s roll in the swell and made the outbound journey much more comfortable as a result.

Approximately 30 hours after departing Bundaberg, we arrived at Kenn Reefs on the morning of 11 January and anchored in a large lagoon just north of Observatory Cay, one of the reef complex’s largest sand cays. Kenn Reefs are located outside the extreme eastern edge of the Great Barrier Reef, and comprise a large coral seamount reef system created by part of a submerged geological feature called the Kenn Plateau. Kenn Plateau is characterised by a series of deep water (1000 – 3000 metre) bathymetric troughs, marginal plateaus, and volcanic seamounts. Kenn Reefs are formed by the exposed edge of one of these seamounts, as are other reef systems in the Australian Coral Sea Territory, including Wreck Reefs, Frederick Reef and Cato Reef. 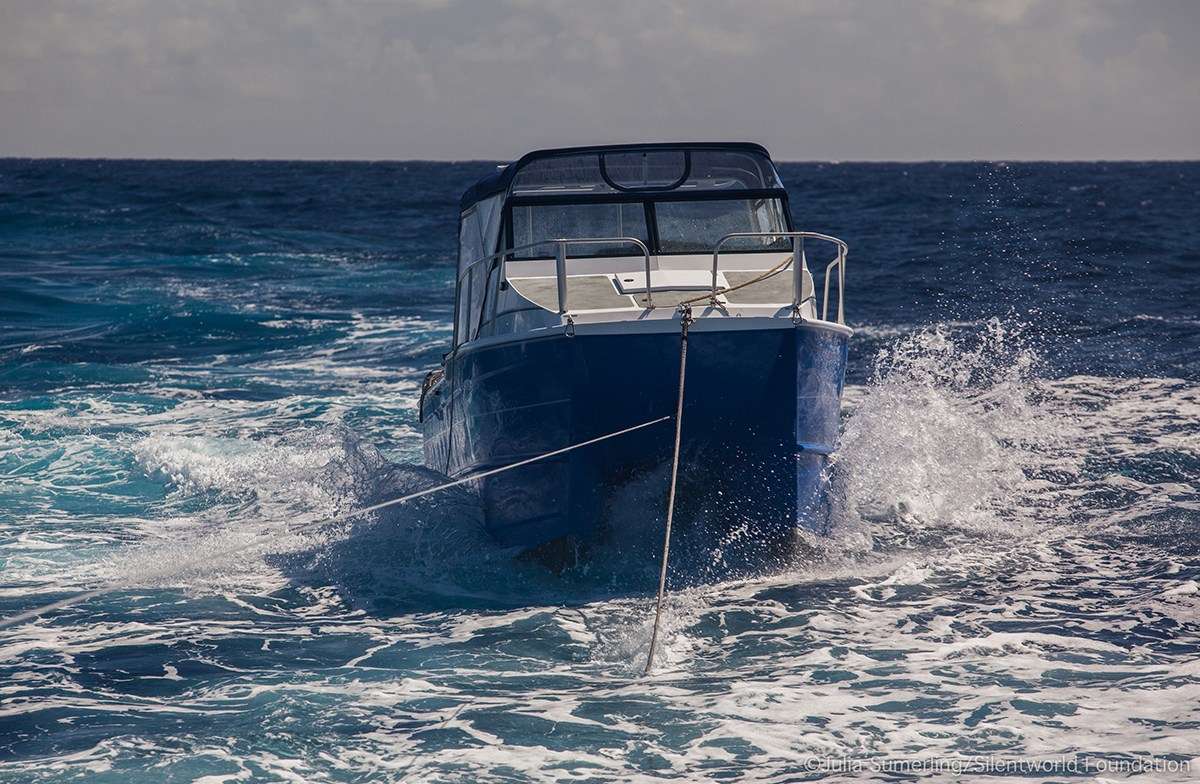 The complex covers an area of approximately 40 square kilometres and consists of four main reefs that together have the appearance of a backwards capital letter ‘L’. Individually, the reefs are known by the colloquial names ‘toe’, ‘foot and ankle’, ‘shin’, and ‘leg’. The ‘toe’, ‘foot and ankle’ and ‘shin’ are the southernmost reefs in the complex and share a common rock/coral geologic shelf that is separated from the ‘leg’ by a 5.3-kilometre wide channel with average water depths exceeding 40 metres. The smallest and westernmost reef is the ‘toe’, which is often identified on historic and contemporary nautical charts as the ‘South Western Extreme’. The northernmost (‘leg’) reef also has an alternate identifier—the ‘North Western Extreme’—and is characterised by a completely enclosed lagoon that can only be entered with very small shallow-drafted boats. The sea breaks over all of the reefs in the complex at high water, and the tops of all save that of the ‘toe’ are exposed at half-tide. Four sand cays are present at Kenn Reefs, three of which are at least partially exposed at high tide. Observatory Cay is the second largest of the group, and also features the second highest point (approximately two metres) above sea level in the entire reef complex. The sand cay at the South Western Extreme is slightly larger, but completely surrounded by reef and far less accessible. 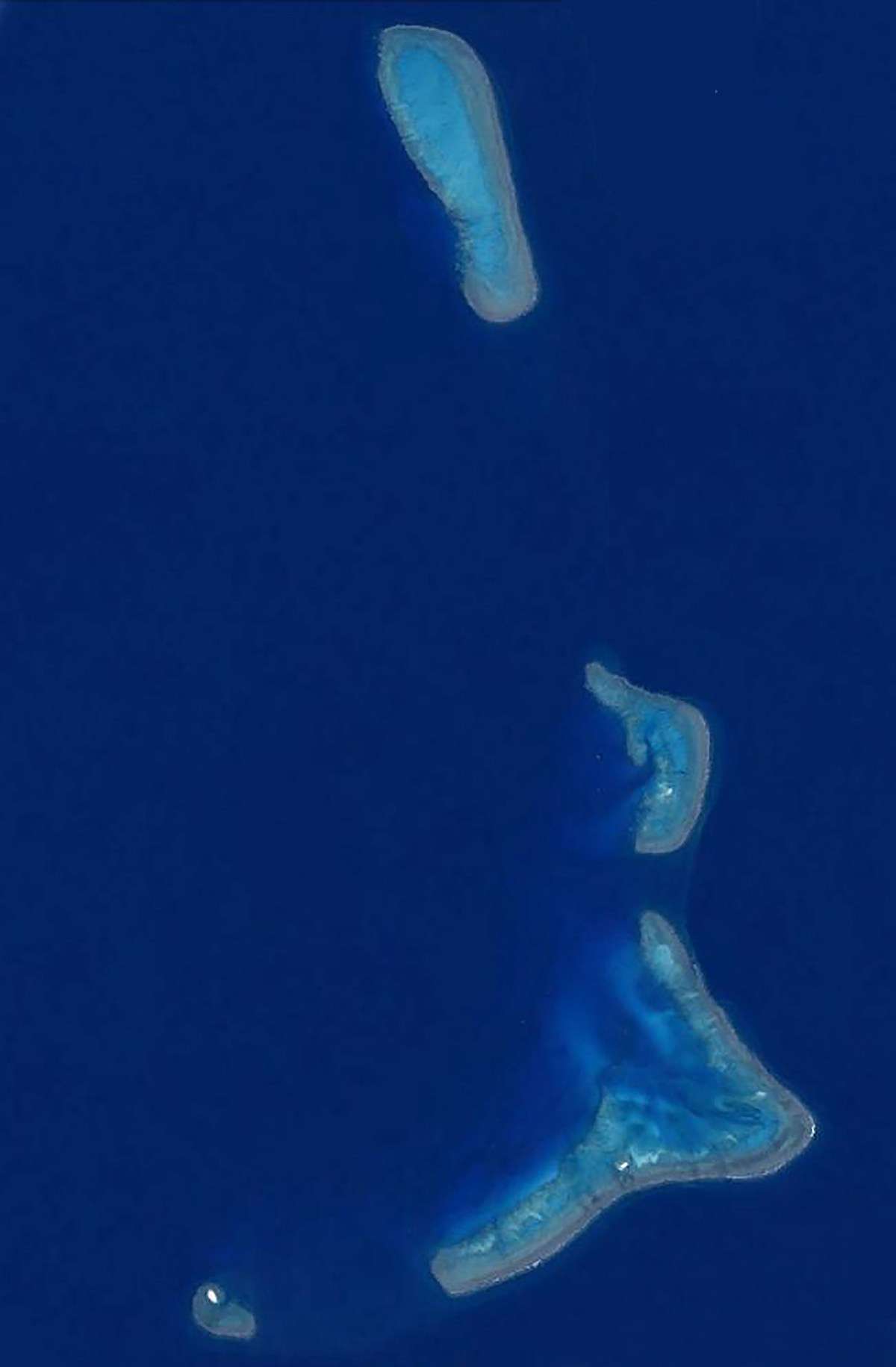 Familiarity with the geology and arrangement of Kenn Reefs was important because one of our project goals was to conduct a magnetometer survey of the immediate inshore and offshore areas of the entire complex. To this end, we hit the ground running on the first day and investigated the shallow lagoon to the west of Observatory Cay in an effort to locate a shipwreck site first documented by Warren Delaney and Brook Batley of the Queensland Museum in 1987. The wreck comprised a linear scatter of iron frames (suggesting a vessel of ‘composite’, or wooden plank over iron frame, construction), copper-alloy fasteners and sheathing, and bricks. Based on a review of archival sources, Delaney hypothesised that the shipwreck could represent the remnants of Lion, an American whaling ship that grounded on a reef in the Coral Sea in December 1856. During a subsequent visit to Kenn Reefs in 2003, Delaney was unable to relocate the site, so we placed particular emphasis on confirming its position and identity. 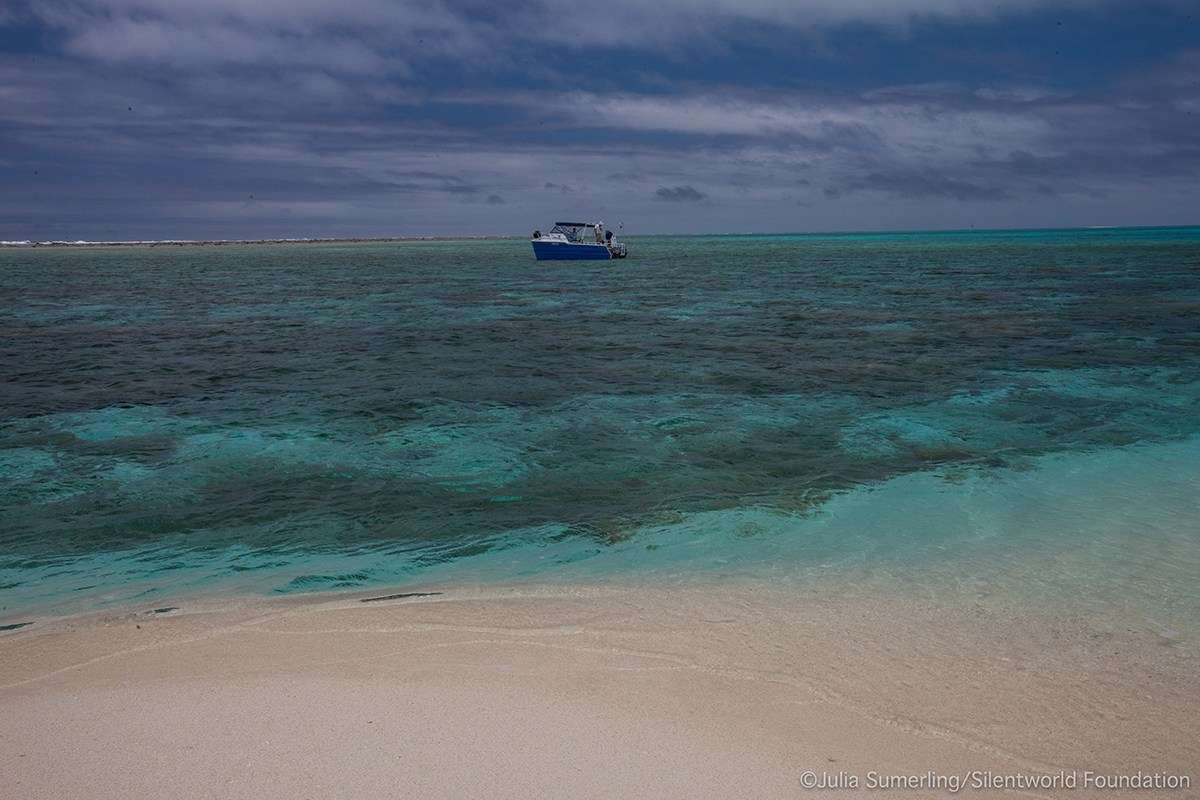 Maggie III and crew at work conducting a magnetometer survey to the west of Observatory Cay. Image: Julia Sumerling/Silentworld Foundation.

A magnetometer is a device that detects anomalies in the earth’s magnetic field generated by the presence of iron. Because most shipwreck sites contain some form of iron hardware — which may range in size and complexity from small nails to massive anchors and steam engines — maritime archaeologists often use magnetometers as their primary search tool. 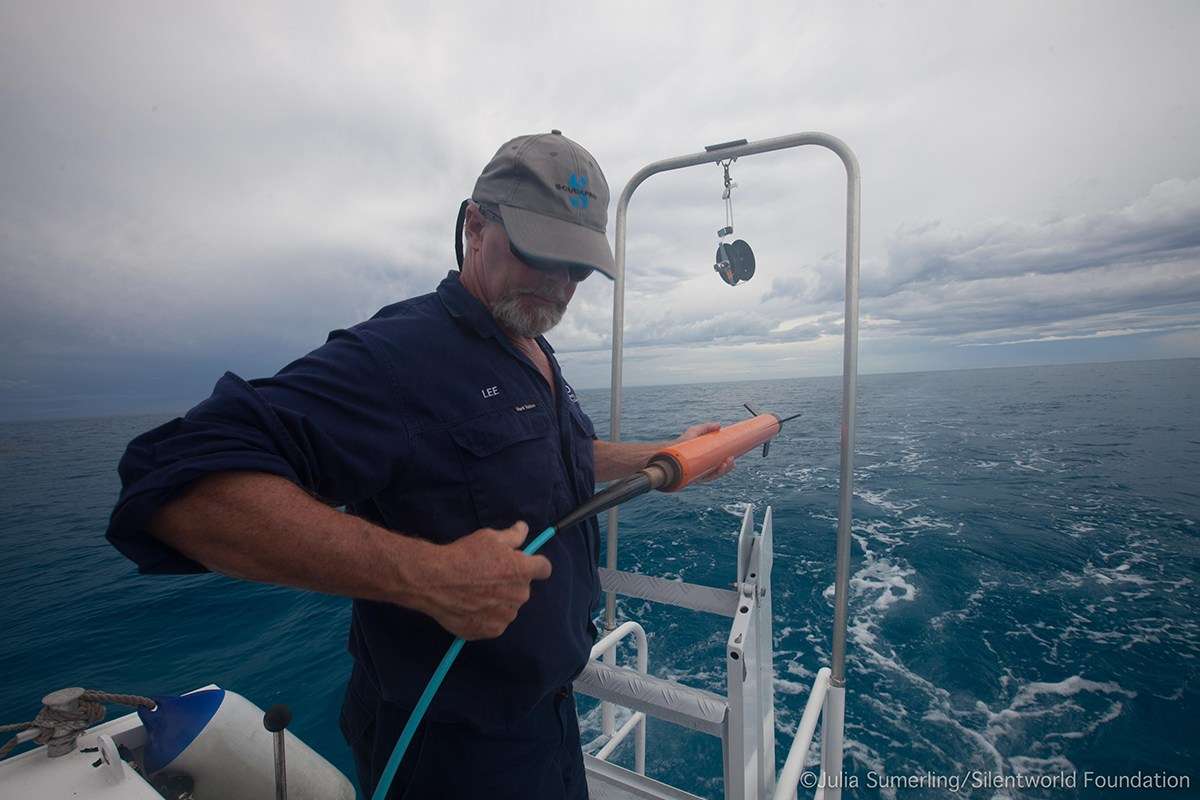 The magnetometer’s sensor is encased in a waterproof housing and either mounted to a vessel’s hull or towed behind it. Our sensor was deployed in a towed configuration, an arrangement known colloquially as a ‘towfish’. We commenced work on a falling tide, which limited the area in which we could effectively operate due to the relatively shallow depth of the lagoon around Observatory Cay. This was compounded by the presence of several coral outcrops, and many a survey lane was altered or cut short in an effort to avoid striking them with Maggie III and/or the towfish. The area west of Observatory Cay did not yield any magnetic anomalies on the first day, and—despite our best efforts—the location of Warren Delaney’s missing shipwreck site was not revealed.

A second team charged with conducting a visual and metal detector survey of Observatory Cay met with much greater success…but more about that in the next instalment!