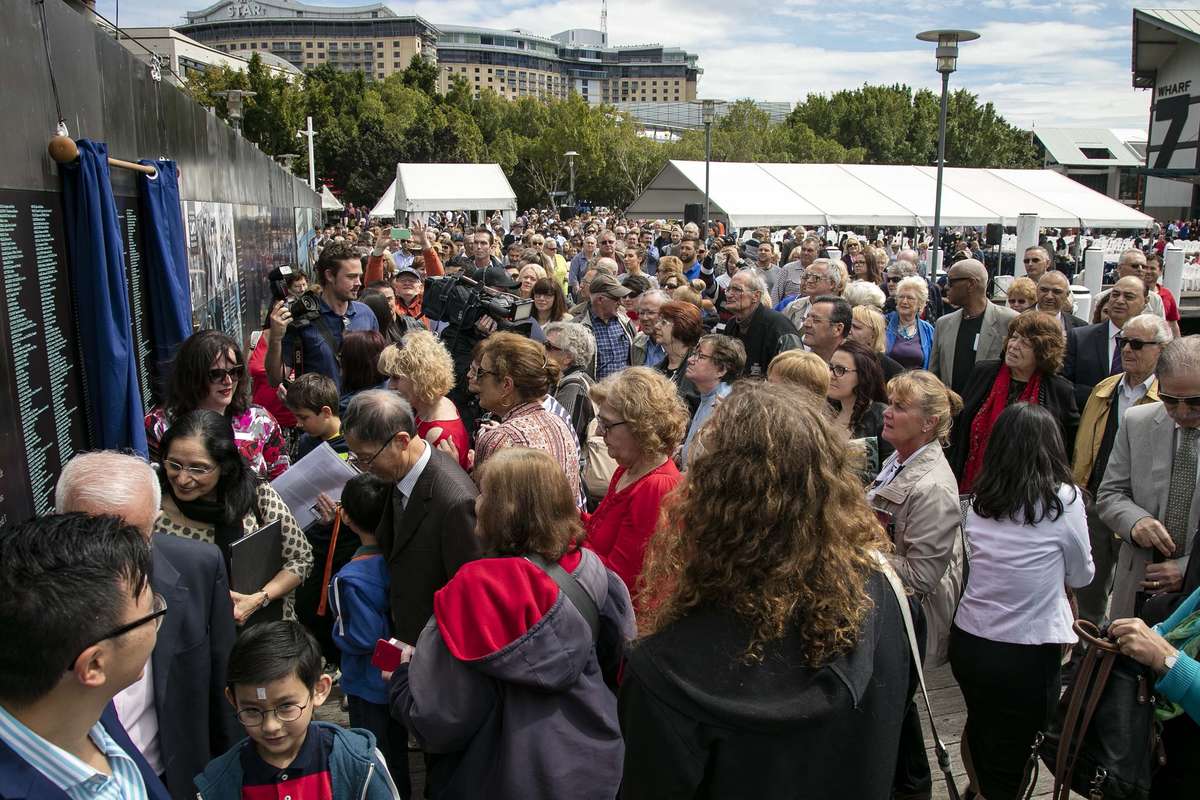 This Sunday, 25 September 2016, saw 882 new names unveiled on our migrant Welcome Wall in honour of all those who have migrated from around the world by sea or air to live in Australia. The museum unveils new names on the Welcome Wall twice a year. 2016 marks the 17th year of unveiling ceremonies, bringing the total number of names on the wall to a staggering 28,293. More than 200 countries are now represented on the Wall.

As a multicultural nation, with one in four of Australia’s 23 million people born outside Australia, the Welcome Wall is a celebration of diversity. It allows today’s Australians to pay tribute to migrant forebears, family members and friends by having their names inscribed on it. Located outdoors on the museum’s northern boundary, the wall faces Darling Harbour and Pyrmont Bay.

The special guest at the unveiling ceremony was Dr. Harry Harinath OAM Chair, Multicultural NSW who reflected on his own family’s migrant history and the importance of multiculturalism in Australia. 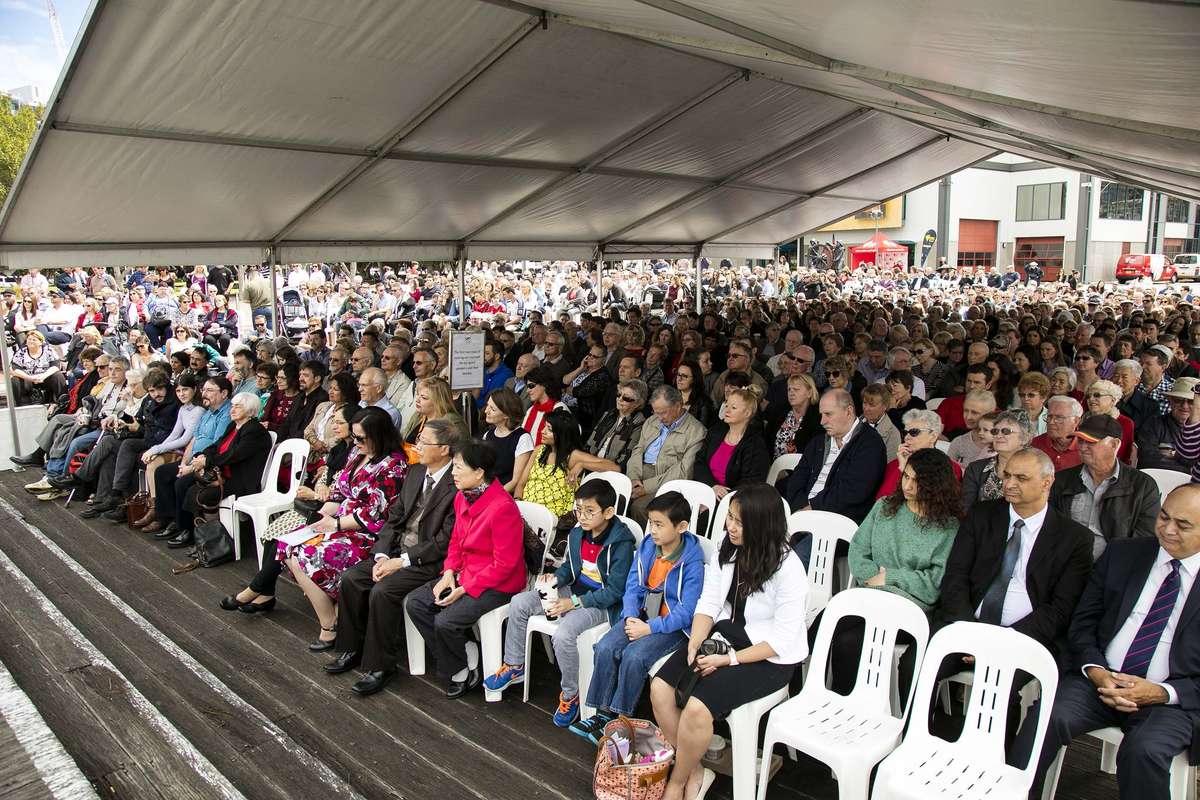 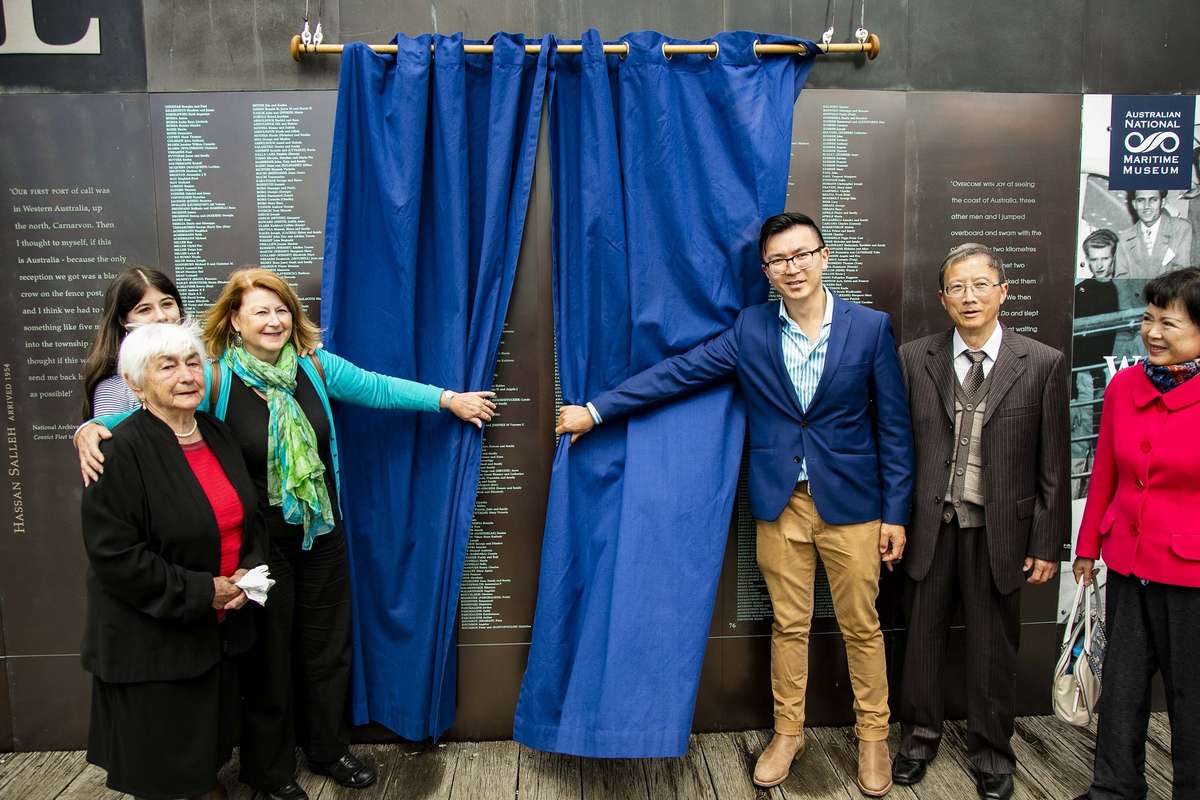 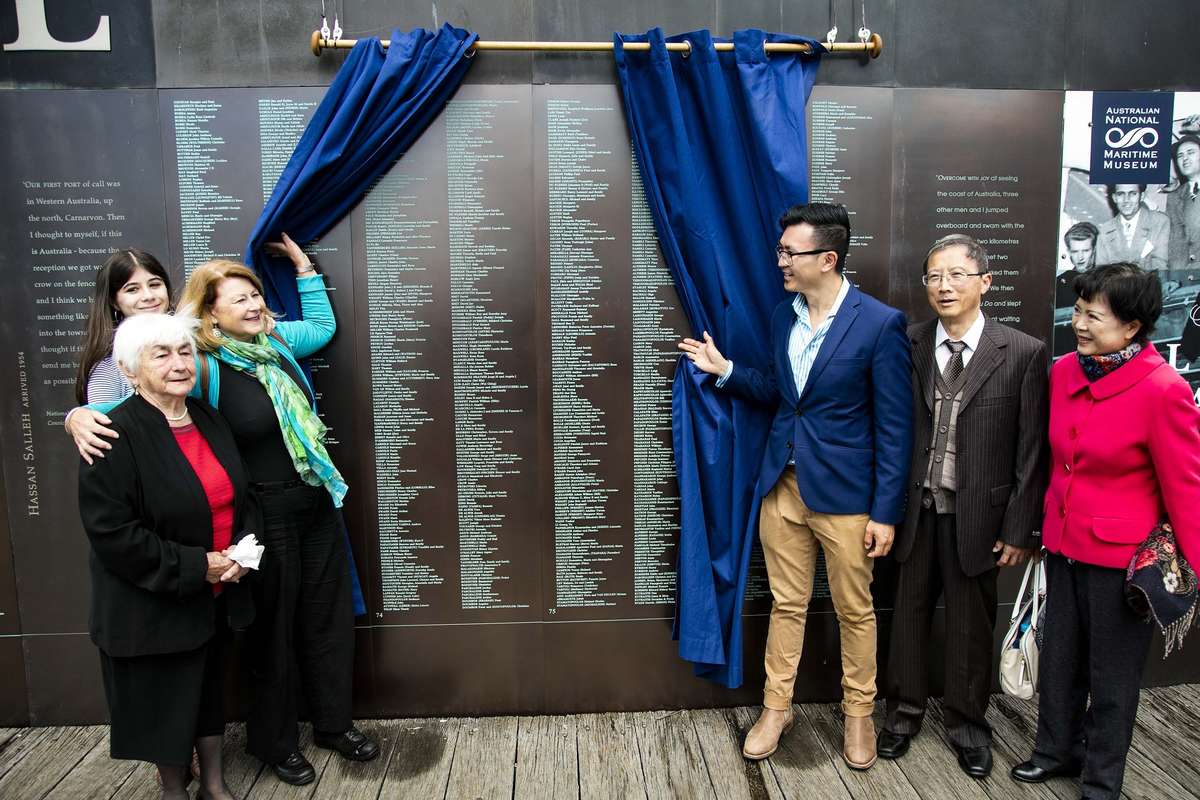 Dr. Harinath was joined by two migrant speakers who have placed names on the wall. Ilse Fait honoured her parents who were Donau Schwaben (ethnic Germans) and migrated from Serbia in the mid-1950s and Lin Hu shared the story of his family’s migration from China in the 1980s. 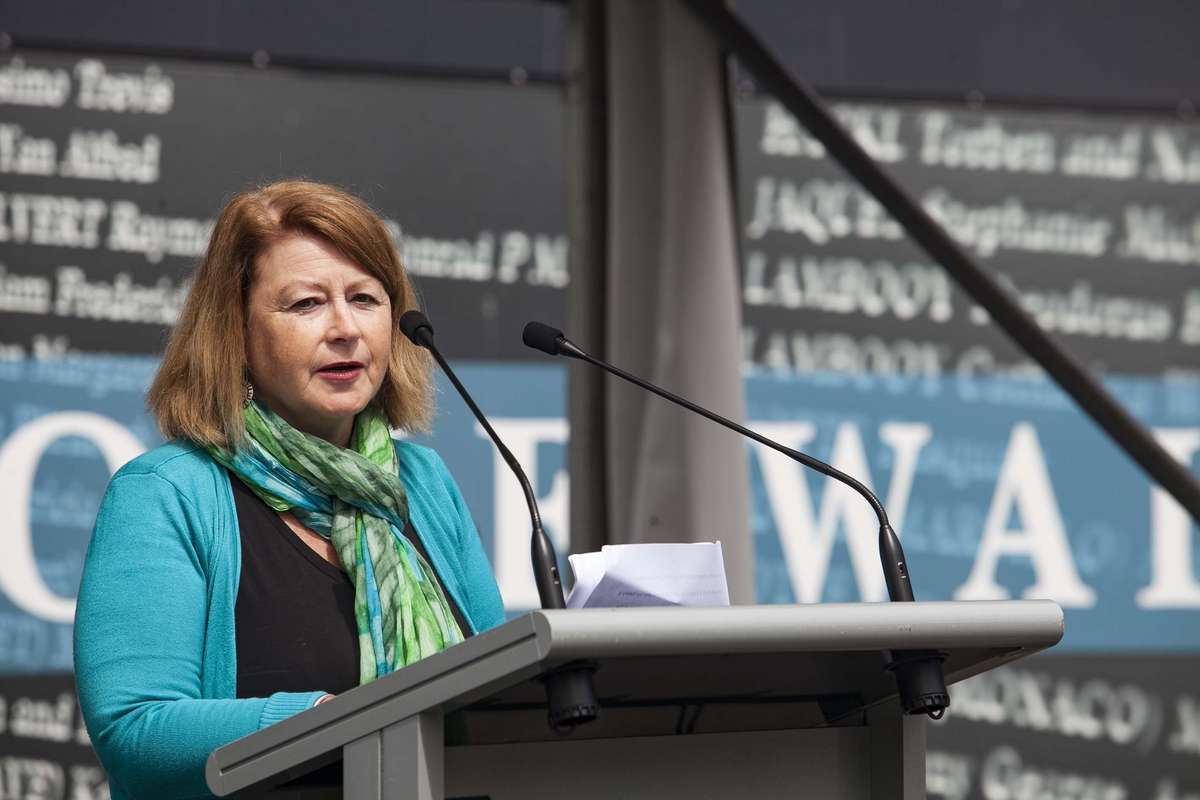 Ilse Fait: The story of Rudi and Adele

In some ways my parents, Rudi and Adele, is a story typical of many post-war migrants. They met, fell in love, sought a fresh start in Australia, with Dad leaving first to pave the way.

Although Mum & Dad grew up in Serbia they were actually Donau Schwaben – an ethnic group who maintained their German language, culture and traditions. It was because of this heritage that after the war Danau Schwaben, including my parents and their families were dispossessed, rounded up and forced into internment camps where many later died. Mum lost both her parents and Dad lost his only remaining parent. 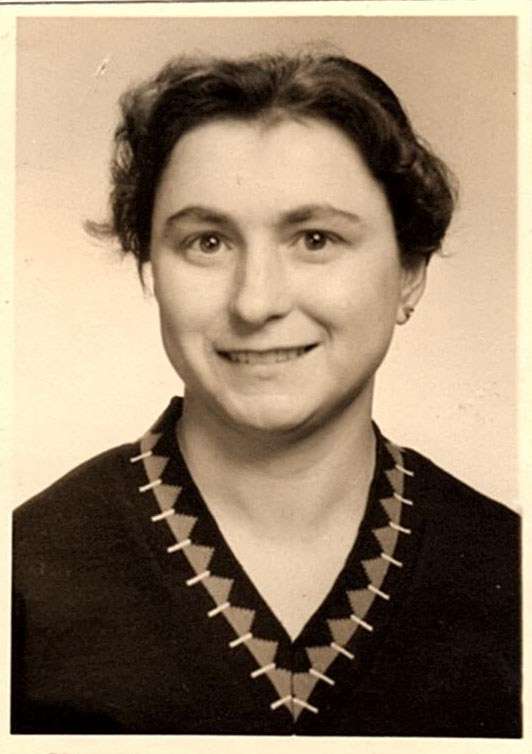 Adele in 1957, just before leaving for Australia. Image: Ilse Fait. 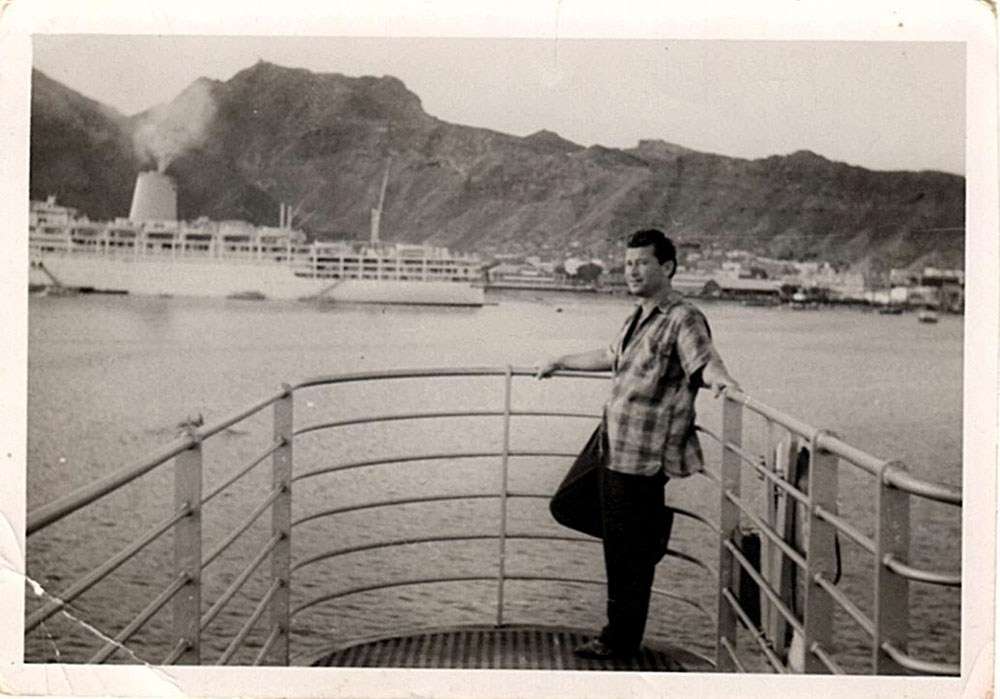 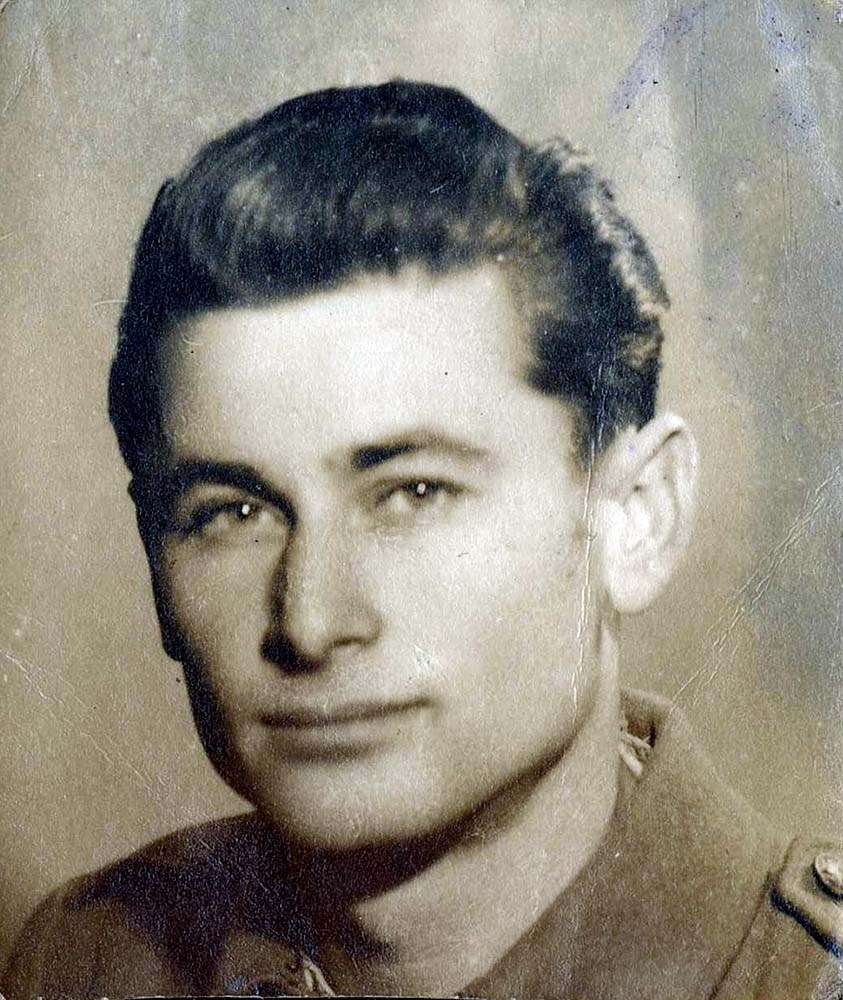 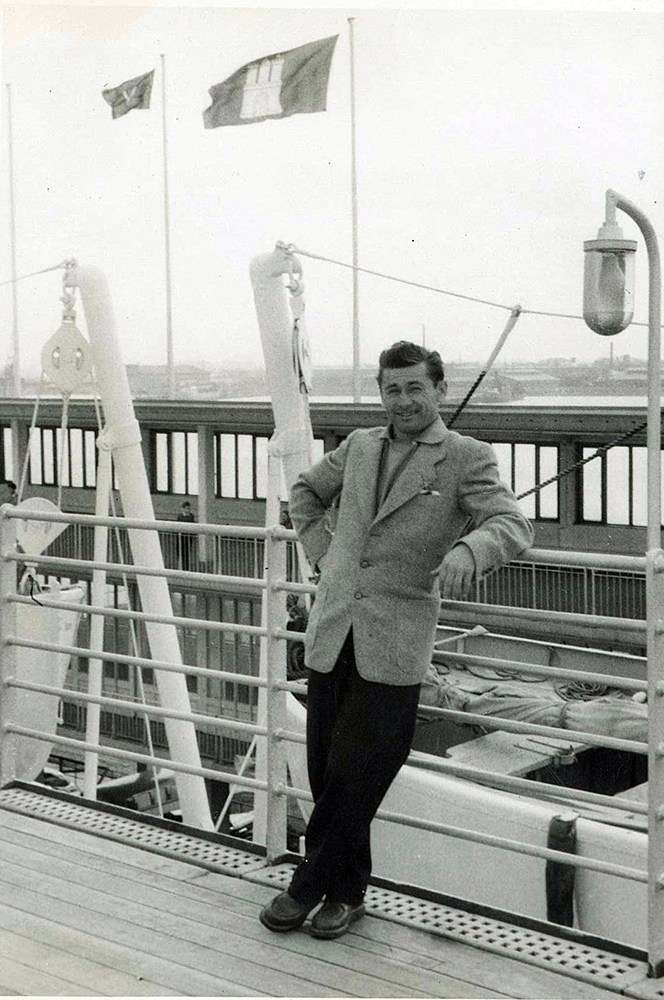 Escaping communist persecution and unaware that some members of their families had been in the same camp, Rudi and Adele finally met in Germany after gaining asylum. Hoping for a better future far away from post-war Europe, Dad decided to emigrate to Australia. Sailing on the Fairsea he arrived in Melbourne in June 1956 before eventually heading to Sydney after spending some time at the Bonegilla migrant camp on the NSW/Victorian border. But before he left he asked Mum to follow him to Australia.

Leaving her remaining family, friends and everything familiar for a new country half way round the world she didn’t know a lot about would have been a really difficult  decision for her to make. But she decided to follow her heart, how could she resist such a handsome fellow?

Dad’s voyage was uneventful, but Mum could never have imagined boarding the MS Skaubryn in Bremerhaven in March 1958 she would have to endure far more than seasickness or that it would take four ships to get her to Australia. 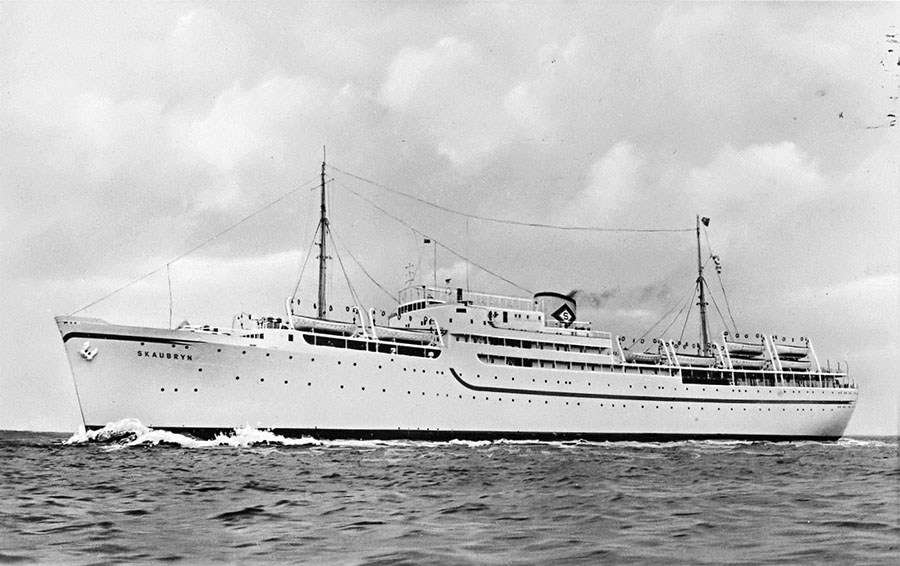 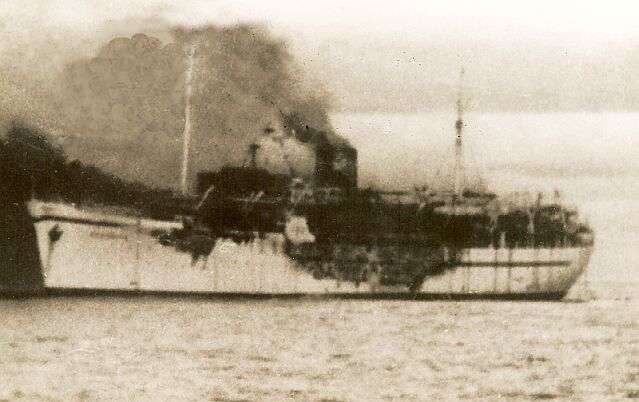 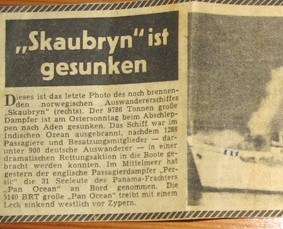 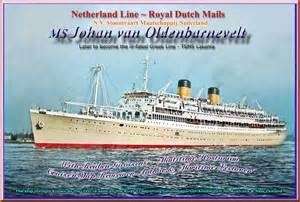 It was smooth sailing until the 31st of March, when shortly after leaving the Red Sea, the ships alarms sounded at 11.30 pm. A fire had broken out and was moving rapidly through the ship. Everyone was told to evacuate, Mum having just enough time to grab her handbag which held her passport before getting into the lifeboat. The Skaubryn continued to burn, broke in two and sank but amazingly, only one person died after suffering a heart attack aboard one of the lifeboats.

But it wasn’t until the next morning that the first ship on the scene, a tanker called the City of Sydney picked them up. Unable to cope with about 1300 survivors, they were transferred to an Italian cruise liner the MV Roma and arrived in Port of Aden on Good Friday, 4th April. There they were given some basic necessities and housed in a newly finished hospital until they could resume their voyage.  For many, including Mum this was aboard the MS Johan Van Oldenbarneveldt. 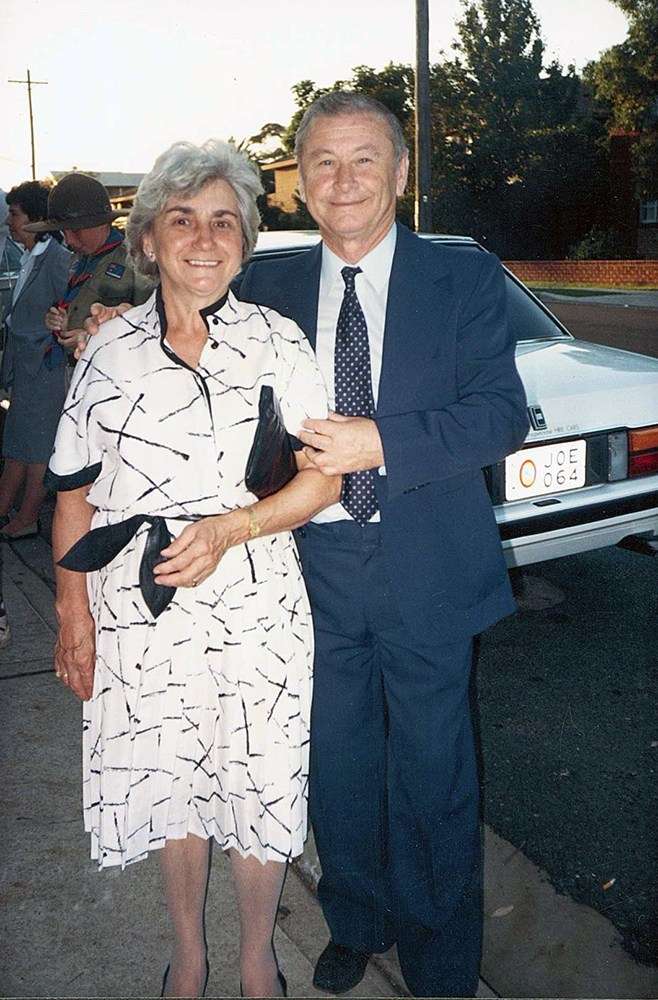 I can’t imagine just how terrifying it would have been for her, adrift in a small lifeboat in the middle of the night, especially after all the things she endured in the aftermath of the war.

Thankfully there were no further dramas. Mum finally arrived in Melbourne on the 4th of May and made her way to Sydney. She married Dad soon afterwards. They raised my brother and me, working hard to try and give us the opportunities that they never had. 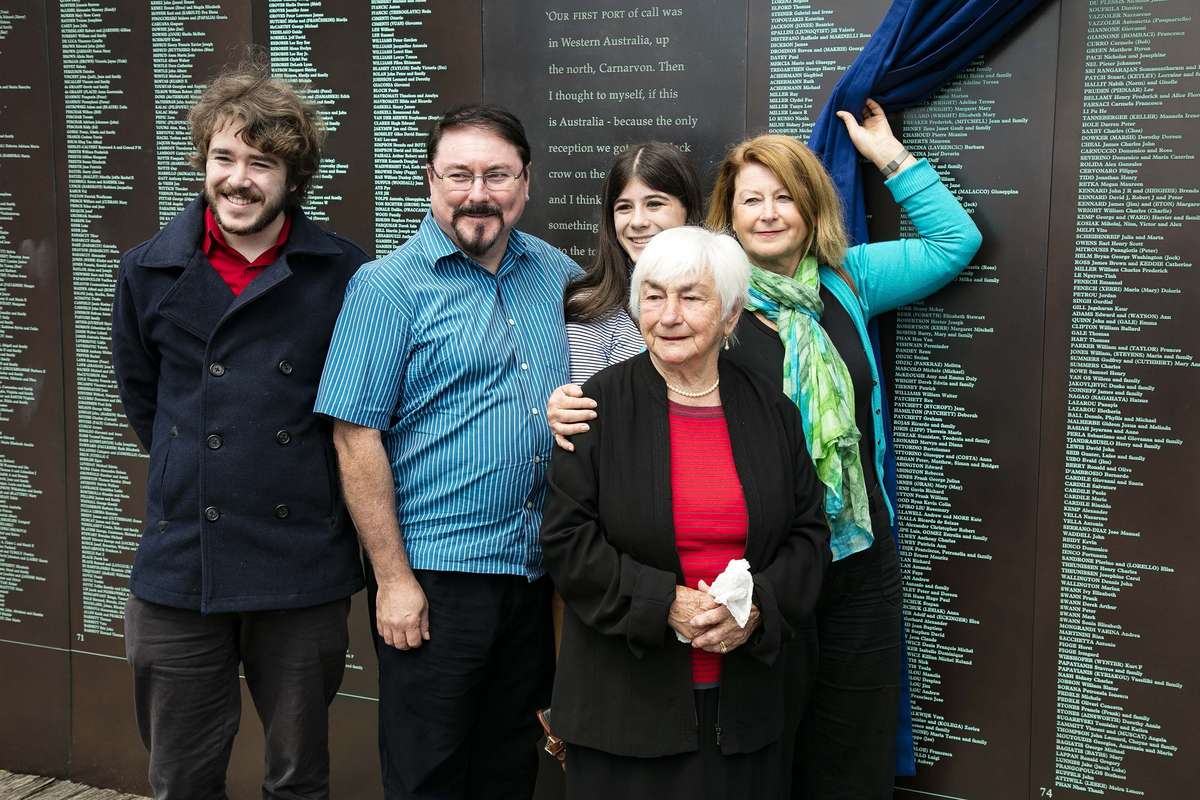 They may just be ordinary people, but by having the courage to leave everything behind and forge a new life in Australia they, like other migrants, played a role in making Australia the country it is today. Honouring their names on the welcome wall is a tangible acknowledgement of their contribution, not only for our family but for future generations. 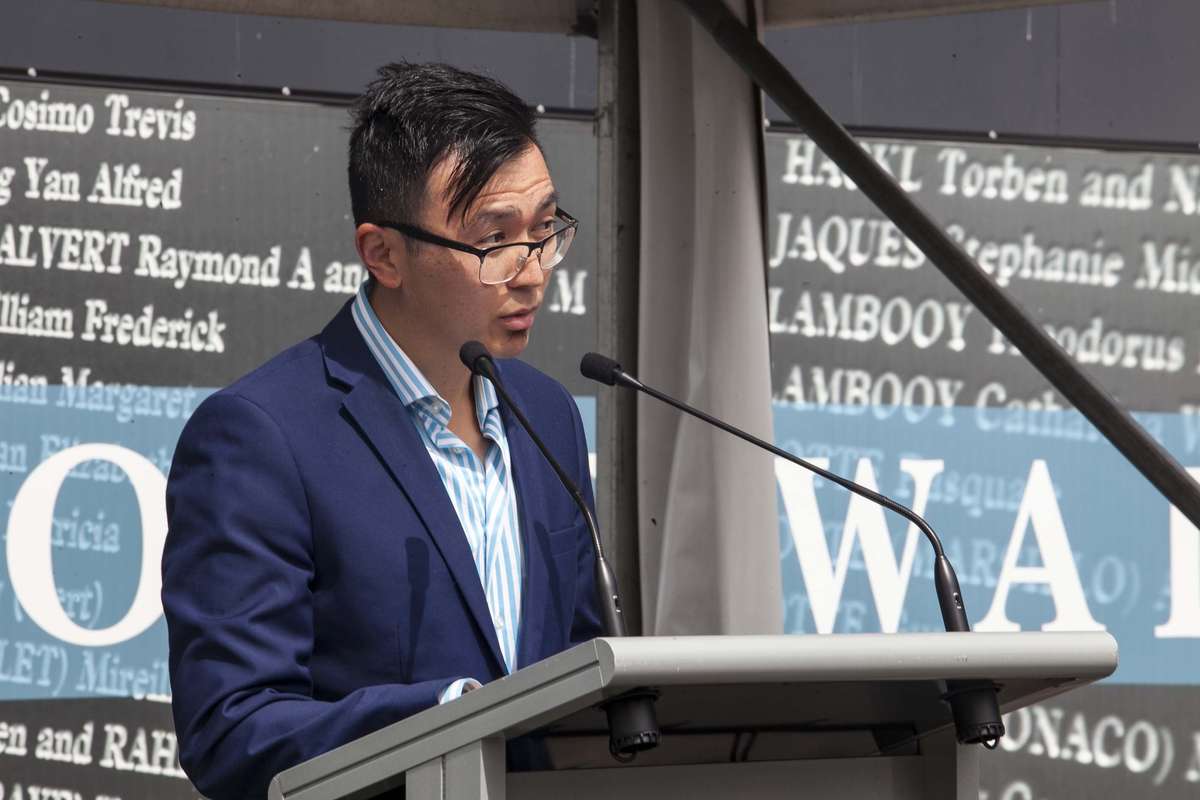 My father, Guo Rang Hu, arrived in Australia from China in 1987 via the World Health Organisation to be a medical research fellow at Concord Hospital. Having dual-trained in Western and Traditional Chinese Medicine at the Shanghai Medical University, he specialised in immunology.

He went on to attain a Ph.D. in Medicine at the University of Sydney, and a successful career in medical research – starting out looking for a cause for Alzheimer’s disease, and then moving to allergies. Drawing upon his dual medical training, he made significant progress conducting clinical trials and combining the benefits of Traditional Chinese Medicine with the rigors of conventional medical research. For close to 30 years, and until very recently, Guorang also ran a long-standing practice in Traditional Chinese Medicine, serving his local community of Fairfield in Western Sydney.

My mother, Taihang Fan, and I followed my father shortly after he arrived, emigrating from China in 1988. I was 6 at the time. My mother was a paediatric nurse in China, and coming to Australia with limited English, started out in a clothing sweatshop, before teaching herself English and began working at a local nursing home, from where she continued on the rest of her career in elderly care nursing.

Being new migrants, we started out renting a converted garage as our home, in the suburb of Fairfield. There was a Foodland within walking distance and a local primary school. It wasn’t until a few years later that we bought our first car. Our first house followed a few years after that. My parents did not seek to become Anglo-Australians, but rather found their special place within the country, as Chinese-Australians: culturally diverse, and keen to integrate, but not be segregated. They found their place working tirelessly to contribute to society and make it better. And without fail we will have a BBQ every Christmas in their back yard.

I’m a little hesitant to use the phrase ‘a migrant experience’ to describe the journey my parents made, as it implies a singularity about the experience shared by them and each of the families represented here.  Being at the museum, it would seem apt to reflect the significance of today and the inscription of their names upon this wall, with the five values of the Royal Australian Navy. And I dare say these may well be virtues shared by many of you, in the journeys you and your families have made to be here. 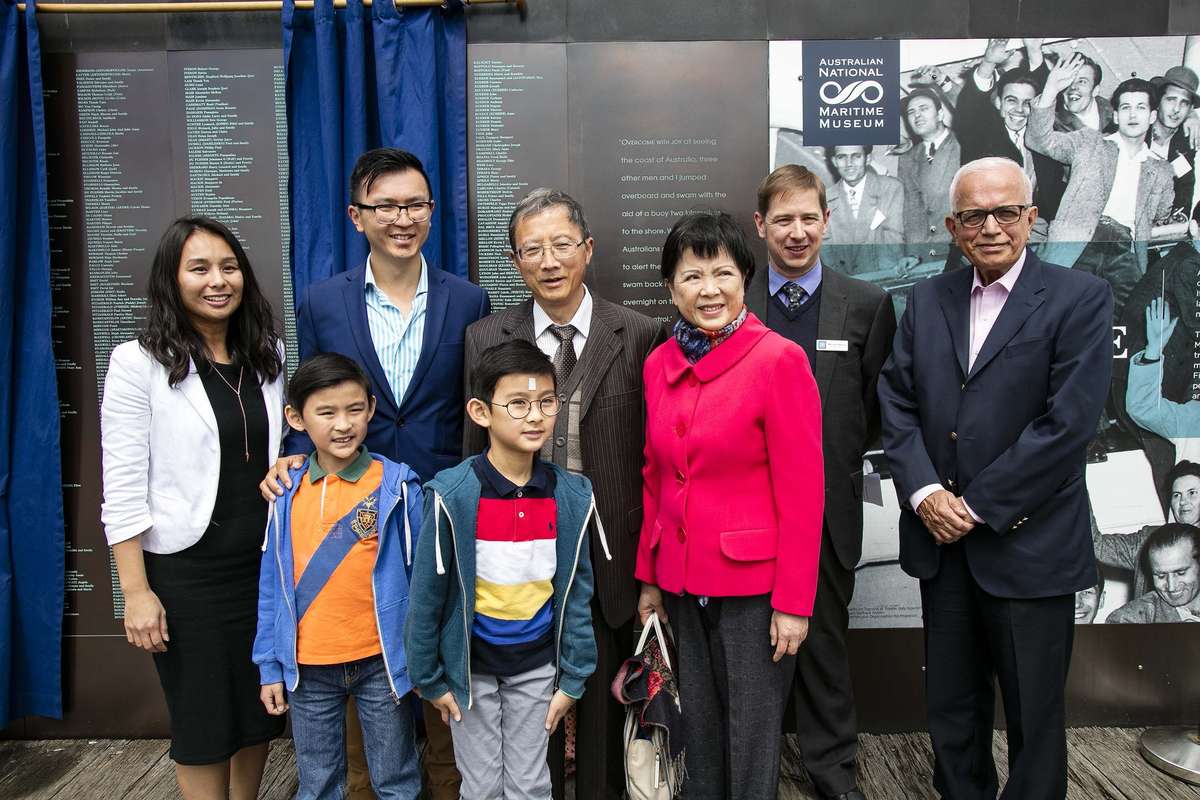 The strength of character in the face of personal adversity. The courage to leave their homeland, their family, and all that was known to them and make the move to a distant land. Nonetheless, we count ourselves lucky, to have made this trip as migrants, and not refugees, escaping war and persecution. One finds it hard to begin imagining the horror of that journey.

The virtues of hard work, honesty, and fairness that gains trust and respect. Virtues by which my parents lived their life, as hard-working members of society, to create a better life for me, and for those around us.

The commitment to the service of Australia, which through the lifelong work of my parents, represent a genuine desire to serve the community and better Australia.

Which is to be truthful and do what is right for each other. A noble virtue that my parents share with many migrants, and a belief in something as simple as an honest day’s work.

Honour is the key to why I’m standing here today, and I hope you share this sentiment with me.
It is an opportunity to honour my parents and their contributions, by having their place in Australia recognised. It is also an opportunity to note what an honour it is to have been accepted into this great country and to have become Australians. Being able to stand here and honour my Dad is all the more significant today, one because he has just turned a youthful 70 – happy birthday Dad! But more so because he suffered a major stroke quite recently that almost meant he couldn’t make it to see the ceremony today. Thankfully, he is making a remarkable recovery. 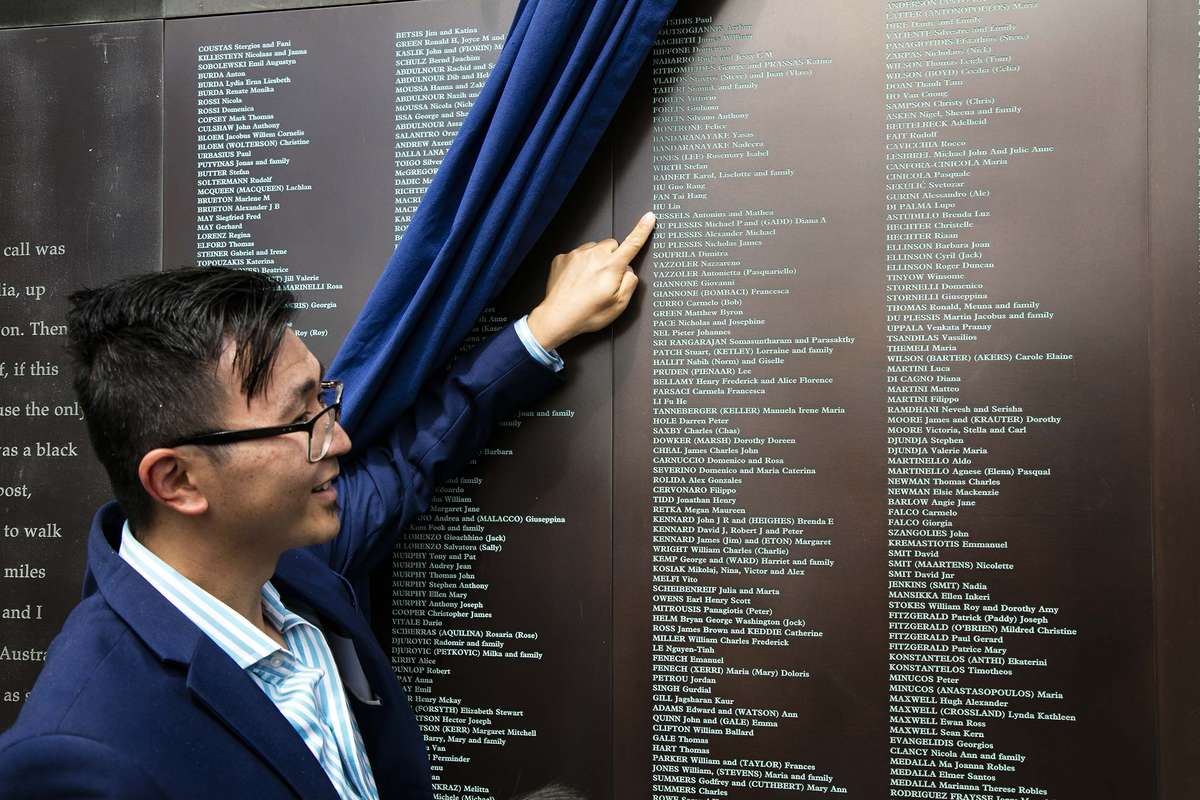 I decided to put my parent’s name up on this wall because I am proud of what they have achieved as migrants, proud of the courage and sacrifices they have made, and proud for this to serve as a testament to their contribution and place in Australian society.

This wall is a fantastic record of who we are, where we came from, and how we got here. But more than that, each entry is a segue to a family and the very many stories that come with it.