The Talmet family from Tallinn

In September 1944, on the eve of the Soviet invasion of Nazi-occupied Estonia, Dagy Talmet (1915–1986) fled her hometown of Tallinn with a small suitcase in one hand and her two-year-old daughter Maie in the other. Her husband Osvald Talmet (1912–2004) was a pilot in the Estonian Air Force (then part of the German military forces), which had withdrawn to Germany ahead of the Soviet advance. Osvald knew that if his wife and daughter remained in Estonia, they would likely be deported to a forced labour camp in Siberia. He arranged for them to be evacuated from Tallinn on the German hospital ship Moero. 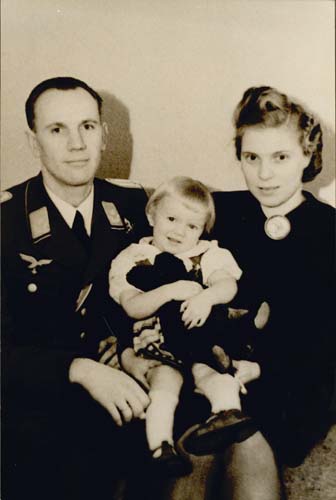 As Dagy did not want to leave on her own, she convinced her sister Olga to go with her. Olga was very practical and packed food and warm clothing for their escape. By the time they reached Tallinn harbour the hospital ship was already full, carrying more than 1,000 wounded soldiers and civilians. They boarded a smaller ship, Lapland, which formed part of a convoy that made a timely departure from Tallinn on the night of 21 September 1944. The next day the Soviets marched into the capital, re-occupying Estonia for nearly half a century (Estonia achieved full independence from the Soviet Union in 1991). 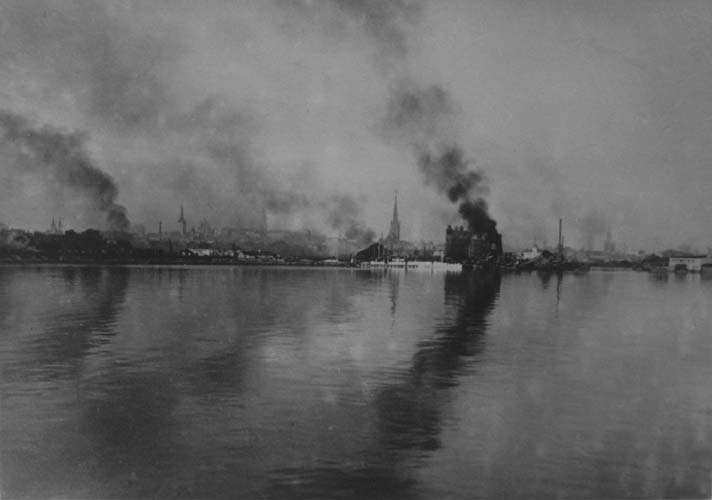 During the night Lapland sailed south through the Baltic Sea and in the morning Dagy heard planes flying overhead. She had been accustomed to the sound as Osvald always flew over their home in Tallinn to let her know that he had returned from each mission. As she went below deck, a number of Soviet planes dropped bombs on their convoy. Lapland managed to pull out of the way but Moero was hit and sank, drowning more than 600 people – the majority of whom were Estonian refugees.

Dagy and Maie made their way across Germany, at times just 20 or 30 kilometers ahead of the front line.

Lapland arrived safely into the German port city of Danzig (now Gdańsk, Poland) and as Dagy had papers to identify herself as the wife of an Air Force officer, she and Maie were permitted to travel on troop trains. With five other Air Force wives and their children, Dagy and Maie made their way across Germany, at times just 20 or 30 kilometres ahead of the front line. Where the railway tracks had been bombed out, they left the train and walked until they found another railway line, which would eventually take them into Bavaria in south-east Germany. They arrived late at night to a railway hotel, and the next morning, Dagy opened the curtains to reveal a panorama of the Bavarian Alps. It was the most beautiful sight she had seen in a long time.

Dagy and Maie remained in Bavaria until the end of World War II, when they were put into a Displaced Persons camp in Augsburg, and then Wielandshag, in the American zone of Allied-occupied Germany. Osvald, meanwhile, who had been taken as a prisoner-of-war, had no identification papers and no way of knowing where his wife and daughter were. Dagy eventually managed to locate Osvald with the assistance of the Red Cross and the family was reunited at Wielandshag. 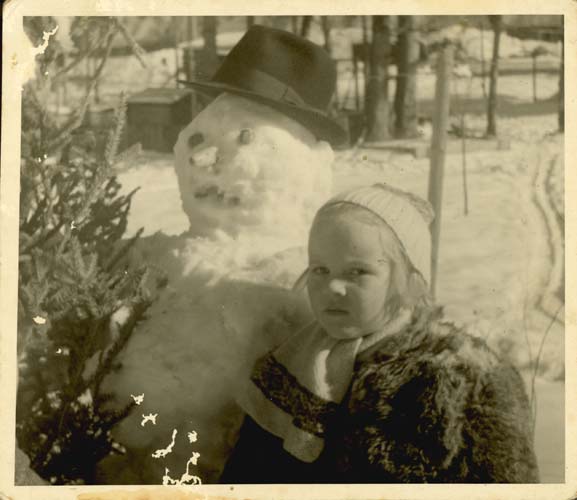 Like many others in the DP camp, the Talmet family had hoped that when the war was over, the Soviets would withdraw from Estonia and they could return home. By 1946, however, they had come to the realisation that this was unlikely and they aimed to get as far from Europe, and Soviet influence, as possible.

Osvald made applications to emigrate to America, Canada or Australia. The American government didn’t favour applicants who had been in the German forces, while the Canadian government wanted young, single migrants. The Australian government was receptive to family groups and the ‘beautiful Balts’, with their blonde hair and blue eyes, were considered ideal immigrants who would blend in and help boost Australia’s post-war population and workforce.

Osvald migrated to Australia first, travelling under a sponsored scheme that required him to work for the Australian government for two years in exchange for an assisted passage. He departed from Bremerhaven, Germany, on SS Svalbard and arrived in Sydney in October 1948. Osvald was sent to the Bonegilla Migrant Reception and Training Centre near Wodonga, Victoria, and was given the choice of three assignments, the first of which was digging trenches for the new sewerage system in Adelaide. Fearing that the second and third assignments could be worse, Osvald chose to go to Adelaide.

Dagy and Maie migrated the following year, having been placed in an Italian transit camp at Bagnoli, near Naples, before embarking for Adelaide on SS Oxfordshire. For Maie, now seven years old, the voyage through the Suez was a great adventure. Dagy bought a bunch of small bananas from Arab traders in the Red Sea and placed her share of 200 bananas under her bunk. Maie, who had never seen a banana in her entire life, could not resist this sweet temptation. By the end of her mother’s two-hour English class, Maie had eaten all but one of the little bananas! She was rushed off to the ship’s hospital and given a large dose of castor oil. 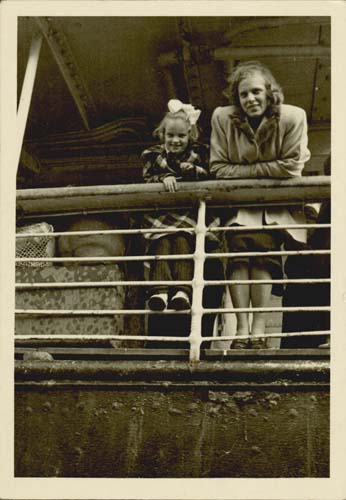 Maie and Dagy Talmet on the deck of Oxfordshire in Adelaide, 1949. Reproduced courtesy Maie Barrow. 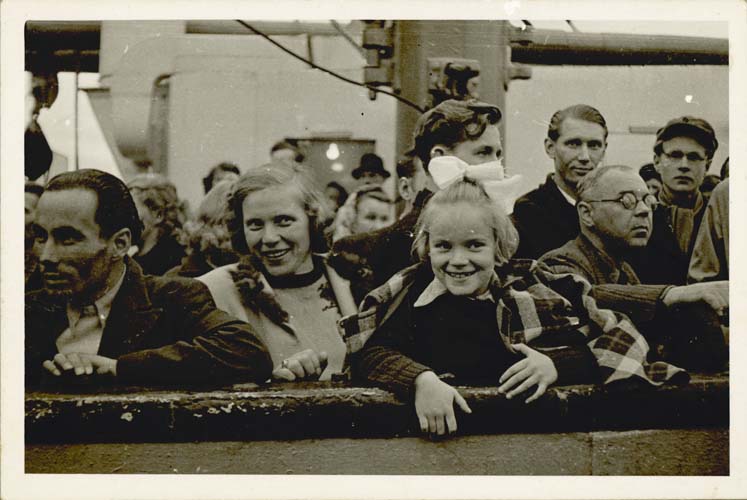 Dagy and Maie arrived at Outer Harbor, Adelaide, in May 1949 and Osvald was there to welcome them, presenting a little doll to Maie across the deck of the ship. The family boarded a train for the Adelaide Hills and as they passed through Largs North in Adelaide’s north-west, Osvald waved at a bare sand hill and exclaimed to his wife, ‘I’ve just bought that block of land for our house!’ When Dagy saw how isolated it was, she burst into tears.

Osvald waved at a bare sand hill and exclaimed to his wife, "I've just brought that block of land for our house!".

In Adelaide Osvald lived in a tent in a work camp while Dagy and Maie spent several weeks at the Woodside Hostel. Before long the family moved to Cheltenham, where they rented two rooms from the local postman. Maie started school at Woodville Primary in June 1949, not knowing any English, apart from the words to the song ‘Kookaburra sits in the old gum tree’, which she had been taught on board Oxfordshire. By the end of the year she had come top of her class, having learnt English through total immersion at school. 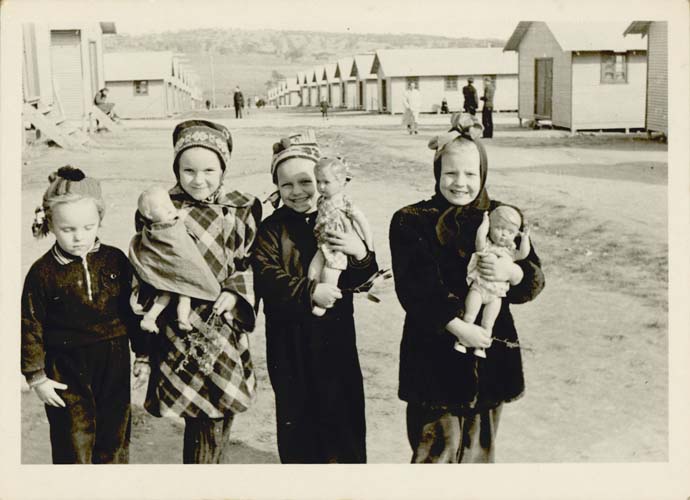 Maie Talmet (second from left) at Woodside Hostel with the doll her father gave her on arrival in Adelaide, 1949. Reproduced courtesy Maie Barrow.

In 1951 the Talmet family moved into their new house at Largs North, which was built with the help of other Estonian migrants. Osvald, who had completed his compulsory work for the government, found a job at General Motors Holden, while Dagy, who had been a weaver in Estonia, worked at ACTIL (Australian Cotton Textile Industries Limited) in Woodville. Osvald and Dagy, like so many migrants, were prepared to labour in the factories and sacrifice their lifestyles to ensure Maie and her younger brother Erik (born in Adelaide in 1958) could receive a better education. 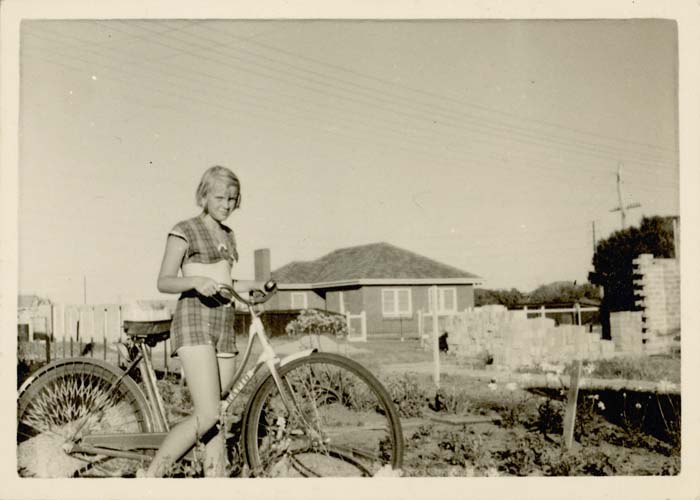 Maie studied chemistry at the University of Adelaide, where she met her future husband Kevin Barrow. In 1966 the couple moved to London and Maie worked as a research assistant to leading Australian chemist Sir Ronald Nyholm at University College London. They returned to Australia in 1973 and settled in Sydney. Following the birth of her two daughters, Anni and Kristi, Maie returned to work as a research assistant at the University of New South Wales (UNSW). She completed a Masters degree in chemistry, studying fungal metabolites, and later worked in the Chancellery at UNSW, as executive assistant to the deputy principal.

In 1994 Maie was attending an Estonian function when she got a tap on the shoulder from community elder Raivo Kalamae, who offered her a voluntary position at the Estonian Archives in Australia in Surry Hills. Not knowing anything about the world of archives, she completed a Masters degree in information management at UNSW and was the archivist at Botany Bay City Council for 15 years. She has been the honorary archivist at the Estonian Archives for the past 20 years and enjoys preserving the heritage and culture of her homeland and introducing it to Australians. 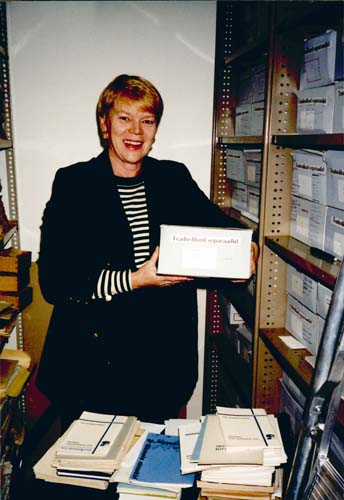 Reflecting on her family’s life in Australia, Maie remembers, ‘When my father got here he had to borrow two shillings from a friend so that he could write and tell us that he’d actually arrived. While he was working here, every so often in a letter would be a one pound note he’d managed to save and send to us. We really started from nothing. And that’s why my mother got a job as fast as she could. I don’t think they would complain, I think they would say they had quite a good life here. But it was hard work and it was a hard life to start with.’