In late July swimmers and paddlers (including my son) exercising at Balmoral Beach in Sydney Harbour found themselves sharing their early Saturday morning with a 14 metre long southern right whale (Eubaelena australis) only 50 metres from the shoreline and happily diving under them. The next day we watched from a distance in our kayaks as it spent hours in the deep-water trench just off nearby Chinaman’s Beach before heading west and into upper Middle Harbour, beyond the Spit Bridge.

The passage of these whales north to their breeding grounds is a major environmental turnaround. In the recent past they were hunted to the point of extinction because they were the right whale to catch – they yielded high quantities of oil and baleen (whalebone) and they remained afloat when harpooned. Now, teams of volunteers along with wildlife officers monitor their progress north to breeding grounds, then the return journey in spring. Their reports show the numbers have increased substantially over the years and they often come into bays and estuaries along the coastline.

Occasionally a whale will come into Sydney Harbour and in 2012 one gave birth, probably in the same area where this whale appeared recently. There are Aboriginal rock carvings around Sydney that feature whale outlines, and so it is likely that whales in Sydney Harbour were once seasonally quite common. Their return is a good sign, and something we now need to anticipate and accommodate.

Meanwhile, while the whale watching cruises off the heads have become popular, it’s now right on our doorstep. Last weekend the whale was quietly roaming the deep water extent of the upper reaches of Middle Harbour, providing a wonderful spectacle to the many lucky enough to live on the waterfront. By now it has worked out the pattern of the early morning rowers, the favourite locations where the fisherman congregate at high tide and the passages where the powerboats go from Roseville or Cammeray. It might have heard the sea lion who has also taken to the area for a while. It’s not a bad part of the harbour to go to – not too busy – and not so easy to get to that it can be swamped by public attention. 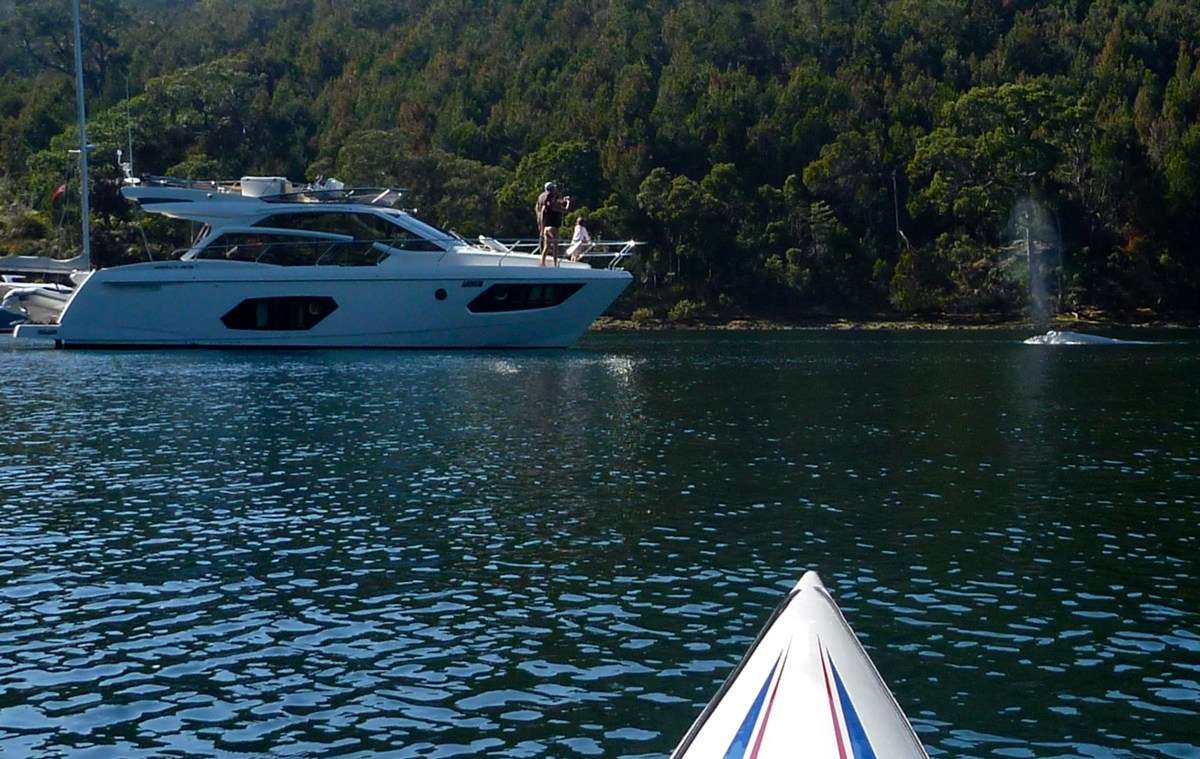 With my wife and two friends we launched our sea kayaks at the Spit early Sunday morning to see for ourselves. We hoped at best to catch a sight of it surfacing and spouting, and an hour later we came across the whale in Bantry Bay.
National Parks and Wildlife Service NSW were on hand in a runabout to manage things and NSW Water Police came by too, happy to see people interested. They indicated that we should not approach the whale within 100 metres, and if it came up near to us, we should stop and let it swim off. The handful of us there in kayaks and runabouts kept to the shoreline around the bay, and every now and then the whale surfaced and spouted for a minute or so. You could never be sure where in the bay it was going to come up, and often it was down for up to 10 minutes. On the shore a few walkers had come through the bush to see as well.

Chatting to the NPWS crew we learnt that it was a mature adult whale, but it was not known if it was male or female. Around the time it came in there had been an orca pod offshore, and they thought it may have come in to keep away from this pod. The natural growths called callosities on the front of its head that are common to these mammals were clear to see, and at times it showed enough of its length to remind you that, as gentle as it looked as it moved about, this was a very big animal.

After two hours of watching, helped by a coffee from the Cappuccino Boat who quietly appeared at the right time, we saw it spout once more then dive. We said thanks to the NPWS team and headed home along the eastern shoreline.

The whale had the same idea but did not let on. Ten minutes later and well clear of the bay the whale surfaced and spouted right beside the four of us!  So we stopped and watched it pass ahead before it dived, then it reappeared inshore of us, rolled over and drifted around on its back for a minute, before finally heading back down to deeper water. That evening it was back at Spit Bridge, perhaps waiting to head back out to sea. 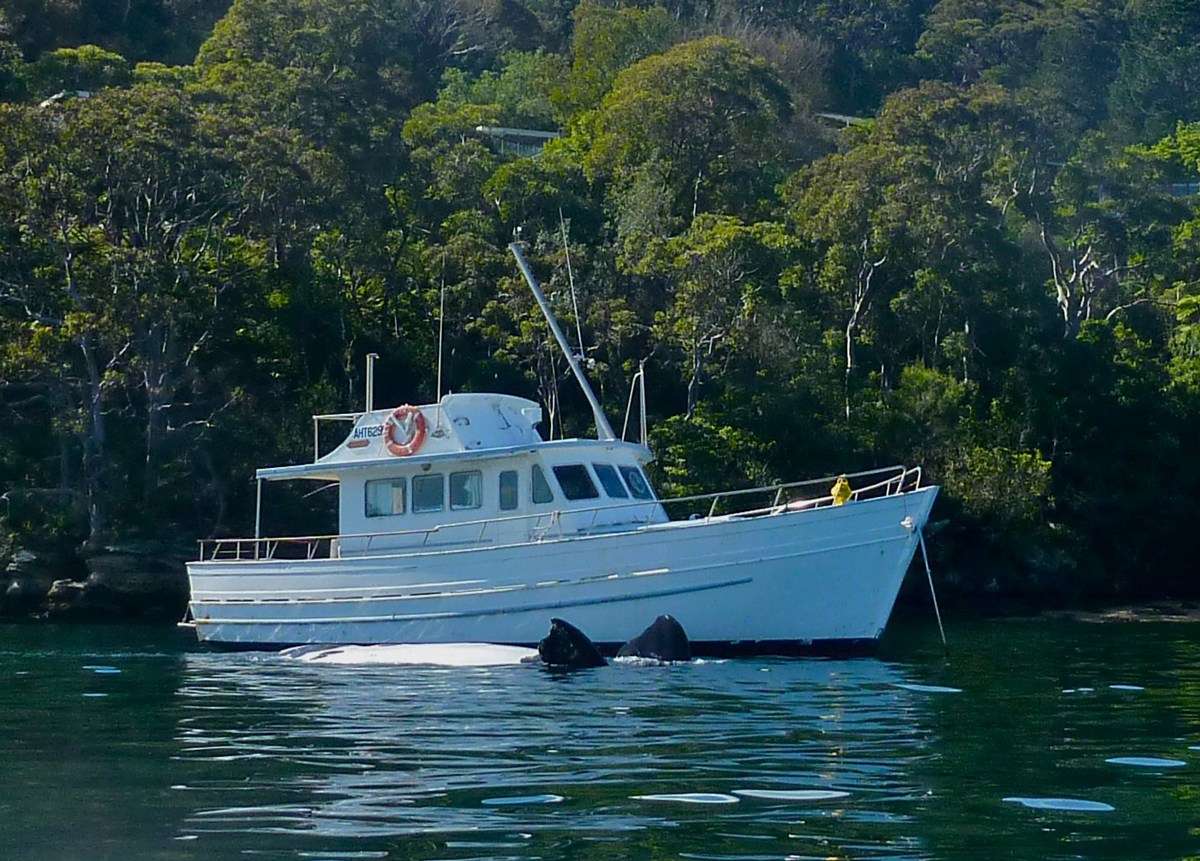 We certainly got our whale watching experience, a good few hour’s exercise, and just for the price of car parking.  As time passes it seems whales in the harbour will be more commonplace and even more accessible for people to view. On 12 August, a 10 metre long juvenile humpback whale (Megaptera novaeangliae) entered the harbour, coming as far as the Opera House where it was seen by many, before heading back out to sea. Perhaps we can expect more visits before summer, by which time they should all be back in Antarctic waters.

View all posts by David Payne→
Posted in: Arts and Culture