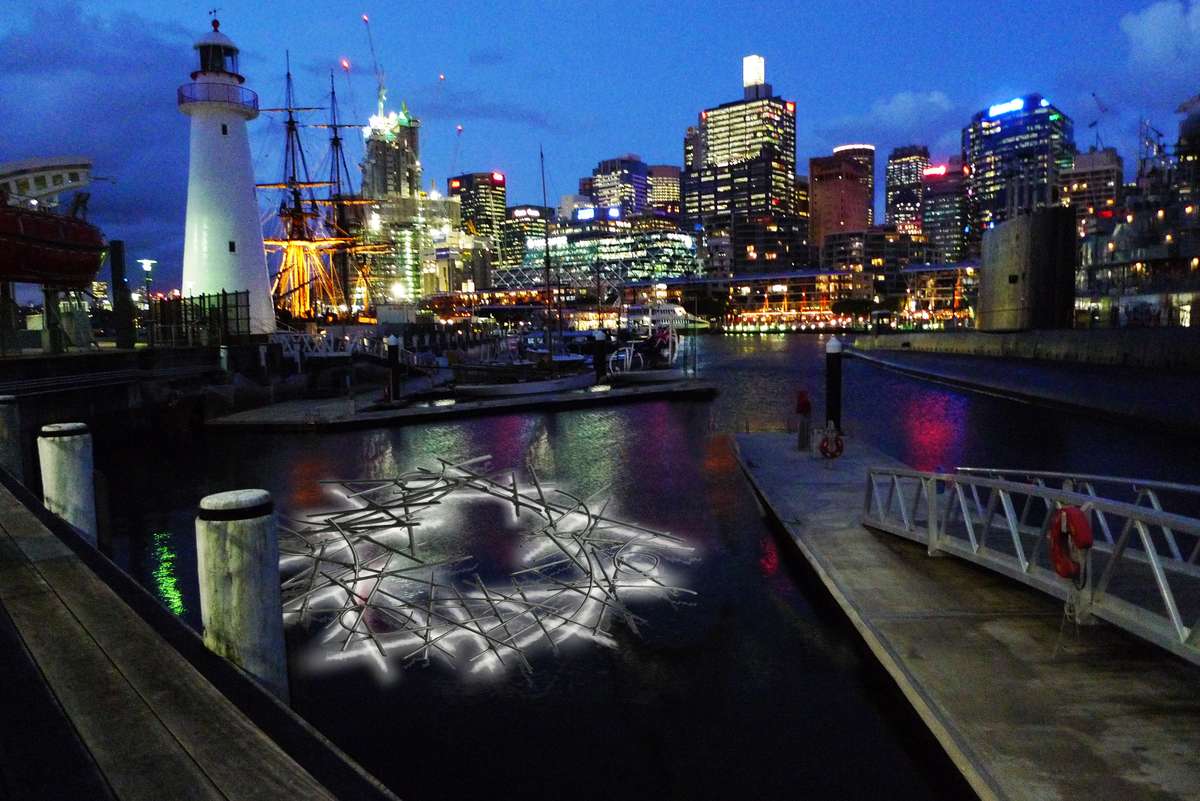 On 14 September 1914 the 55 metre submarine HMAS AE1 disappeared with all hands, 35 Australian and British sailors, while patrolling German waters off Duke of York Island in present day Papua New Guinea.

On 14 September this year, 101 years on, a major art installation will be unveiled at the Australian National Maritime Museum to commemorate the loss in a work entitled ‘…the ocean bed their tomb’. The work is currently under construction at the workshop of the artist Warren Langley where descendants of those officers and crew, submariners and naval historians gathered recently to view it.

Their stories of lost submariners and family loss reveals something of the human and emotional cost of the disappearance of Australia’s first submarine. This is an important part of the story the museum now aims to tell. 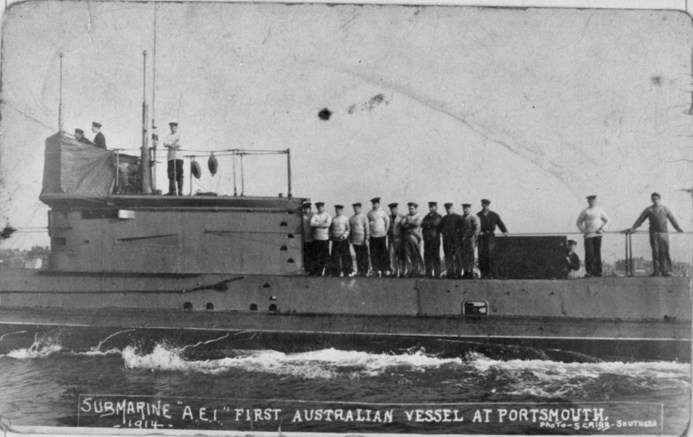 AE1 with crew on deck at Portsmouth

Under the command of Lieutenant Besant, AE1 had been on patrol with HMAS Parramatta in St George’s Channel east of Duke of York Island on 14 September 1914. Parramatta’s Captain Lieutenant Warren last saw the submarine at 3.20 that afternoon. That evening the destroyer returned to Simpson Harbour, Rabaul assuming AE1’s Captain Besant had already returned. The submarine was nowhere to be seen.

A three day search by HMA Ships Parramatta, Yarra, Encounter and Warrego and a number of smaller craft yielded no trace.

This unexplained loss so close to home and so early in the war, with its entire complement of 35 men, had a major impact on the public consciousness in a nation marshalling its eager volunteers.

Almost immediately the Australian media reported the disappearance, as communicated by Admiral Patey, Commander of Australian Fleet in charge of naval operations on 19 September, and following it, the pronouncements from the Minister for Defence and Prime Minister Andrew Fisher.

Newspapers across the country followed the loss intently and reported developments daily. With headlines such as ‘Australia loses her first ship of war’ (Sunday Times, 20 September) and ‘Naval disaster’ reporters chronicled the submarine’s technical attributes as ‘the last word in submarine construction’, the search, the specialist expertise of the lost officers and crew, a superior lot of men, stories of local men like artificer John Messenger from Ballarat and stoker John Bray of Eaglehawk, Victoria, the benefit concert for wives, mothers and family held 14 October, along with diplomatic messages of support and condolence.

They also reported the mystery and then excitement of theories about its fate. The news even reached Berlin, with the publication of German news report postulating that its ‘Pacific fleet has not been idle’.

The tragedy of the AE1 is the first loss that the Australian Navy has sustained, and the magnitude seems all the grimmer for the atmosphere of mystery which surrounds it … Whether she was actually sunk by a shot from the enemy, whether an unseen pinnacle of coral ripped open her plates, or the pumps refused to do their work in bringing the vessel again to the surface after a dive, will probably remain forever unknown …

But though Lieut Besant and his companions perished without the firing of a single shot, the fact that their death lacked the qualities of spectacular detracts not a whit from its nobility or its example. They obeyed their orders. And they died in that obedience. They gave their lives for King and for the Empire as surely and as unhesitatingly as though the AE1 had sunk, bows toward the enemy, rent and shattered from stem to stern beneath a crashing rain of shells.

The following weeks saw eulogistic poems on similar themes of heroism, national duty, sacrifice and nobility of spirit published and republished in city and regional newspapers, including WE Vincent’s The boys of AE1, Del McCay’s A.E.1, and Submarine AE1 by Anne Almer, a regular contributor to Adelaide’s The Register interested in the spirit and soul.

The brave men at their duty met their doom
Sudden and sharp the ocean bed their tomb.
No roar of battle warned them death was nigh;
Silent and sudden they plunged into gloom.
The Register, 23 September 1914

More than one hundred years later the submarine remains lost and the circumstances of its disappearance a mystery despite several attempts to locate it, including a sonar survey earlier this year. Commander Lieutenant Besant, his two officers and 32 Australian and British petty-officers, seamen, artificers and stokers remain lost at sea.

This unresolved mystery, amplified by a line from Almer’s poem inspired artist Warren Langley to conceive the commemorative work ‘…the ocean bed their tomb’ in a lyrical homage to the lost sailors.

The work takes the form of a large scale wreath, six metres in diameter. It will be located at the museum basin floating above the water, casting its shadow on its surface to its rhythms, day and night. 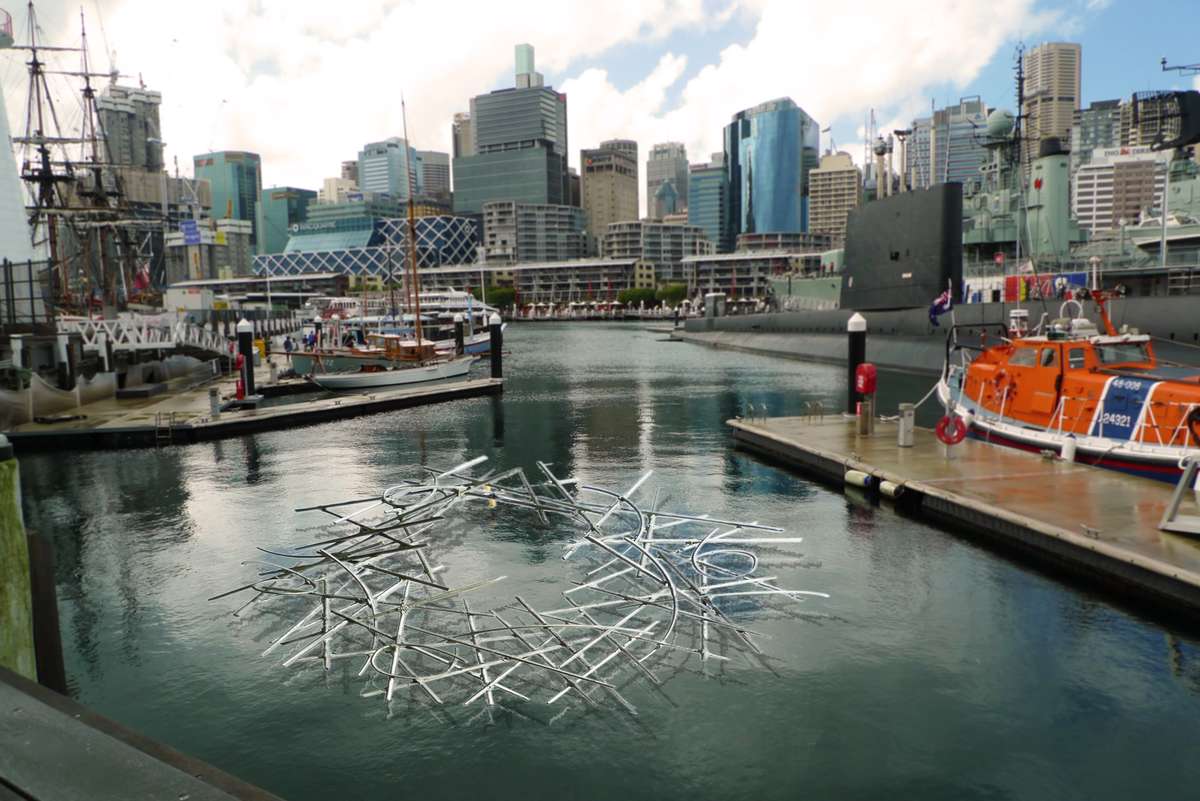 A burial at sea is not uncommonly accompanied by a floating wreath of flowers. In September 1914, in the early months of WW1 it is unlikely that the luxury of a floral wreath would have been available. The concept for this art work imagines an alternative, equally beautiful wreath constructed of floating twigs, branches and vegetative flotsam from the waters off Papua.

This is an art work about contemplation and reflection in both a literal and metaphorical sense.

In sunlight, the polished stainless steel structure shimmers and reflects its image upon the water surface. At night a concealed light source creates a complex optical intrigue of reflections.

In 1914 in London on 21 October, in Trafalgar Day commemorations, High Commissioner to the United Kingdom former Australian Prime Minister Sir George Reid placed a wreath at the Nelson Column ‘in memory of Australians lost in AE1 in the Pacific’ while the Navy League did the same for warships sunk in the North Sea.
In Australia this first major loss was soon overtaken by the carnage at Gallipoli and the Western front.

In 1928 The Returned Soldiers and Sailors Imperial League instituted a series of commemorations at Sydney’s cenotaph to mark key anniversaries of wartime losses. At the first, on 14 September, the bugler played The Last Post to commemorate the disappearance of AE1.

This year, 101 years after AE1’s disappearance, the poignancy of this work of art, especially the wreath as a locus for memory, service, sacrifice and loss for family and the AE1, naval and defence communities continues to keep the memory of these men alive. 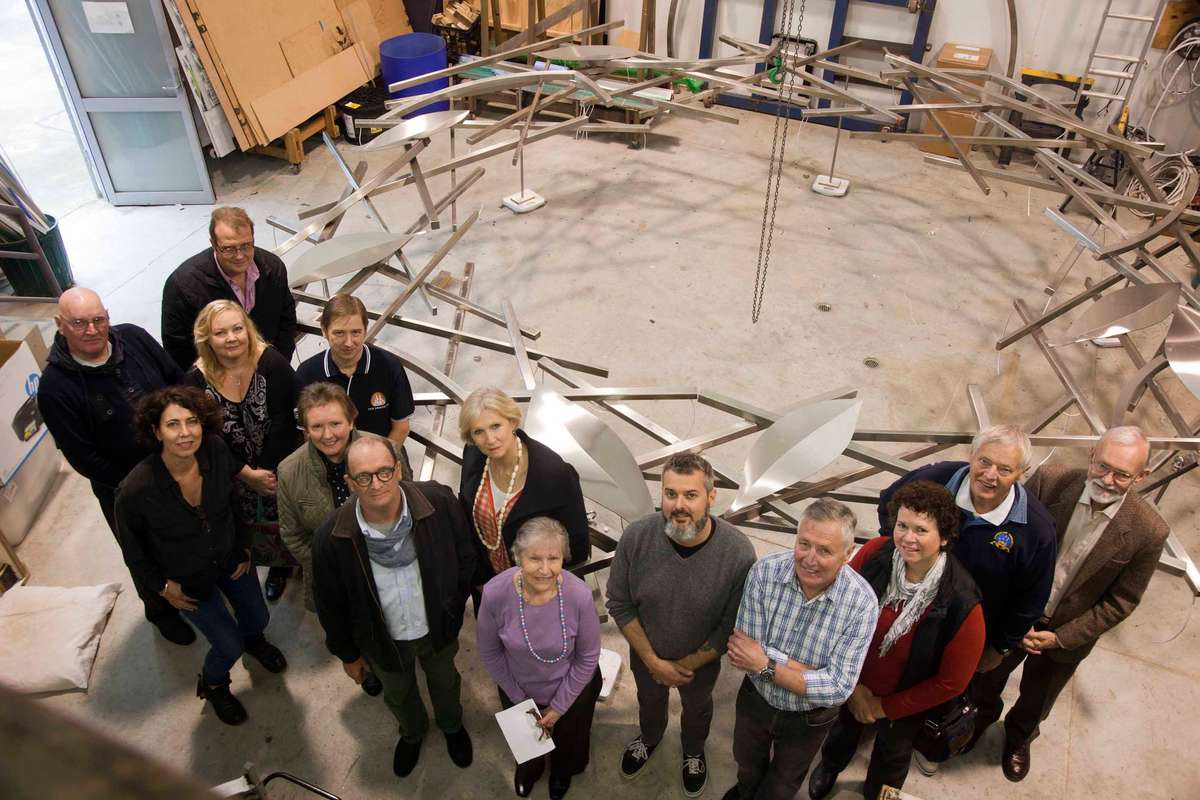 Vera Ryan, niece of Jack Messenger, gave a beautiful speech about the meaning of this work of art, ‘…the ocean bed their tomb’ to families of those who have lost sailors (see forthcoming blog about her uncle Jack Messenger lost with AE1). The museum hopes then that this beautiful homage to these lost men will become even more resonant in future years to prompt further conversations about the contribution of submariners and the RAN in Australia’s defence history. 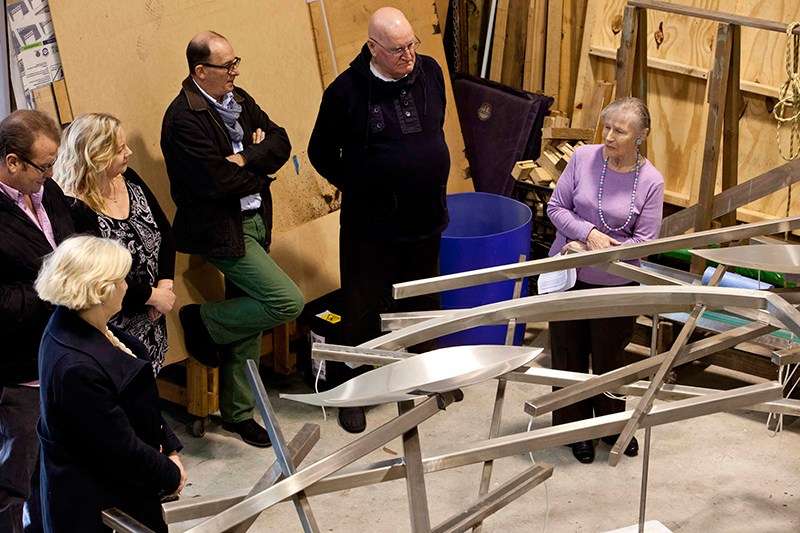 AE1 Stoker Jack Messenger’s descendant Vera Ryan speaks about the importance of the work of art and remembering AE1 to families and the broader Australian community. Photo: Andrew Frolows. Supported by a grant from the Federal Government’s Anzac Centenary Arts and Culture Fund. 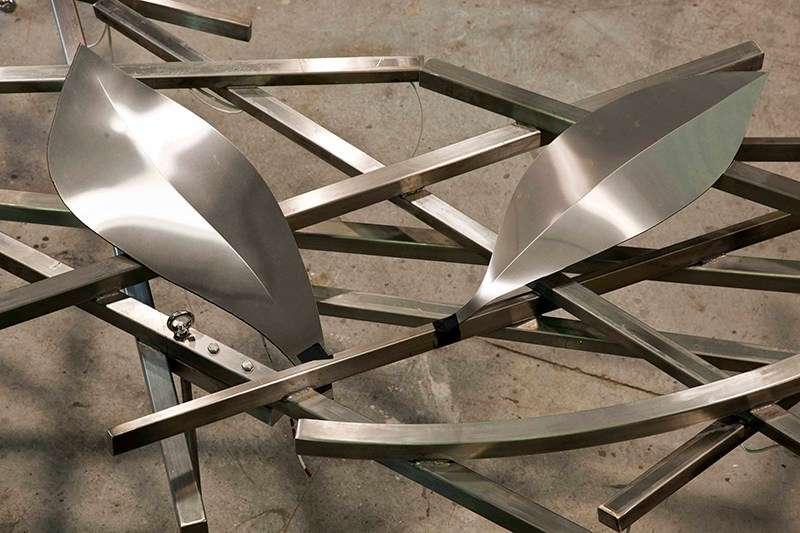 ‘…the ocean bed their tomb’ detail of laser cut mangrove leaf. Warren Langley researched vegetation from Papua New Guinea where the submarine was lost to adopt the motif of the mangrove to thread through the stainless steel wreath. Photo: Andrew Frolows. Supported by a grant from the Federal Government’s Anzac Centenary Arts and Culture Fund.

The development of the work is supported by a grant from the Federal Government’s Anzac Centenary Arts and Culture Fund.