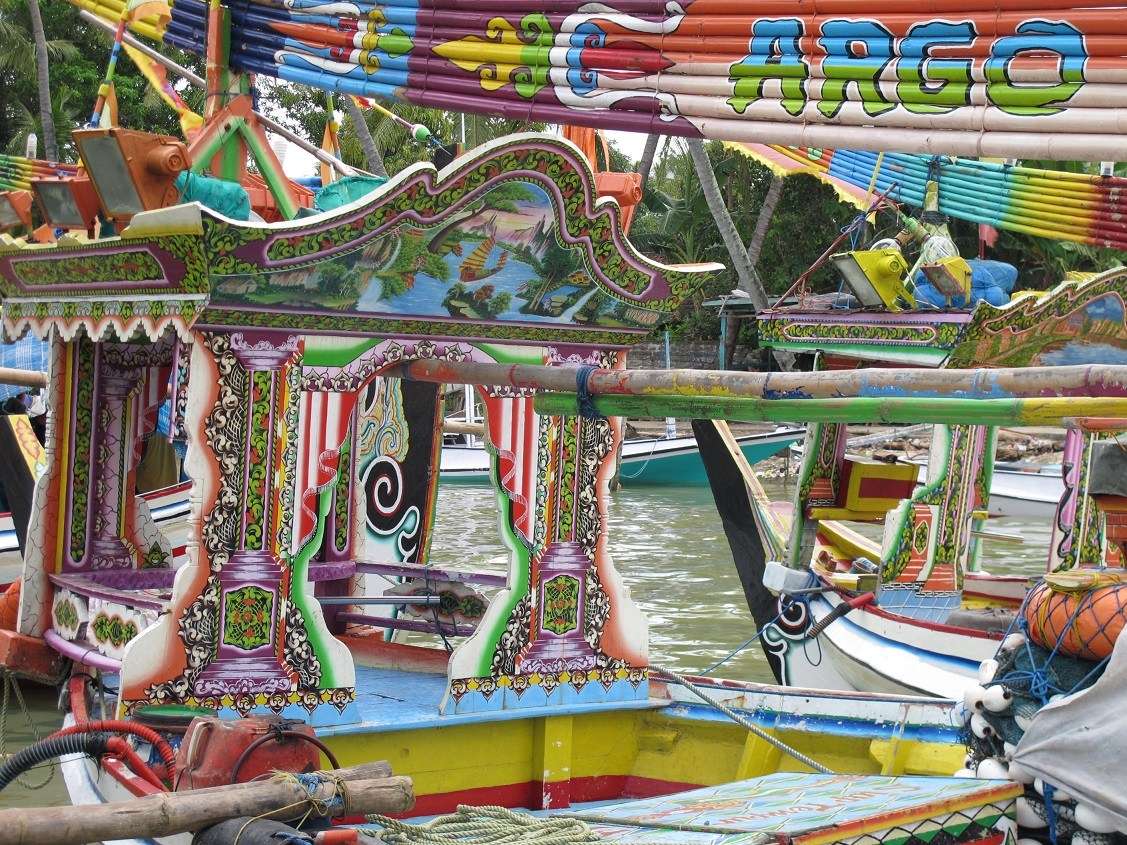 The brightest and most striking examples were observed on Madura, an island that lies just off north-east Java. A notable resurgence of the decorative arts was clearly under way there.

I went to Madura this year to find the shipwrights who had built the spectacular fleet of timber fishing boats in western Bali that featured in my recent article, Bali’s secret fleet – a glittering armada, in Australian National Maritime Museum’s quarterly journal Signals (No 110 March–May 2015, pp 24–31). These boats are ordered by Balinese entrepreneurs for a thriving purse-seine fishery, and are built to a traditional design by specialist artisans on the nearby island of Madura.

After they’re delivered to Bali, the boats – known as selerek – are richly decorated by their owners with carvings and sculptures, paintings, banners and bunting. The motifs that they use reflect the religious traditions of a mixed community of Hindu and Muslim fishermen who work together harmoniously in the west of Bali. But also depicted are pop stars and sporting idols. 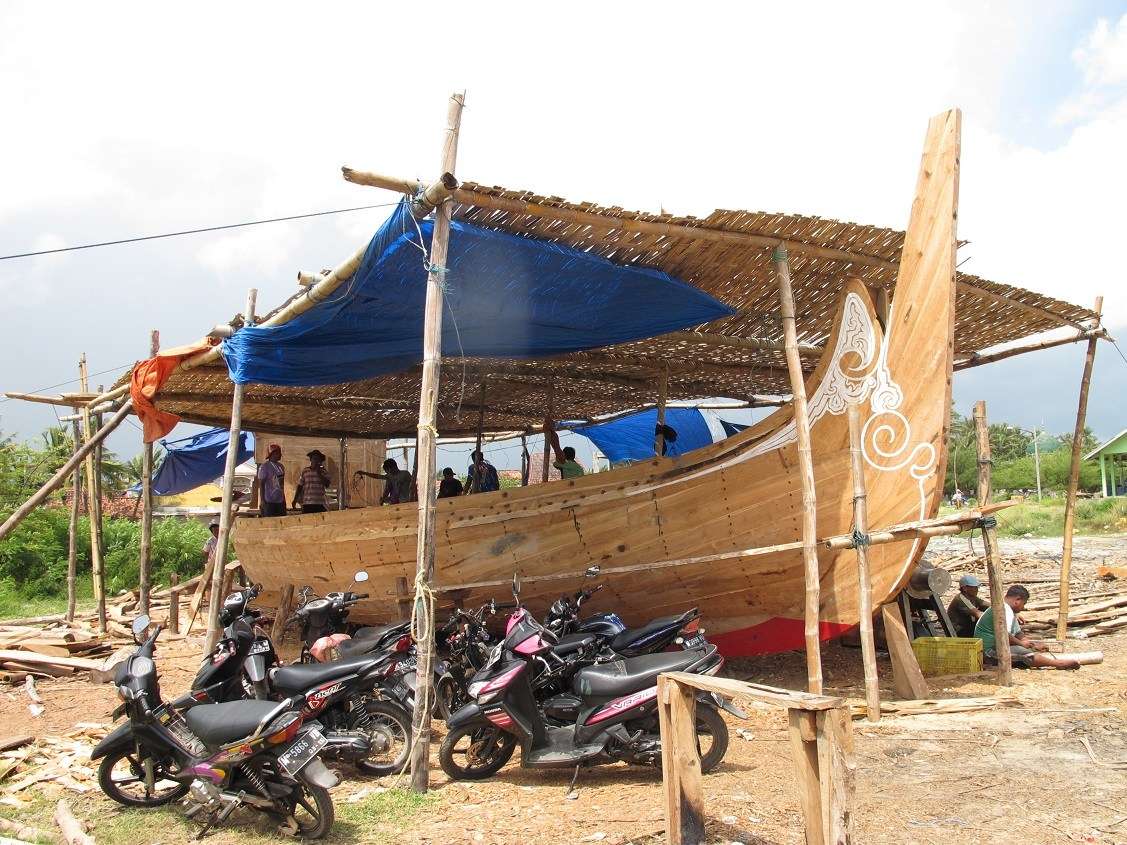 Over in Madura, I tracked down the remote sites where the selerek are built to order for the Balinese fishery, recording the work of their builders in isolated seaside hamlets and ‘shipyards’ that are often just tree-shaded patches of rocky or sandy shoreline. Then I set off around the rest of the Madurese coastline, to make a survey of boatbuilding communities that I hadn’t visited for 15 or more years.

Some of my earlier research in Madura was for the museum, when we were interested in communities that still sailed traditional, engineless boats to fish in Australian waters. At that time, in the 1980s and 90s, Madurese boatbuilding traditions were among the most fascinating, colourful and inventive in the world. Many districts produced their own, very distinctive type of vessel, including some of the world’s last sail-powered cargo vessels. It was always great fun to meet the builders and sailors, and go off sailing with them. 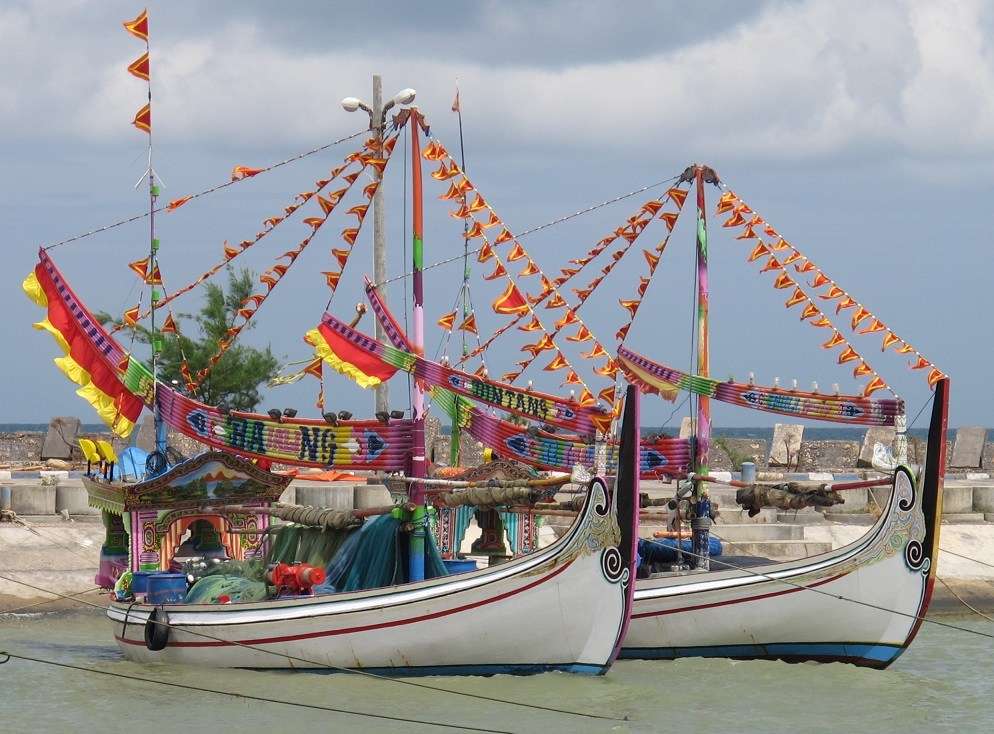 This year’s survey looked at the way those older traditions of Madurese boatbuilding had modernised. Large, engineless sailing vessels had entirely disappeared, although the newer, motorised replacements still use traditional timber construction with some identifiable, ‘signature’ stylistic features remaining to distinguish one area’s output from another.

Along the north coast of Madura every river flowing into the sea is the home port of a motorised fishing fleet built in the same distinctive, local style. Here too, as in western Bali, a booming fishery using big purse-seine nets has developed in recent years. These boats, though quite different in design, are also called selerek, referring to the profitable net-fishing technique. And, as in Bali, the resulting prosperity has been accompanied by an exuberant burst of decorative arts. 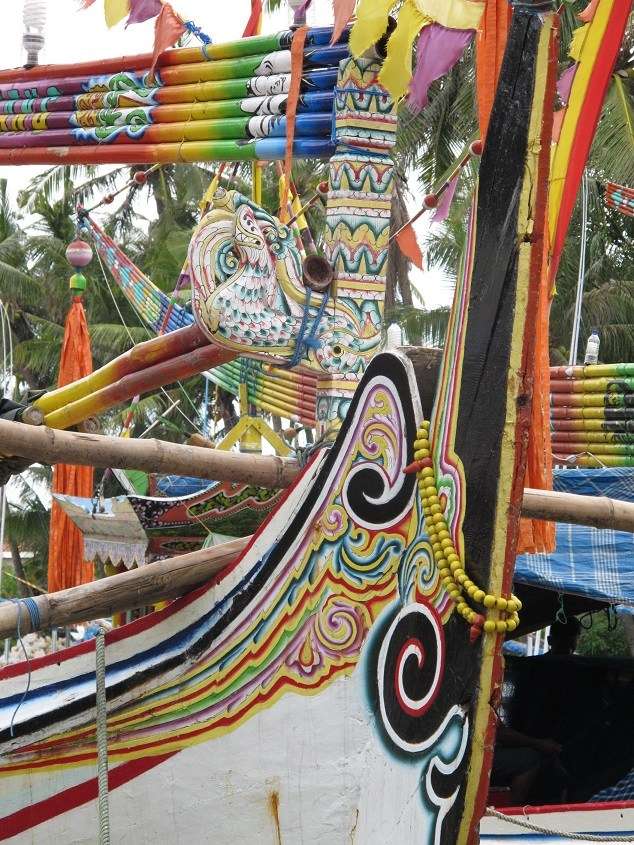 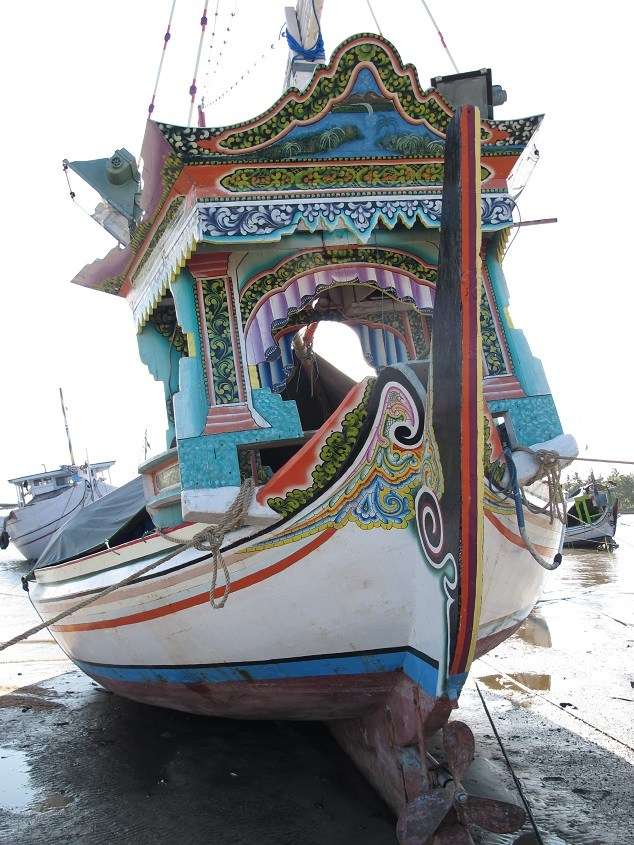 One recent innovation of the north-coast Madurese selerek is its extravagantly painted, open-sided pavilion or ‘pilothouse’ for the helmsman. Other notable features include the long, up-sweeping spars of bamboo poles called belandang that once were used to hang fishing nets out to dry, but now are purely decorative. The boats put to sea each night with all the decorations pictured here, but owners add even more bunting and banners for an annual blessing-of-the-fleet ceremony called Petik Laut. 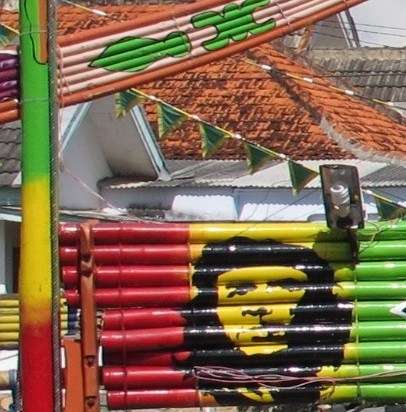 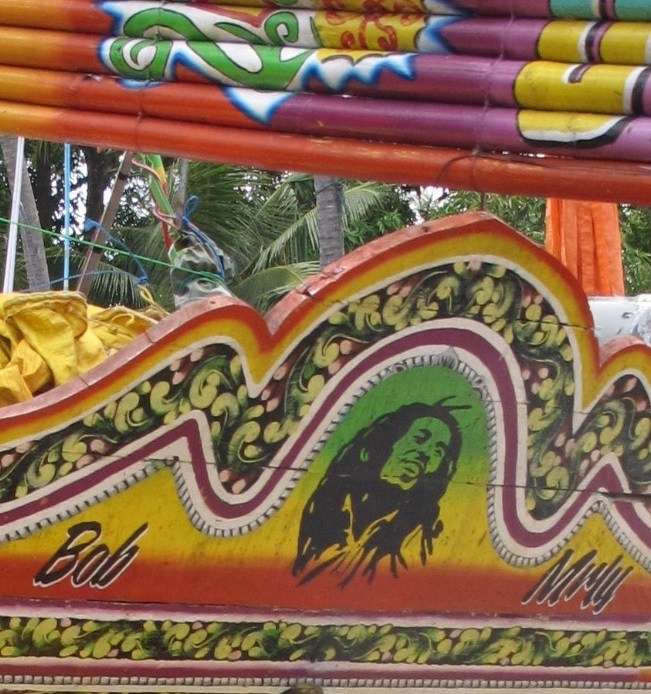 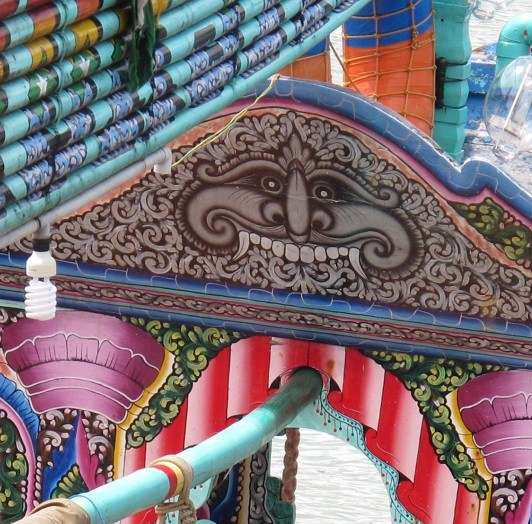 The decorations reveal a variety of aesthetic influences on this devoutly Muslim island, reflecting both courtly and folk-art styles and Indian, Chinese or European sources. Portraits of Bob Marley and Che Guevara appearing on two selerek were rather surprising, for this fairly conservative society. They may have been chosen as icons of rebellion against Western materialist values. 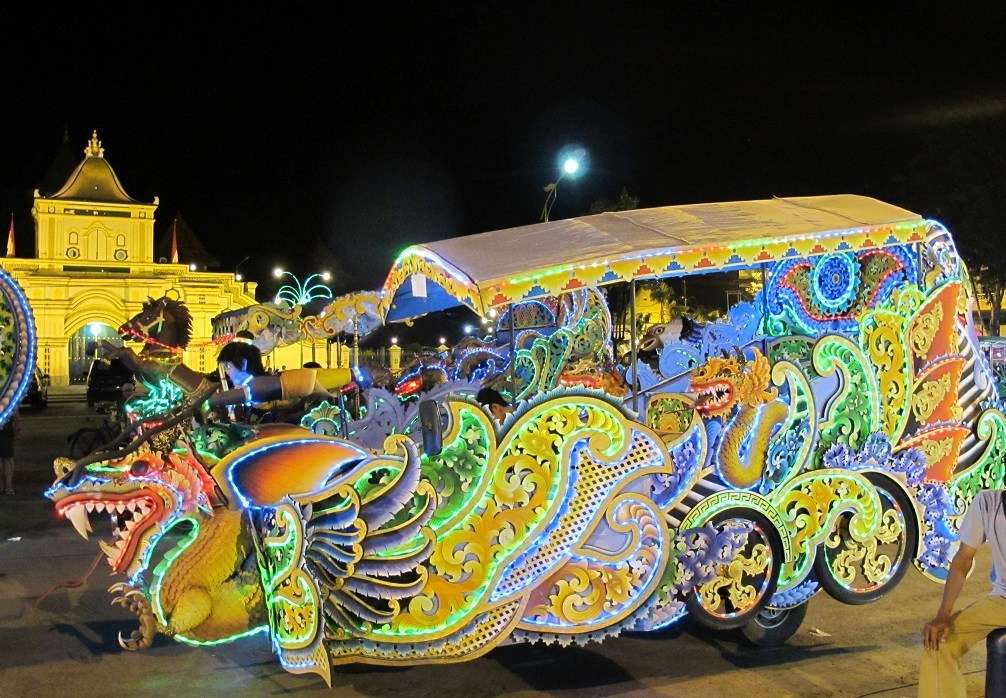 This outburst of decorative arts has spilled ashore, too. In the eastern capital Sumenep, the seat of former sultans, I encountered the extraordinary new carriages shown here, outside the 18th-century grand mosque. Powered by a motorcycle engine, they have passenger benches that are hidden behind elaborate, ultra-lightweight sculptures carved from sheets of the foam rubber normally used to make flip-flop sandals!

Tourists rarely venture to Madura – in part, it has to be said, because of a Madurese reputation for harsh manners and hot tempers. But for me Madura has always been a place of traditional Muslim hospitality, and from its boatbuilders, sailors and fishermen – whose work frequently exposes them to strangers from other ports – came the same welcome, courtesy and helpfulness I’d been accustomed to in earlier decades. 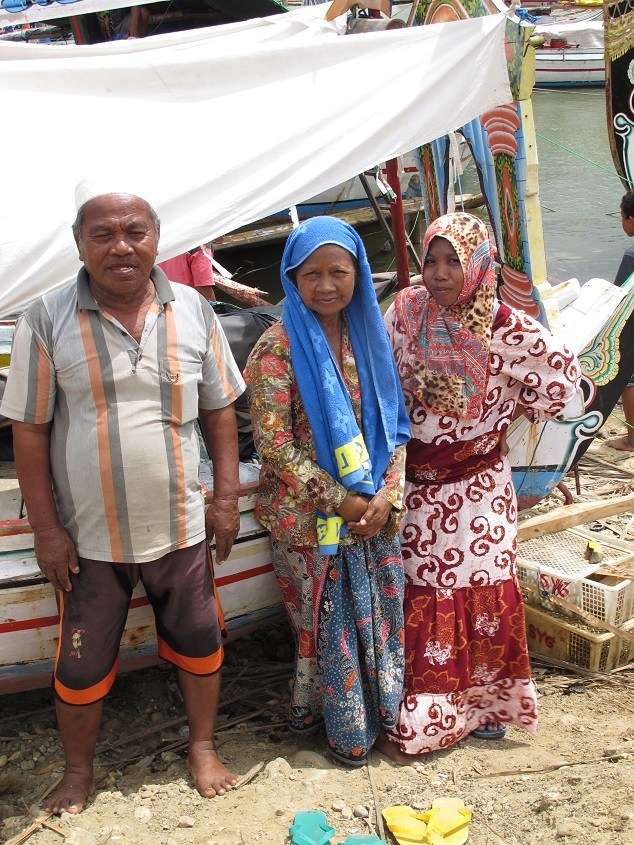 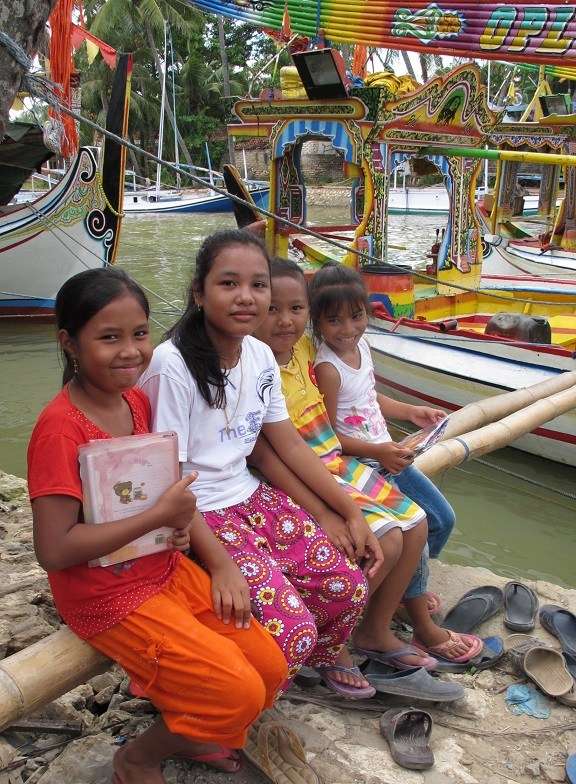 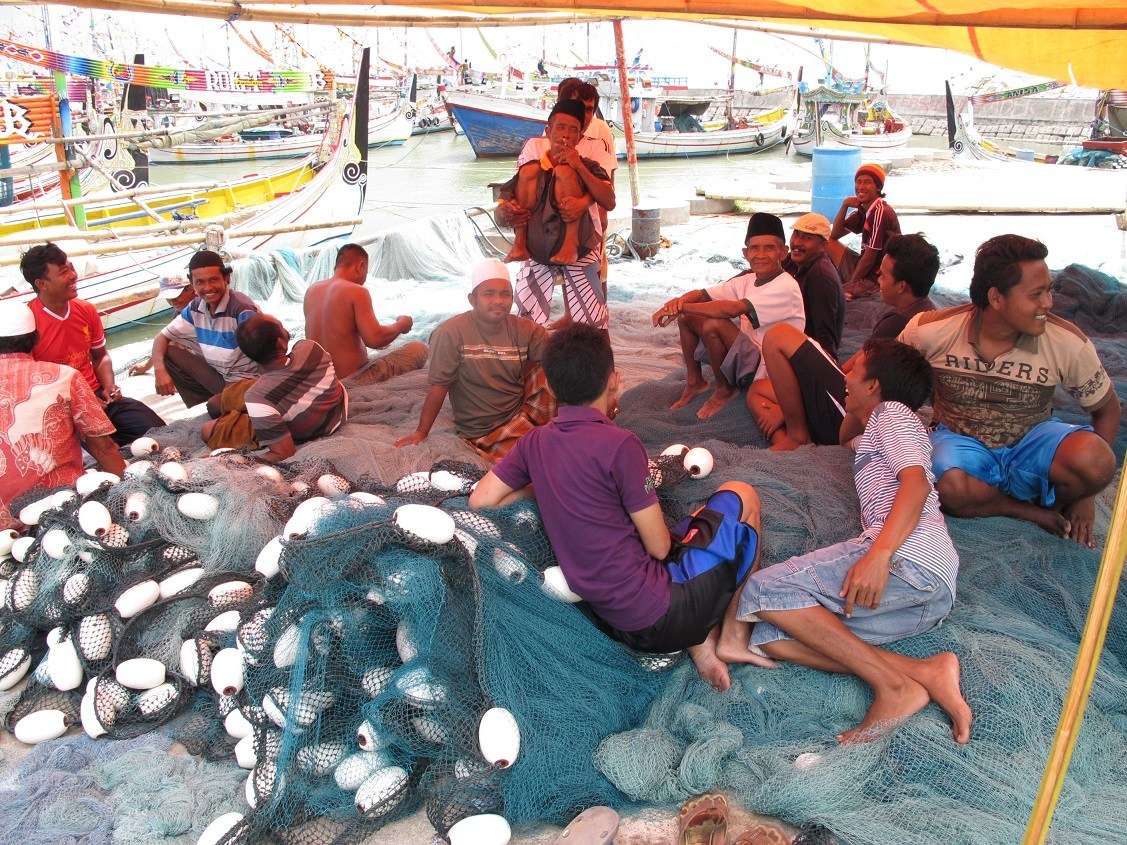 View all posts by Jeffrey Mellefont→
Posted in: Vessels , Arts and Culture
↑