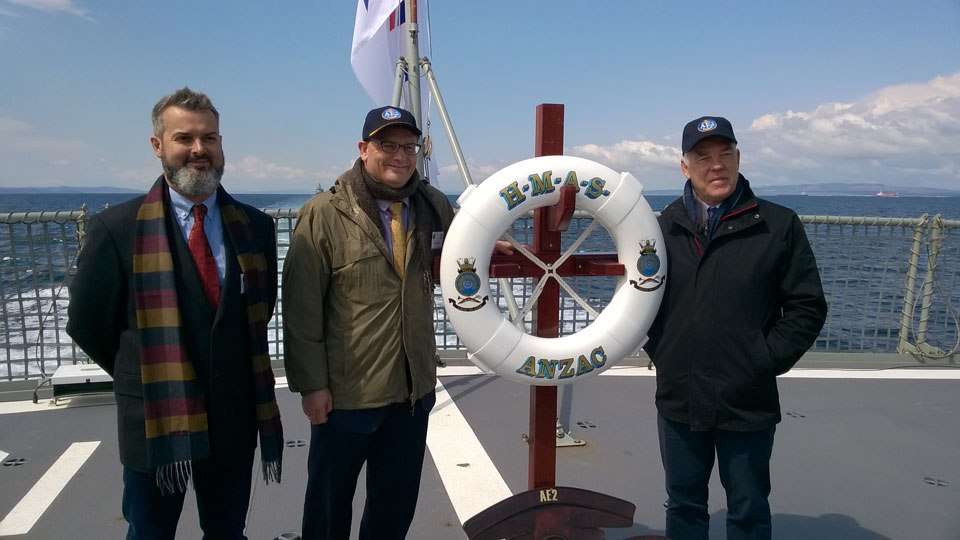 Between 17 and 25 April, I travelled to Turkey to participate in a closing conference and commemoration ceremony associated with the submarine AE2. AE2 was one of two Australian submarines to participate in World War I. It gained notoriety for penetrating the Dardanelles, a narrow and well-defended Turkish waterway that became a graveyard for a number of British and French warships — including two submarines — during an ill-fated naval campaign in March 1915. 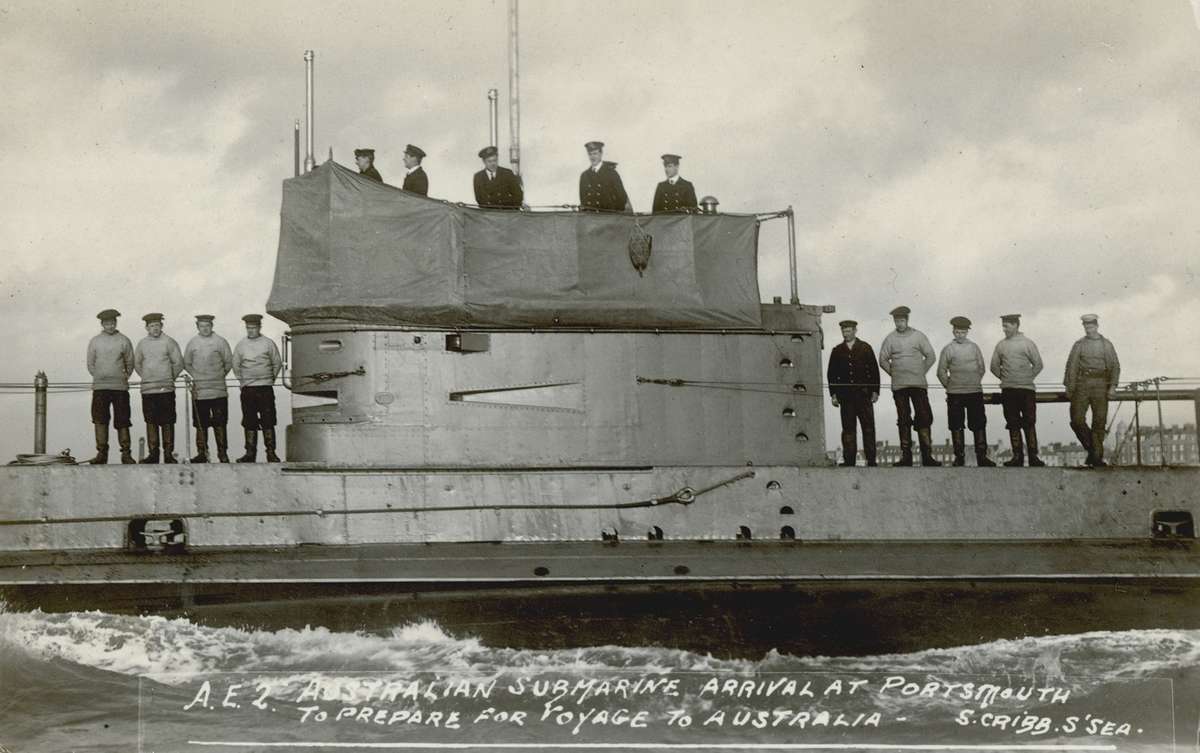 A postcard showing the crew of the newly completed submarine AE2 in Portsmouth in early 1914. It was sent by Lieutenant Geoffrey Haggard to a relative in London. ANMM Collection.

Under the direction of Lieutenant Commander Henry Stoker, AE2 ‘ran amok’ in both the Dardanelles and the adjacent Sea of Marmara in April 1915, attacking several vessels and damaging at least one Ottoman gunboat. Its success has been credited with boosting the morale of the Allied forces assaulting the Gallipoli peninsula. AE2 and its crew also demonstrated that submarines could safely negotiate the Dardanelles, and paved the way for a nine-month underwater campaign by the Royal Navy to disrupt Ottoman maritime supply lines in the Sea of Marmara. AE2 was attempting to rendezvous with one of these British submarines, E14, when it encountered the Ottoman torpedo boat Sultanhisar on 30 April 1915. While attempting to dive and escape, the submarine suffered mechanical difficulties, was forced to surface, and was damaged by gunfire from Sultanhisar. Stoker and his crew abandoned AE2, but scuttled their vessel to prevent it from falling into Ottoman hands. Sultanhisar’s crew subsequently rescued all of the submarine’s personnel and took them into custody.

AE2 lay forgotten on the bottom of the Sea of Marmara for decades, until discovered in 1998 by a team led by Selçuk Kolay. What followed was a 17-year effort to document and preserve the submarine, including two separate expeditions to film its interior via remotely operated cameras. The most recent of these, in June 2014, also featured the installation of a network of zinc anodes (known as a ‘cathodic protection system’) designed to minimise the corrosive effects of seawater on AE2’s hull and preserve it in place for generations to come. 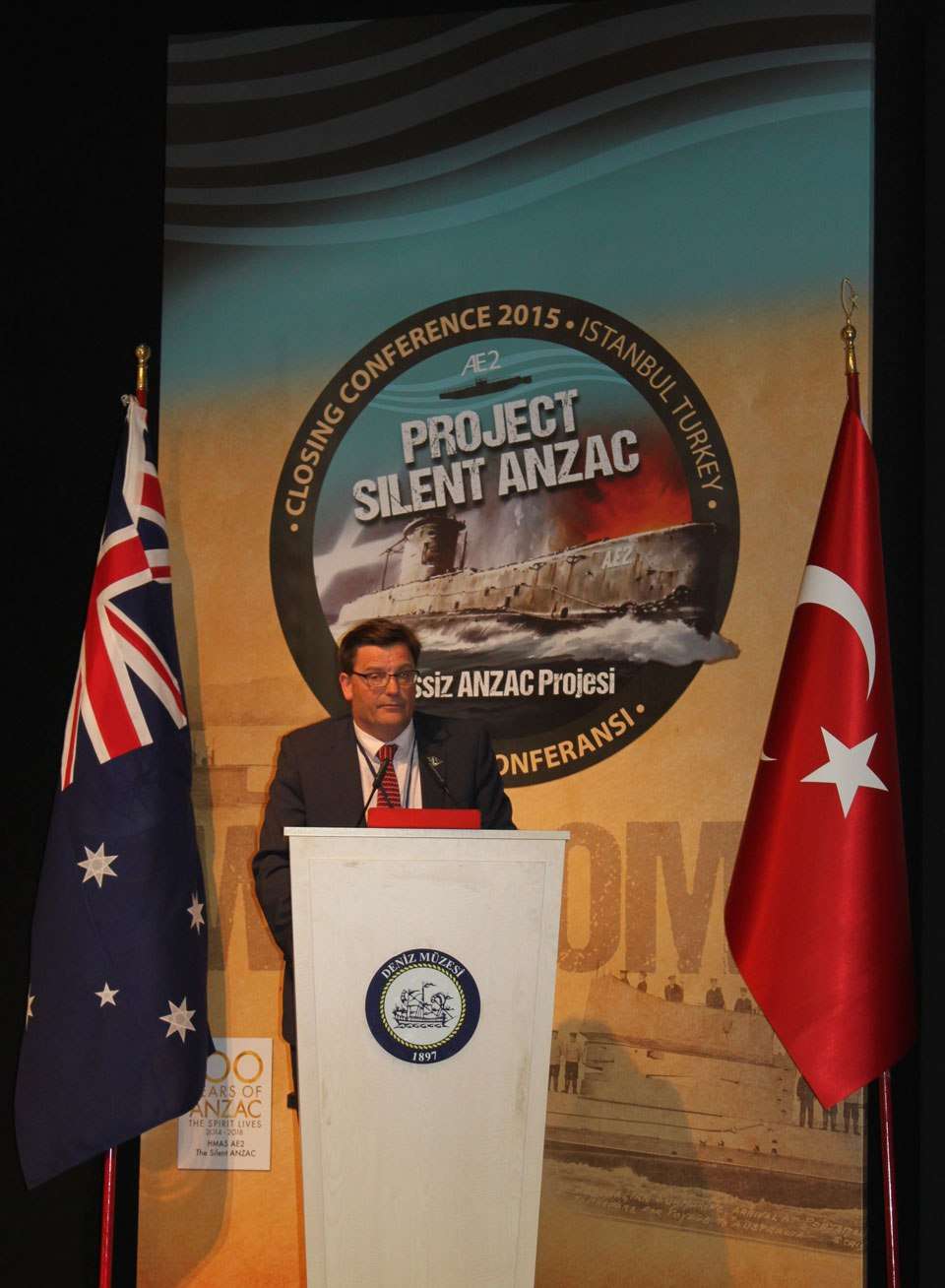 In July of this year, the Australian National Maritime Museum will assume management of the submarine from the non-profit AE2 Commemorative Foundation Ltd (AE2CF). Among other things, the museum’s responsibilities will include oversight of ongoing efforts at in situ preservation, as well as serving as the primary repository for AE2 project data storage and dissemination. A major component of the project handover is the ‘Project Silent ANZAC Closing Conference 2015’, which was held at the Istanbul Naval Museum (İstanbul Deniz Müzesi) on 20 April. In addition to myself, ANMM conference attendees included Kevin Sumption (Director) and Dr Nigel Erskine (Head of Research). The conference was divided into three sessions and featured several notable speakers, including the Commander of Turkish Naval Forces, Admiral Bulent Bostanoğlu. Talks addressed a variety of topics relevant to AE2, including aspects of its history, archaeological investigation, conservation, and plans for the future. In the final conference presentation, Kevin summarised the museum’s future plans for preserving and showcasing AE2, and highlighted some of the unique challenges the site presents from a management and exhibition perspective. 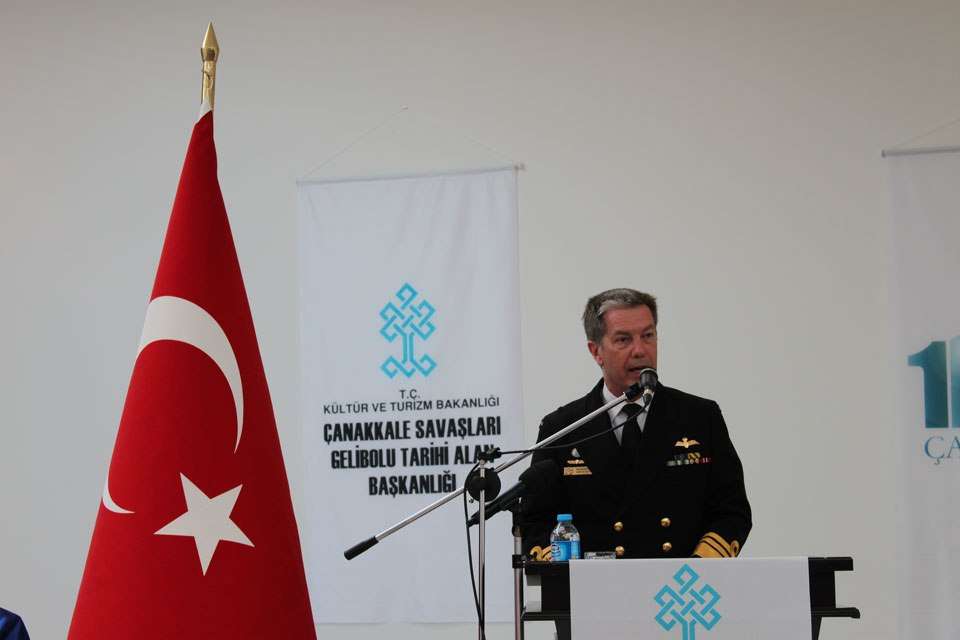 The conference was followed by a dinner that featured the Australian Chief of Navy, Vice Admiral Tim Barrett, as guest speaker. This provided an excellent opportunity to meet principal members of AE2CF in an informal setting and learn more about the project’s past initiatives and future aspirations. In particular, I was able to speak with Turkish stakeholders who are geographically closer to AE2, and therefore well placed to play a critical role in the site’s ongoing management. 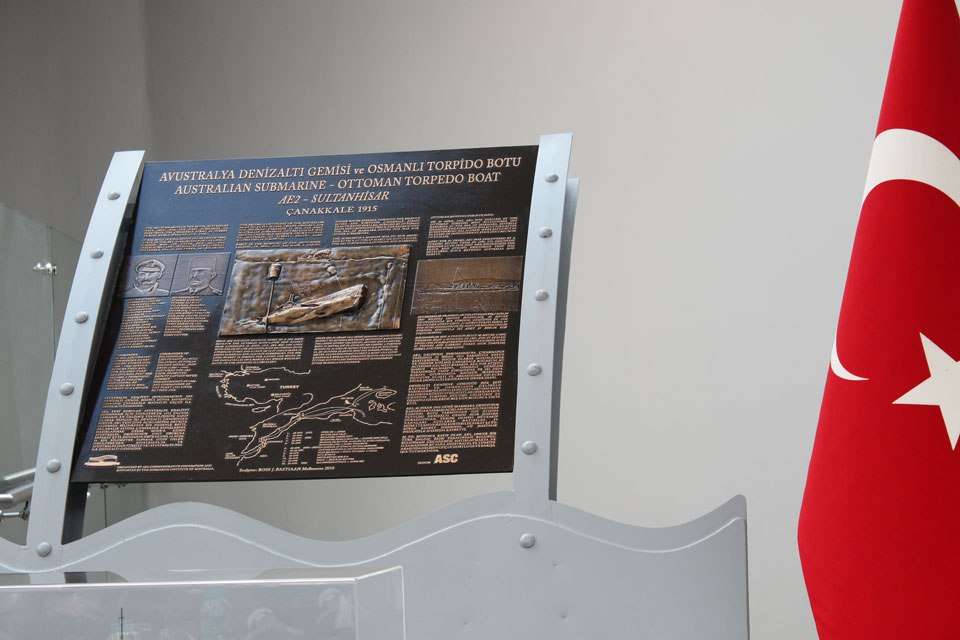 The plaque commemorating the engagement between AE2 and Sultanhisar after being unveiled at Kabatepe Simulation Centre. Photo: James Hunter.

Our group departed Istanbul early the following morning and travelled southwest towards the Gallipoli peninsula, where we attended the unveiling of a memorial plaque dedicated to the AE2–Sultanhisar engagement. The plaque is housed at the newly opened Kabatepe Simulation Centre (Kabatepe Simülasyon Merkezi), a museum that utilises both traditional and state-of-the-art immersive displays to highlight the Gallipoli Campaign. Because we arrived early, we had time to travel an additional three kilometres and briefly visit Anzac Cove, which was a hive of activity ahead of the Anzac Day centenary dawn service on 25 April. It was here that I met Hugh Dolan, author of a graphic novel about AE2 (The Silent Anzac) and an incredibly knowledgeable and engaging guide. 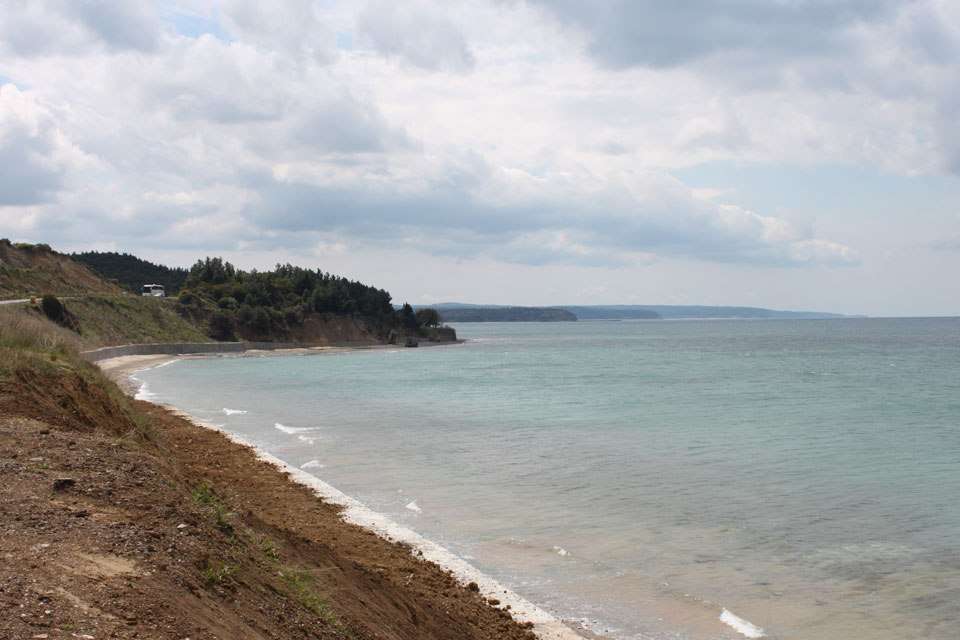 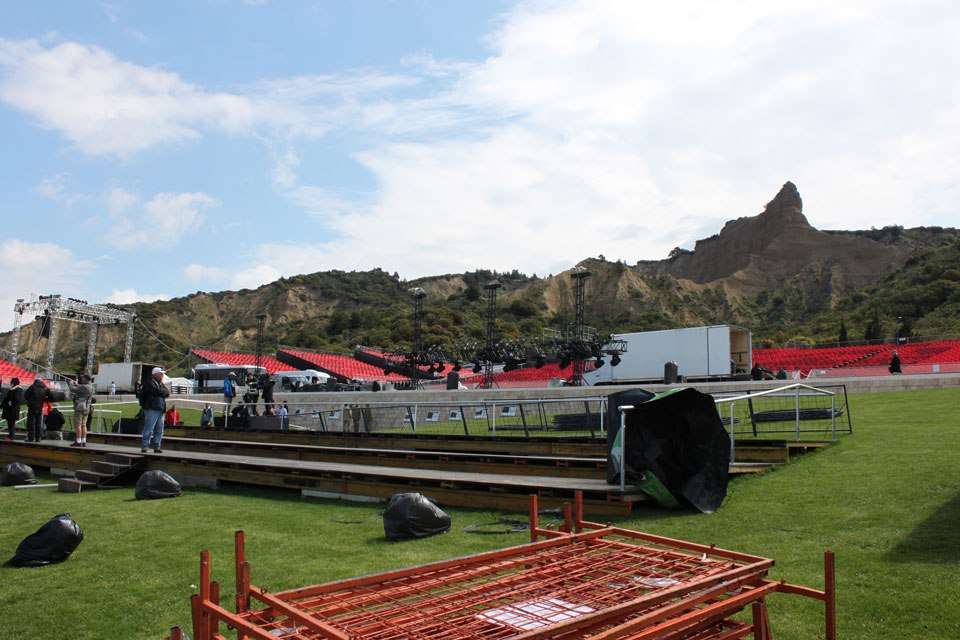 Preparations at North Beach ahead of the Anzac centenary dawn service. The famous ‘Sphinx’ is visible in the background at right of image. Photo: James Hunter.

Following the plaque unveiling, we took a ferry across the Dardanelles to Çanakkale, where we embarked aboard HMAS Anzac the following morning. Under an overcast and intermittently rainy sky, Anzac got underway with an escort of Turkish naval vessels and steamed up the Dardanelles into the Sea of Marmara. 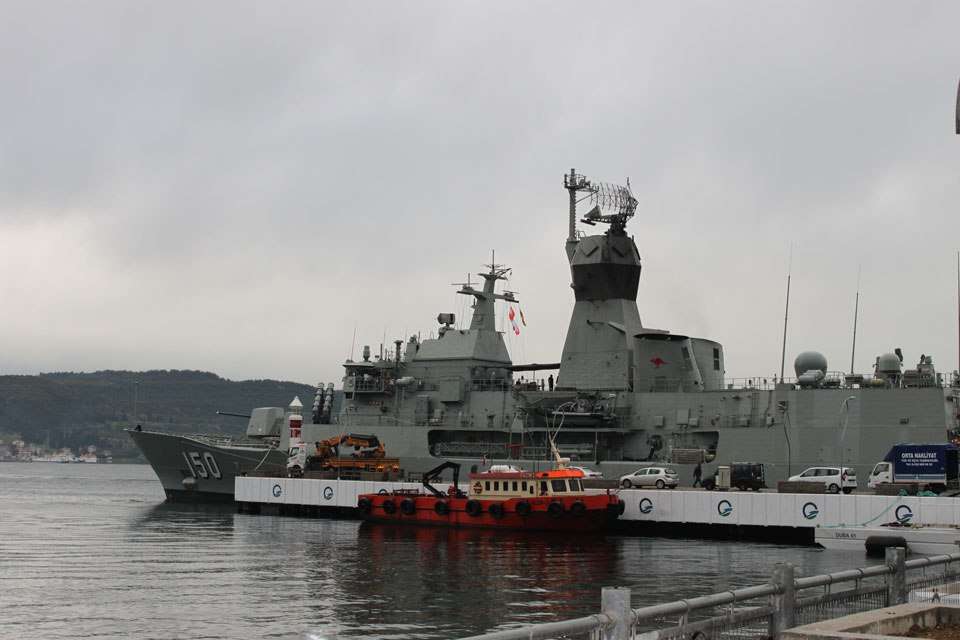 HMAS Anzac at Çanakkale on the morning of 22 April 2015. Photo: James Hunter. 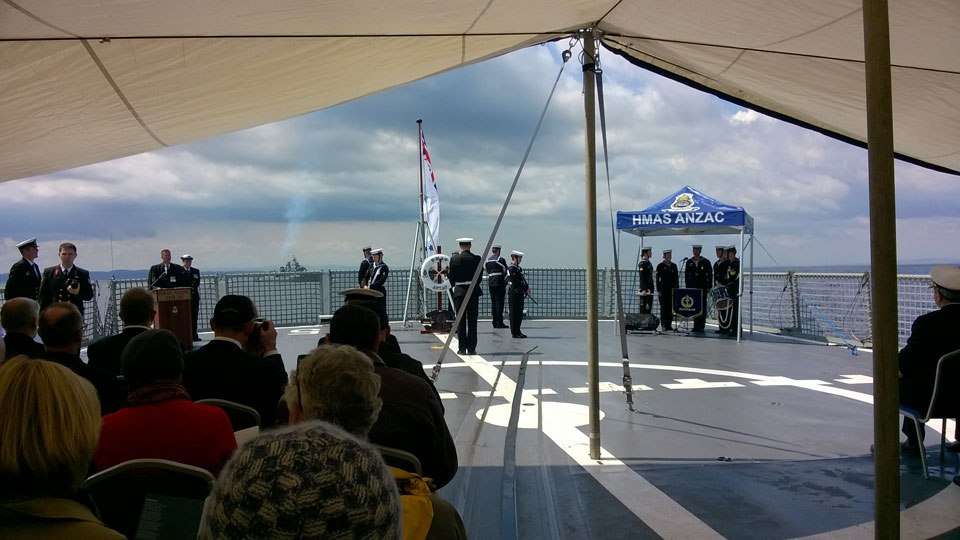 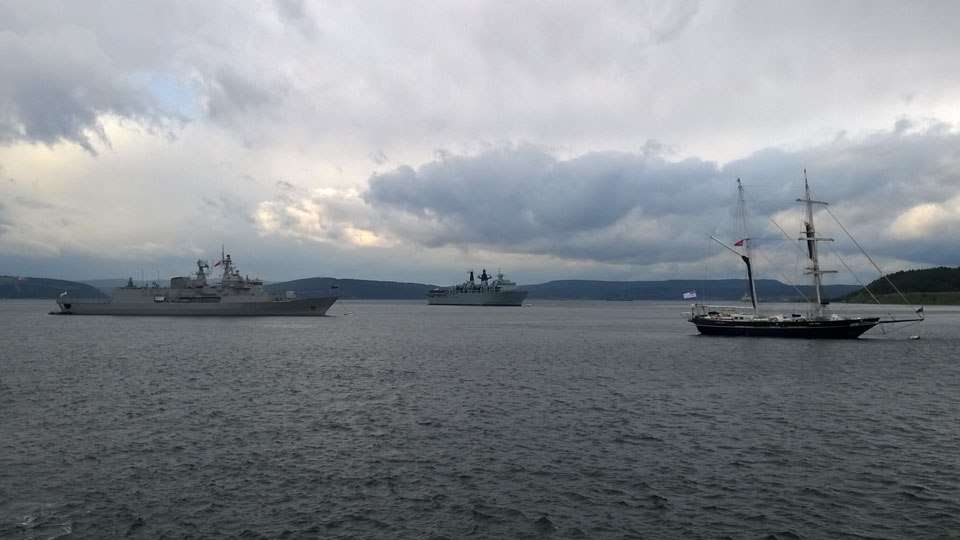 Approximately four hours later we moored over the AE2 wreck site and, as the commemoration ceremony began, the clouds parted to allow a brilliant sun to shine down on Anzac and all aboard. Following a religious service, roll call of AE2’s crew, and commemorative address by Vice Admiral Barrett, a wreath was laid on the site. Another wreath was presented by descendants of AE2’s crew, and the ceremony concluded with the Australian and Turkish national anthems and a benediction by Anzac’s chaplain. We then returned to Çanakkale, where other naval vessels from Australia, Great Britain and New Zealand had gathered for the upcoming Anzac centenary ceremony. Shortly after arriving, we boarded a bus for the long overnight drive back to Istanbul. 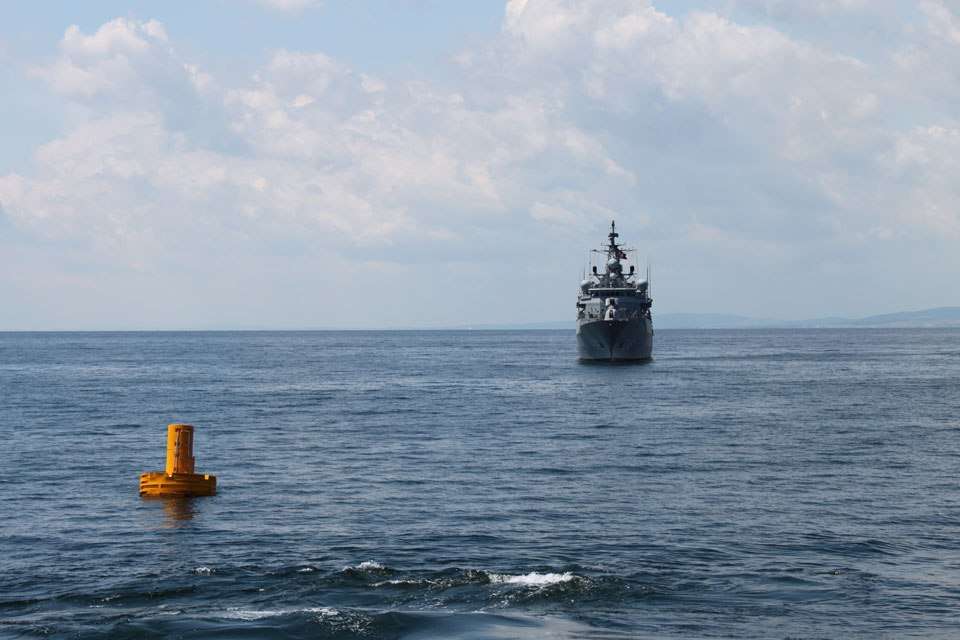 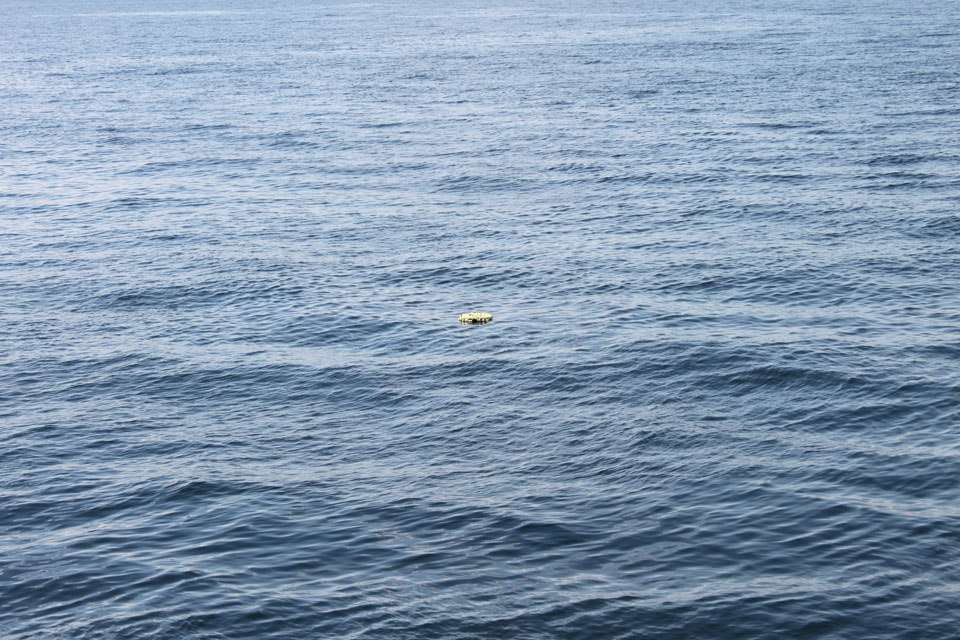 The wreath placed over the site of AE2. Photo: James Hunter. 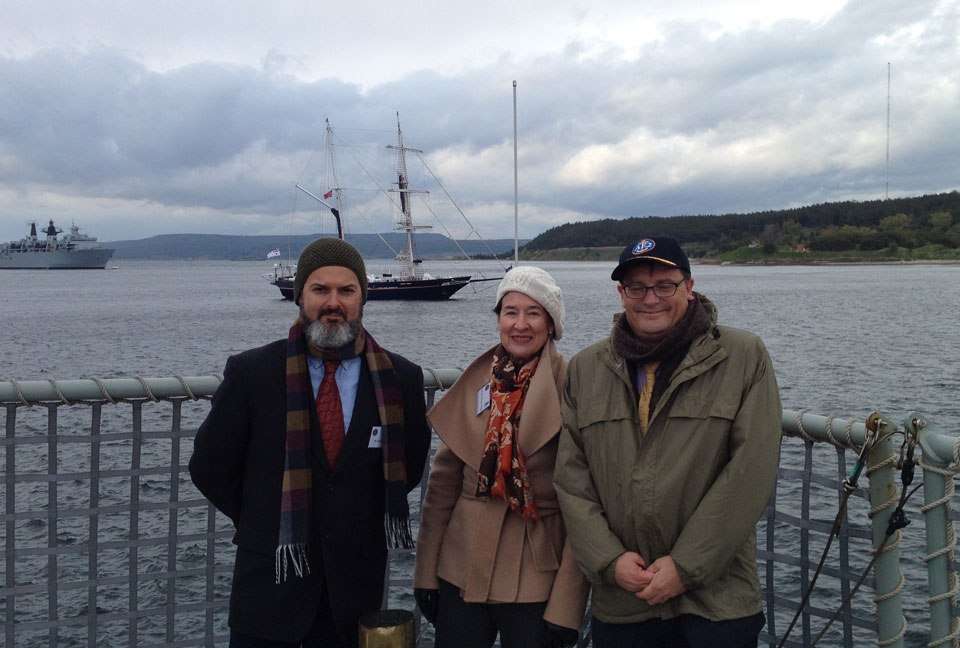 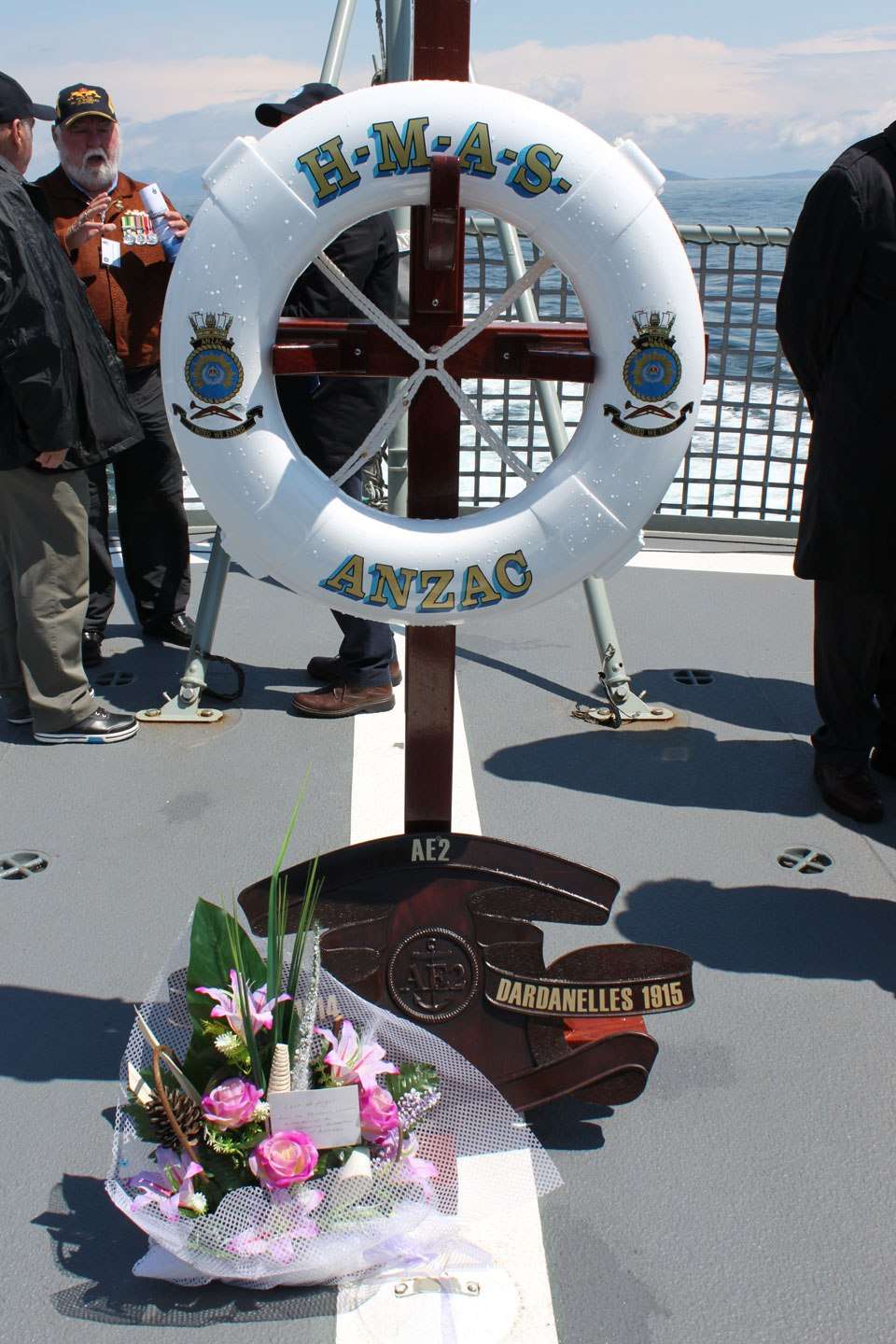 Although I am American, and have no familial link to Anzac heritage and tradition, I was moved by my visit to Anzac Cove and participation in the AE2 commemoration ceremony. Both events gave me pause to reflect on the sacrifices of those who fought on both sides of the conflict during the Gallipoli Campaign.

Find out more about the submarine AE2 and its ongoing research and preservation.

View all posts by James Hunter→
Posted in: Maritime Archaeology , Navy and defence
↑