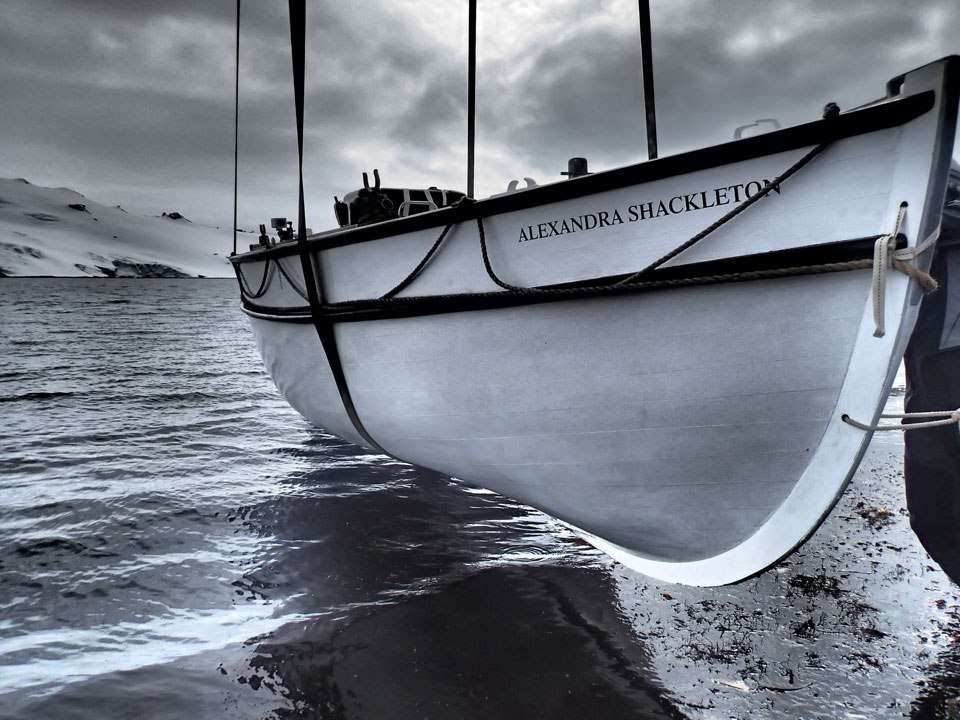 Shackleton: Escape from Antarctica opens on 2 April, and loan objects have been arriving steadily over the past few months.

Alexandra Shackleton is a special addition to the exhibition. The 7.6-metre boat is a replica of the James Caird, the lifeboat Sir Ernest Shackleton used to seek the rescue of his stranded expedition members after the expedition’s ship Endurance sank, crushed by ice in Antarctica. 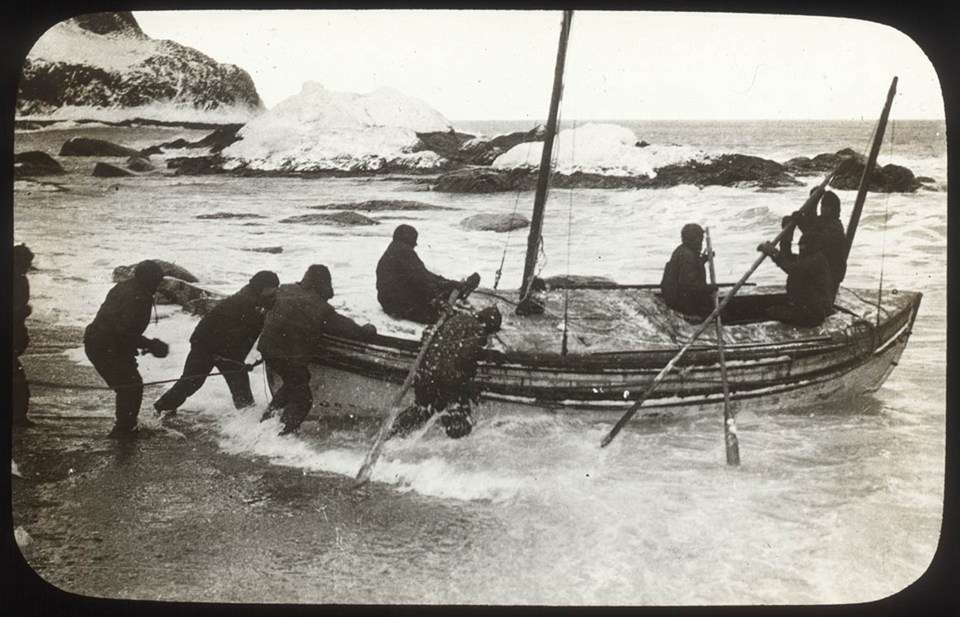 When the museum considered mounting an exhibition on Shackleton, we approached Tim Jarvis to borrow the boat as a centrepiece for the show, which would include objects from early 20th century Antarctic expeditions, as well as the 2013 re-enactment. Though small to be sailing around the seas of the Antarctic, the boat is quite large to be transported from the UK and moved in and around the museum. 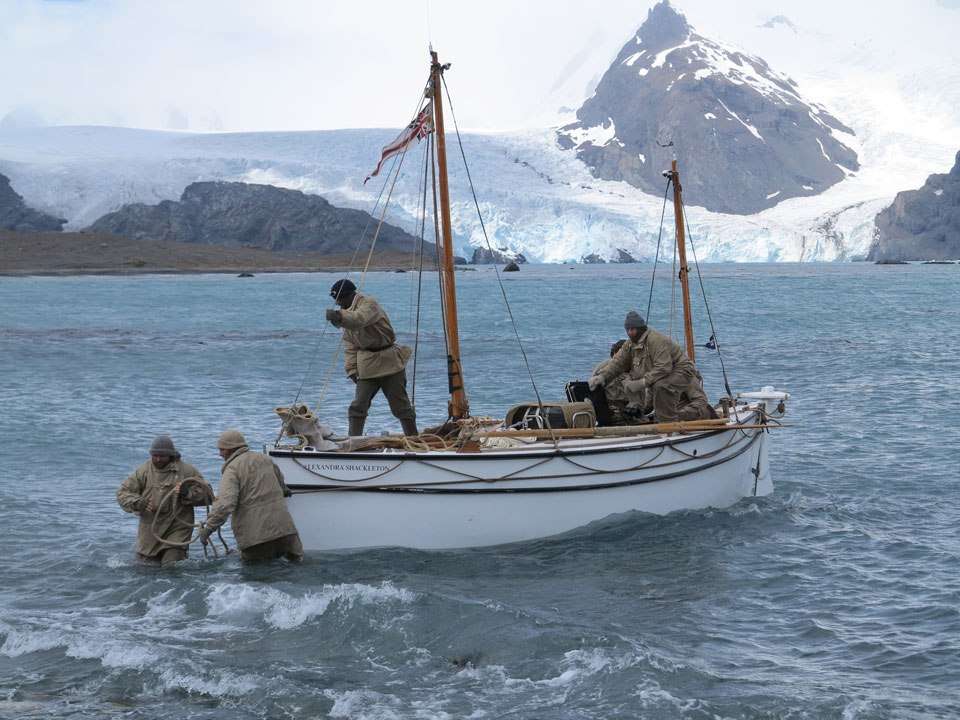 Lengthwise, the boat could have just fit into a standard 40 foot shipping container. Its width, however — 2.5 metres — meant that it was too large. The solution was to use a flat rack container with no sides.

As the boat was basically open to the elements, its deck was heat shrink wrapped to give some protection on the voyage. Weighing in at 2.5 tonnes, the boat had to be craned on and off the container.

The Alexandra Shackleton arrived at the museum in a semi-trailer on a sunny afternoon, still in its flat rack container. A second truck arrived with the crane that would remove the boat. Both trucks had to reverse into the carpark for unloading. 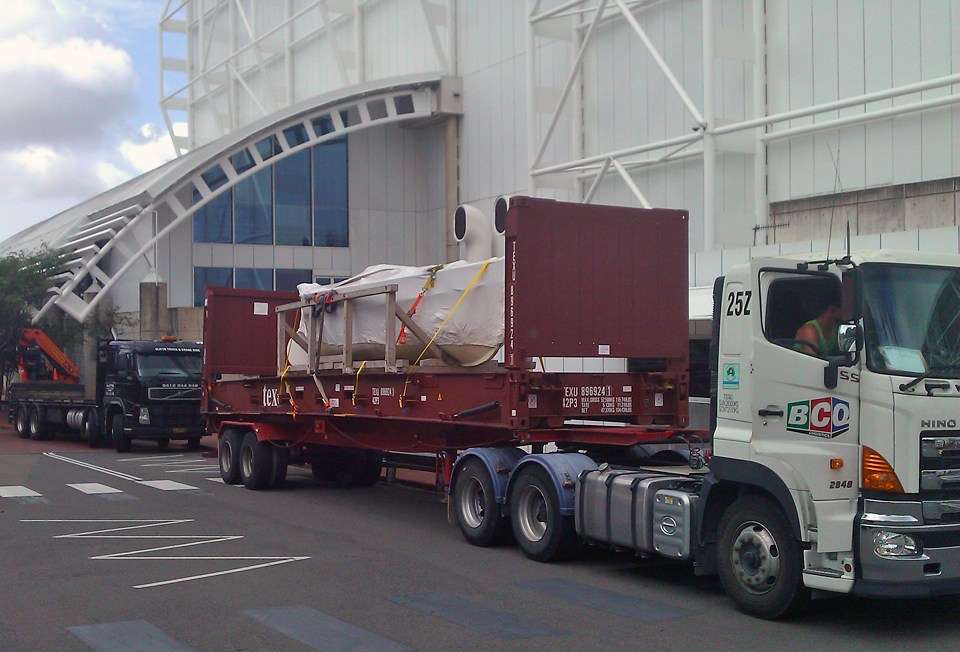 The Alexandra Shackleton arrives at the Australian National Maritime Museum. 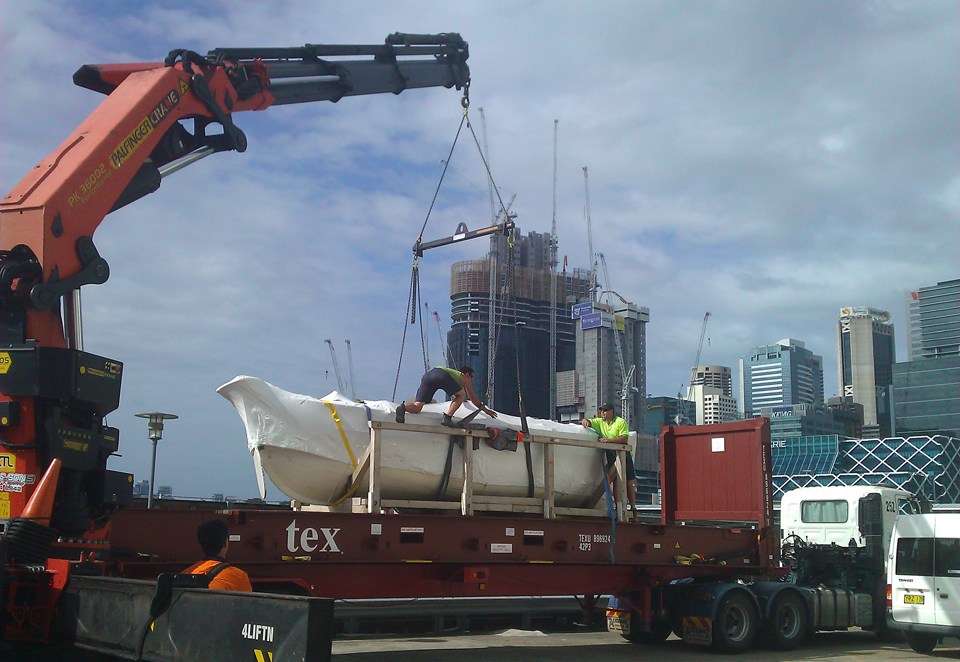 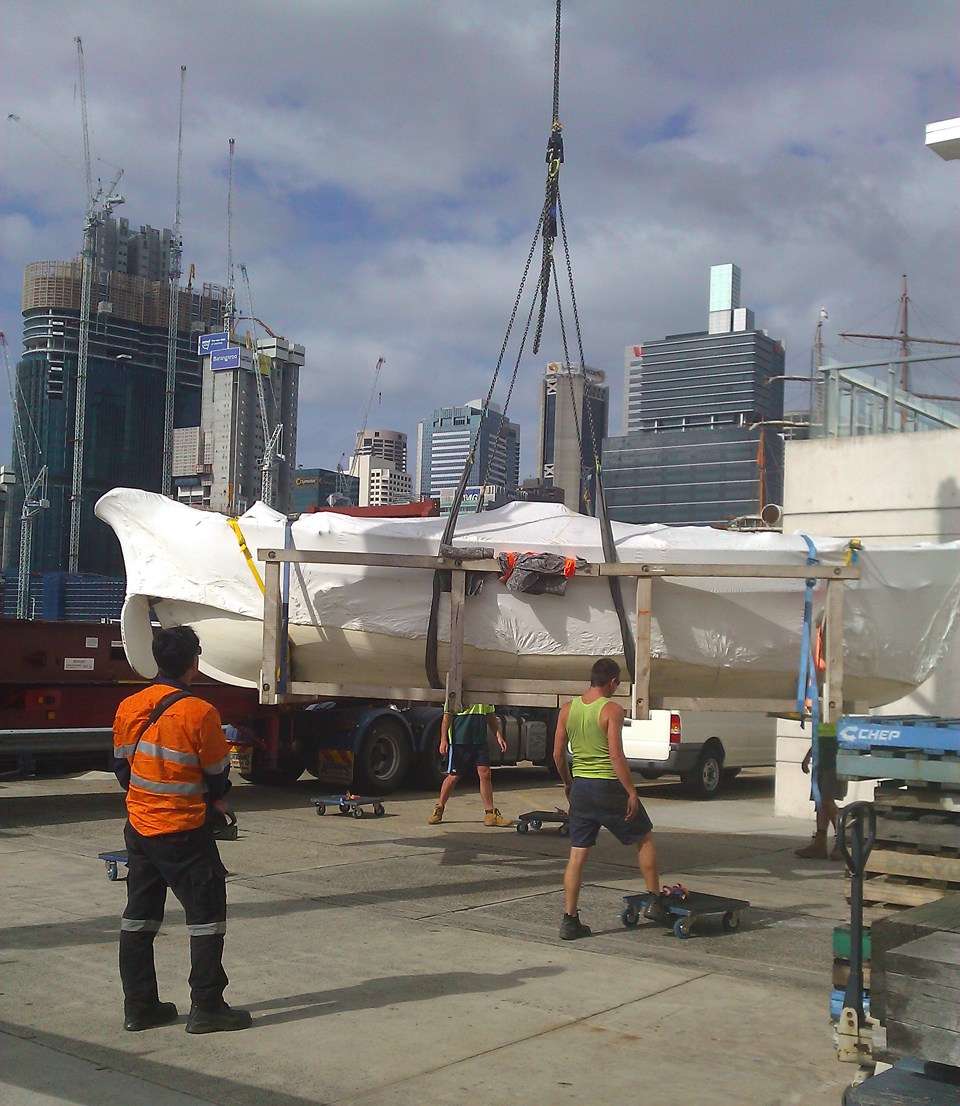 The boat being craned off the truck onto waiting dollies.

After prepping, the boat was craned onto waiting dollies and the shrink wrap was removed. The boat could then be inspected and cleared by Quarantine. The main concern was termites. To this end Biscuit, the termite dog, was employed to sniff them out. Having found no evidence of termites the shipment was cleared and museum staff could begin preparing Alexandra Shackleton to go on display. 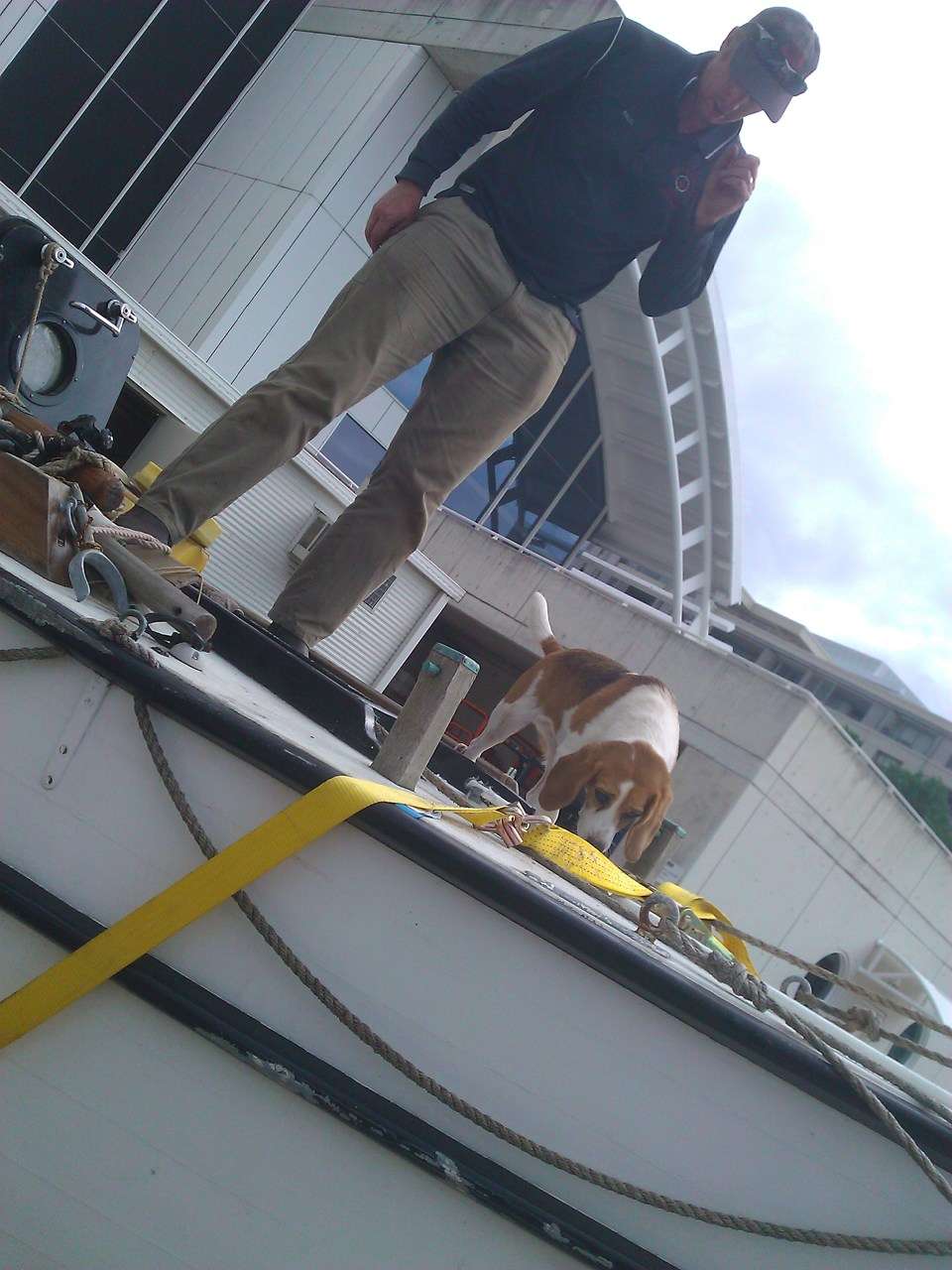 Biscuit, the termite dog, in action. 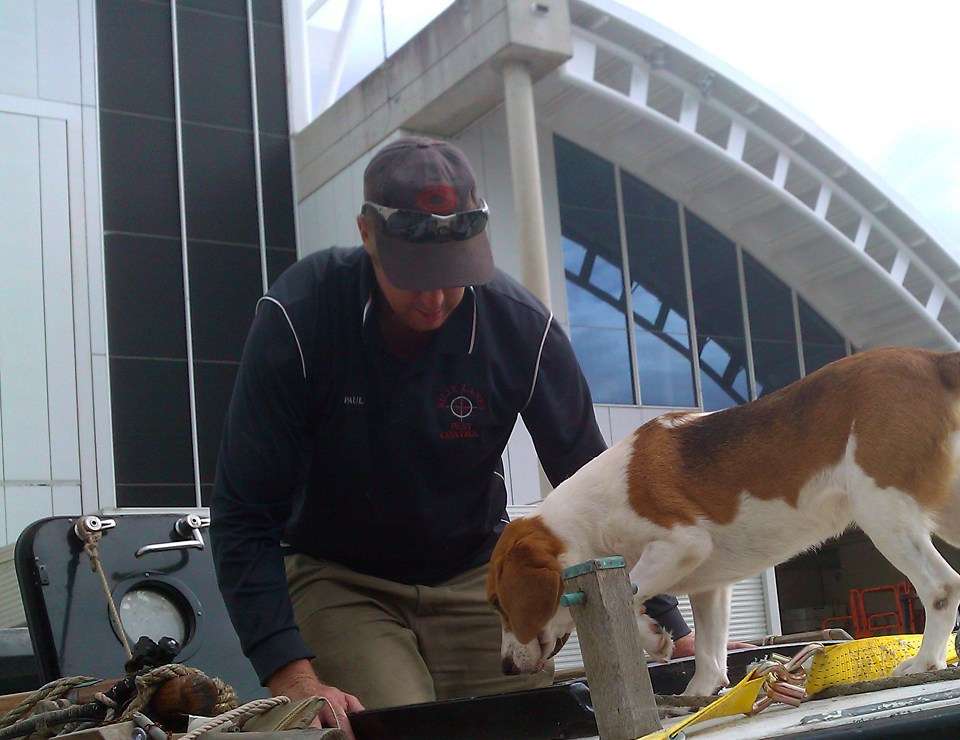 Shackleton: Escape from Antarctica runs from 2 April to 29 November 2015 at the Australian National Maritime Museum. You can read more about Tim Jarvis’s expedition on the Shackleton Epic website.

View all posts by Will Mather→
Posted in: Vessels
↑