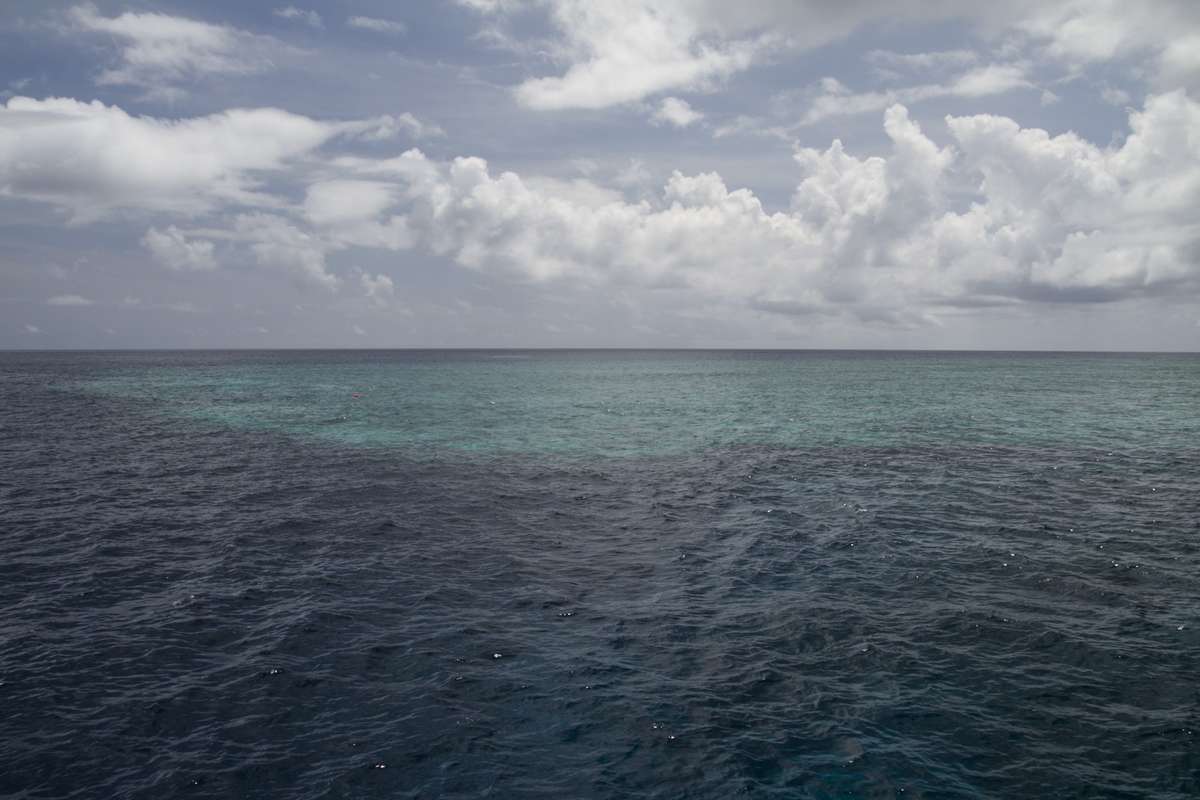 After an 18-hour trip, the expedition team arrived at the northern edge of Ashmore Reef on board the expedition vessel The Boss. Towed behind The Boss were one of two rigid hull inflatable boats (RIBs) and the Silentworld Foundation’s small survey catamaran Maggie II – also known as The Caravan of Courage because of its unique deck cabin that looks remarkably like a small 1970s caravan.

Once in the general area – and after following the carefully worded directions provided by the crew of HMAS Benalla – the shipwreck site was speedily located and buoyed and in almost perfect weather conditions the first groups of divers entered the water to appraise the site.

On first inspection, the site – lying in water two to eight metres deep almost on the very edge of the northernmost tip of Ashmore Reef – consisted of a series of scattered iron lumps and bumps, numerous sections of broken iron chain, several anchors, stone ballast, iron and copper fastenings and lead and copper hull sheathing strewn over a coralline rock bottom among scattered patches of coral. 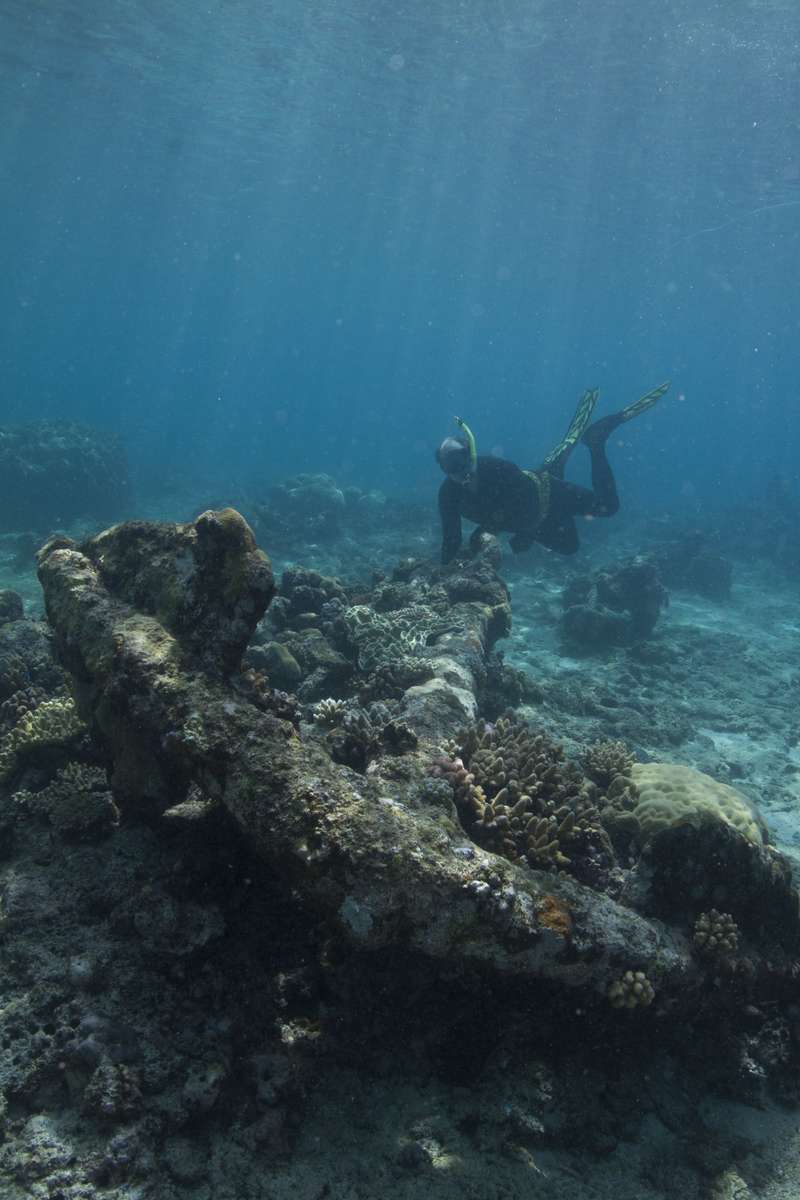 Hanging and lodging knees are positioned hanging vertically from or lodging horizontally between the (usually) wooden deck beams of a vessel, while rider knees hang down between the hold beams and are attached to the vessel’s floors (frame) through the ceiling planking of the vessel to provide additional strength to the lower part of the hull. Crutches and breast hooks, on the other hand, are used to strengthen the stern and bow of a ship by being placed horizontally across the inner stem or stern posts, cant frames and ceiling planks.

Although first suggested by Sir Anthony Deane in the 1670s, iron knees do not appear to have been introduced into European shipbuilding until the mid-18th century – with Falconer first recording their use as a French Navy innovation in 1780. Interestingly, Gabriel Snodgrass, the chief ship surveyor for the Honourable East India Company (HEIC) between 1757 and 1794, appears to have been the first advocate for the use of iron knees in British and Indian shipbuilding and was instrumental in having the HEIC use iron in their vessels for knees, stanchions, breast hooks and crutches from the early 1800s, some 20 years before they became common practice in British-based merchant shipbuilding.

The divers also reported back that they had found at least two medium-calibre carronades – short-barrelled iron cannons originally built by the Carron Iron Foundry of Scotland in the late 18th century but relatively common on both sides of the Atlantic by the early 19th century. They also found what appeared to be a single example of a Sepping ‘braced knee’ – a type of hanging knee designed by the naval architect Sir Robert Sepping in the early 1800s. 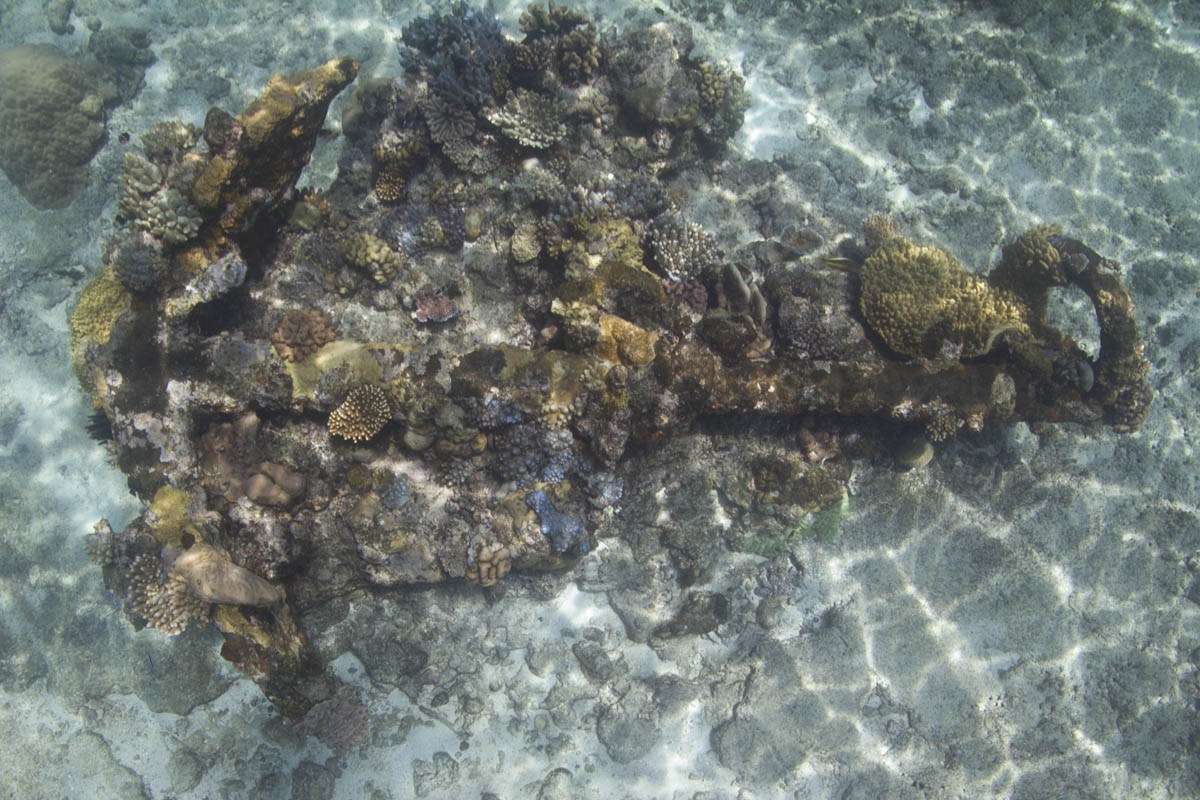 The anchors that the divers observed were a bit of a mystery. The larger anchors were late 18th- or early 19th-century in appearance, having large flukes, being fitted with iron rings (so as to allow the anchor to be attached to a large hempen or coir cable), and having once been fitted with wooden stocks that had since rotted away. The smaller anchors, however, were of a more modern design. The flukes and crown of these anchors were more rounded and had once been fitted with iron shackles (to secure a chain anchor cable) and removable or collapsible iron stocks.
With the first site assessment completed and with the weather pattern expected to hold for the next ten days, we hope to be able to learn more about this mysterious vessel.

Read more posts in the Ashmore Reef Expedition series, or find out more about the museum’s maritime archaeology program.