SY Ena, the museum’s glamorous guest and visiting vessel from February to June this year has moved on, and without too much fuss has arrived on Port Phillip in Victoria. 20 years on from the book ‘SY Ena: Aurore, HMAS Sleuth’ by Alan Deans, a new chapter is now ready to write – and the prologue is how it got there. 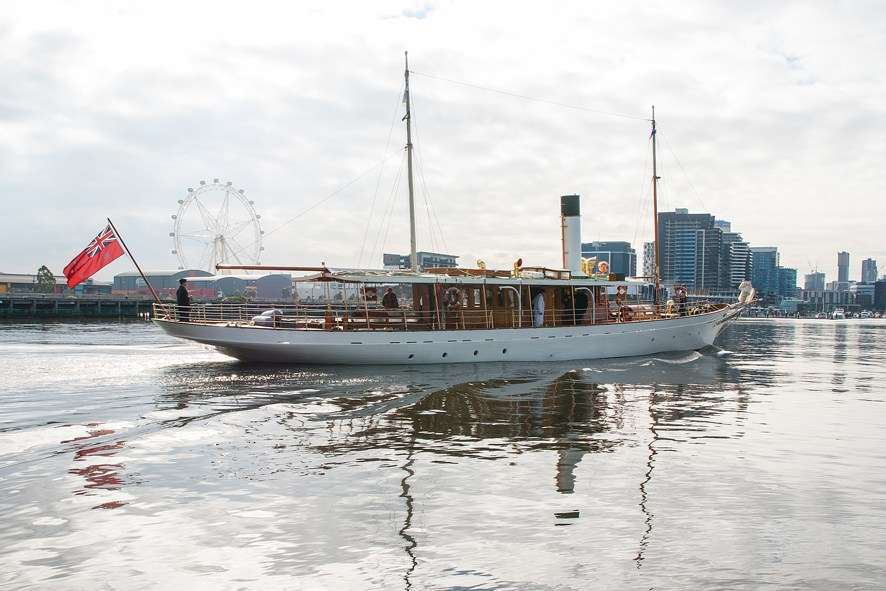 It begins with planning: a big spread-sheet of items, actions and personnel that was emailed to all connected with the planned voyage weeks beforehand. With the expectation that things would be added to it, the lists quickly grew and by and large, it all came together.

Engineers, shipwrights and others dropped by to assess things, off site preparations brought materials together, and with a week to go in late May it all descended upon Ena as the vessel sat on the Heritage pontoon, looking as elegant as always. Rafted up next to it was a big contrast, the 20m unpainted aluminium schooner yacht Blizzard, the shore base and soon-to-be mother ship for the trip south. Amongst this activity Ena managed two steamings for guests, various radio and TV appearances, off-loading unnecessary items, taking on fuel, food and fitout, a hose down and even some varnishing. 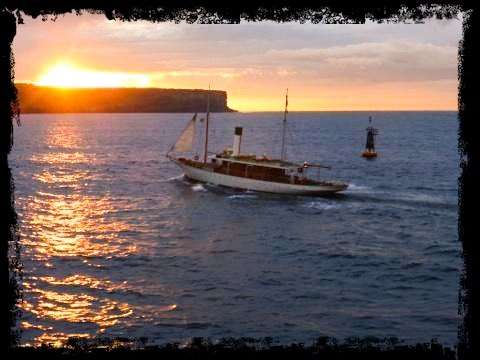 AT 4.00am Monday 2nd June the crew flashed up the boiler and began preparing for sea. At 6.00am they said farewell to ANMM Security and soon after eased out through the heads, with following winds and seas forecast to get them to Eden and bit beyond.

The crew comprised of Jonathan and Hamish Turner (masters and owners), John Davis (chief engineer), Mark Dye (2nd engineer), Thomas Lord (3rd engineer), Darren Downey (4th engineer), Tom Hughes (Old Tom/ mate and Dibbs family representative), Darren Mann (boatswain) and Russ ‘bilge rat’ Anderson (peggy, cook, go-for etc). All had many sea miles and steam hours amongst them and Ena knew the way. As the fishing boat Aurore, Ena had travelled to Hobart and back up to Queensland, and once, rebuilt to her proper period dress in 1986, it had voyaged to Fremantle and back. 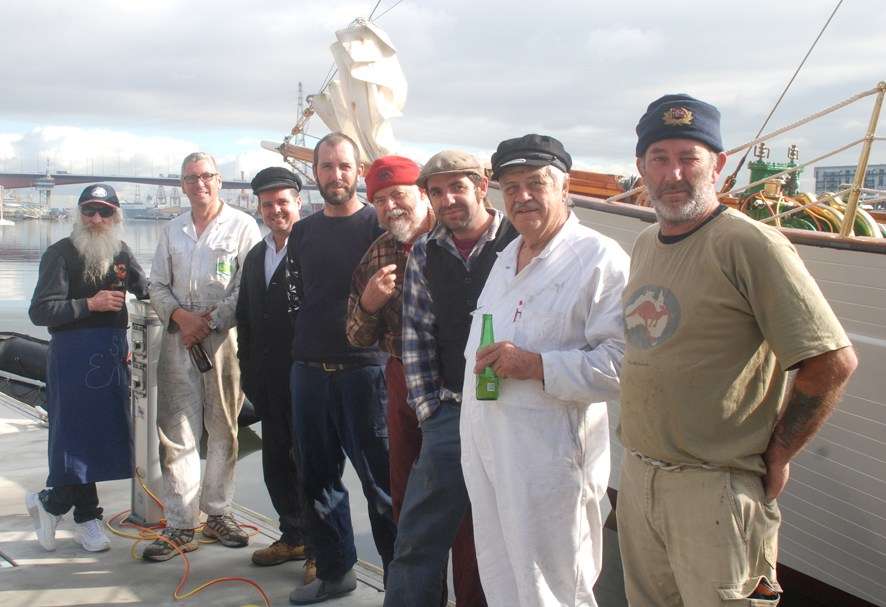 So, the open ocean was no secret to Ena, but everyone knew its real home was on sheltered waters. Naval architect Walter Reeks had produced a superb gentleman’s steam yacht for Sydney Harbour and it was out of its comfort zone as it turned on to a southerly heading with Eden the first planned stop. After only 5 minutes on this heading they discovered a problem only the open ocean would throw up – the rolling motion affected the water in the boiler, emptying the low water cut out chamber causing it to shut down the burner! (And set off an alarm, just in case you did not yet know.) The engineers certainly did, and soon had an override in place. 240v power was used to drive the sparker and the fuel valves manually opened and fire was back on. Now, instead of losing the fire on each wave which sounded loud bells to panic the passengers, they just had a very discreet soft beep from the boiler control box that only the engineer knew how to read, blended in with other engine room squeaks. When they became more frequent, you knew it was time to speed up the weir boiler feed pump. A great old system that should never have been fiddled with in the first place!

A hydraulic issue surfaced a little later, when too much fluid leaked from a loose fitting but topping things up kept that under control, meanwhile Eden drew closer, as did a warm meal and a few other comforts, before they headed off again.

Off Wilsons Promontory with the wind and waves head on they discovered what had always been suspected – that the long and narrow Ena prefers to go through the waves, rather than over them. This was confirmed by Darren Mann while sitting at the helm 10 metres back from the bow. He saw Ena bury her nose into a big wave and flick it over her decks drowning him in a big sea of green cold water! Ena has an open platform out in the weather on which to stand and steer, great in the harbour, but not so good out at sea.

As they approached Port Phillip, indecision about the best time to pass through the heads had them slowing then speeding up and then slowing again. Fine on the engine telegraph but not so good in the engine room as Mark Dye relates:

“Don’t they know how difficult it is to get everything settled back down and running efficiently again after a speed change? Boiler fuel pressure, feed pump speed, circ pump speed to get the condenser vacuum right without over cooling the condensate, then they would change again! I called up the voice pipe; this is not a diesel engine like Blizzard has. Show some respect for this old lady!“ 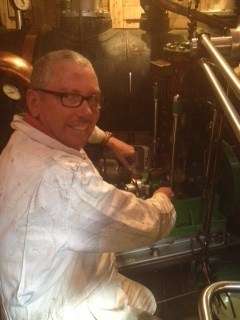 Mark Dye, 2nd engineer, steam boat owner and steam enthusiast, working on the Mumford circulating pump and in his favourite office, the engine room of a steam vessel. Photo by Tom Lord.

Once through the heads at Port Phillip they went up the Western channel back into deeper water, then headed straight for Williamstown, into the Yarra River and up to Docklands, tying up next to Etihad Stadium.

Having left Sydney moored adjacent to the CBD, they were in a new city, also just a short walk from the city centre, and as I was in Melbourne over the long weekend I wandered down Bourke St to meet them on the Sunday, all too easy.

Two days later they were back out onto the bay for an official welcome to the port, with flags flying and other vintage boats out to join them. Soon Ena will be out there again, once it’s had a bottom clean, a bit of TLC all round, and the cushions put back in the saloons.

Written with help from Mark Dye’s own story of his experiences on the passage. See David’s previous blogs on this historic vessel.