At the invitation of Dean Kelly, National Parks and Wildlife Service Aboriginal Community Liaison Officer I was invited to attend their Sydney Aboriginal Community Cultural Gathering at Bents Basin near Bringelly, NSW, 16-19 May. I was there to facilitate a canoe building activity as part of the Saturday cultural activities. Last year I went out for an afternoon with senior curator Daina Fletcher where we made a large model nawi, but this year Dean and I set out sights higher, and achieved the goal, but not without significant help in the lead-up.

It starts with sourcing the right material- stringybark- and it is a matter of patience. Initial enquiries were made in Spring 2013- but then waiting for the right conditions took until just prior to Easter this year when Darren McGlashan, Harvesting Coordinator from Central Region Forestry Corporation NSW, contacted me to say the team working in the Watagan State Forest had put aside some stringy bark that could be collected in the middle of May.

It was located well into the bush and this was logging roads and 4WD territory, so with help from Education Officer Anne Doran and former Fleet surveyor Warwick Thomson we had two 4WDs and trailers. On Friday 16th May we met up with Donna Carstens (our Indigenous Programmes Manager and Curator) at Cooranbong near Morisset on the Central Coast, where Darren was ready to escort us in with a 45 minute drive. It was a working site, so once there we were given hard hats, fluoro vests and a safety induction, before trimming the bark to suit the cradles I had made to support the sheets. Darren and the team also gave us an introduction and education on the trees around us and how they undertake a sustainable logging programme. After that we headed down to the main road, two sheets of bark going with Anne and I and the remainder with Warwick.

Meanwhile, Donna had stayed at Cooranbong where she had met the students from Lawrence Hargrave School, with whom we had done a model making workshop in February. (Check out our earlier blog on this great workshop.) She gave them some cultural background to the area and the trees to give context to the material they had used for the model. Once back at Cooranbong we checked the loads and headed south again, Warwick took his bark to the museum, while Anne and I took ours to Bringelly, to be used the next day. It was a long, long day, dawn to dusk and a bit more, but well worth the effort.

The Gathering was terrific occasion. Members of a diverse range of communities joined to meet and share each other’s company over three days, with the middle day, Saturday set aside for a range of cultural activities. Sitting under trees artists and craftsmen created traditional artefacts, demonstrating the techniques and materials that are used. My role was to build a nawi tied bark canoe, and I was joined by Steve Russell from the Bidjigal language group, born at La Perouse and now living on the south coast. A highly accomplished and respected basket weaver and artist Steve had also been part of the group who built a nawi at Bundanon in 2012, and brought it up to the Nawi conference. He had not had an opportunity since then to make another canoe, and this was an ideal chance.

We made a good team, settling straight into peeling off the loose exterior bark then thinning down the ends ready for folding. Steve then started making a length of bark rope while I tidied up the sheet, prepared the fire and got things ready for the next stage, heating and folding the ends. All the while people came and went observing our progress, taking photos, asking questions, admiring the colour of the bark and eager to see how a fact sheet could become a canoe. 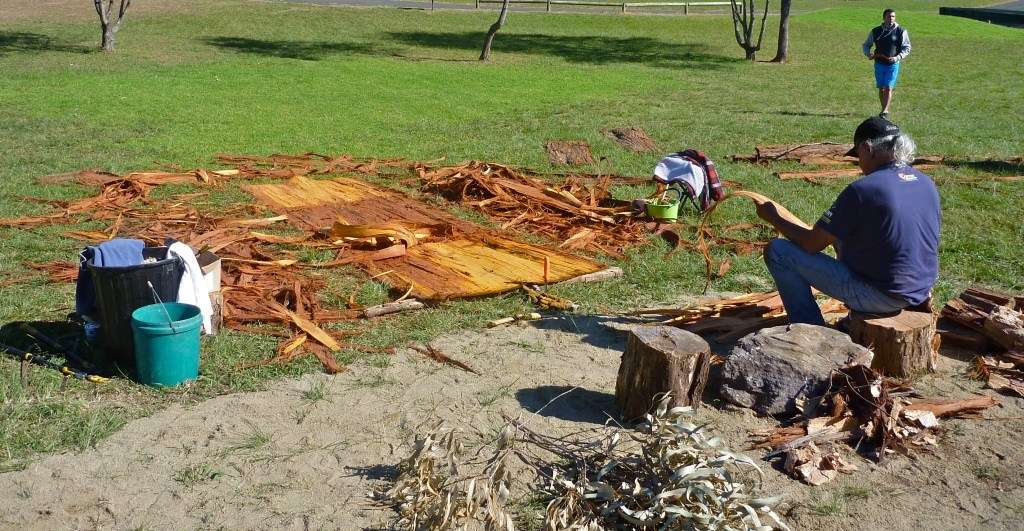 Steve making rope while the bark is being thinned down at the ends. ANMM image by David Payne

After 15 minutes heating on the fire it was time to fold an end. Our first end was a beauty, we worked the folds in from each side to the middle, they had a perfect alignment so Steve held them together while I secured the rope lasso and tightened it up squeezing the creases together, then we wrapped a long strand of twisted bark around to tie it off. We then turned the sheet around and went straight onto heating the other end, and same thing, the first go at folding was fine, so we secured that, and called it lunchtime. 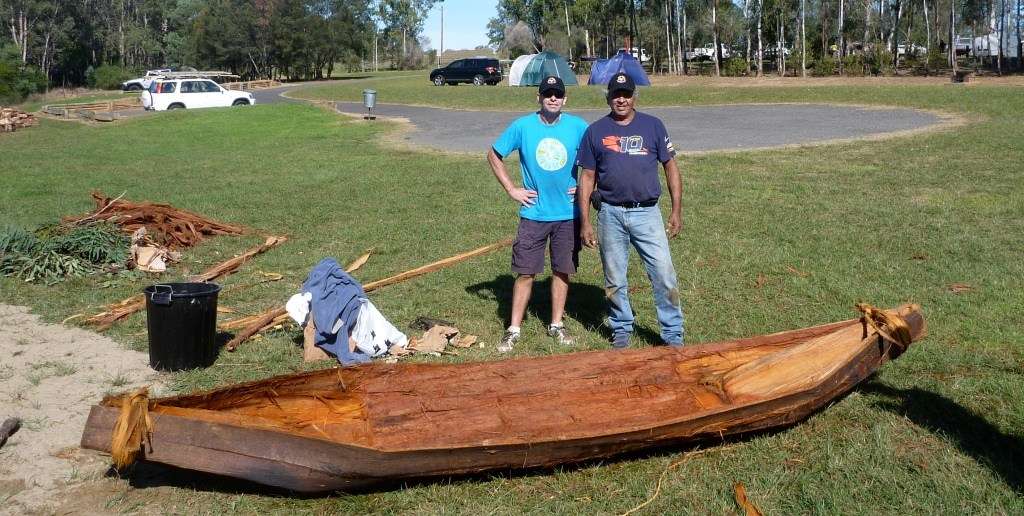 After lunch Steve went onto running a class on spear making, and I went back and worked through the finishing details. Two pegs were put through to skewer the folds and stop the ties slipping off, then two beams were pushed in against cross ties, one made from Steven’s rope, the other a twisted strand of bark. I then put the canoe over the fire to dry it out a bit, and tided up the great pile of loose bark and tools.

People were impressed, we had a big, 4 metre long canoe with a really good shape and nice rising ends too. There were some cracks, things Dean and I can fix down the track, and no one seemed too fussed by that, it just looked so well. That night it was in the foreground at the Welcome to Country and Smoking Ceremony. 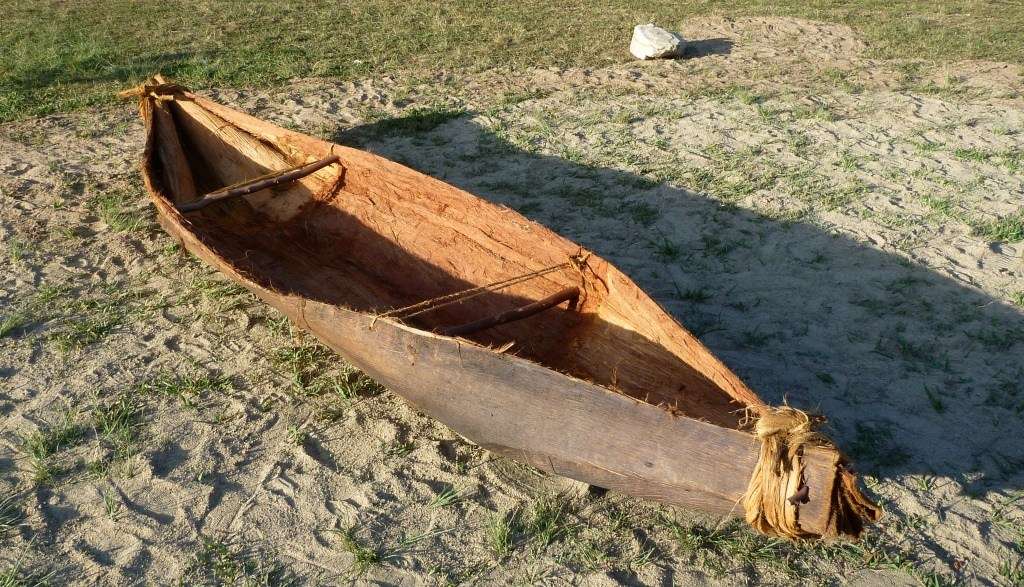 This was a very satisfying day, a real privilege to be included in, and a pleasure to be able to work with Steve, topped off with the opportunity to then present Dean with a large canoe, something we have talked about since 2012 when we first worked together building two canoes at Blackwattle Bay.

Keep watching the museum’s blog, there is one more sheet at the museum that we hope will be another big nawi, this time I will be working with the Indigenous students from Lawrence Hargraves School and if all goes well it might be ready during June.