There is no separating food and travel. Whether it is for enjoyment or basic necessity, where the next meal is coming from and what it will be can become all-consuming. Nowhere on the travel scene is this more evident than on cruise ships. Whole websites are now devoted to on board dining experiences. Super ships can have upwards of 13 dining options on board. You can choose to change your on board dining style or cuisine daily. Buffets are rated, desserts are discussed in online forums and celebrity chefs engaged to create enticing menus for the ultimate on-board experience. 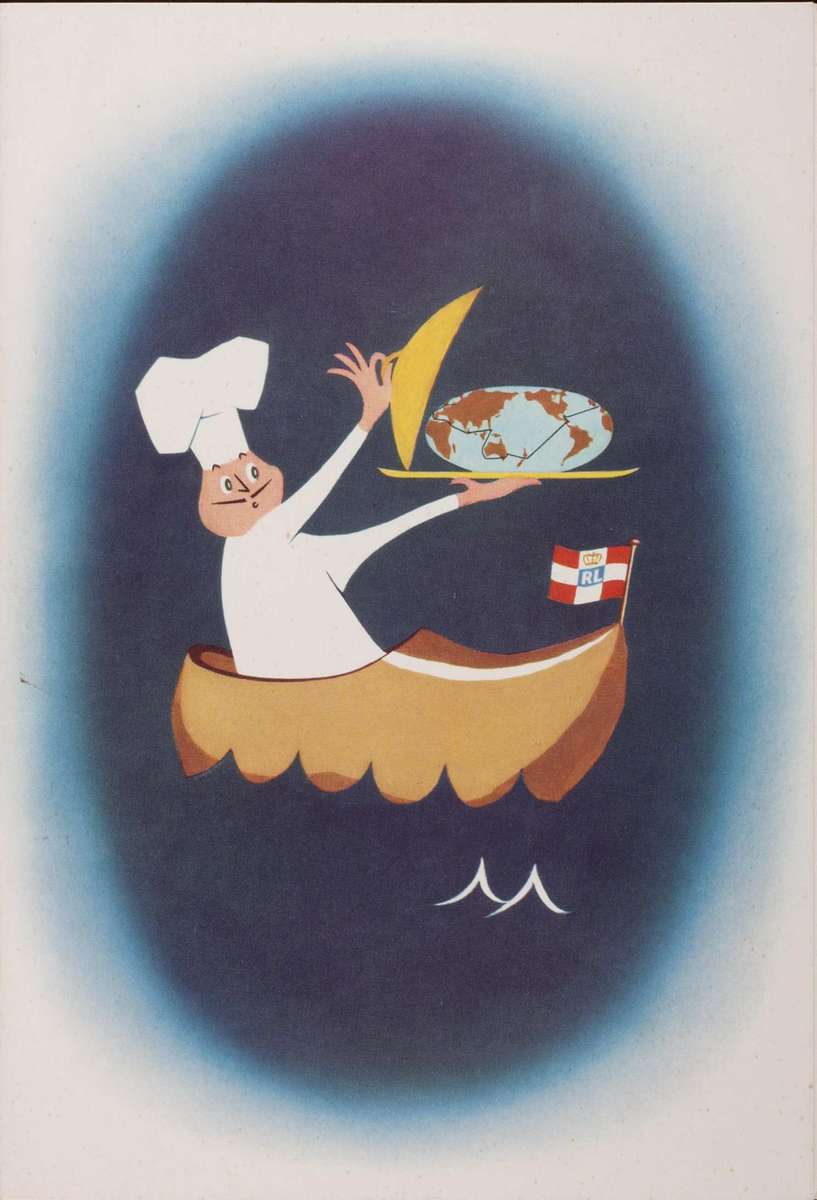 I came to think about this as I looked through the museum’s collection of ship menus. Like fashion or technology ship menus are such an accurate snapshot of the times. They took off towards the end of the 19th century as shipping lines began focusing on passenger comfort and service as much as the practicalities and speed of the journey. With long days at sea stretching out, the variety and quality of food served became paramount in attracting wealthy paying passengers. Shipping companies began to heighten the appeal of their dining experiences. In 1913 the Hamburg American Line employed master celebrity chef Georges Auguste Escoffier from the Ritz Carlton to design the dining room and menu aboard the SS Imperator. This was in addition to the eight kitchens, two head chefs and 116 assistants. 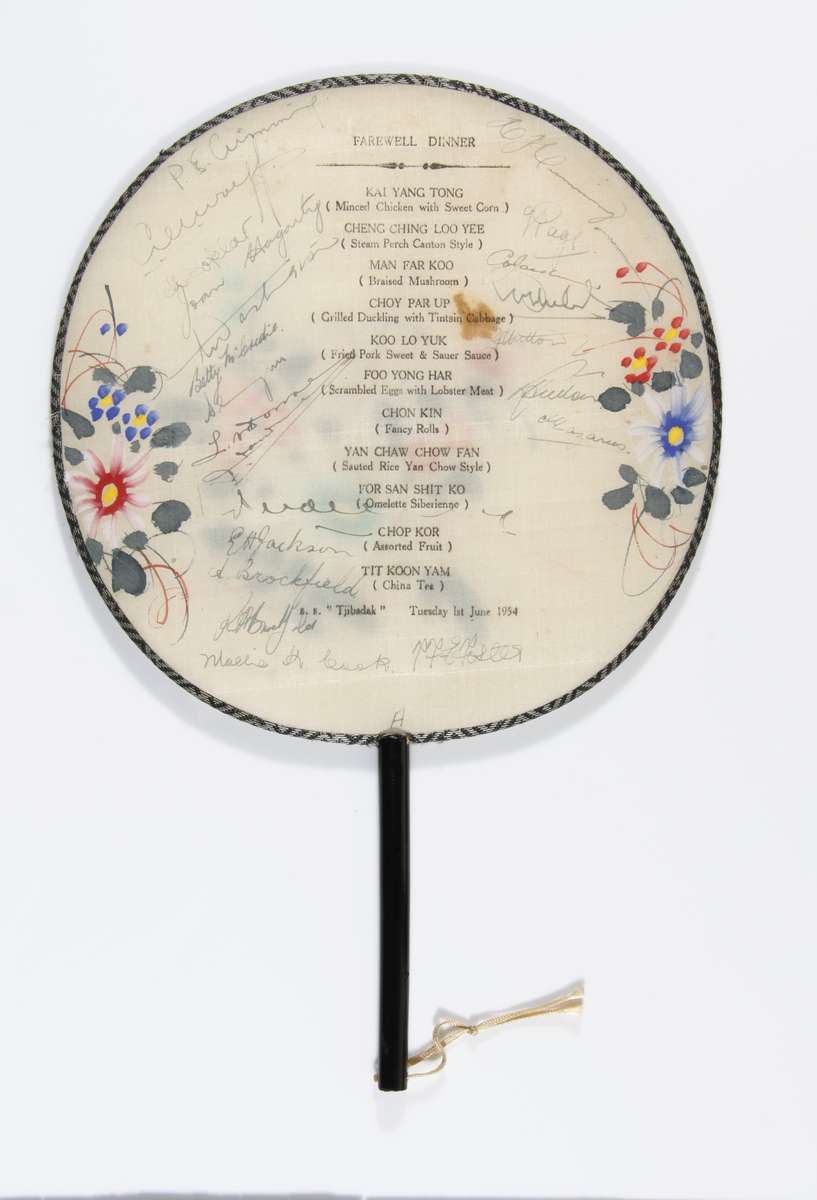 It was not just the food that was elevated. It was the whole dining experience. Meals began to include elaborately decorated menus that appeared at each sitting. In fact the menus were so attractive that passengers were encouraged to take them home as souvenirs of the voyage, an early form of marketing and public relations it seems! Contemporary artists and graphic designers were hired by shipping lines to produce images evocative of ocean voyages with leisurley days at sea and exoctic locations in mind. It’s these different artistic styles that capture each era so perfectly.

The meal choices in these menus are also a moment in history themselves. A menu from 1901 aboard the HMS Ophir offers either Pigeons a la Diable or the Bloaters Grille for breakfast. Wait a couple of decades and in 1938 you could have started your day off with such delights as Devilled Sardines or Lamb Tongues. And what self-respecting dinner from the 1960s would not offer Sweetbreads Toulouse, Waldorf Salad or Braised Venison? And in the 1970s there was no concern for on board cholesterol levels with the entrees offered in one sitting being Chicken Cream Soup, Cauliflower Cream Soup, Mushroom Cream Soup or Baked Scallops with Cream Sauce. The main course could then be the Egg Curry or Spaghetti with Ham, Mushroom and Tongue, served in a cream sauce of course.

By the 21st century ship menus continued to reflect the changing tastes and lives of passengers. In addition to elaborate meals there were now stir fry, pizza and vegetarian options available. Diners could eat by the pool, in their room, buffet style, café style or even at midnight. Yet despite this burgeoning foodscape, the menu covers from this time onwards never seem quite as creative or as evocative as those from the 1930s to 1970s. Even covers from those earlier times that appear more amusing than appealing to us today, still so accurately embody the spirit of holiday dreams that they are completely endearing.

Of all the menus in the collection it was actually a farewell dinner menu from 1938 that caught my eye, not for its cover but for the fact that it was signed by the guests. This group of five passengers had probably dined nightly together on the voyage and may have established a firm friendship on their way to Papua New Guinea. As I look at those autographs I wonder if Frederick ordered the Compote of Pigeons or the Calf’s Head? Did David play it safe and have the American Pot Roast? I am sure Allen would have ordered the Braised Pineapple Ham and maybe Nellie and Alex danced to ‘Round the Gypsy Campfire’ that was playing as part of the music programme during that final on board dinner together. 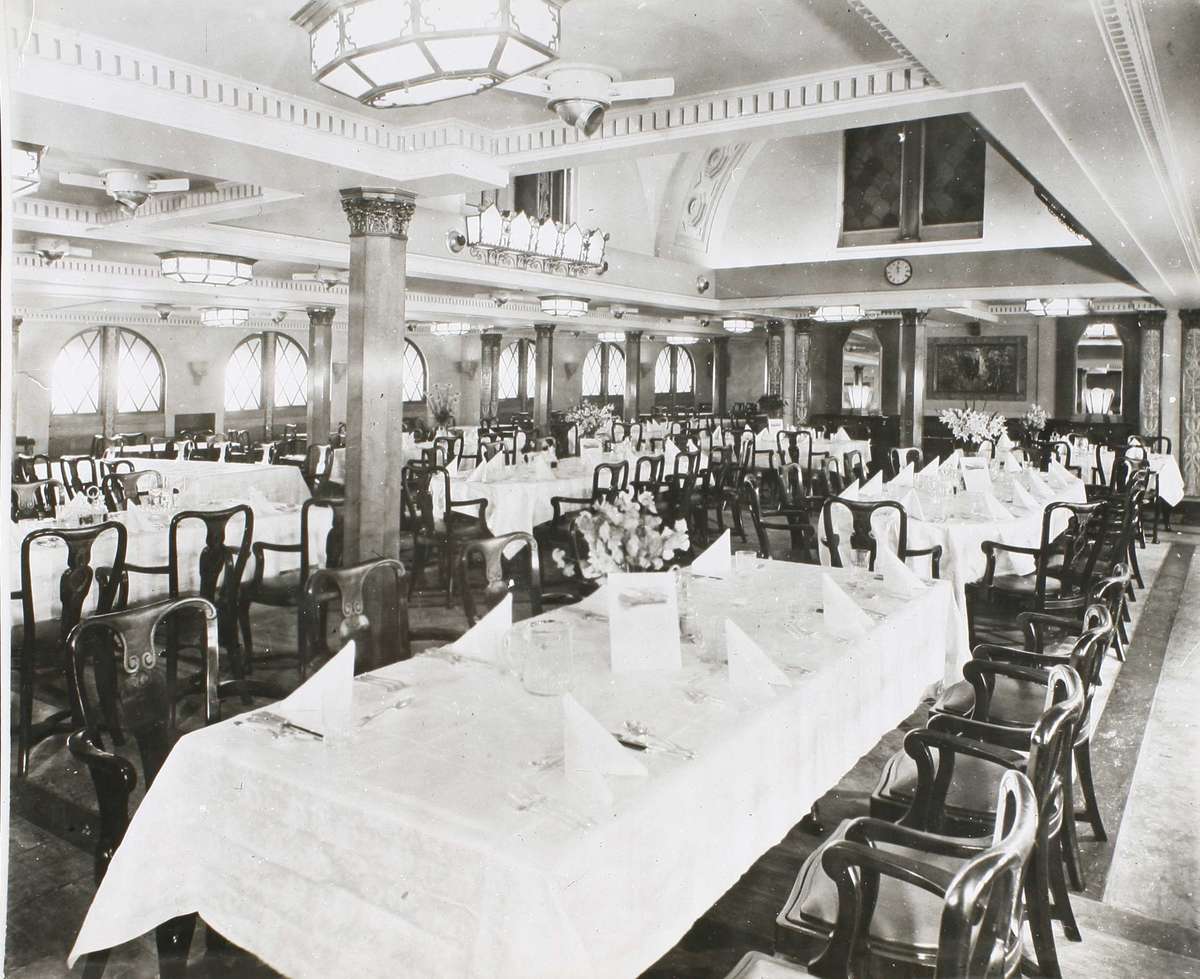 Dining in style on the Waganella, pre 1941
ANMM Collection