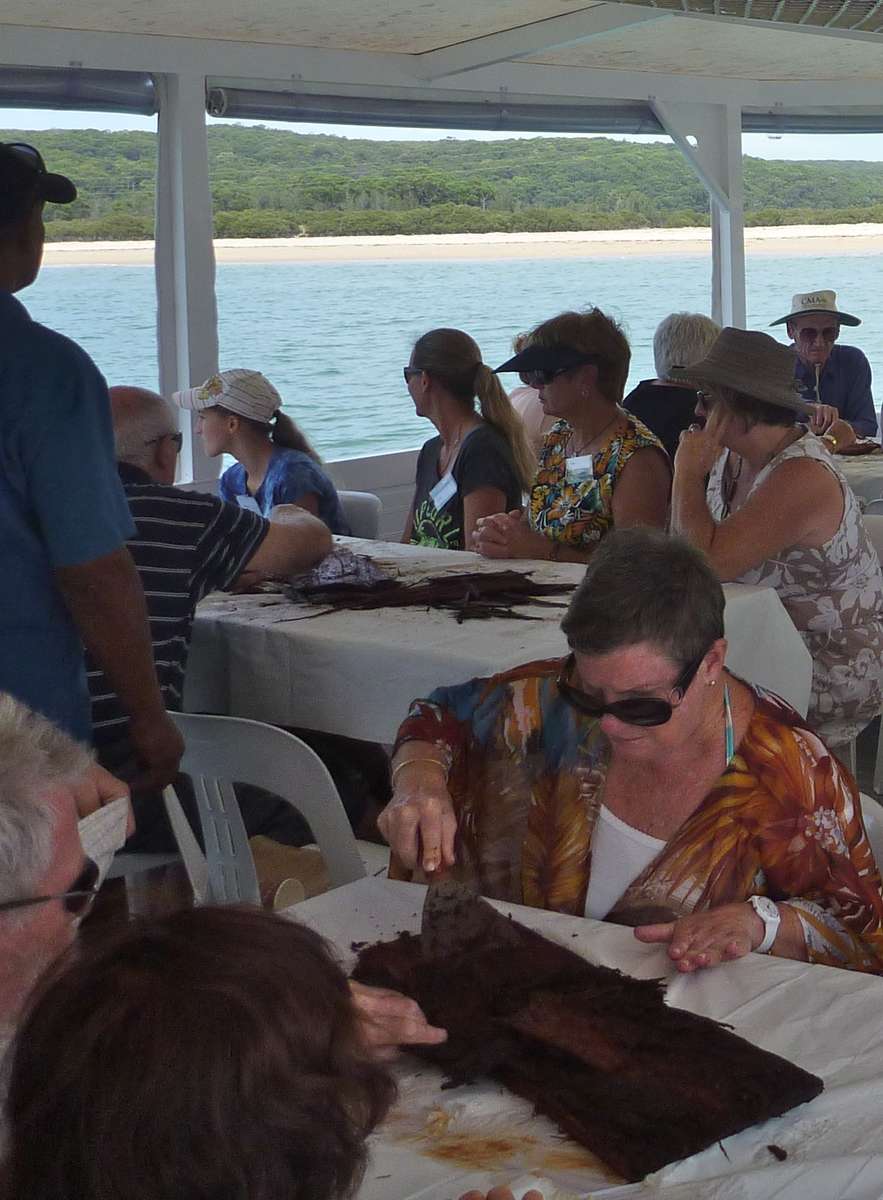 On Saturday 15th March, an eco-tour organized by Mary Jacobs from Sutherland Shire Reconciliation on the waters inshore of of Djeebahn (Jibbon, the headland at Port Hacking) was the background for a rare opportunity to learn much more than just Indigenous names, locations and history. It was a journey into another people’s country and their connections to the land, to the sea and a way of life.

Indigenous knowledge holders Uncle Les Bursill OAM and Dean Kelly guided us all respectively through location and philosophy, interspersing their observations throughout the day as we travelled on water around the bays, shoals, narrow deep-water passages and rocky points. Invited by Dean to be a third person facilitating on the day, I was able to be both a student and teacher at the same time, taking in their words whilst helping to pass on knowledge through a hands-on, practical experience. Over the course of the day Dean and I were enabling the group to build their own bark canoe models that helped connect them to the land and water Les spoke about, and to the words and their spiritual meaning from Dean.

Uncle Les began with a Welcome to Country, and gave original context to Djeebahn with Indigenous names and their meanings- beginning in an amusing way with the point of our departure Gunnamatta Bay, it means smelly mud. Other words included magura- fish, and yowie from Yowie Bay was a ‘koo-ee’ call, and while these things can be looked up, the most important part soon became the stories he shared of Indigenous living in the area, and his personal recollections of a life growing up around the water, things that you can’t find in books. 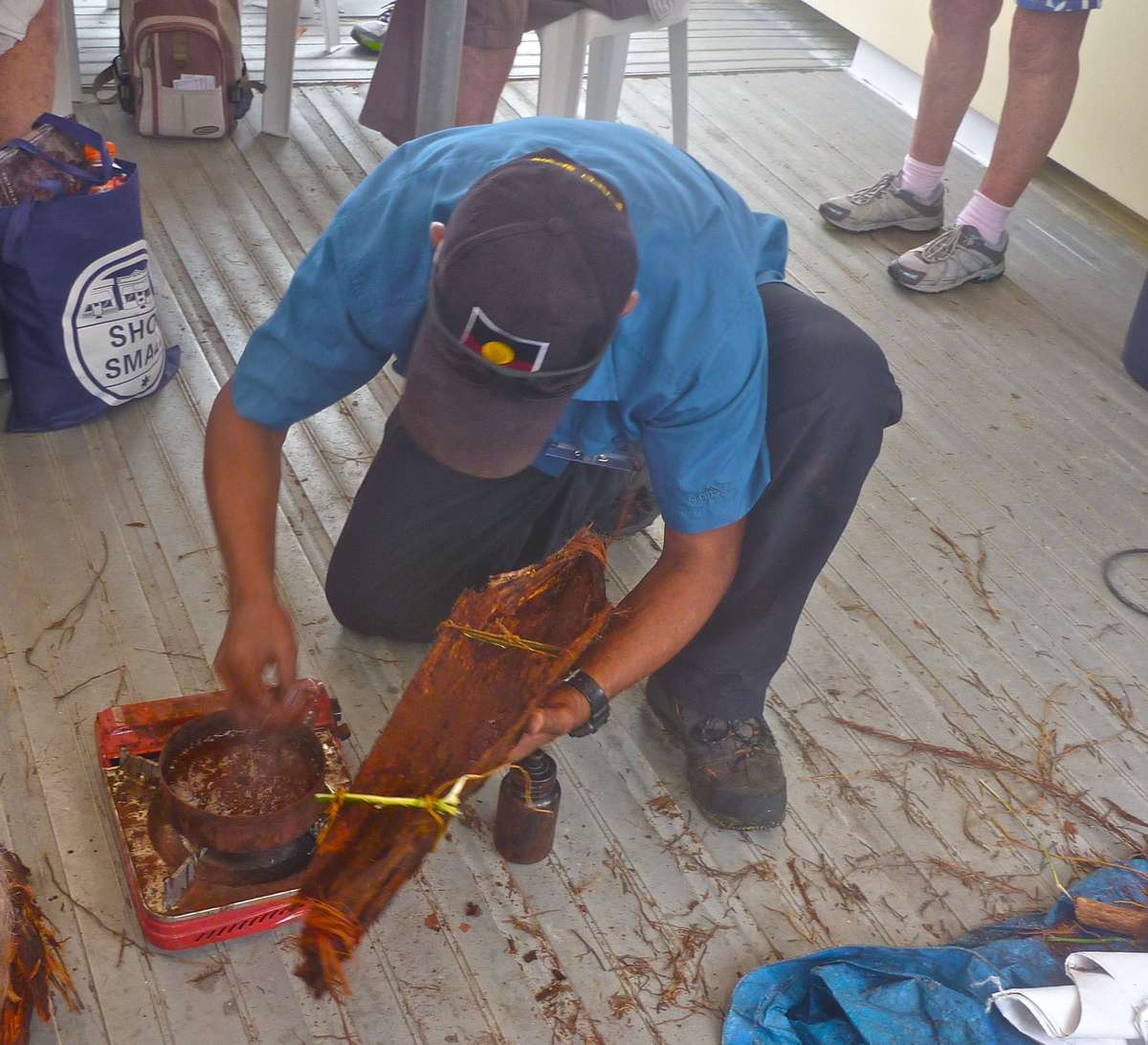 Dean went straight to this point too as he introduced his thoughts, what we would hear was not written down, and he then outlined and developed a philosophy with three aspects – Respect, Patience and Observation – and these have been guides to him.

His talk encompassed much more, he brought to life the connections to land, helped us understand where there is a life-force in things like a stone or a dead branch, and then created a challenge for us all with fire and heat – the strength of Aboriginal culture and its values had everyone captivated and involved. The enduring image is those three aspects of philosophy underlined in a simple and effective manner, three rocks that balanced on each other showing how they work together.

To introduce the bark canoes I first showed how a flat and floppy sheet of card could be manipulated with a few simple folds to become a strong and rigid canoe shape – demonstrating the simple engineering sophistication understood by the Aborigines, and what we would achieve with a flat sheet of bark. I then reminded everyone that the card was once a tree but had been processed many times, however we were going to work with bark straight from a living tree, an unprocessed material whose inner fibres that would be the outside of the canoe are some of the arteries that sustain the tree as a living organism, so our model nuwi possessed life as well. Nuwi is the Dharawal word for canoe and clearly a similar word to nawi that is used in communities to the north around Botany Bay and Sydney Harbour. They are tied bark canoes where the ends are folded and tied to create the canoe shape.

We then got stuck into the process; Once again, nothing is written down on sheets of paper- we pass it on. Dean and I moved between each group of six showing and demonstrating the various stages as they worked their sheet of bark by removing loose material, thinning the ends and the folding them to form the their model nuwi. At a stopping point ashore to look at native trees, we did some floating trials, then once underway again Dean showed how to create a strong sealant or coating from ochre, angophora gum and grass tree resin mixed in water that would seal the cracks and leaks the floating tests had revealed. The challenge he set was to ‘use the power of your mind’ and put this very hot, bubbling, deep red mixture into the canoes using your bare fingers. As I quickly discovered it can be done, and the satisfying aroma of the combined materials had us all overcoming any fears and applying the mix where it was needed- now everyone had complete and watertight nuwi models. 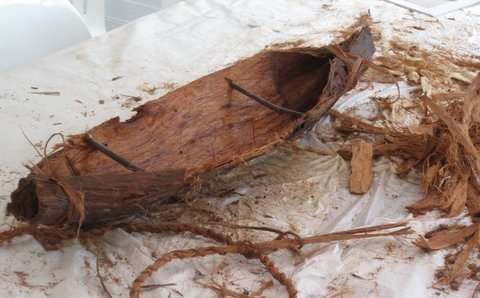 In a subtle way the nuwi canoes also helped us learn to Respect the materials we used, to be Patient with the process and to Observe what the bark wanted to do as we formed each one, and how each model had its own characteristics – connecting us to the land and reinforcing the message from our guides and their country we had just travelled through physically and spiritually.

View all posts by David Payne→
Posted in: Vessels , Indigenous
↑