Five days in Victoria and the Murray River, and I have had discussions or inspections involving an amazing variety of craft over a short period, showing once again what a diverse collection of historic craft and related people that we have in Australia. From a basic hand worked colonial log craft to the most luxurious steam yacht in the country, through paddle steamers, barges and corrugated iron dinghies then finally back to where things began in this country, Indigenous bark canoes and a community gathering.

A Maritime Museums of Australia Support Scheme (MMAPSS)  funded vessel inspection in Echuca was the initial reason for coming down to the Murray, but the Australian Register of Historic Vessels (ARHV) came aboard as well, and this combination of resources has yielded some very useful work and contacts over five days from 20 to 24 February.

Driving across from Albury I stopped at Wahgunyah, once one of the busiest inland ports when it was at the top end of the paddle steamer trade along the Murray River. Here, on a private property I was able to inspect closely one of those hidden gems of history, a real curiosity. It was a semi-circular shaped vessel made from part of a red gum log decades ago, perhaps over 100 years ago. It may have just carried a few people or some goods on the local creeks to and from the port.  The raked ends were once panelled over and only the remnants of the nails survive, it has cut outs and fastening holes that may have related to its method of use, and a sump for bailing it out.  This unusual craft been on the ARHV for two years (HV000509) but it was terrific to see it up close and confirm various details.

On to Echuca where I was going as in-kind support funded by MMAPSS for the Echuca Historical Society (EHS) to advise and report on the bow remains of the PS Murrumbidgee. These remains can inform on how the hull was constructed and modified since it was built in 1864, but they also lead into the bigger interpretation of its interesting social story as a cargo vessel, floating Chinese market garden complete with chooks, and finally an excursion boat before it was lost to a fire in 1948 and then lay submerged for many years just to the east of Echuca. In 1980 the community rallied together and brought back what they could to where it had been made, and they now plan to put a display together with this material. On the same day I also took the opportunity to inspect two barges, Alison on land and D26 floating and see another ARHV registered craft the EHS corrugated iron dinghy. 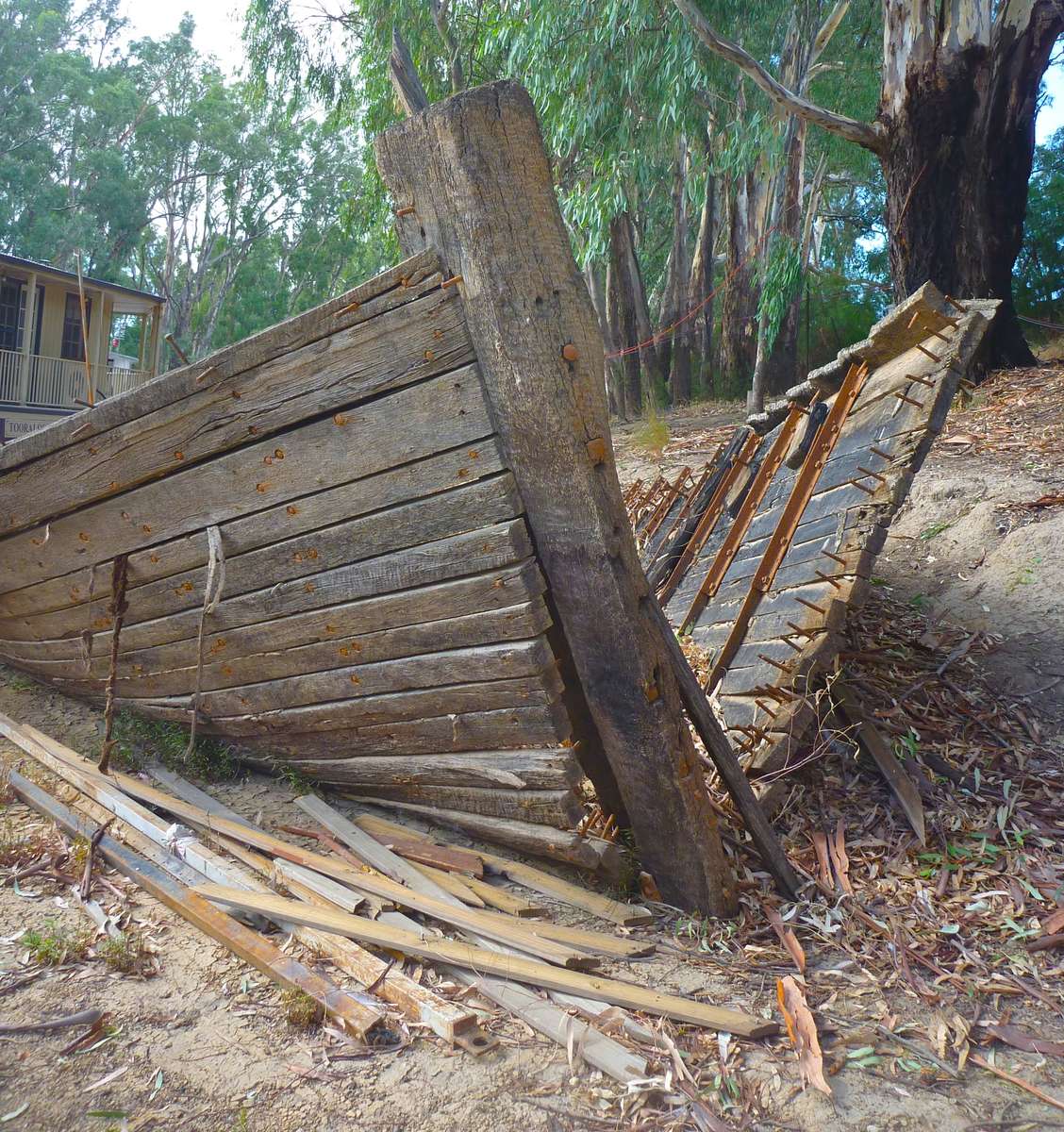 On the Saturday and Sunday I represented the museum at the Victorian Maritime Museum’s Conference (MMC), and gave a presentation on Murray River craft listed on the ARHV. There were many people to meet and talk further about their craft. One key contact was Warwick Turner, the new owner of the SY Ena, (HV000605)  a magnificent 30 metre long 1900 built steam yacht, designed by Walter Reeks and built by WM Ford in Sydney. It has been under covers for years and rarely seen, but that’s changing now, and Ena is at the museum before it steams to Melbourne, and will be on display for a few weeks in the near future. 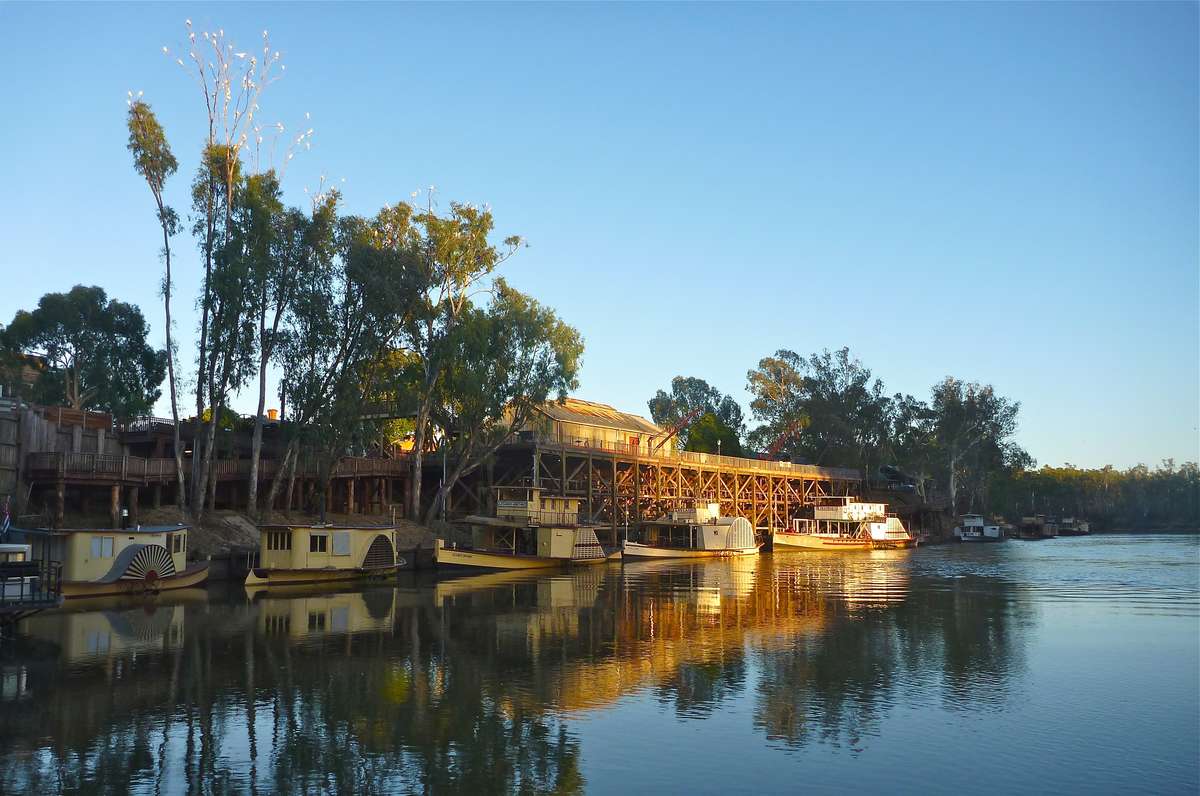 Sunrise on the Murray at the Port of Echuca wharf. Image by David Payne

In the middle of the conference we had a paddle steamer excursion aboard the PS Pevensey (HV000423), and on the way passed the PS Canberra (HVOOO170)  Back  at the National Heritage listed Port of Echuca wharf  we were tied up just behind both the PS Adelaide (HV000393) (1866) and the PS Alexander Arbuthnot (HV000422), (1923) respectively the oldest and most recently built traditional cargo and passenger paddle steamers still operating on the Murray.

On Monday I was back in Albury and Wodonga for a significant event, taking part in a gathering of regional Indigenous Elders and community members to discuss and share everyone’s different experiences and methods of bark canoe building. Richard McTernan, Aboriginal Liaison Officer with the North East Catchment Management Authority in Victoria organised the meeting, he had come to the Nawi watercraft conference in 2012 along with Uncle Wally Cooper and Uncle Richard Kennedy.  Initially I was just going to pay a return visit to three of them, then Richard began to see who else might be interested in joining in, and soon he had a regional gathering on hand. Realising the significance – a meeting of canoe builders like this may not have happened for well over a century or more – Richard organised filming and recording for future reference.

It was a lively, enthusiastic, robust and often informal series of exchanges between us all, – the scar trees and two canoes they had built recently in Wodonga were the main focus and much was said about what was learnt from the process and how more could be made. It was privilege to be involved and to learn more as well, my methods of stringybark canoe building came under scrutiny from the elders, who indicated aspects they understood that should be incorporated as well; they were keen to pass on what they knew and to help me make better canoes.

We finished over lunch with more wide-ranging talk where the strength of commitment to cultural revival was clearly evident, and it is wonderful that the museum is in a position to support and encourage this in a number of practical ways.