Myra Too, the replica of the champion 18-Foot skiff built by Billy Barnett in 1951 has been sailing for the first time early this month. The background, research and building progress have been highlighted on earlier blogs by the museum’s Digital Outreach Curator Penny Edwell.

But things have been quiet for a little while since the finished hull left boat builder Bob MacLeod’s Mona Vale shed in Spring 2013. Members of the Australian Open Skiff Trust have been diligently fitting it out while spars and sails were put together by Goldspar and Herrick Sails respectively. 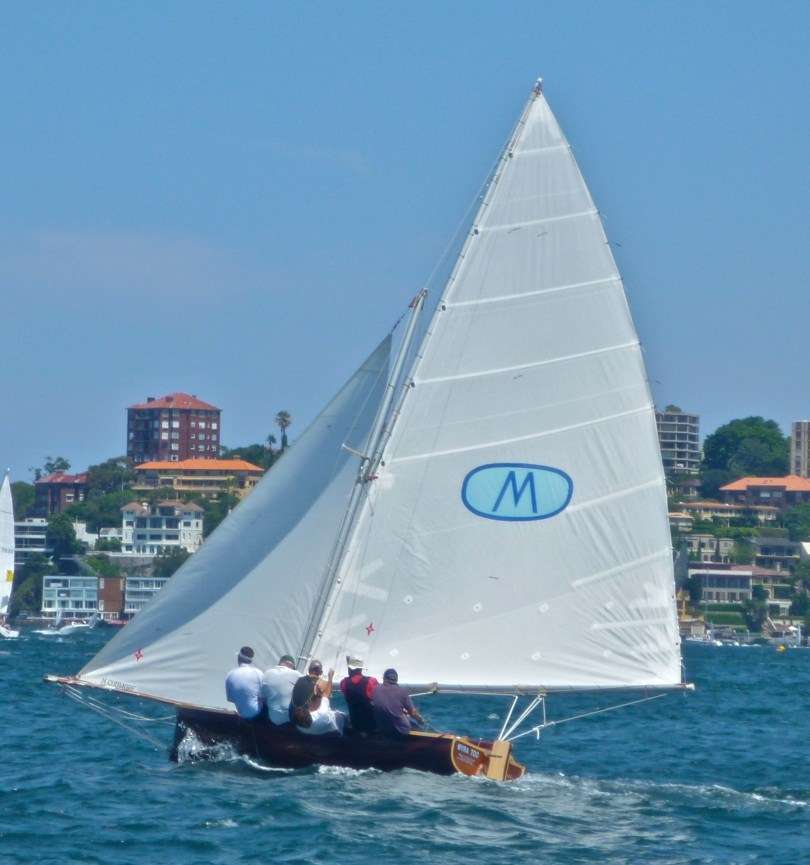 Myra Too Working to windward off Bradleys head.

Final details were completed over the Christmas and New Year’s break, and on the 4th of January Myra Too touched water at John Winning’s Vaucluse waterfront and was then towed across to the Sydney Flying Squadron where it will race when the season gets underway again. A nice east-nor-east breeze was blowing, so they put on the no. 2 mainsail, no. 3 jib, borrowed a spinnaker and ballooner, and took Myra Too for a first sail.  The test was a big success; Myra Too sat to her lines on its nice buoyant hull, felt balanced on the helm, accelerated well in the gusts and barely took any water- just how Billy Barnett said it should go. The longstanding sailing enthusiasts website Sailing Anarchy posted a report a few days later, complete with video footage, including Gopro camera images from on-board the boat, and references and links to the  museums role in helping with extensive research material for this replica project.

Last Saturday, crew and the sail making champions of the modern 18s, Andrew Buckland and Mike Carter teamed with skipper Lawson Abbott and three other crew for another trial and a closer look at how the rig could be improved. It was typical mid strength nor-east breeze and plenty of choppy water with other craft out, a good test for the racing to come. 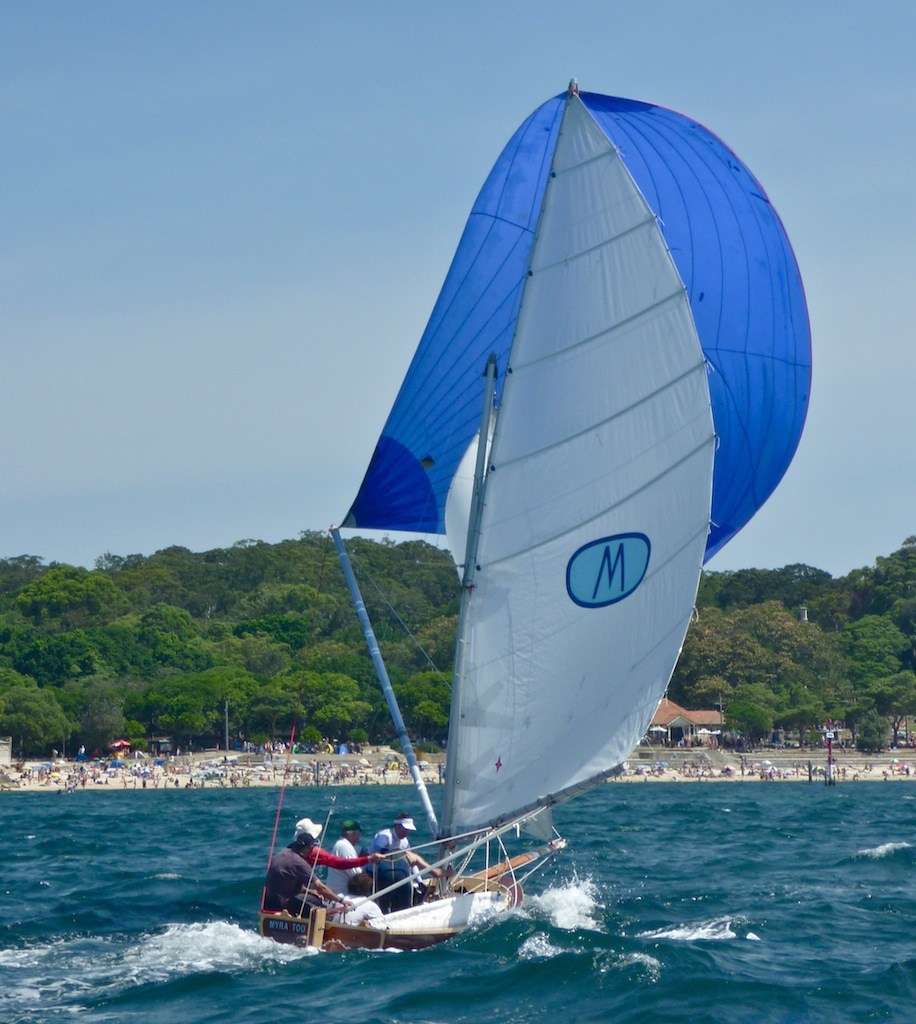 Having drawn the lines of the hull and other plans for this project, I was keen to see first-hand how it was performing, so I tagged along on the Killara II, the SFS starting boat that went out to observe the trial sail.

Myra Too was in her element as soon as they pulled on the sheets for the long work across to Shark Island.  Beating up into the rough water and lots of traffic main harbour all looked good on board- it was 15 knots or so, the crew were hanging out and looking satisfied with the set-up as they dodged the fleet of Farr 40s on one of their early season regattas. Mid harbour they rounded the Beashel Buoy just off Sow and Pigs reef, a mark she will soon be very familiar with when racing starts. Quick crew work had the spinnaker up and off she went, running square and then setting up for her first gybe, just off Neilsen Park. 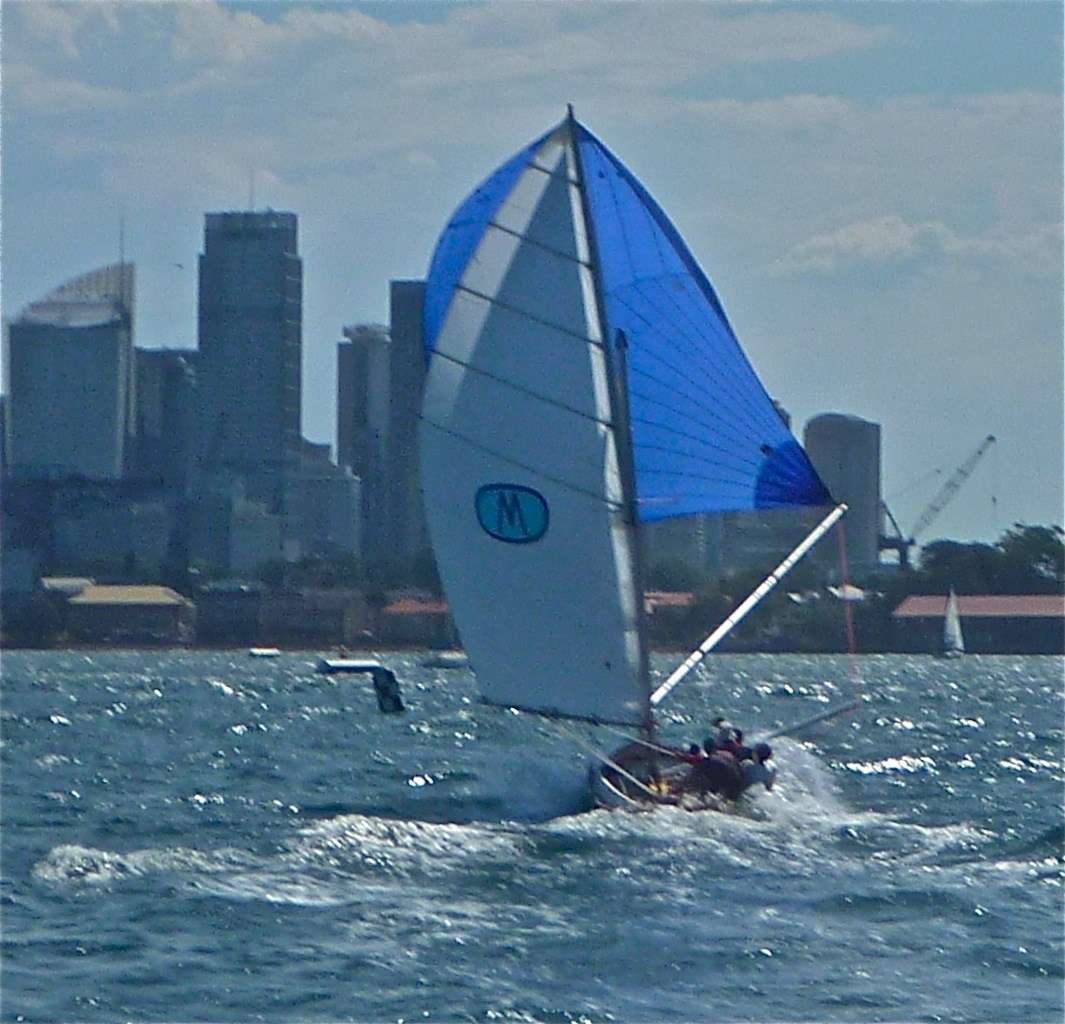 Myra Too reaching at speed and flying away from the camera boat!

Headsail down, Boom across, new brace setup,  clew through and sheeted on, headsail up and she was scooting away again as ‘Steamer’ Stanley set up the jockey pole, the signal they were going to shy up and see what she could do reaching over to Garden Island. In moments Myra Too had picked up a good gust, and was up on the plane – holding a high speed under good control consistently for some minutes until it was time to throw the sheet and drop the kite as the shoreline approached.

On return to the SFS there was plenty of praise, Lawson was once again very happy with speed, balance, trim and the relatively  dry nature of the hull shape, and said it was very controlled on the plane, and could be pressed much harder when the time comes.

The sail makers had their thoughts on getting a bit more depth into the mainsail to improve performance upwind now they know how it feels and what it can support, and that’s what  these first sails are about, getting a handle on what works, what needs improvement and bedding down the details.

Next weekend racing starts again and Myra Too will be helmed in its first race by Champion Irish yachtsman Harold Cudmore, who has sailed many times on the historic 18s and has kindly sponsored the cost of the headsails on Myra Too.  With Seabreeze currently predicting a fresh Nor-Easter, it’s going to be classic Sydney summer race conditions to welcome Myra Too to the fleet