The auction of the Charlotte medal in copper this week, focuses the spotlight once again on this fascinating episode from Australia’s earliest colonial history.  Made of copper and just 47 mm in diameter, the medal bears an almost identical but necessarily abridged version of the inscription found on the much larger silver Charlotte medal purchased in 2008 by the National Maritime Museum, where it is now displayed. 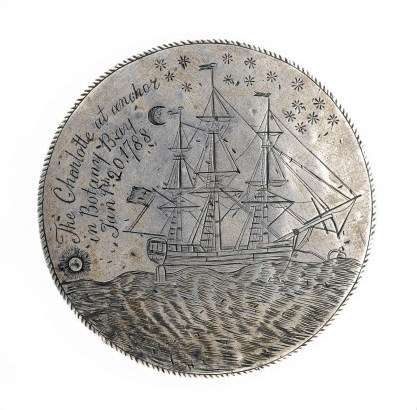 Front of the silver Charlotte Medal.

Both medals are believed to be the work of convict Thomas Barrett who was transported aboard the First Fleet ship Charlotte which arrived in Botany Bay on 20th January 1788.  A convicted thief, Barrett had come to the attention of Surgeon- General John White who also sailed aboard the Charlotte.  From the following entry in White’s journal it is clear that Barrett was an accomplished and ingenious forger capable of producing coins from materials available on board the vessel:

Still calm. This morning a boat came along side, in which were three Portugueze and six slaves, from whom we purchased some oranges, plantains, and bread.  In trafficking with these people, we discovered that one Thomas Barret, a convict, had, with great ingenuity and address, passed some quarter dollars which he, assisted by two others, had coined out of old buckles, buttons belonging to the marines, and pewter spoons, during their passage from Teneriffe.  The impression, milling, character, in a word, the whole was so inimitably executed that had their metal been a little better the fraud, I am convinced, would have passed undetected. A strict and careful search was made for the apparatus wherewith this was done, but in vain; not the smallest trace or vestige of any thing of the kind was to be found among them. How they managed this business without discovery, or how they could effect it at all, is a matter of inexpressible surprise to me, as they never were suffered to come near a fire and a centinel was constantly placed over their apartments. Besides, hardly ten minutes ever elapsed, without an officer of some degree or other going down among them.  The adroitness, therefore, with which they must have managed, in order to complete a business that required so complicated a process, gave me a high opinion of their ingenuity, cunning, caution, and address; and I could not help wishing that these qualities had been employed to more laudable purposes.

[Journal of a voyage to New South wales, John White Surgeon-General to the First Fleet and the Settlement at Port Jackson] 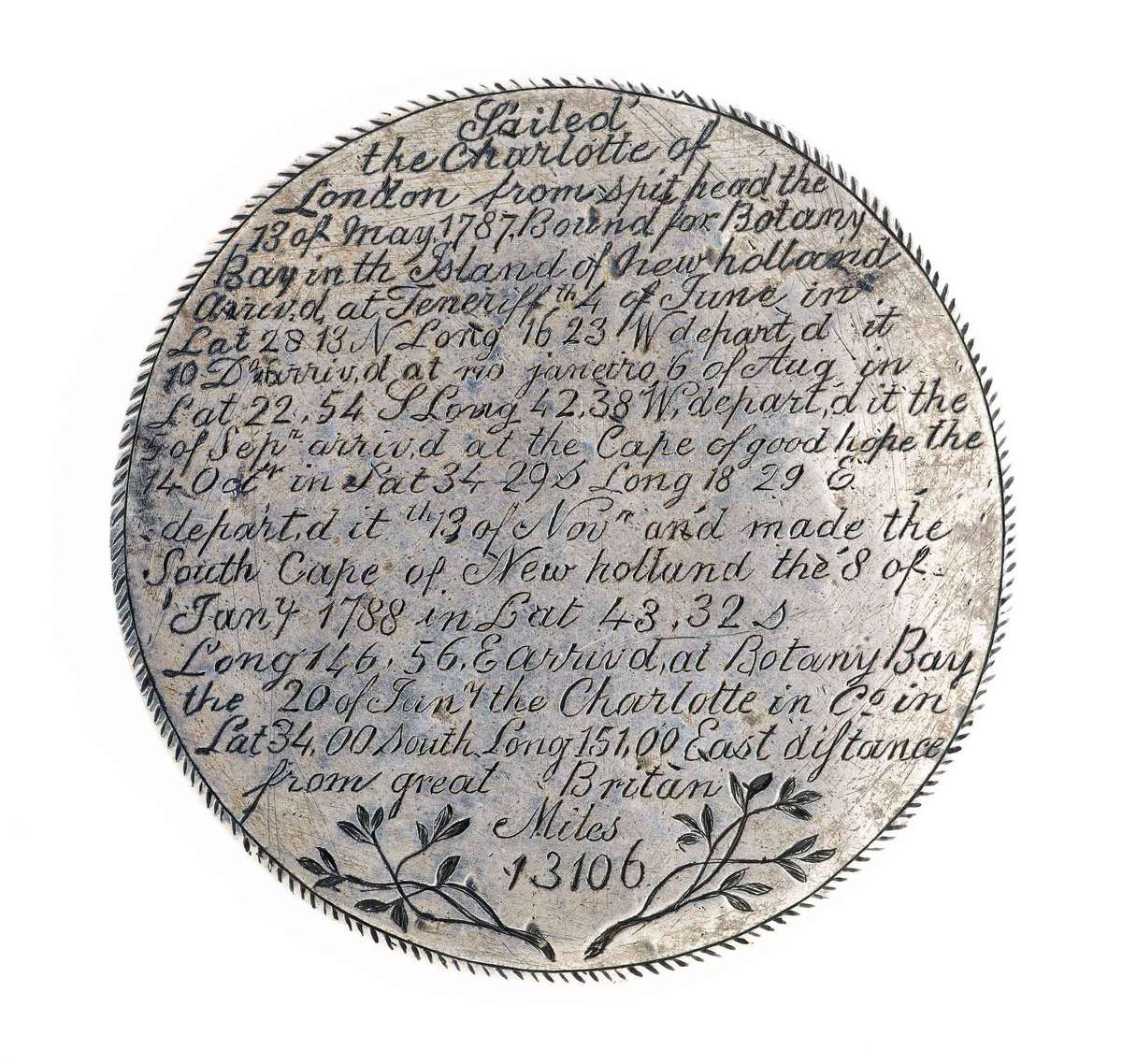 Front of the silver Charlotte Medal.

The silver Charlotte medal is thought to have been made from a surgical dish – perhaps supplied by Surgeon White to create a memento of the arrival of the First Fleet in Botany Bay. Inspection of the copper Charlotte medal reveals it is made from thin copper around 1 mm thick.  This thickness equates very closely to the heaviest grade of copper sheathing used in Royal Navy shipyards at that time.  Three weights – 32 ounce/ square foot; 28 ounce /square foot and 22 ounce/square foot were used to sheath the underwater hull of ships.  Copper is highly toxic to barnacles and other aquatic organisms which, if allowed to grow, reduce the speed and affect a vessel’s manoeuvrability.  Weed and barnacles grow especially well in warm tropical waters and like the Royal Navy, ships employed by the East India Company trading to and from Asia were frequently copper sheathed.

A relatively new ship, the Charlotte was one of three First Fleet ships contracted by the East India Company to sail to China after leaving Sydney, to purchase valuable cargoes of tea for the return voyage to England.  Enroute the Charlotte’s captain Thomas Gilbert ‘discovered’ and named the Gilbert Islands [now the Republic of Kiribati].

And how did the Charlotte get its name? From the German Princess Charlotte von Mecklenburg – Strelitz who marriage to King George III in 1761 made the name fashionable in England.  Captain Cook named Queen Charlotte Sound in the South Island of New Zealand in honour of the Queen and the town of Charlotte in North Carolina was similarly named in her honour.

The stunning silver Charlotte medal can be seen on display at the National Maritime Museum in Sydney’s Darling Harbour.

View all posts by Nigel Erskine→
Posted in: From the collection , History and Colonisation
↑