The Sydney Harbour Bridge.  It’s one of Sydney’s most famous examples of civil engineering heritage, and a major feature of the Harbour’s maritime landscape. Thousands of commuters use it each day passing under the span by ferry or across the top by car, bus, train, and bicycle or on foot.

Connecting two shores of our world-renowned waterway- the bridge is an immense piece of construction that has dominated everything nearby since it was completed in the early 1930s. Active in its construction with swarms of workers, cranes, parts being fabricated and swung into position, its piece-by-piece growth date-stamps many images of the period. Since the ribbon was cut it has been largely frozen in time, just rumbling along to the sound of traffic and trains. More recently it has sparked into action- becoming the framework for fireworks, an outdoor setting for picnics, a track for fun runs and marathons, even a big sightseeing platform. Those are the big occasions; meanwhile everyday activity happens around it, constantly – so let’s take a walk across at dawn last May to capture one short period.

The Bridge under construction in 1930, the first piece of the deck is hung in place. Photographer Samuel J Hood. ANMM Collection

Climbing the steps from the northern side the relative peace of Kirribilli is quickly replaced with the constant noise and vibration of traffic and trains.  On the eastern, pedestrian side of the bridge the early birds are up-  forming a steady stream and mostly going south,  backpacks filled with the work attire, along with the occasional clotheshorse sporting pressed shirts and suit hanging on behind.  There are plenty of joggers – many are going to and fro using one or other end as a turning point.  There is nothing very social in the way of talk yet, just the occasional tourist couple grabbing an early leg stretch. Meanwhile always present on the southern approach is the keen photographer, digital SLR and tripod included- looking for their unique image of sunrise over the Opera House.

Looking down onto the water the ferries seem to have the harbour to themselves, the inevitable cruise ship has already snuck in before sunrise and secured its place at Circular Quay.  Coming and going from their wharves, the ferries glide in or fan out under and away from the bridge. The bridge forms a dividing line for east and west, and a locating beacon visible from many sites around the harbour. 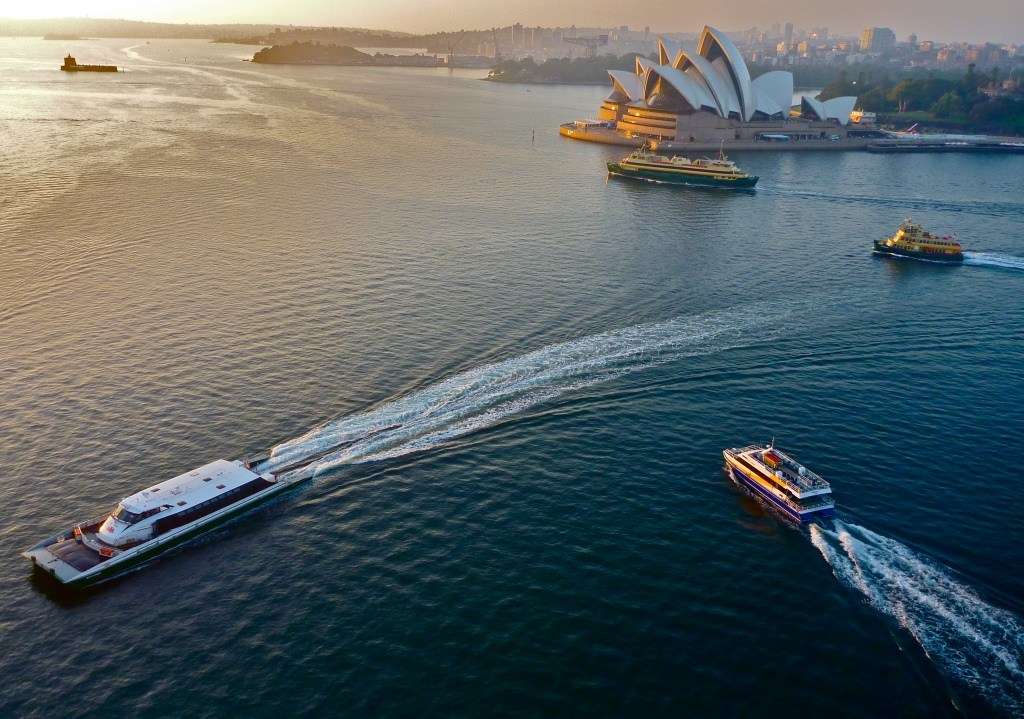 Quite often the dawn is still and the big panorama unfolding from the east of the bridge’s deck is a spread of easy movement on flat water. Early morning golden colours hang briefly off the city features, the wake of a ferry ambles across to the shoreline unhindered, and even the fast cats look untroubled, carving their way smoothly without an agitated thought toward their timetable -a calm beginning as the day gathers momentum.

View all posts by David Payne→
Posted in: Arts and Culture