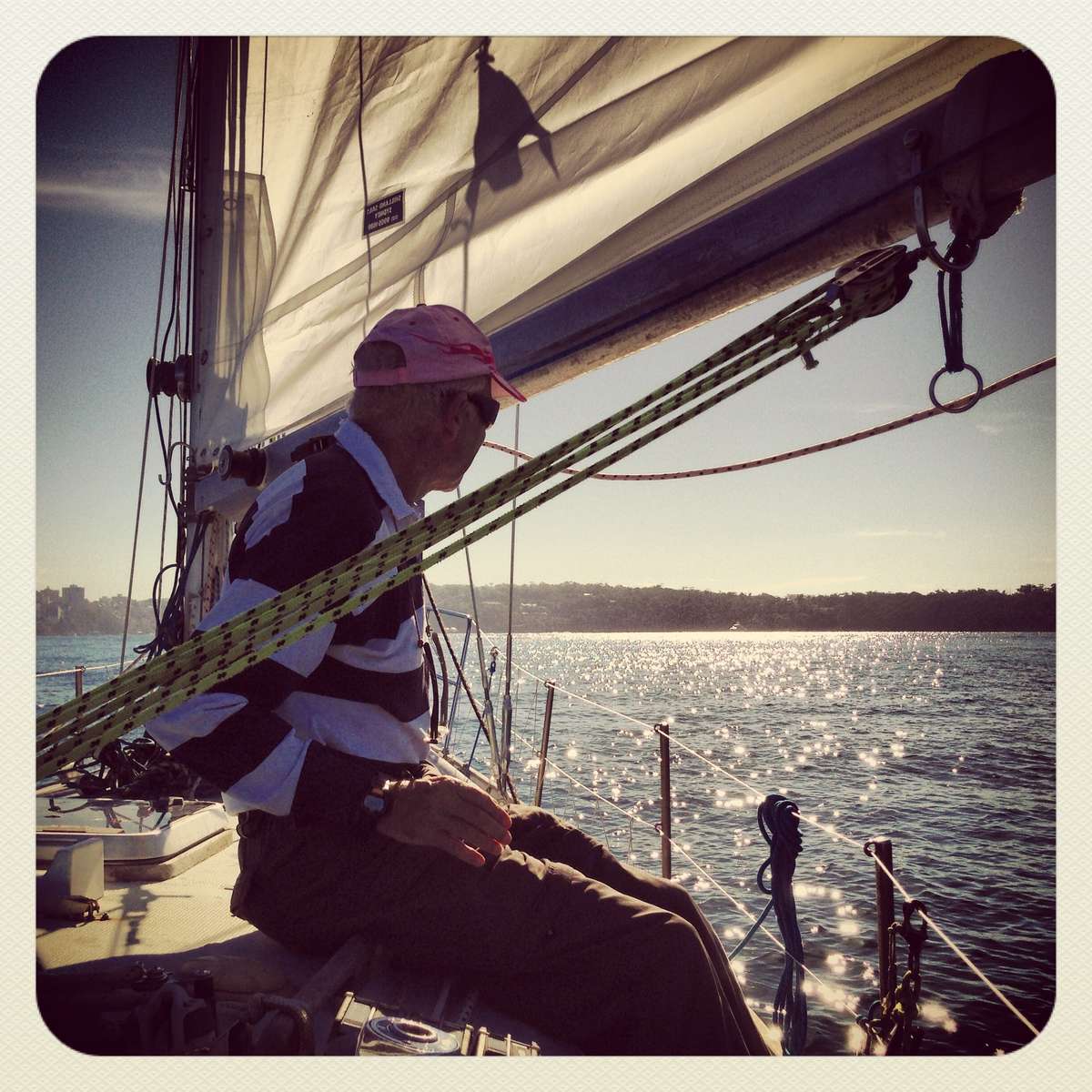 It was a warm evening at the Courthouse Hotel in the Sydney suburb of Newtown where, by sheer coincidence, I met Eleanor Whitworth. We were “drinking about museums” when she bashfully explained a family joke about how her Dad’s underwear is held at the Australian National Maritime Museum, and they’d chuckle about it every time they passed by the museum.* Perplexed and somewhat embarrassed, I realised this was yet another part of the collection I was yet to stumble across. This is where her father comes into the story. Meet sailor, adventurer and lover of all things Hitchhikers Guide to the Galaxy – Alex Whitworth.

When Alex was seven years old, his father gave him a copy of Joshua Slocum’s 1899 classic, Sailing Alone Around the World. He would have read the first few sentences of the account, describing the moment Slocum commenced his round-the-world voyage aboard Spray in 1895:

A thrilling pulse beat high in me. My step was light on deck in the crisp air. I felt there could be no turning back, and that I was engaging in an adventure the meaning of which I thoroughly understood.

Slocum became the first person to circumnavigate the globe alone. I think his description of leaving port is timeless, it could ring true for anyone about to attempt such a challenging task. Young Alex would have read on about Slocum’s many adventures, of the perilous seas and close encounters with tribesmen in the Tierra del Fuego, South America and pirates off Gibraltar. This sparked a fascination with circumnavigation; however it wasn’t until years later, when Alex sailed his first Sydney-Hobart yacht race in 1977, that he gave the idea more consideration. He had long considered the prospect of rounding the notorious Cape Horn as both an inspiring and terrifying challenge. Enter the boat that changed it all.

In 1993, Alex purchased a Brolga 33 and named it Berrimilla II, Berri for short (the first Berrimilla was stolen from its moorings in the late 1980s). A quote on Alex’s website notes:

Berrimilla was designed in 1965 and is a dinosaur compared to modern boats. She has a displacement hull shape and is heavy and slow but very strong and seaworthy. Alex bought her believing that she could be sailed almost anywhere with the right preparation and crew.

Alex sailed Berri for the next 16 Sydney-Hobart races, including the horror 1998 race where they took first place on Handicap in the PHS Division. For this race, Alex was joined by Peter Crozier and together they faced 80-knot winds and mountainous seas. It was the most disastrous Sydney-Hobart race in history and resulted in the loss of six lives and five yachts. The emergency air/sea operation rescued 55 sailors and 71 of the 115 yachts failed to finish.

In 2005, after completing the 2004 Sydney-Hobart race, Alex and Peter kept sailing in their first attempt to circumnavigate the globe. It was a voyage of interesting parallels and connections and included everything from the everyday to the extraordinary. After an unscheduled stop in Dunedin, New Zealand, they sailed to Cape Horn and Port Stanley in the Falkland Islands. Along the way, they experienced violent tea drinking, birthday celebrations and severe knockdowns.

Berri, Alex and Peter were about halfway between New Zealand and Cape Horn when they communicated with the International Space Station (ISS) and one of the National Aeronautics and Space Administration’s (NASA) most experienced astronauts, Dr Leroy Chiao. In a 2011 interview with ANMM curator Penny Cuthbert, Alex explained: ‘There’s a point in the Southern Ocean where, if you’re in a boat, you’re probably as far away as it’s possible to be from any other human being on the planet.’ 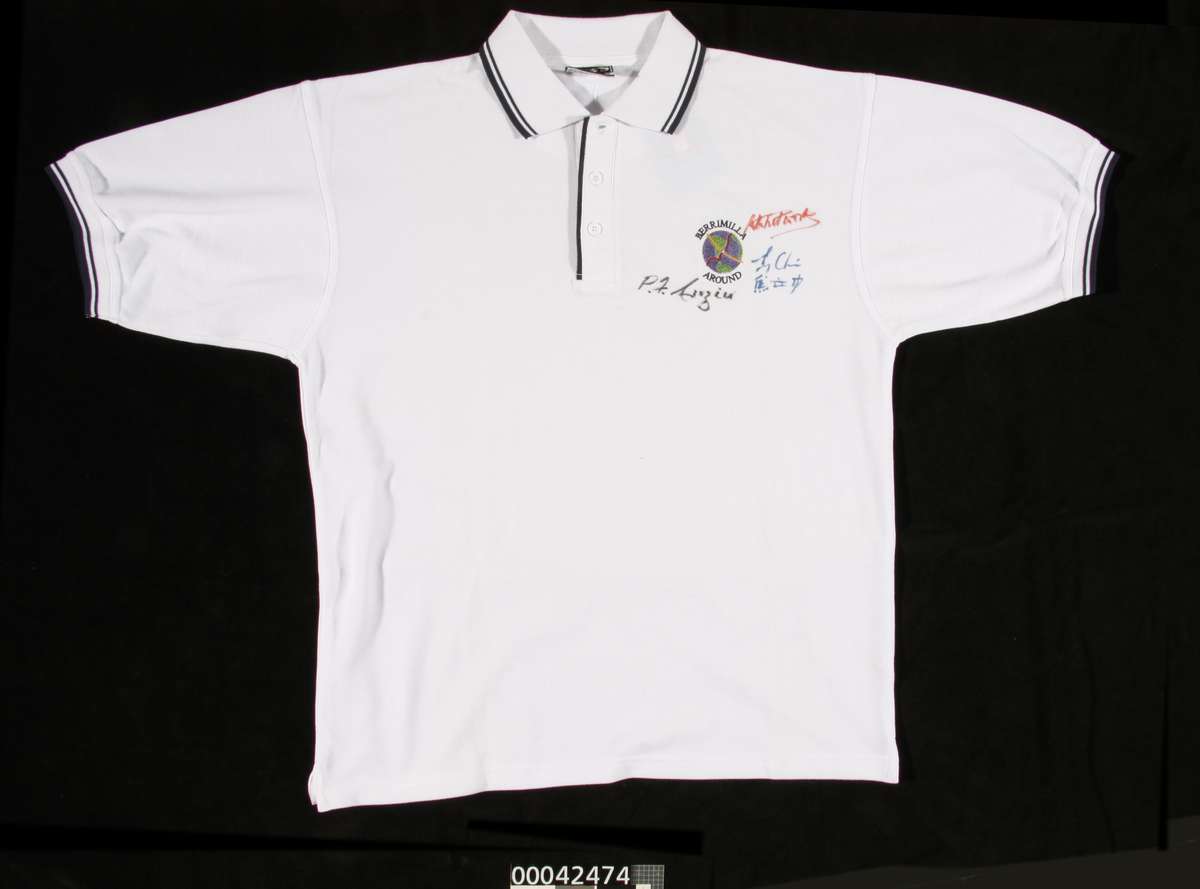 Alex realised that as the ISS orbited several times a day ‘somewhere overhead’, its crew would be ‘the nearest human beings’ to Berri. As serendipity worked its magic, ‘spacemen and sailors’ made contact via satellite phone and found various parallels in their respective journeys. There was a ‘shared isolation’ and the reality that as a crew, you ‘have to survive together’. Berri, Alex and Peter sailed to Falmouth, UK where they met Leroy Chiao and competed in the 2005 Fastnet race finishing in 11th place. They sailed on home to Australia via the Cape of Good Hope, completing their voyage in time to start the next Sydney-Hobart race.

In 2006, Chiao became a Professor at Louisiana State University and invited Alex and Peter to a Risk and Exploration Symposium. After the symposium, Alex and Peter spoke with Dr Pascal Lee, who invited them to rendezvous with his Haughton-Mars Project team for the total eclipse on 1 August 2008. He drew a map in Alex’s notebook which became the inspiration for the second circumnavigation.

Accordingly, on 10 April 2008, Berri embarked on its second circumnavigation, this time via the Northwest Passage. Unfortunately Peter was unable to join the second voyage, so Berri and Alex sailed with Corrie McQueen and, later in the voyage, Kimbra Lindus. Berri and the crew sailed from Sydney to Alaska before they navigated the treacherous Northwest Passage. Northeast of Point Barrow in Alaska, Alex described what the conditions were like: ‘It was really scary stuff … it was foggy … we couldn’t see more than 20-30 metres around the boat, and white ice disappears into fog.’ Over about 31 days and a bit over 3,000 miles, they navigated their way through the Arctic route and at one point Berri was lifted out of the water at the stern by a whale! 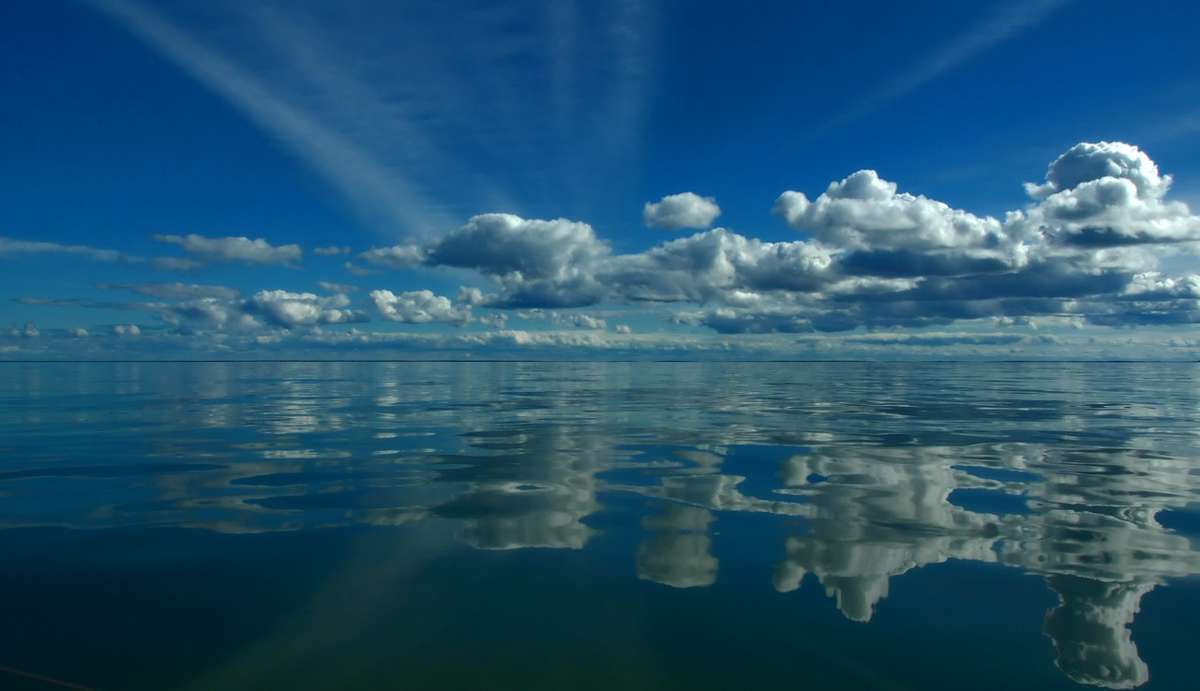 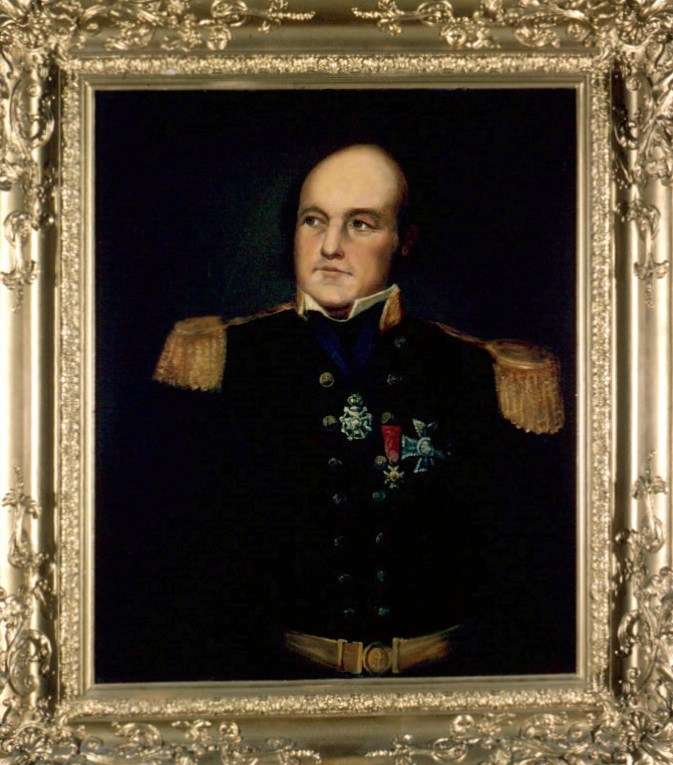 Alex also spoke of the ‘eerie’ experience going through the graveyard of Sir John Franklin’s lost expedition. In 1845, Franklin along with 128 crew members were lost after HM Ships Terror and Erebus became icebound in Victoria Strait near King William Island, Canada. Search parties and expeditions conducted after the event gradually unveiled the truth of what happened to Franklin and his men. Their story calls to mind a piece of sheet music from the museum’s collection, ‘He sleeps but not ‘mid the Arctic snow’ (1867), composed as a tribute to the American explorer Elisha Kane. Kane was a member of the 1853 Grinnell Expedition which was sent to find out what happened to Franklin. The lyrics of the song contain an unsettling dichotomy when one considers the differing experiences of the two expedition leaders. Kane’s epic tale of survival contrasts with Franklin’s tragic end especially in the following excerpt:

In understanding the importance of time and place, as a fellow expedition leader Alex clearly felt a connection with the past. It’s no wonder that after facing freezing conditions and meeting ‘ghosts’ of the past, Alex felt ‘waves of relief’ wash over him as they sailed into Falmouth on 20 September. Another Fastnet race and the crew set sail for Australia again this time via Lisbon, Cape Town and the Kerguelen Islands.

Sailing on board Berri myself, it’s not too difficult to imagine what motivates Alex. Back in 2011, he jokingly, if not humbly, said: ‘I guess a bloke like me needs projects to keep Alzheimer’s at bay.’ But I think it has more to do with the quote from Slocum about that ‘thrilling pulse’, the promise of adventure and the overall experience of being on the wide open sea. Can anyone reading this say they know what the wind sounds like during a storm out at sea? Or how your hands feel after months of gruelling use, or what’s it like to sail blind almost in complete darkness? I certainly don’t. But I can imagine now thanks to Alex generously donating items to the museum’s collection and sharing Berri’s tales. In a story of making connections, ghosts and spacemen, we can get a picture of what it’s like trying to sail your way around the world, a tiny speck on the ocean. If you find yourself in that situation, what should you do? Perhaps rather fittingly we end with the words of Douglas Adams – ‘DON’T PANIC’.

* In the interests of accuracy, the museum does not hold Alex’s underpants, it’s purely a family joke. 🙂 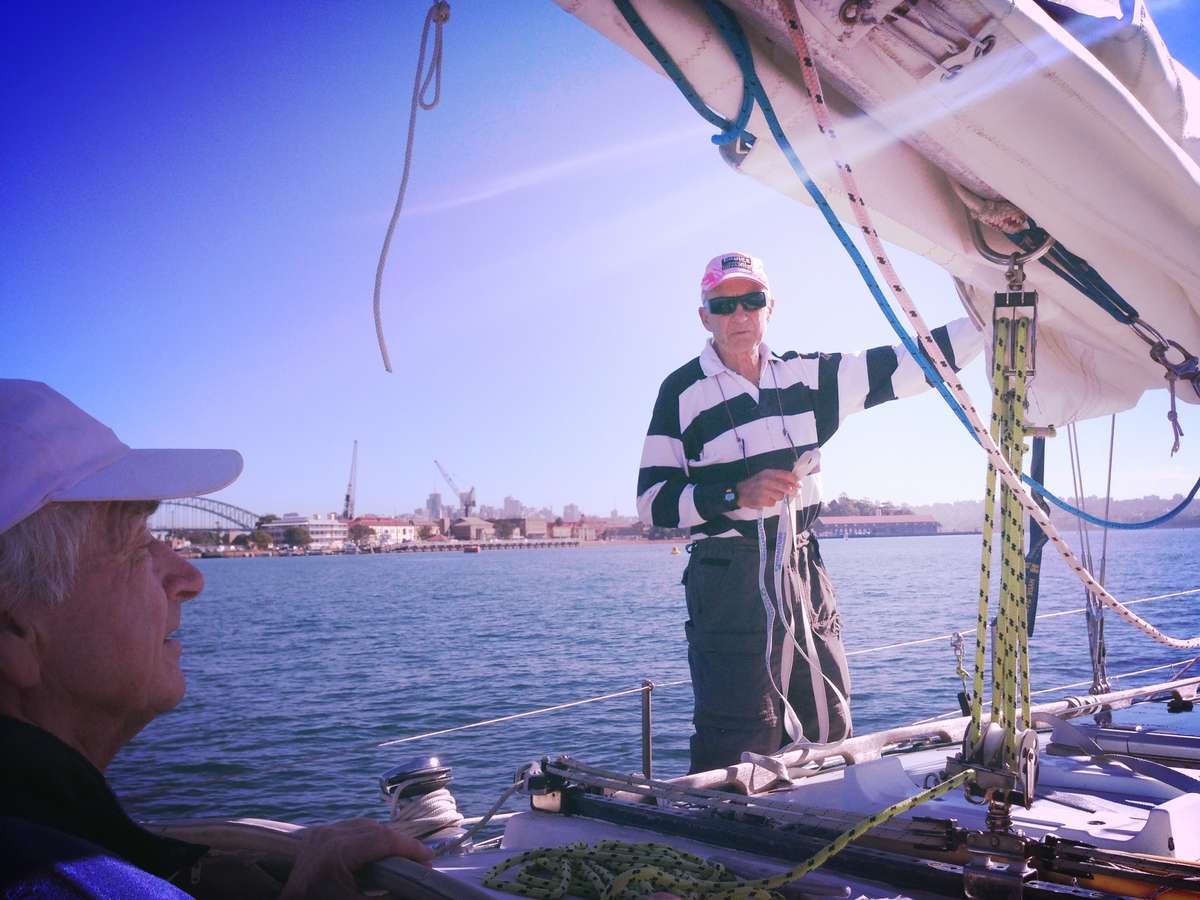 Thanks go to Alex Whitworth, Peter Crozier and Eleanor Whitworth for their time and assistance, they all had a part to play in creating this story.

‘During her two circumnavigations Berrimilla became the first and, as far as we can discover, the only vessel to: