Sometimes when it all goes pear-shaped you have to find a way to extract yourself from the situation. The gaff rigged 28 foot long Maluka and its crew got into and out of desperate circumstances late in 1935, helped a Christmas pudding, a lucky unplanned arrival onshore and their practical, bushman’s can-do resolve. 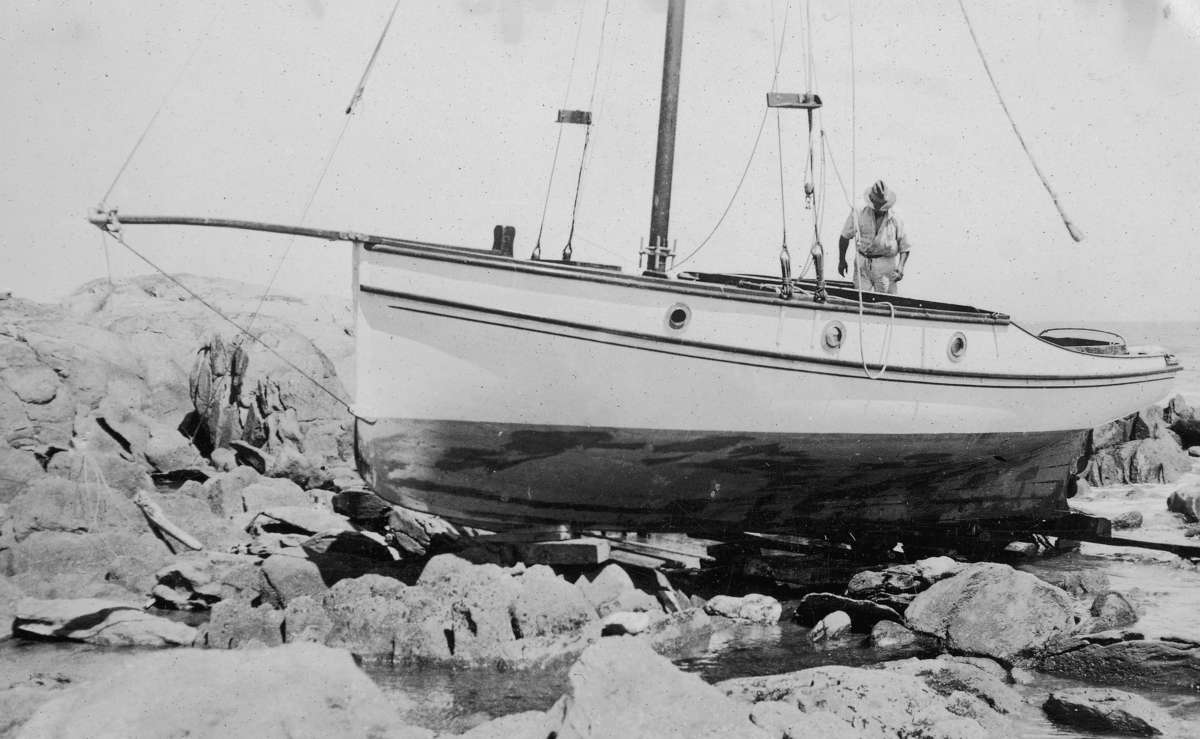 Maluka on the rocks at Cape Conran, Victoria

Maluka was built at CAM Fisher and Son’s Yard in La Perouse on Botany Bay NSW and launched late in 1932. The owners, brothers William and George Clark were bachelors, and had settled in Sydney a few years earlier after retiring from farming. Maluka was planked in Huon pine and fitted with a Lycoming auxiliary petrol engine.

The Clark brothers raced Maluka with the Sydney Amateur Sailing Club and fished offshore or around the harbour. They undertook the first of four well documented cruising voyages in April 1933 when they sailed to North Queensland, spending five months away from Sydney. It was a great success and the gale they experience very early in the voyage gave them great confidence in the seaworthiness of Maluka‘s design. This was reinforced on a subsequent voyage in September 1934 to Lord Howe Island, taking Sep Stephens as a third crew member. The boat weathered severe gales on both passages and again proved entirely capable in the open ocean.

Their third voyage ended in disaster. The three sailors left Sydney just prior to Christmas Day in 1935 and south of Eden were a caught in a southerly gale raging against a strong south moving current. The seas were huge so they hove-to for an extended period, and crew member Stephens was injured during one knock down. Unable to take any sights to confirm their position they estimated they were near Green Cape in NSW. The brothers were eventually overcome with exhaustion and lashed the tiller. With all three sheltering below, believing they were drifting well out to sea and confident the craft would look after itself and them while the gale blew its course, they ate portions of their Christmas pudding to keep themselves sustained.

Unknown to them, the current had taken them well south along the Victorian coastline and in the early hours of the morning the boat grounded on a headland at Cape Conran, near the township of Marlo. Fortune was with them; Maluka was pushed over the rocks by a series of waves then came to rest lying over to starboard, grounded with some damage to one side but clear of the pounding sea. 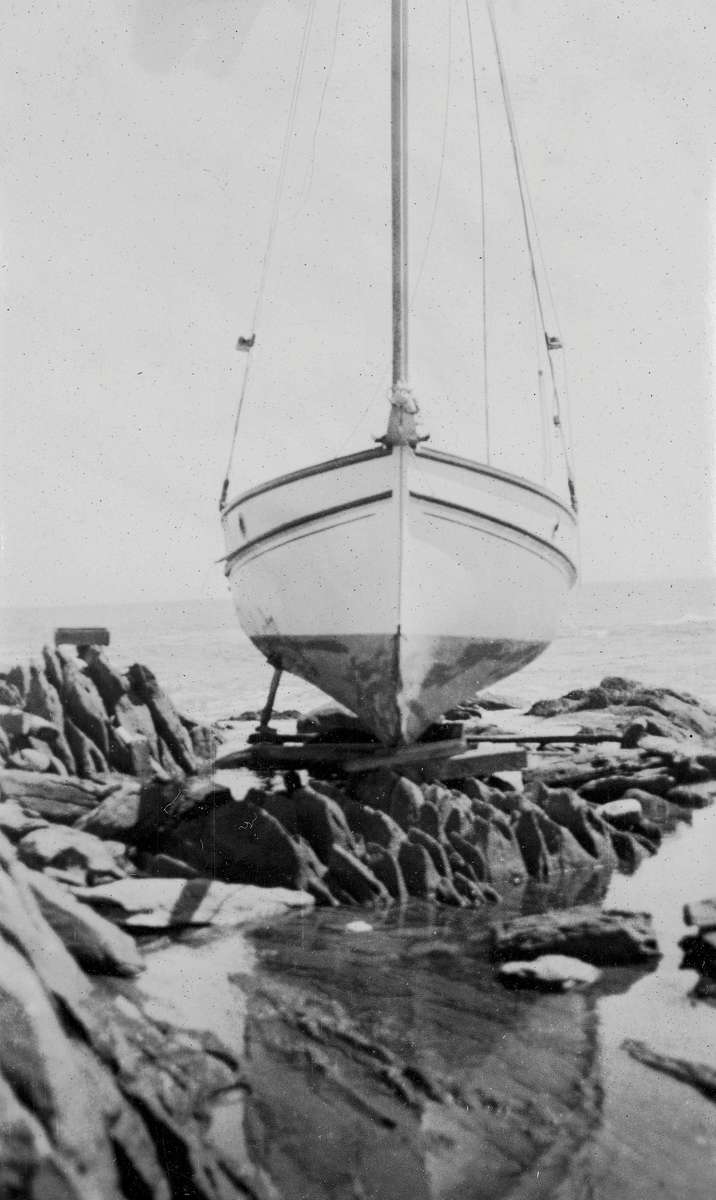 Maluka on the rocks at Cape Conran, Victoria

The first thing they did was make a cup of tea on the stove. At dawn they saw they were about 50 metres from the shore, and the Clarke’s assisted the injured Stephens off the boat and up beyond the beach line, placing him under a tree. They then set up a flying fox arrangement to ferry some extra gear ashore from the vessel. When they returned to Stephens he was in further strife, in the darkness they had unwittingly placed him adjacent to a bull ants’ nest.

Taking stock of their situation, George set out with a supply of cake, biscuits and a compass, with no real confirmation of where they were or where to go other than to follow his instincts until something turned up. He only went 400 metres before he stumbled upon help – three people, two of them brothers, who were camping on their holiday.

Stephens was then brought to the camp site while one of the campers walked 12 miles to Marlo and came back with a cart hauled by two draught horses. Stephens was taken to Marlo, and the brothers and their camping rescuers assessed how to move Maluka. The decision was taken to lighten the boat and cut off the deadwood and lead keel, work apparently made easier by the fact that the rescuers were skilled axemen.

Another walk to town secured material to fix the damaged planking on one side, and the four then spent two days gradually moving the yacht across wooden sleepers they had cut to a place where it would refloat at high tide. A week after it grounded Maluka was afloat again, and soon after welcomed into Marlo with some fanfare.

They then set about retrieving the keel and gear they had taken off, and found a skilled driver and his Ford truck willing to take the job on. It too two trips, and on the second one a number of towns folk came along as well, happy to lend a hand and be part of the rescue mission.

Over two weeks the brothers repaired the deadwood and bolted the keel on again. Departing Marlo at 4.30am to catch the high tide, Maluka was then motored and sailed back to Sydney where the yacht was properly repaired by Fisher. 12 months later Maluka successfully voyaged to Tasmania and return over Christmas and New Year.

In 2006 Maluka went south again, an entrant in the Sydney to Hobart race, complete with flares, life raft and the latest navigation technology. 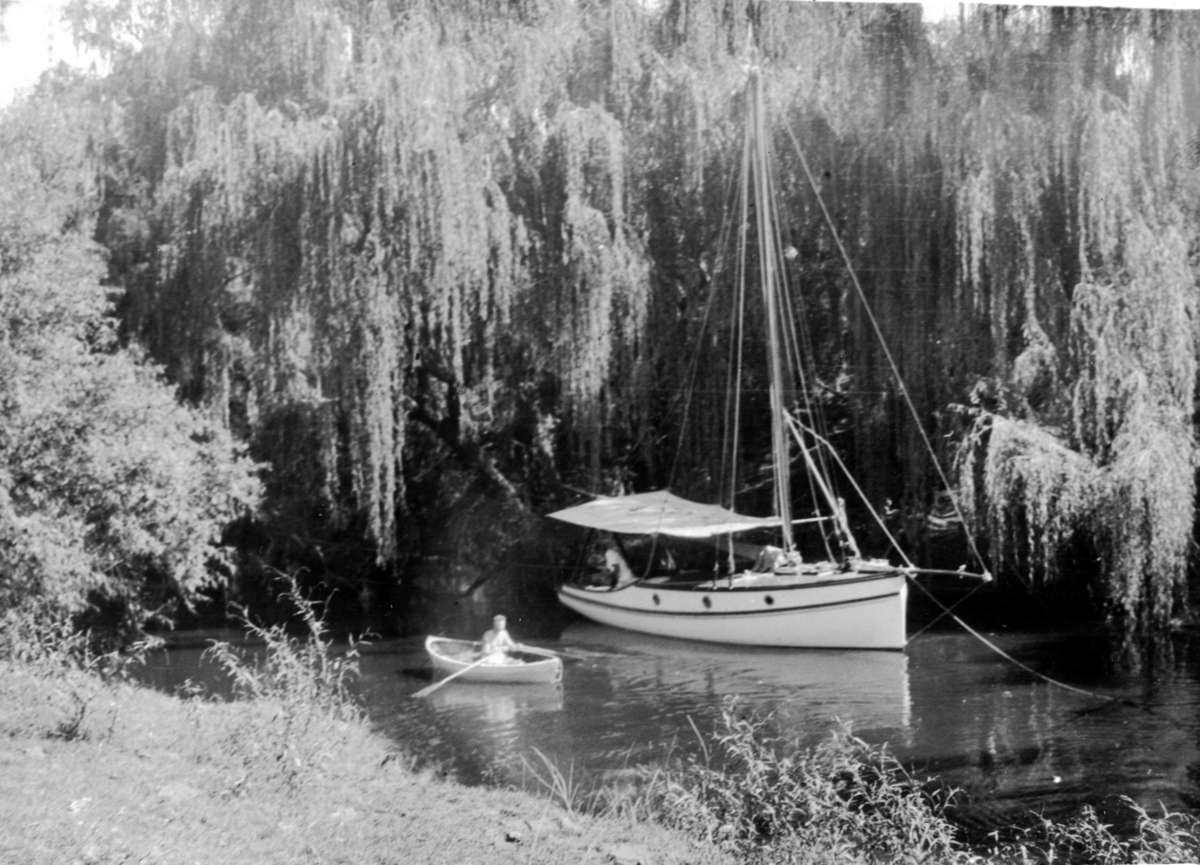 Maluka in happier times, probably on the Hawkesbury River in NSW