On Friday 25 January David Payne and I made our way north to Taree from Sydney. With one of David’s derivative plywood nardan (or derrka) strapped to the roof, and sheets of stringy bark in the boot of the car, we were on our way to the Saltwater Freshwater Festival on the banks of the Manning River on the mid north coast of New South Wales.

The festival is held every year along a river or on the coast at a centre within the 10 local Aboriginal Land Council areas grouped in the Saltwater Freshwater Arts Alliance. This festival, the fourth, was held in Taree after the 2012 event was washed out by the floods. 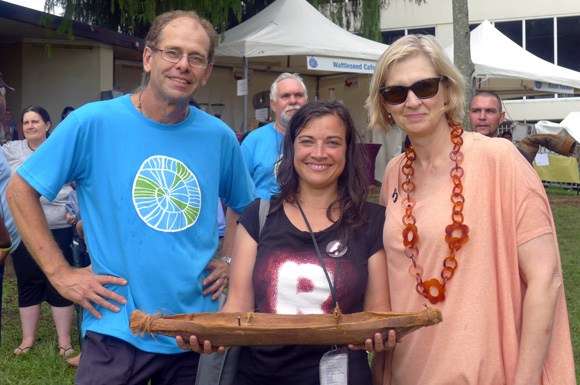 The weather threatened but the park was humming when we unloaded the boat in preparation for model building workshops the next day. That evening we attended the opening to hear Saltwater Freshwater CEO and Nawi patron Alison Page, the Deputy Mayor of Taree and festival patron Jeremy Donovan invite everyone to share 26 January, to enjoy the vitality, culture and entertainment of Aboriginal people of the river and sea country of the mid north coast. 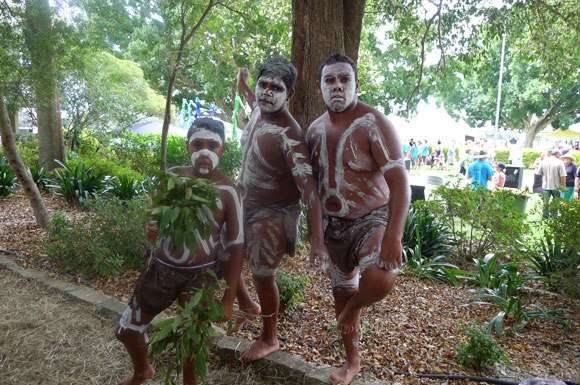 Dancers at the festival.

In an area encompassing the Karuah, Manning,  Hastings, Bellinger, Nambucca and Macleay rivers and the temperate coastal waters from Karuah to Coffs Harbour, the Saltwater Freshwater community covers Worimi, Biripi, Dunghutti  and Gumbaynggirr country. At the festival dancers from these four language groups joined to perform a newly commissioned Saltwater Freshwater dance telling local stories of culture and country.

Canoes were central to traditional Aboriginal life here, for river crossings, fishing, storytelling and in ceremonies. Recently the Alliance spearheaded two programs building canoes as a process to nurture traditonal skills, to pass knowledge to young men in the community. 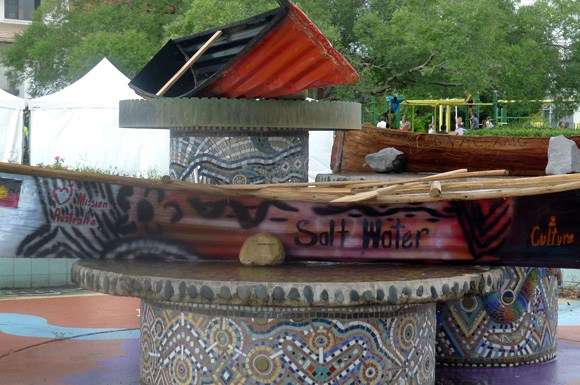 Corrugated iron and bark canoes at the Saltwater Freshwater Festival.

At  the festival, Elders from the Dunghutti and Biripi commmunities were in the Nawi tent with us, surrounded by canoes from their initiatives – a tied bark nawi and several galvanised iron canoes, corrugated iron being a common low cost material which for a time supplanted bark and timber craft on local waterways. 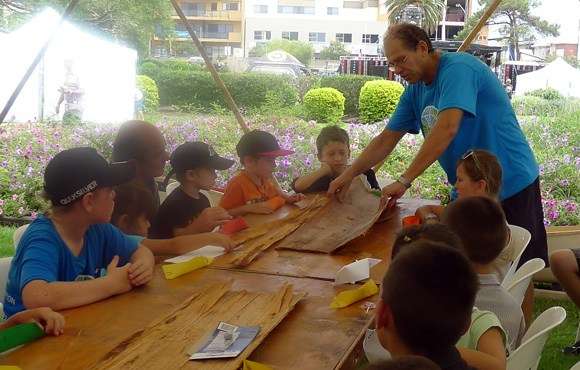 With Uncle Fred Kelly looking on, we laid out the materials to build model nawi for several workshops for visitors to the festival – the damp stringy bark, and strips taken from it as ties. With rain teeming down the workshops were busy as families huddled under the huge bamboo-framed structure. David began by showing the young children how to fold paper into a canoe shape, explaining that much the same process would reward them with a bark canoe, providing the materials were pliable. And unlike paper, stringy bark would actually float. 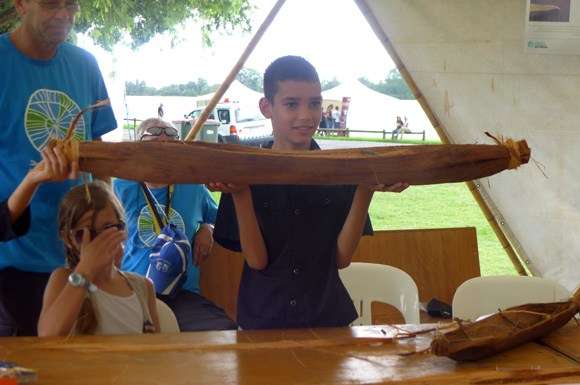 David and the children then set about exploring the properties of the materials, turning the dampened bark inside out, and scraping the fibre off the outside of the bark. Perhaps counter-intuitively, for not only children but adults too, it is the inside of the bark which becomes the outside of the canoe. To quote a long-forgotten television scientist ‘Why is it so?’

Well apparently the resin-rich, inner surface of the bark on the tree allows for a more waterproof and smoother surface when inverted to become the outside of the canoe.  At any rate this fact piqued the group’s interest as the bark was turned inside out to make a cylindrical shape. Each end was then pulled together and tied with twine, by David and the workshop participants, concentration writ large on their young faces – quite magical. Thwarts in the form of branches were placed across the boat to brace it a third way along the canoe’s length, which helps hold the shape.  Viola – a canoe!

These canoe workshops were enjoyed by local and visiting Indigenous and non-Indigenous children and represented a cross-cultural collaboration in their making. 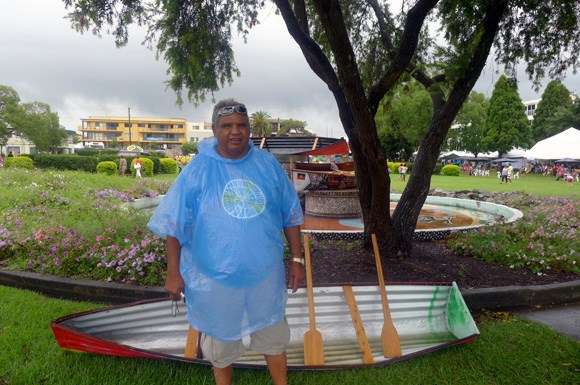 The three types of craft of the project represent change and local adoption of new materials and techniques – the traditional tied bark nawi; the dugout which found its way from the north, and the corrugated iron craft from the 20th century. More than technology however, the craft embody the spirit of the local resurgence of pride and knowledge and as in the model canoe workshops, are now used as teaching aids in the community. Hopefully we will see more of these canoes in Dunghutti country when the festival is held in Kempsey in 2014. 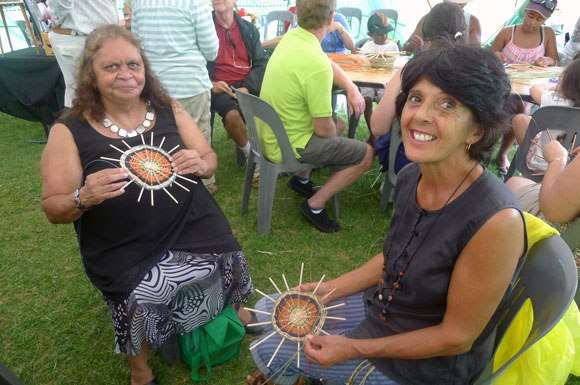 With tropical rain bursts thundering down, the festival spirit engaged all the senses – weaving ‘fish’ from lomandra or spiny mat rush with Rachel Piercy and the Worimi weavers, speaking with local artists and seeing their work, listening and talking in the yarn tent, dancing to the stellar line up of singers and musicians, munching on roo burgers, laughing to the chatter of the bingo call and sending messages of reconciliation in paper canoes alight with candles – a lovely echo of the canoes carrying fire on the water at night.

View all posts by Daina Fletcher→
Posted in: Indigenous , Vessels
↑