According to the media reports there were 60,000 people watching.  From my position, in the back of a canoe with Matt Doyle full blast on his didgeridoo in the front, I was too busy paddling and keeping it upright to notice just how many were watching us, taking pictures or filming. 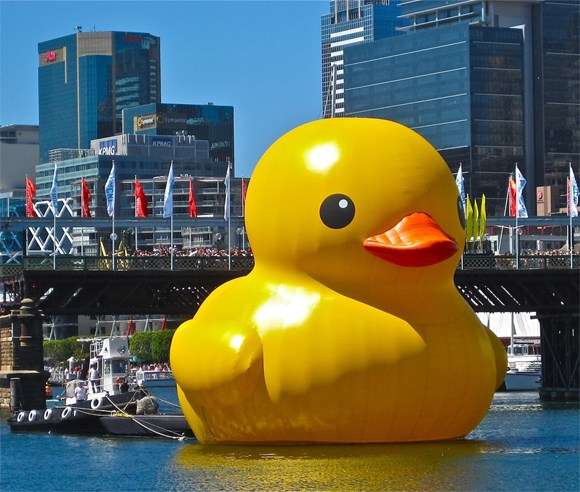 So how does a curator end up here, in Cockle Bay, Darling Harbour, paddling his self-designed-and-built plywood version of an Arnhem Land derrka, sitting behind Matt Doyle who is painted up, wired up and playing didgeridoo? We are opening the 2013 Sydney Festival event on Darling Harbour, which is featuring Dutch artist Florentijn Hofman’s Rubber Duck installation.

David paddling canoe and Matt playing didgeridoo during the performance

The path to our 15 minutes of fame began as an enquiry; the museum’s expertise with Indigenous watercraft has travelled far and wide in the wake of the Nawi- exploring Australia’s Indigenous watercraft conference in 2012.  Major Outdoors Event producer Vernon Guest approached the museum through Jude Timms, our acting Media and Public Relations manager, seeking help sourcing a dugout canoe.   I was asked to respond and could not suggest a suitable dugout, nor could I recommend the existing bark canoes, as we are still learning and none of the Sydney ones are reliably watertight for what they had in mind.  Vernon made other enquiries, but came back to my alternative suggestion, the plywood derrka I had made in 2010 – it’s watertight and capable of carrying two people. 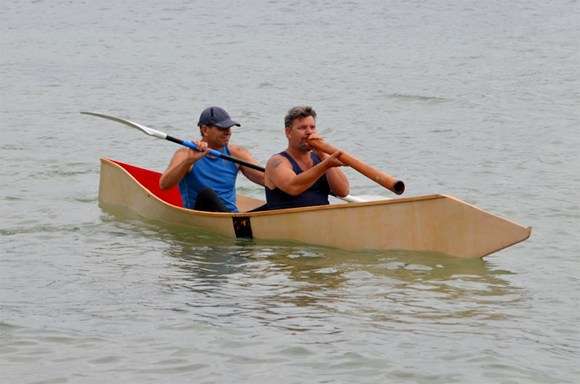 Testing the canoe at Chinaman’s Beach

We ran a first trial of the canoe-and-didgeridoo combination late in December, paddling up and down Chinaman’s Beach in Mosman to the amusement of the locals, and it was a success. At this point I had also become the paddler – it needed someone with experience, as the margins for freeboard were, shall we say, toward the minimum.

Testing the canoe at Chinaman’s Beach

Testing the canoe at Chinaman’s beach

With one day to go we ran our next trials on 4 January, and then did the dress rehearsal on Cockle Bay – all good and summer is here, it’s top weather!

The biggest issue is actually getting in the boat at the Heritage pontoon – it needs a cautious approach and hands supporting it till we are both seated and comfortable. The other dodgy bit is marking time – the holding pattern before we can take off under the bridge – bobbing around with ferry and water taxi wake is not easy, you need to be alert as the minutes tick by. Finally the signal is given and we head off – and it’s all fine, an easy run down to the stage at the end of the bay where Matt gets out, helped by his other didgeridoo players and dancers who then lead into the Welcome to Country and smoking ceremony as I exit back to the pontoon.

David paddles canoe back to pontoon after performance

I should point out that the museum has become a base for the event, housing the performers and many supporting watercraft, plus the big yellow duck. I am just one of a big cast of mixed groups –  a menagerie of dancers, acrobats, singers, sax players, taiko drummers, an alpenhorn player from Europe, tug boat drivers, mini tug and shower runabout skippers, and our own Sydney-based Indigenous performers.  The event crew all have at least one walkie talkie, rehearsal day is just non-stop communication and action in some sort of organised fashion. 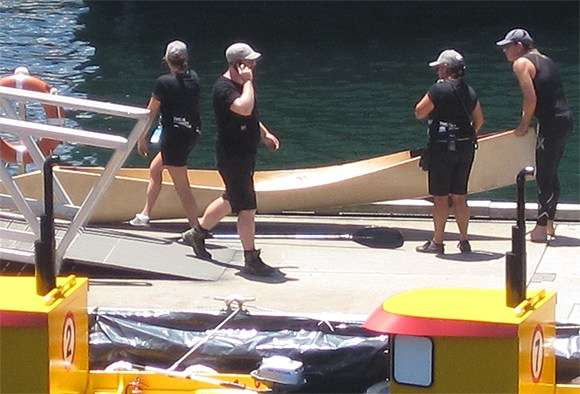 Setting up for the performance

‘How come you get to look so sporty?’ A good question put to me in my well-worn black 2XU and SKINS kayak paddling outfit, plus zinc cream, by an artist who is standing there in her pyjamas and bathrobe – it’s the dress theme for the day, reflecting the giant toy bath duck story about to unfold.

Unfold it did – event day is a cracker again, another typical Sydney summer day with a strong north-east breeze cooling the coast. We all congregate in the Terrace Room at the museum and as the countdown nears go-time we disperse to allotted places in groups with our stage crew minders – ready for action. 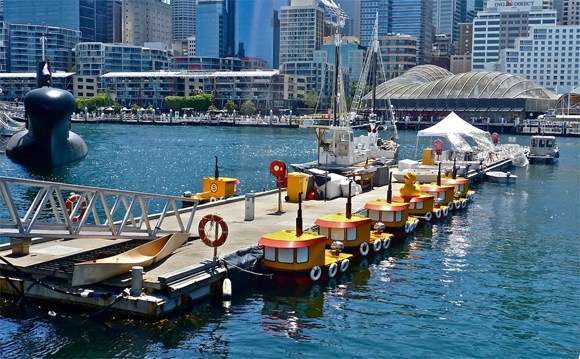 More or less on time Matt and I head under Pyrmont Bridge and into the bay – something of a crowd to say the least looks on as we dodge a water taxi or two, then suddenly it’s just us, plus the 60,000 onlookers – this is fun. And we are on the big screen! The festival is under way.

View all posts by David Payne→
Posted in: Vessels , Indigenous
↑