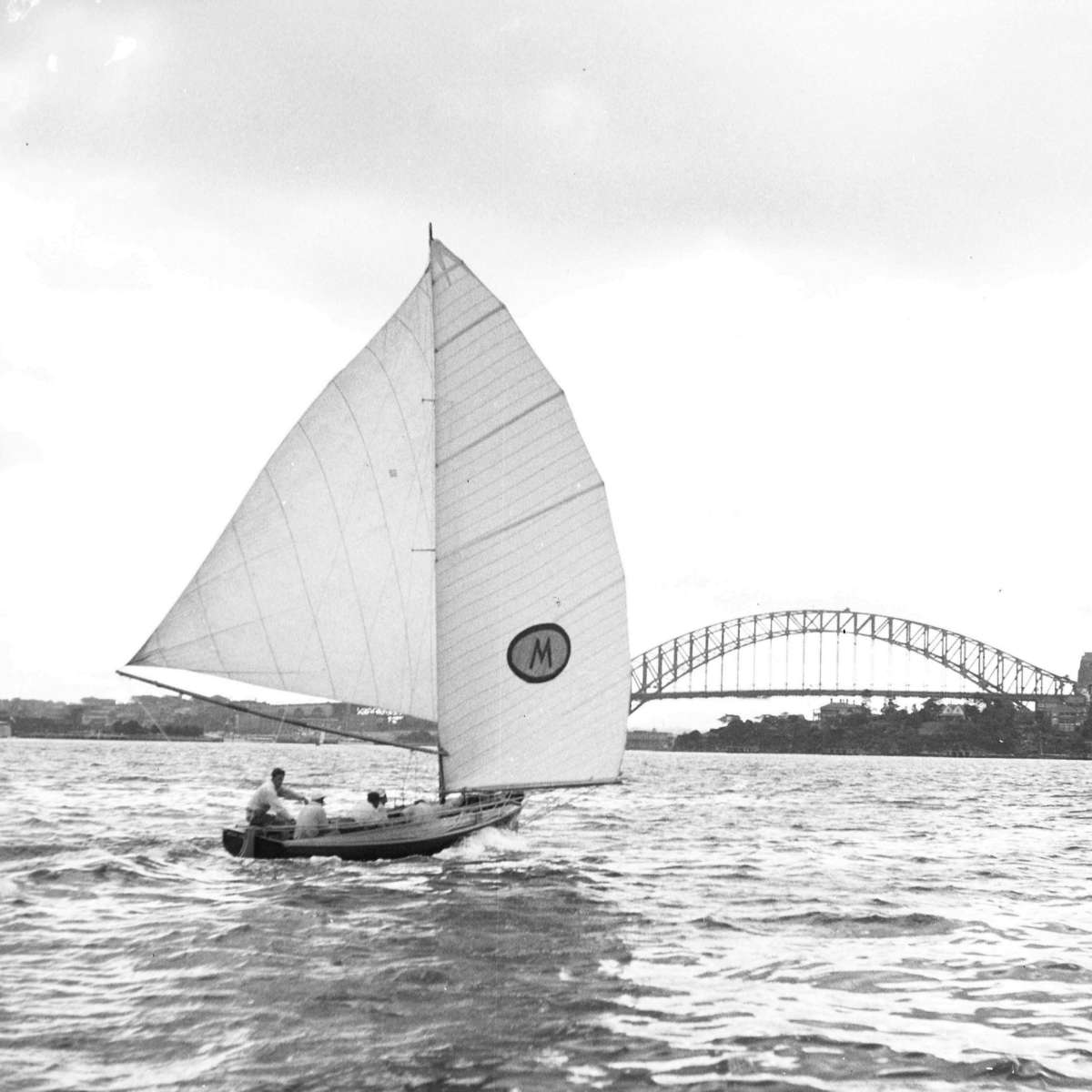 Meet Myra Too. In 1951 this vessel dominated Sydney sailing news headlines, and for a time was unbeatable in the hotly challenged 18 footer sailing competitions in Sydney Harbour. 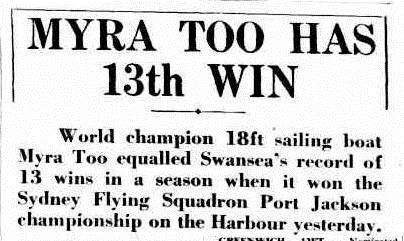 Designed and built by Sydney shipwright and sailing identity Billy Barnett, Myra Too entered the 18 footer racing scene and won the state, national and world championship in 1951. As a nation of sporting enthusiasts, Myra Too challenges our best athletes for sheer success. Sailing for the Sydney Flying Squadron, Myra Too beat back a number of strong New Zealand and interstate competitors to take the third of its trio of titles.

However as quickly as Myra Too had taken the Sydney sailing scene by storm, she disappeared into obscurity. Barnett went on to race the following year in his next model, Myra III, and Myra Too was sold several times, passing through different names, first Merle, then Minnawatta Too. The vessel did not return to the same heights of glory, and has since disappeared from the historical record.

Barnett was one of Sydney’s finest wooden boat builders and in the design of Myra Too, he created something particularly special with the vessel exceptionally suited to the conditions of Sydney Harbour. After Myra Too’s 1951 success, renowned New Zealand boat-builder Jack Logan was quoted in an Auckland newspaper as saying:

“Myra Too was in a class by herself. There were seven other boats in the contest with the same beam as Myra Too and they did not do any better…”

Unfortunately for boating enthusiasts, and particularly for Barnett himself, a fire at his McMahons Point boatshed in 1971 destroyed, amongst many other valuable items, the original 1/2 model he shaped to design Myra Too.

The Australian National Maritime Museum is proud to be assisting with research for a project to bring Myra Too back to life and rediscover the magic of her design. A replica is currently being built, supported by the Traditional Skiff Association that races other replica 18’s each Saturday on Sydney Harbour. ANMM curator David Payne has been working on plans in his spare time and Myra Too’s original designer and builder, Billy Barnett, (now in his late 90s) is also a part of the project. In a further nod to authenticity the new Myra Too is being built by Barnett’s former apprentice then shipwright Bob MacLeod. David Payne’s designs have been based on a combination of instinct, Barnett’s memory, newspaper and sailing articles and surviving photographs.

A cache of photographs of Myra Too rediscovered recently in the Australian National Maritime Museum’s William James Hall collection, has shed further light on the finer details of the champion 18 footer’s design. Not only do the photographs provide valuable details regarding measurements, construction and materials, they also capture moments of Myra Too’s glory. Several photographs show Barnett collecting the championship ribbon from a ferry and hoisting it up the mainsail after winning the National 18 footer title.

Throughout the New Year, we will endeavour to share with you the rebuild of this champion, the challenges and triumphs, and eventually – the moment Myra Too slips back into the familiar waters of Sydney Harbour.

See the photos of the Myra Too build as it comes together. 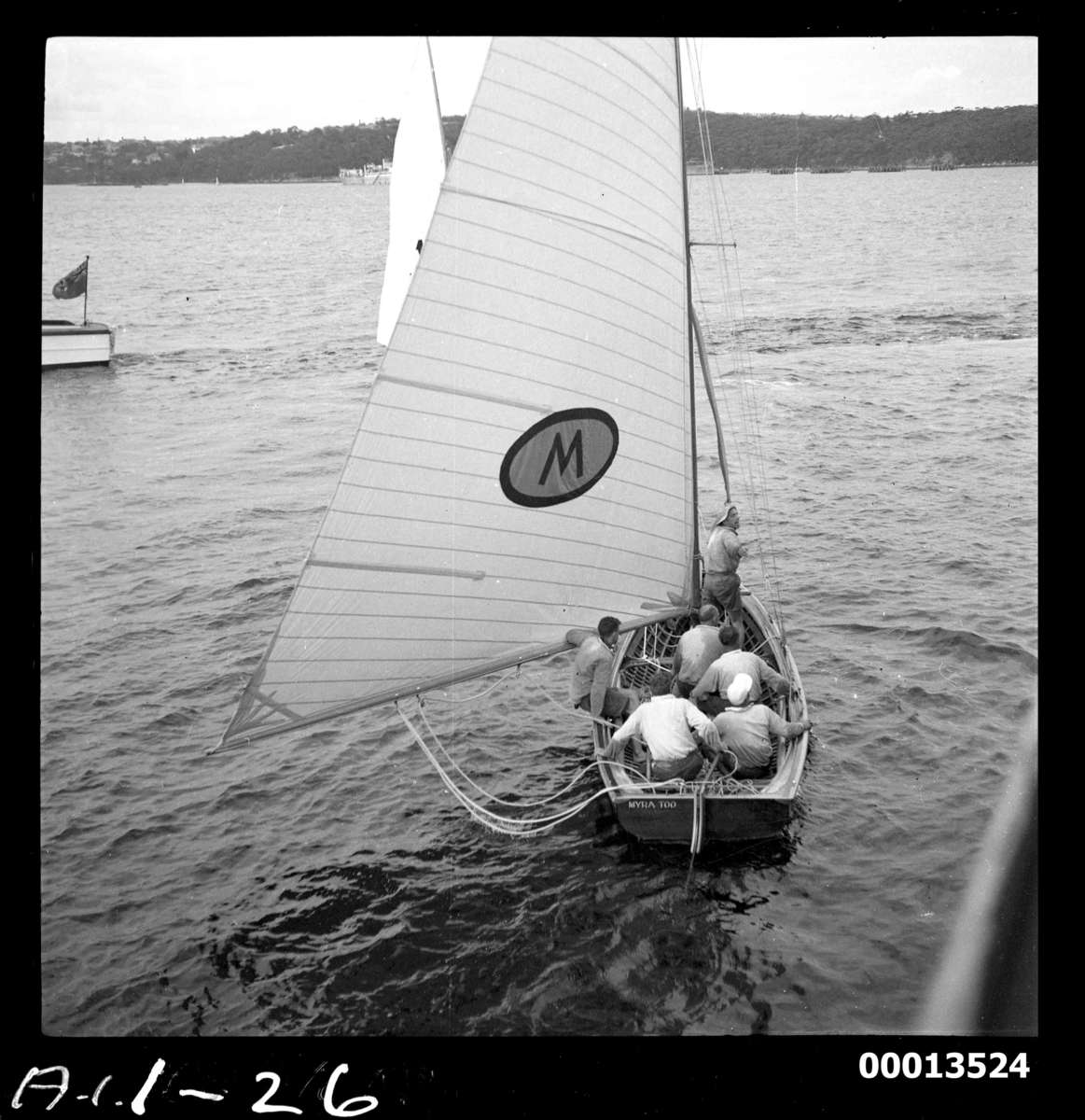 Crew of Myra Too celebrate after receiving the Championship ribbon during the 1951 National 18 footer title. William J Hall, ANMM Collection 00013525