Today is the birthday of all Australian horses and to celebrate I decided to write about shipping horses from Australia to India. Yes a rather unusual topic, but nevertheless a key story in our upcoming exhibition East of India: Power, Trade and Australia 1788-1857.  I have been spending my days trawling through historic newspapers, government records and diaries to find reports of shipping activities between Australia and India during the early years of European settlement.

Imports from India to Australia included flour, rice, muslin, chintz, shoes, furniture and rum. Unfortunately for the ship owners there were few goods available for export back out of Sydney. While John Macarthur is famous for introducing the merino sheep to Australia, he also bred horses and established the largest stud in the colony. In 1822 he sent the Governor General of India a stallion as a specimen of a ‘fine New South Wales horse’. Captain Collins was sent to Sydney from Madras in 1834, his mission was to purchase horses for the Madras artillery and dragoons. By the end of the year he had sent three shipments of horses to India. Independent agents and ship owners were also keen to make money and they began shipping horses direct, hoping to sell for a higher price. 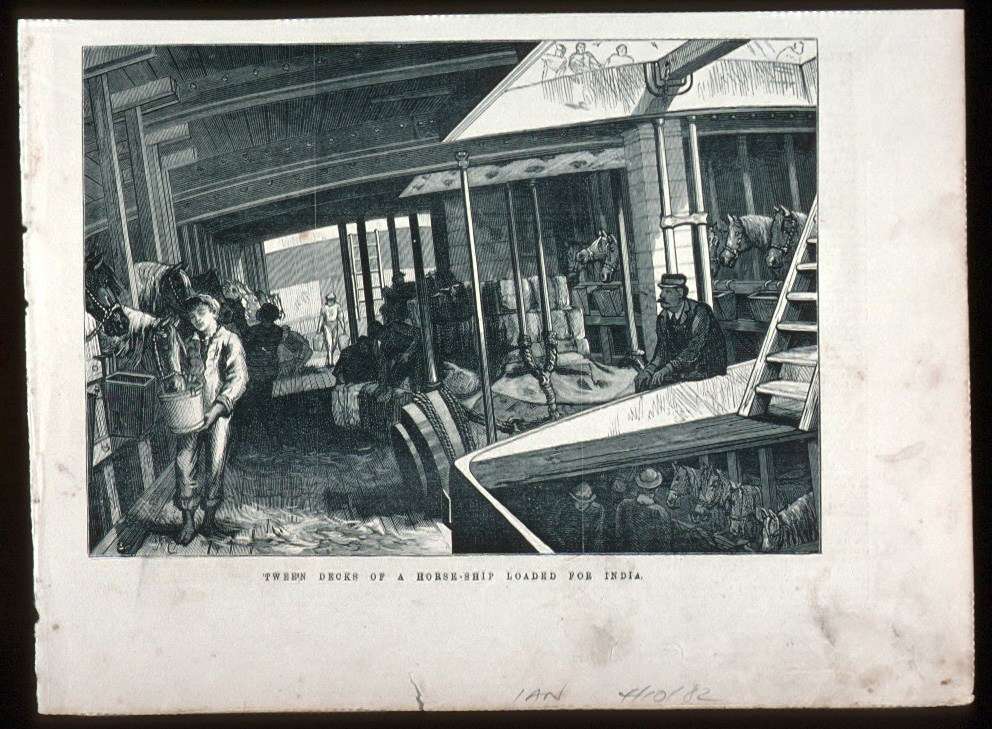 Offloading horses in Madras was particularly hazardous as shown in this dramatic painting from the collection of the Mitchell Library.

There was an absence of natural deep waters in the Madras region, so small country boats were sent out to meet the larger sailing ships. The horses were swung into the boats, and they were then taken to shallow waters, where the boats were capsized and the horses forced to leap out and somehow reach the shore. Daniel Wilson was responsible for looking after the horses onboard the Henrietta on a journey from Sydney to Calcutta and an excerpt from his fascinating diary held in the Mitchell Library illustrates one of the difficulties the horses faced on the journey.

‘Sunday 18th Feby. 1844-1845
We have now a great deal of trouble with the horses, they are quite worn out with standing so long on their legs that they are falling down every morning, especially Bowmans horses which are in very bad condition, being so when shipped.’

We are still working out how to tell the story of the horse trade in an effective and dynamic way for visitors. We could display paintings and reproduce historic advertisements or perhaps record dramatised accounts of diary entries with sound effects of loading horses onboard ship in the background. Another approach might be to interview a vet involved in shipping horses in the twenty-first century to reflect on the challenges involved.

While life onboard was difficult for all the crew and passengers, I feel especially sorry for the poor horses.

East of India: Power, Trade and Australia 1788-1857 opens in June 2013 and we will be posting regular updates on various aspects of its development over the next twelve months.

View all posts by Michelle Linder→
Posted in: Exhibitions , Arts and Culture
↑