Object of the Week: Kunmatjs

Kunmatjs are dilly bags from the Northern Territory used for carrying small fish such as catfish. They are a common item across many Indigenous groups in the Northern Territory and known by a number of different names depending on their region of origin. This bag is painted with red ochre and decorated with painted images of catfish in white clay. Traditionally dilly bags were left unadorned but artist Lena Yarinkura has decorated this kunmatji to express her local Aboriginal culture. Lena Yarinkura is an artist from south central Arnhem Land who works with fibres, barks, bronze and aluminium. Her works cover ceremonial regalia, baskets, bark paintings and sculptures. She has exhibited locally, nationally and internationally since 1987. 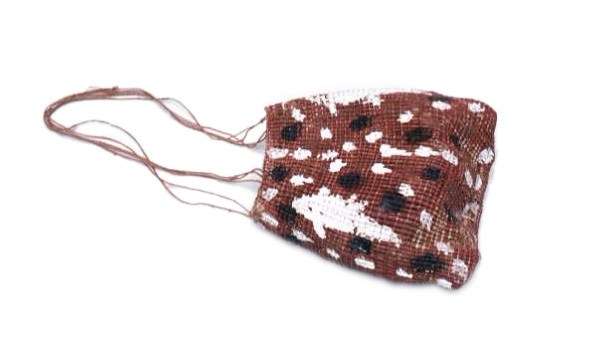 Dilly bags are traditional bags used for gathering food and could be hung around the neck in order to leave the hands free. They are typically woven out of natural fibres including grasses, animal tendons and reeds. Depending on the region of their origin, these bags have a variety of names and are produced from different materials. They are typically left undecorated without paint when used for their traditional purpose of gathering food. Today they also serve an artistic purpose and are often painted with images such as catfish.

Pandanus is a common material used in Arnhem Land for making baskets, bags and traps. The plant grows in Queensland, the Northern Territory and northern Western Australia in damp environments near creeks and waterways. The top leaves of the plant are collected, stripped and dried in preparation to be woven into traditional objects such as baskets, mats, fishing nets and sculptures.

This kunmatj is representative of Indigenous weaving techniques and functional carrying equipment used in the Northern Territory. It is a common utilitarian object used by men and women when hunting and gathering food. Today these functional items are also produced for artistic purposes.

View all posts by Nicole and Penny→
Posted in: From the collection , Indigenous