Reg #00000022 ANMM Collection ‘The same Native presenting the fish he has caught to his wife / Native man of NS Wales with his mutton that the [sic] spear fish with’.

In the late 1980s the Australian National Maritime Museum found itself in the process of acquiring two unusual paintings. The works dated to the 1820s and depicted Aborigines fishing: one portraying a couple in a canoe and the other a man presenting a catch of fish to his wife (shown above). At this point the ANMM was still just a construction site, but curators working to build the museum’s collection recognised the rarity of the items and their possible contribution to our knowledge of the history of Indigenous Australians and their long association with the sea.

However there were some issues to consider with the two paintings. For a time, confusion reigned over the identity of the artist. The images, quite stylised, appeared to be by the same hand as a number of other works that were all signed with the surname Browne or Brown, and a variety of initials; T, TR, IR, JR. A study by Niel Gunson on the artworks strongly suggested they were all by the one man, Richard Browne (1771-1824), an Irish convict.

Browne was born in Dublin in 1771 and sentenced to transportation in 1810, possibly for the crime of forgery. He arrived in Sydney in 1811 and within a few months had reoffended and was convicted a second time. This time Browne was sent north, to the secondary penal colony of Newcastle and it was here that he began producing artworks. Browne’s best known works from this time appear in the manuscript titled Select Specimens From Nature of the Birds and Animals of New South Wales. The commandant of Newcastle, Lieutenant Thomas Skottowe, had an interest in natural history and commissioned Browne to create the drawings for the manuscript which included many images of Aborigines, their tools and their activities as well as insects, birds and animals.

Of the later period of Browne’s life, 1817-1824, little is known. It appears that he was designated ‘free by servitude’ in 1817 and was based in Sydney, marrying, and fathering several children before dying on 11 January 1824.

Retrospectively, Browne’s artworks have received a wide variety of interpretations, praise and criticism. The elongated, angular style of his figures have been described as caricatures, aimed at amusing rather than informing. It is thought that many of his works were intended as souvenirs and conformed to an English colonist perspective rather than providing a realistic record. It is difficult to determine what Browne’s intentions were, however he most certainly painted many of the images from life and it has been argued in recent years that his works were created as, and are useful as, ethnographic records. Many of Browne’s paintings, now in the collections of the National Library of Australia and the State Library of NSW, contain details of Aboriginal tools, clothing and occupations. 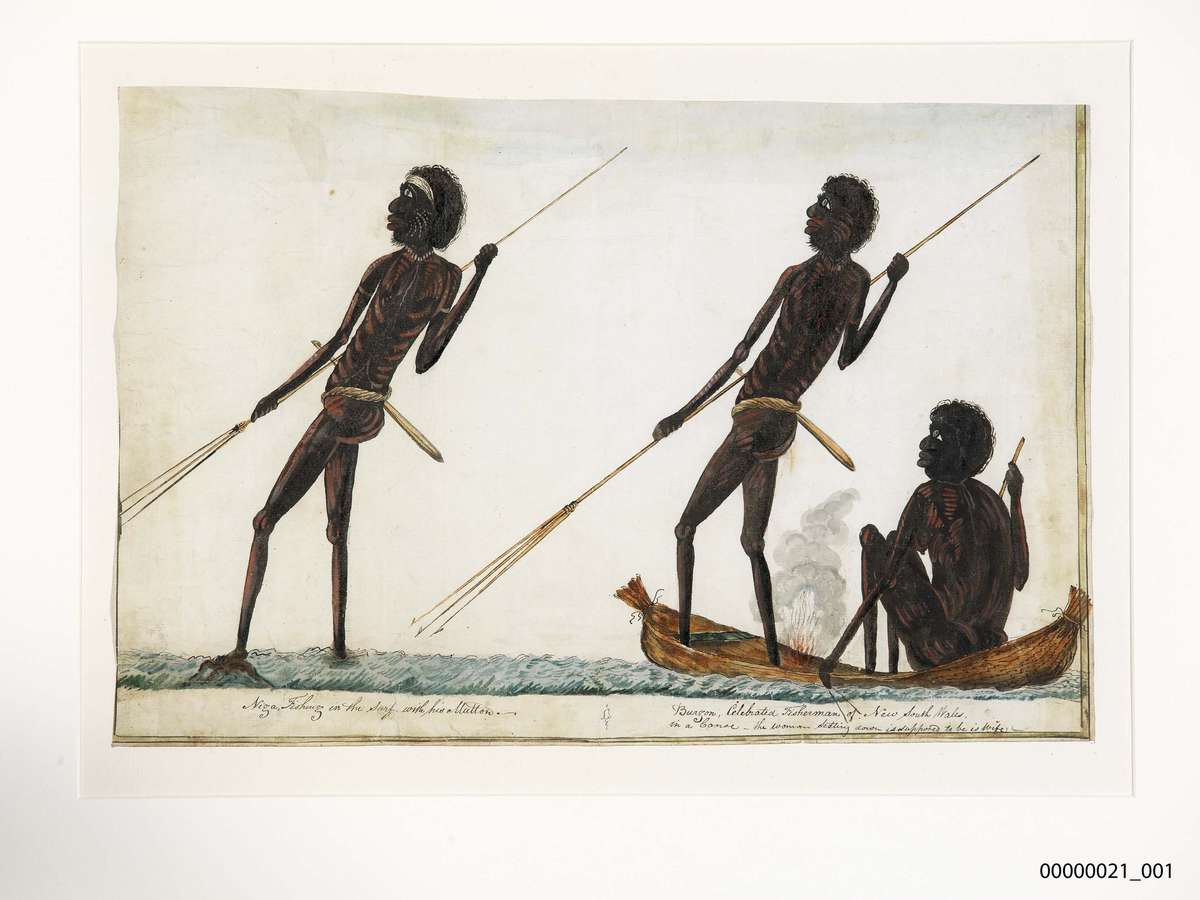 Reg #00000021 ANMM Collection. ‘Niga, Fishing in the surf with his Mutton / Burgon. Celebrated Fisherman of New South Wales, in a canoe – the woman sitting down is supposed to be is [sic] wife’.

Most importantly for the Australian National Maritime Museum, this painting by Browne provides a rare image of Aboriginal watercraft, in this case a bark canoe, generally made from a single piece of bark lashed at both ends. As depicted in Browne’s artwork, men generally stood in canoes to fish and a fire was produced within the canoe for warmth and cooking. ANMM curator David Payne has recently been involved in workshops to reproduce and build these types of lashed-bark canoes.

Browne’s painting, caught perhaps between a realistic interpretation and a fixed European perspective nevertheless contributes to the historical information available to us in relation to Aboriginal watercraft technologies.

Next week the museum will be hosting the first major conference on the watercraft of Aboriginal and Torres Strait Islander peoples titled Nawi : Exploring Australia’s Indigenous Watercraft. This important conference will bring together a wide range of academics and experts and a great variety of sources to promote the study of this important topic. For information on the conference, or to register to attend, please visit our website.

View all posts by Nicole and Penny→
Posted in: From the collection , Indigenous , History and Colonisation
↑