Since my last post about building a NSW south coast, tied-bark canoe, I’m happy to say that I’ve launched the canoe! Read on to see how I went… 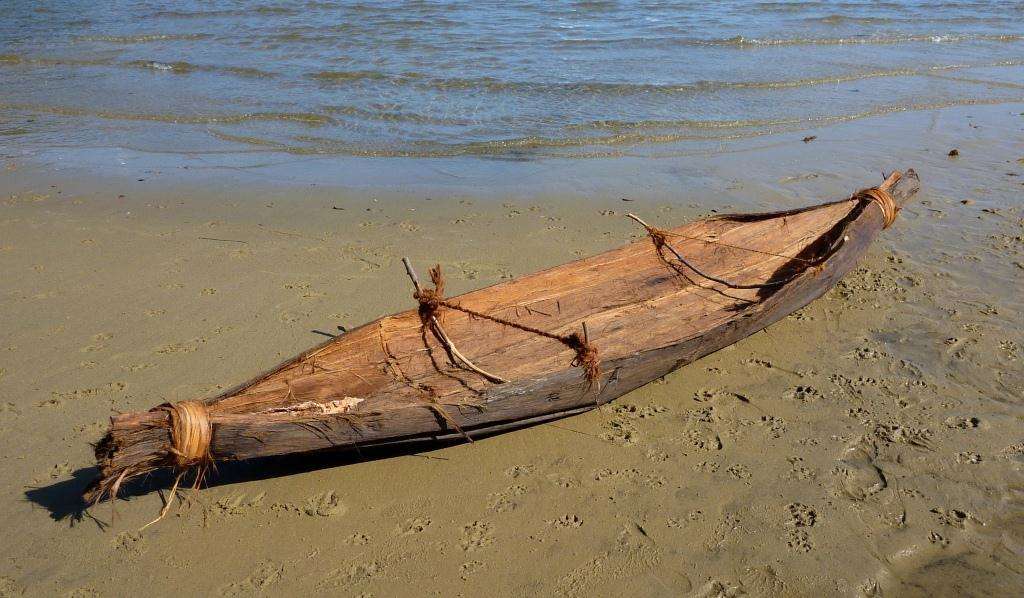 Before launching the canoe I needed a cradle for transport. Two longitudinal beams seemed the best approach to support the long flat bottom profile, so the girders and two cross pieces were made from treated pine and screwed together. Webbing straps were fitted to secure it to the cradle and spread the load better over the topside edges. The cradle was then tied tightly to the roof racks. Ready to go at last.

Last Sunday afternoon gave me an opportunity to test the craft, but I was anticipating some problems with leaks. I had found a hole in one end, and filled that with paperbark wedged in tightly, but I was aware there would likely be others hidden from view. My plan was to at least paddle and pole it around for a short period even if it had to be bailed out quite regularly.  And that’s about how things panned out.

We went to Sirius Cove in Mosman on Sydney Harbour, 5 minutes or so from where I live. I had paddled another nawi there over a year ago, one that belonged to James Dodd.  I had also taken my plywood version of an Arnhem Land canoe along then, and the bay had been excellent for testing both craft. It is reasonably sheltered, with a good area of shallows and then deeper water, and not far to carry the craft from the car either.

My younger son, helped me carry it down from the car, its actually quite light, and my wife took the pole and camera. After taking one good shot of it sitting by the water there was nothing else to do, so time to try it out.

I pulled it out into deeper water, and immediately water began seeping in along the one long crack that had always been there, which I had hoped was only partially through the panel. Unfortunately in a number of spots it was right through.  A quick calculation suggested I had about five minutes before I would need to bail it out and start again, so not a moment to lose! 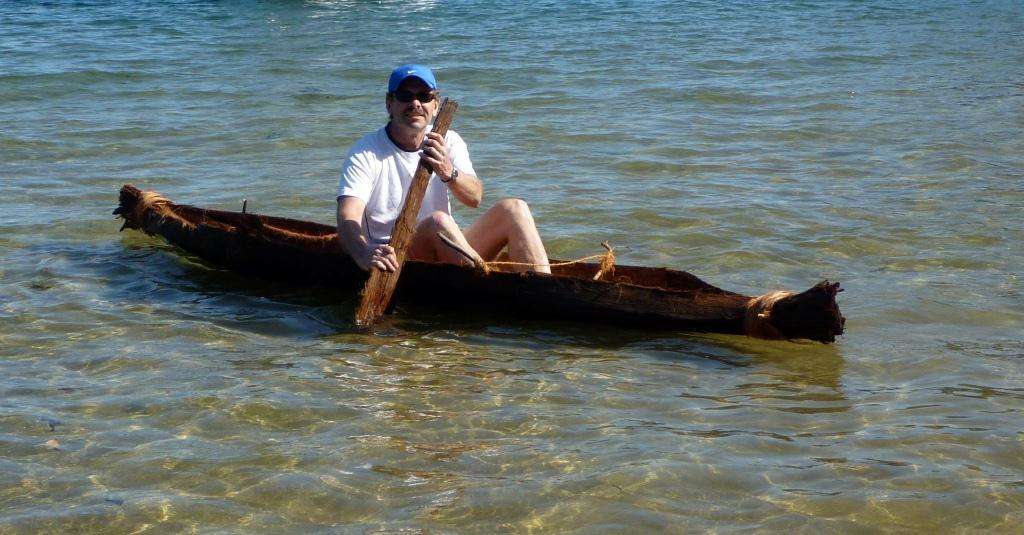 I sat down into it and started paddling away from the beach with a bark paddle, moving well too, but pushing into the small waves revealed a new hole in the folds in the front end. I took another minute off my calculation and turned around so the camera man (my son) could take some photos. 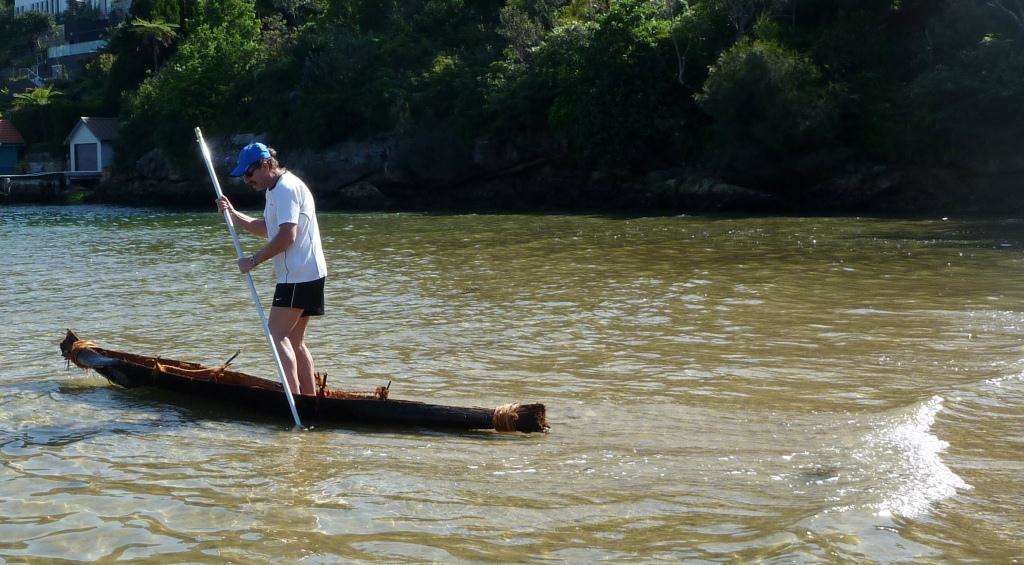 Back onshore in time to bail it out, I decided it was feeling very stable, so why not try poling along?  I had a small extra bit of bark with me to stand on and spread the load better, so stepping onto that I pushed off with the pole and away, no problems at all as we headed out away from the beach.  Well almost, as I poled along it gradually filled and so I turned to pole it parallel to the beach. Then a bigger wave or two came through, and one rolled over the side, followed by another and that was time to step out, we were filling fast.

Back onshore, we tipped the water out and had a family conference. It worked, no question there, but the leaking problem was not going to improve, and just those two short tests had shown that it was stable, it had enough volume,  it sat well in the water, but maybe the sides could have been a bit higher, and the bottom a bit thicker too.

A decision was reached unanimously, the two short voyages had produced all the results needed, and we had the photos, time to go home!

The craft is back in the garage now, on its cradle for support, and I am considering the possibility of sealing the cracks and holes, but it would need a lot of resin.  So, I will seek some advice before doing anything further.  In the end, I think I have done well to turn an old piece of bark into the right shape, but it was always going to leak as the crack and holes were there to begin with, and a fresh piece of bark would eliminate all of them.

So if I repeated the exercise with a new bit of bark it would be fine, but two things I have learnt:  I would make the sides higher to allow better for waves, and I wouldn’t take as much material off when I stripped the inside of the canoe.