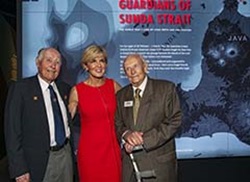 US Consul General Valerie Fowler unveiled a plaque in memory of the crews of HMAS Perth (I) and USS Houston during the ceremony.

HMAS Perth (I) was lost in company with USS Houston, during the Battle of Sunda Strait against the Imperial Japanese Navy on the night of 28 February 1942 off the coast of Indonesia.

The Guardians of Sunda Strait exhibition tells the heroic story of the crews of USS Houston and HMAS Perth, as they fought a superior force of Imperial Japanese warships.

It brings together emotional accounts from survivors of the battle as well as significant objects from various international collections including the Australian War Memorial, the Royal Australian Navy’s Heritage Collection, the Sea Power Centre - Australia, the University of Houston and the US Navy’s History and Heritage Command.

The exhibition also examines the wrecks of both ships which remain on the seafloor off the coast of Indonesia, and the recent work of Australian and Indonesian authorities, including the Australian

The museum and ARKENAS conducted a joint dive on the wreck of HMAS Perth (I) in May this year, supported by officials from TNI-AL (Indonesian Navy), Indonesian Ministry of Marine Affairs and Fisheries, Indonesian Ministry of Education and Culture (Jakarta), the Directorate of Heritage and Museum- Regional Office Serang (BPCB) and the Australian Department of Foreign Affairs & Trade.

The dive revealed HMAS Perth (I) had suffered significant damage from illegal salvaging with only 40 per cent of the vessel remaining.