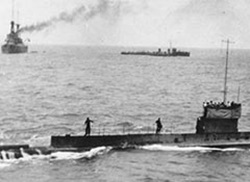 One hundred and three years since the mysterious disappearance of Australia’s first submarine HMAS AE1 with all 35 members of its crew, the Australian National Maritime Museum has announced a new campaign to raise funds through its Foundation to search for the wreck.

The museum has partnered with FindAE1 Ltd, the Royal Australian Navy, Silentworld Foundation, Submarine Institute of Australia and Fugro to search for AE1 in an attempt to provide closure to the many families of the lost crew. The search has been approved by the PNG Government and is supported by the PNG National Museum and Art Gallery.

The museum is seeking to raise funds for the search which will be conducted by expert surveyors and maritime archaeologists from the partner organisations utilising Fugro’s highly sophisticated search technology.

AE1 was patrolling the waters of the Duke of York Island group, not far from Rabaul in Papua New Guinea, as part of a campaign by the Australian Naval and Military Expeditionary Force. The purpose of the campaign was to eliminate the German presence in the region and destroy German wireless communication stations. It was lost with all hands on 14 September 1914. No trace of the submarine or its multi-national crew has ever been found.

John Mullen, Chair of the Australian National Maritime Foundation said, “The loss of AE1 is one of Australia’s greatest maritime mysteries. This search is of major importance both to Australia as well as to the memories of our brave servicemen lost at sea many years ago.”

“This major undertaking to locate a significant part of our history requires the best technology available as well as highly qualified personnel who are expert in operating the equipment and analyzing the data gathered. Naturally this requires substantial funding.”

The Australian National Maritime Museum pays homage to AE1 and its crew through a permanent floating memorial sculpture ‘… the ocean bed their tomb’ by leading Australian light artist Warren Langley. It also has several items relating to the submarine in its collection and on display in the Museum’s Royal Australian Navy gallery.

Kevin Sumption, museum director said, “The story of AE1 is very important to Australia’s maritime history and we are proud to be keeping its memory alive for future generations through our permanent displays and our commemorative artwork. We are pleased to be part of a highly motivated team committed to finding its final resting place.”