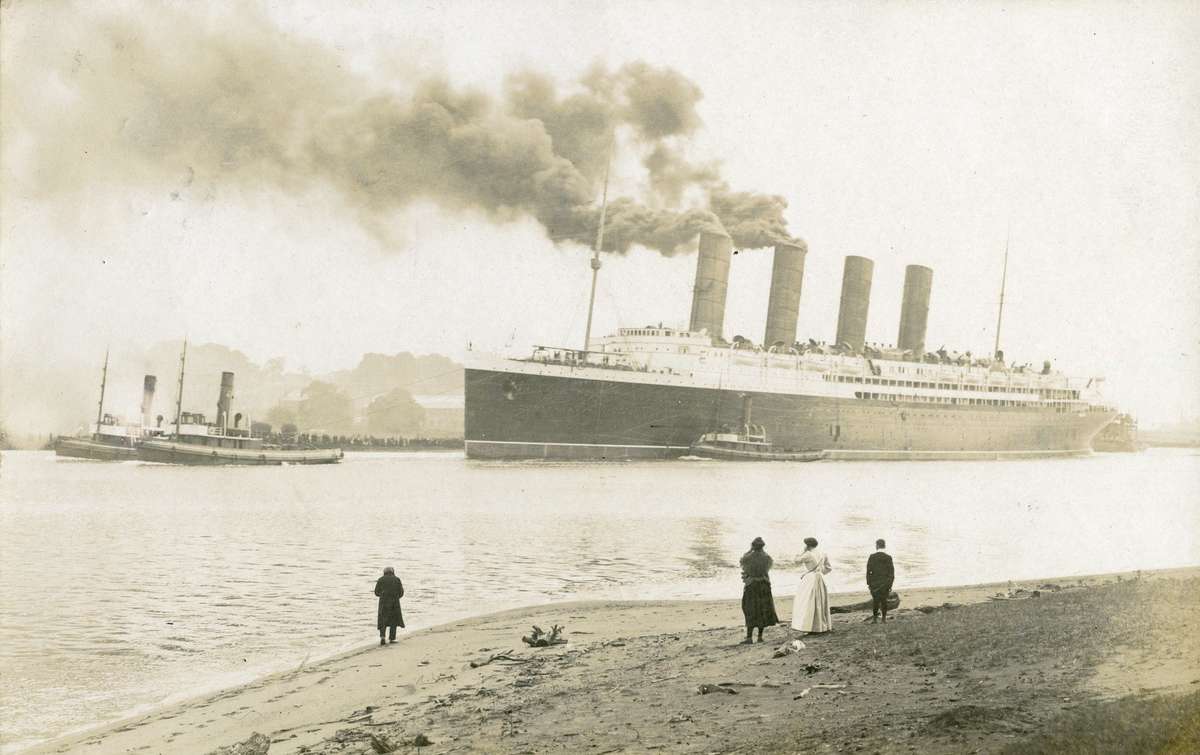 Off the Old Head of Kinsale, within sight of the green Irish coast, Cunard’s Queen Victoria will soon pause on her Lusitania memorial cruise to mark the centenary of Lusitania‘s sinking — a maritime tragedy inextricably tangled, then as now, in the horrors and controversy of war. Ashore in Cobh, where the Irish fishermen of so long ago landed row upon row of bodies, commemorative wreaths will be laid at the feet of the sorrowing angel of the Lusitania memorial, a monument to these causalities of a war that claimed so many lives. 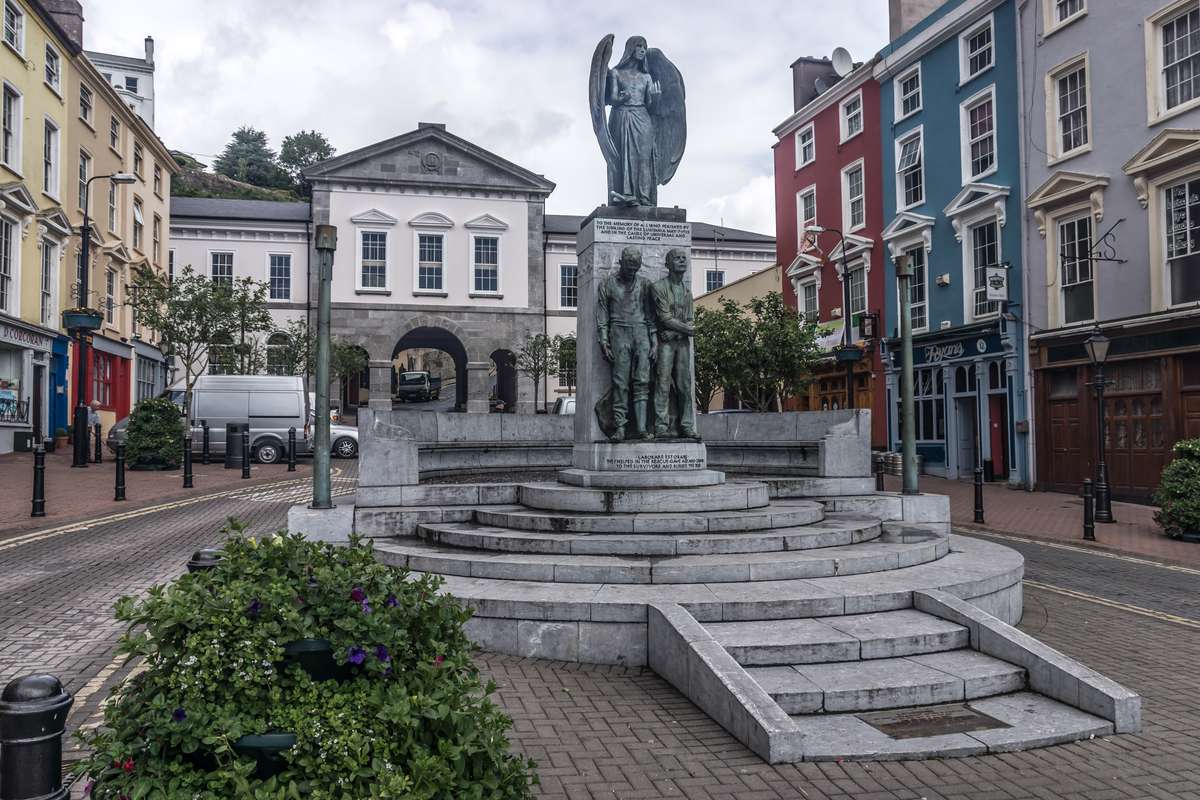 Lusitania, a Blue Riband holder and for a brief period after her launch the largest ship in the world, was born in a climate of fierce rivalry among European shipping lines competing for the lucrative North Atlantic trade. International business figures, the social set travelling between Europe and the New World, the developing middle class desire for travel and tourism, and the immigrant trade that formed an essential financial underpinning to shipping commerce all fed a thriving trade.

Faced with the need for fast, luxurious ships that could match their competitors, including the successful German lines, in 1903 Cunard entered into an agreement with the British government for a loan and other financial backing to enable the construction of the Lusitania and Mauritania. In return, the two liners would be built to Admiralty specifications for conversion to use as auxiliary cruisers in time of war. 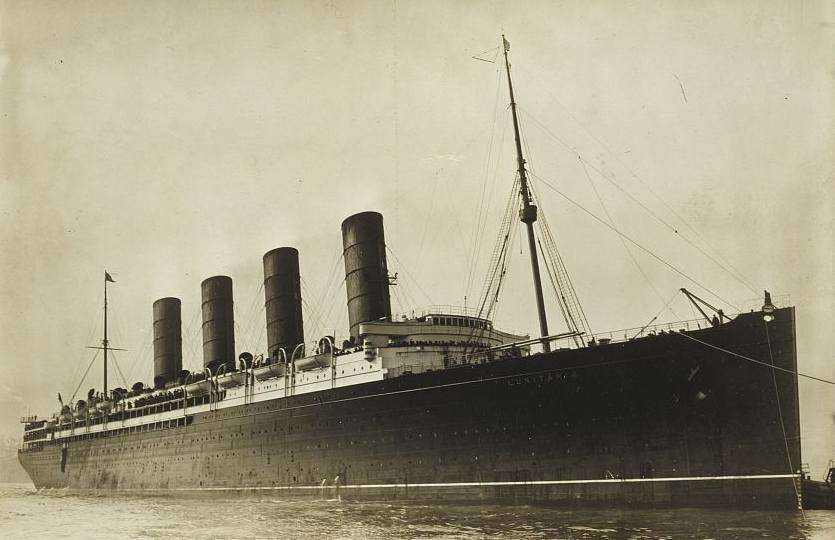 Following Britain’s declaration of the North Sea as a war zone late in 1914 and warning that any ships carrying contraband (including foodstuffs) to Germany did so at their own risk, Germany declared the seas around the British Isles a war zone. From 18 February 1915 allied ships in the area might be sunk without warning.

On April 22, a notice from the Imperial German Embassy appeared in some 50 American newspapers, warning citizens of neutral America that in light of the state of war between German and Britain:

Vessels flying the flag of Great Britain, or any of her allies, are liable to destruction in those waters and that travellers sailing in the war zone on the ships of Great Britain or her allies do so at their own risk.

It appeared alongside advertisements for Lusitania’s return sailing. Lusitania sailed as scheduled. 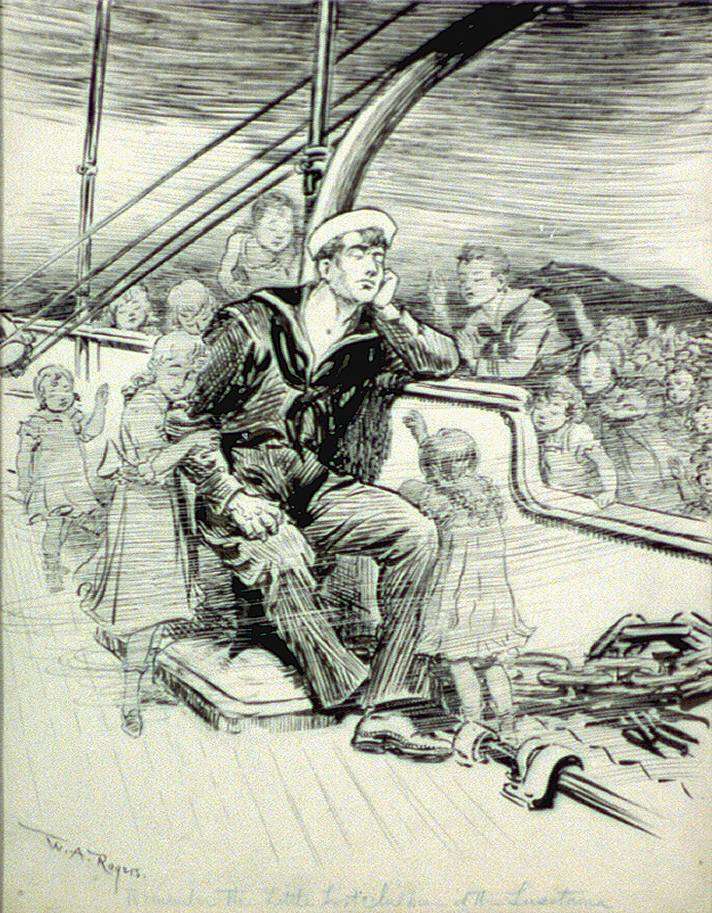 “Remember the Little Lost Children of the Lusitania” by William Allan Rogers, c. 1918. The deaths of so many children on board the ship horrified many – of 124 children on board, 94 perished. Only four of the 35 infants on board survived. George Grantham Bain Collection, Library of Congress.

On 7 May 1915 the Cunarder, with a complement of 1,960 passengers, crew and stowaways, was approaching the end of her crossing. Passengers anticipated docking in Liverpool later that afternoon. Approximately 11 miles off Ireland’s Old Head of Kinsale, sailing parallel to the coast, the liner came into the sights of German U-Boat U-20. U-20’s commander gave the order to fire a single torpedo. It struck on the starboard bow, and was quickly followed by a secondary explosion within the Lusitania’s hull.

The ship quickly foundered with a prominent list to starboard, which made launching the lifeboats perilously difficult. The rapidity of the sinking (approximately 18 minutes) and the extreme list meant that the evacuation was carried out under chaotic conditions, and most lifeboats were not successfully launched. Although the sinking occurred within sight of land, witnessed even by some ashore, the heroic efforts of local Irish fishermen who raced to the scene were not enough to avoid loss of life. Of the 1,960 on board, 1,197 perished, most of drowning and hypothermia before rescue could reach them. Among those fighting for their lives were some thirteen Australian passengers and crew, half of whom perished. 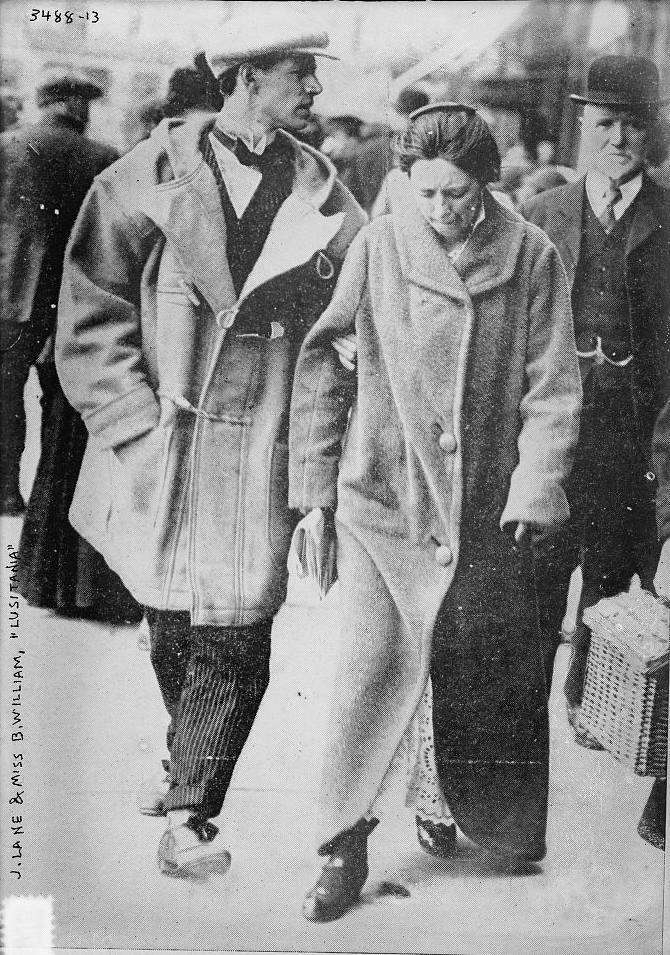 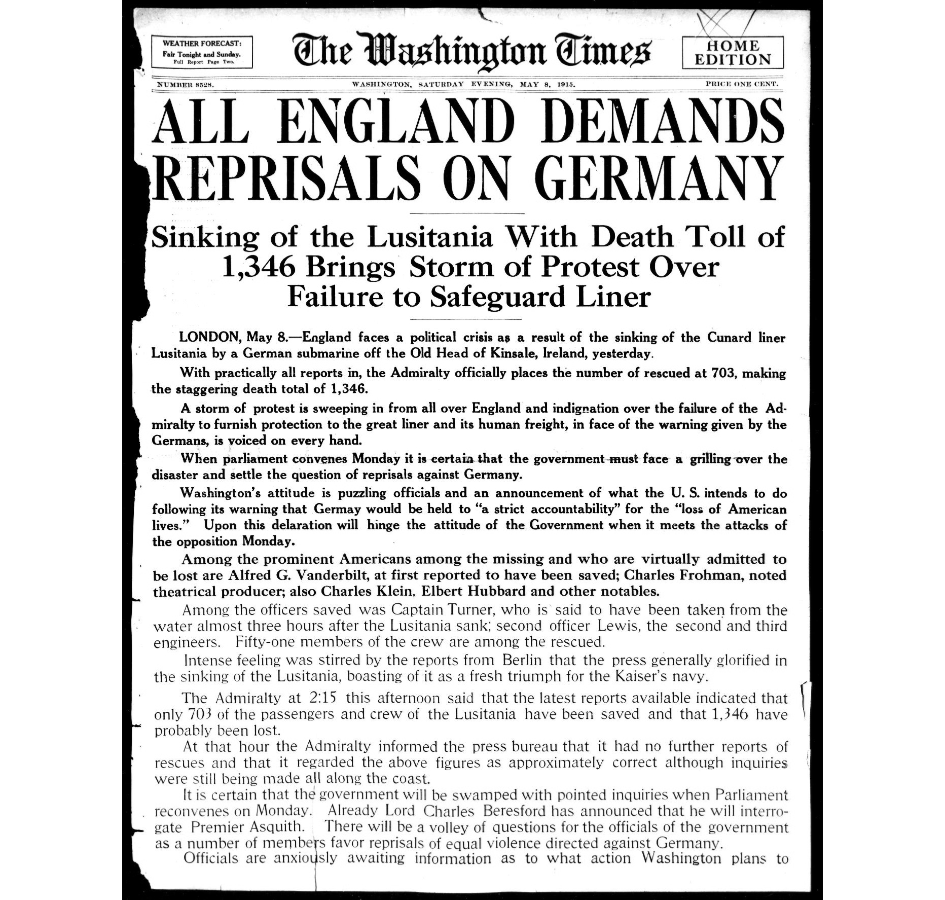 The Washington Times of May 8, 1915 reports on the mood of horror and outrage in Britain and the American shock at the loss of civilian life, including that of many Americans including several prominent figures.

While the loss of American lives in the disaster did not, as has sometimes been claimed, push the United States into World War 1 on behalf of Britain and its allies (the USA would not enter the war until April 1917, nearly two years after the sinking), it did help colour American public opinion on the war and would be a powerful propaganda tool for Britain, and a recruiting tool for the USA when it mobilised.

Today, 100 years after the sinking, controversies around the disaster are still debated among historians and liner enthusiasts. Lusitania’s status as a legitimate wartime target, the question of what contraband (if any) it carried, the cause of the second explosion, questions around the actions of its captain and the British Admiralty in the lead up to the torpedoing and in the aftermath continue to generate discussion ranging from technical issues to the very ethics and morality of warfare itself. 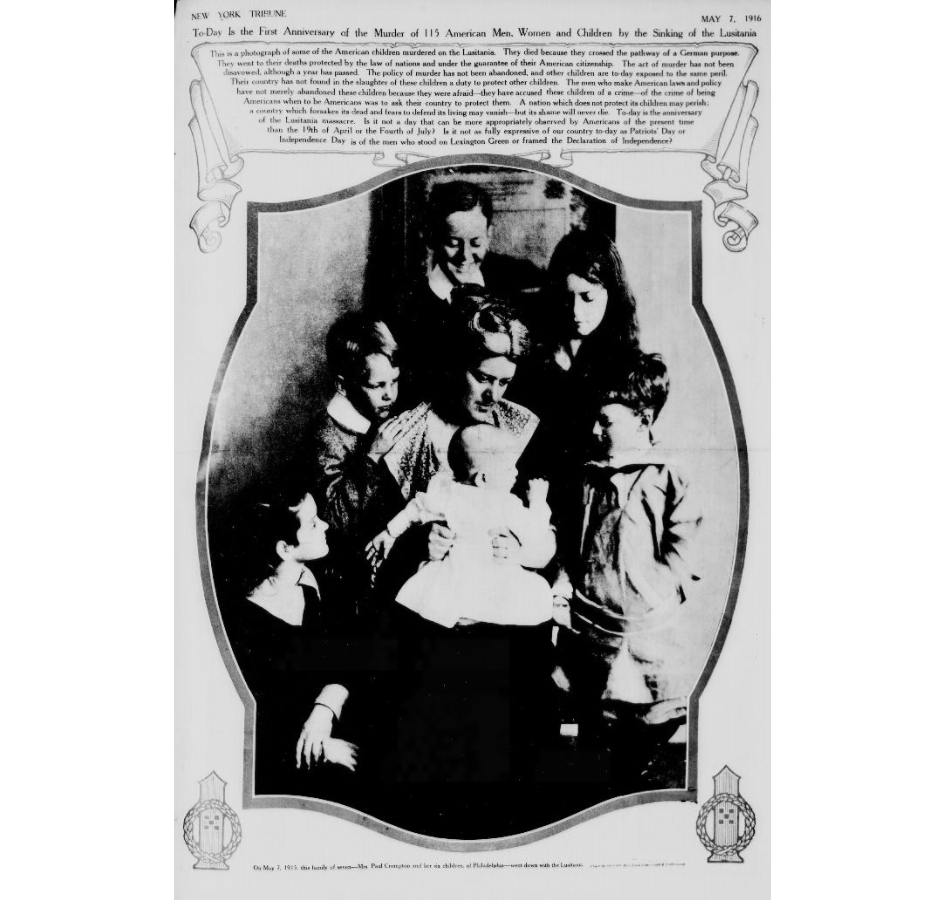 The New York Tribune of May 7, 1916, on the first anniversary of the sinking, features a photograph of the Crompton family. All the Cromptons – husband, wife, five children and nursemaid – were lost in the sinking.

View all posts by Inger Sheil→
Posted in: Vessels
↑