This Sunday, the iconic laser dinghy class is set to celebrate its 50th anniversary in grand fashion on Sydney Harbour.

At 10 am on the 20th of June, a world record attempt of over 200 International Laser Class Association (ILCA) lasers will sail in a parade from Sydney Opera House to South Head to celebrate the fiftieth birthday of the laser class. Double Bay Sailing Club, the host for this event, has invited sailors from around the country to participate. Andrew Cox, Commodore of Double Bay Sailing Club, expresses his excitement for the day:

This is going to be real spectacle, with such a large fleet framed against the iconic backdrop of the Sydney Harbour Bridge and Sydney Opera House – led by 13-times World Laser Masters Champion, Brett Beyer , on a commemorative gold-coloured Laser created for the occasion by the  Australian ILCA Laser builder , Performance Sailcraft  Australia.

Since the laser was originally developed in 1970 by Ian Bruce and Bruce Kirby, over 280,000 of the class have been sold worldwide. The minimalist design and affordability of the laser is central to its appeal. Ian Bruce recalls his original motivation for the craft:

Its design parallels a ‘one design class rule’ category – effectively restricting any design modifications to the class unless they are specifically permitted within set rules. Each laser is effectively identical whether brand new or ten years old, with a two-part free standing mast, sleeved sail, and lightweight hull.  Three separate rig sizes can be fitted, the 4.7 square metre, the 5.76 Laser radial, and the 7.06 laser standard. Each laser is a ‘single hander’, to be sailed by one, however class rules permit a crew of two. 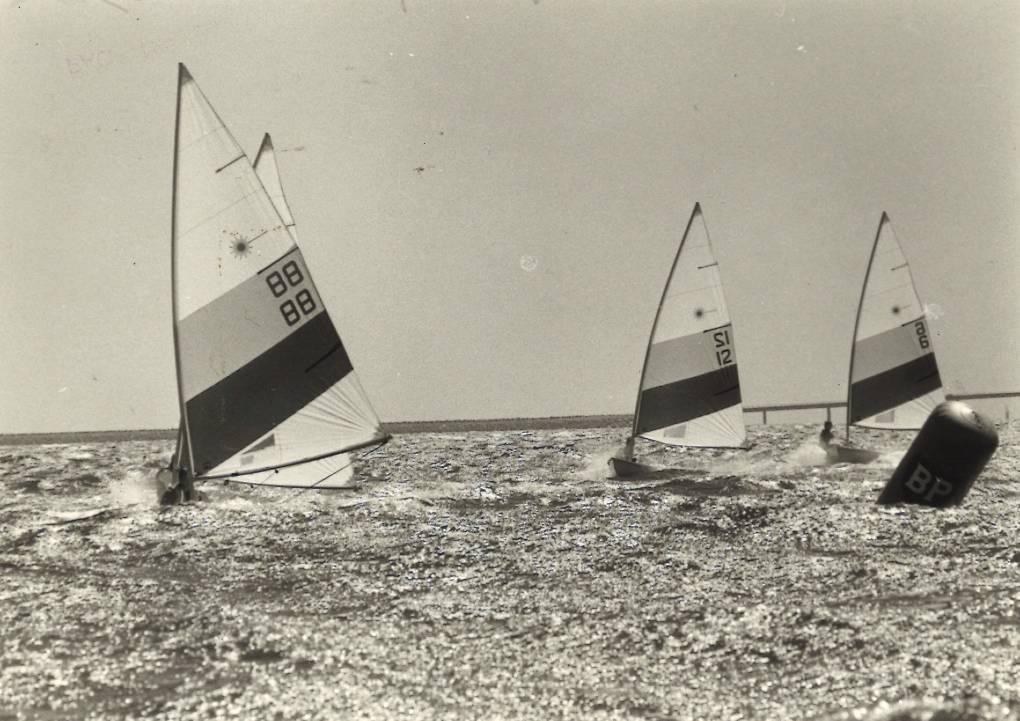 The laser had a somewhat unusual on water debut, appearing first at ‘America’s Teacup’ a regatta organised by Ian Bruce’s magazine at the Playboy mansion on Lake Geneva in Wisconsin. This sought to promote an emerging class of boats costing less than $1200. Among the 51 entries were three craft that changed sport – the laser, the hobie 14, and the windsurfer.

The design of the laser, and in particular the changeable rigging, presents as an ideal model for experience development – from young sailors to Olympians. It allows for further flexibility for individual sailor sizing and varying wind conditions. The laser was first introduced as an Olympic one person dinghy class in 1996, and Australia has held a prominent podium record since. Tom Slingsby took gold in 2012, and Tom Burton gold in 2016 on his Olympic debut, Australia’s only sailing gold at the Rio Olympics.

Established in 1956, Double Bay Sailing Club is managed and run entirely by volunteers. It hosts the largest laser sailing fleet in Australia with over 50 sailors participating in events each week. These range in heats for beginners to state, national, and world champions. Andrew Cox reflects on how Sunday’s regatta may further bolster investment in the innovative and accessible laser for generations to come:

“We are thrilled to be hosting this showcase event, which will highlight the popularity, the competitiveness, and the fun of the ILCA Laser class, and which we hope will inspire new and returning sailors to the sport”.

Blog compiled with the assistance of the Double Bay Sailing Club

View all posts by David O'Sullivan→
Posted in: Vessels
↑