Luis Anibal Guevara was born in 1949 in the Ecuadorian capital of Quito, situated 2,850 metres above sea level and far from the Pacific Ocean. He was the eldest of six siblings; his father was a politician and his mother a dressmaker and talented cook who instilled in him a passion for travel and learning something new every day. In 1966 Luis was a cadet in the Ecuadorian Navy when he crossed paths with the Spanish explorer Vital Alsar. It was a meeting that would change the course of Luis’ life. 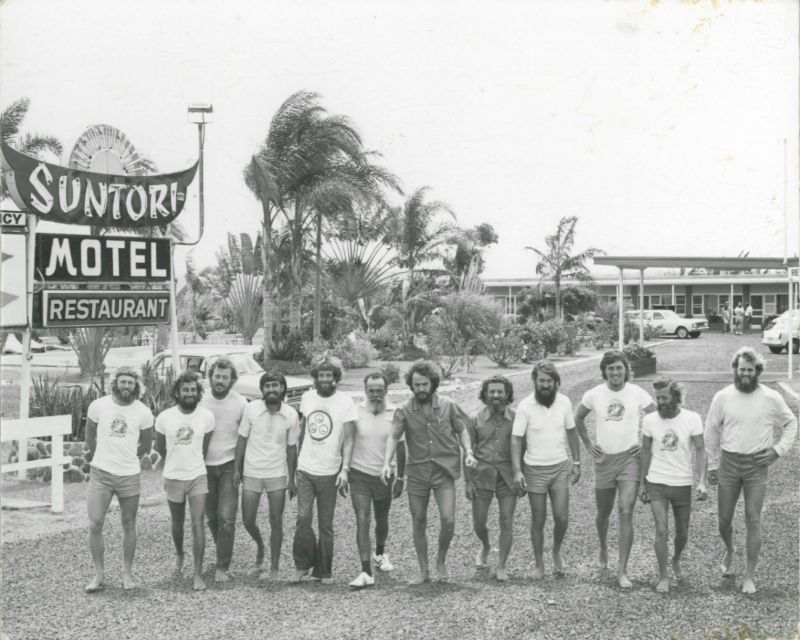 The 12 sailors from the Las Balsas expedition in front of the Suntori Motel and Restuarant in Ballina, New South Wales, 1973. Luis Guevara is fourth from left. Image reproduced courtesy Ballina Naval & Maritime Museum

Vital Alsar had been inspired by the story of the legendary Kon-Tiki expedition in 1947, when Norwegian adventurer Thor Heyerdahl and his five crew sailed a primitive balsa-wood raft from Peru to the Tuamotu Islands in French Polynesia. Alsar aspired to double the 8,000-kilometre distance covered by Kon-Tiki in 101 days. Luis Guevara recalls:

I met Vital Alsar the day he was collected from the sea after a failed expedition close to the Galápagos Islands [some 900 kilometres west of mainland Ecuador]. Those days no one would believe it was possible for a balsa raft to navigate the ocean or keep afloat after several months on the Pacific. I asked him to consider me for the next expedition.

Luis’ opportunity would come in 1973. Three years earlier, Alsar and his three crew had successfully sailed a balsa-wood raft 13,800 kilometres from the Ecuadorian port of Guayaquil to Mooloolaba on Queensland’s Sunshine Coast. This expedition, known as La Balsa (‘The Raft’), took 160 days and, at the time, was the world’s longest recorded raft voyage. Many attributed it to sheer luck, however, prompting Alsar to launch a new expedition in three rafts called Las Balsas (‘The Rafts’), to prove that the ancient civilisations of South America could have navigated fleets of balsa rafts to trade or migrate across the Pacific and settle in Polynesia.

For Las Balsas, Alsar recruited an international crew of 11 men. Two had participated in the 1970 La Balsa expedition – Marc Modena from France and Gabriel Salas from Chile. The others were Hugo Becerra, also from Chile; Jorge Ramirez from Mexico; Fernand Robichaud, Greg Holden and Gaston Collin from Canada; Tom McCormick, Tom Ward and Mike Fitzgibbons from the United States; and Luis Guevara from Ecuador.

In 1973, 24-year-old Luis left the Ecuadorian Navy and joined Las Balsas as a navigator. He says:

My navigation skills were not only learnt in the Salinas Naval Academy, but I also went to the Franciscan Order to look at some old manuscripts and learn the art of guiding a raft without rudder across the Pacific. I also felt I needed to prove for myself that my ancestors could use these rafts for long voyages before Cristóbal Colón [Christopher Columbus] discovered the Americas.

All 12 Las Balsas sailors were involved in building the three rafts Guayaquil, Mooloolaba and Aztlán, which were based on designs used by the indigenous South Americans before the arrival of Spanish explorers and conquistadors in the 15th and 16th centuries. Measuring 14 metres long and 5.5 metres wide, each raft was constructed from nine balsa-wood logs and had a thatched cabin to provide shelter for the crew. Luis remembers:

We all went to the jungle at the Hacienda la Clementina and cut the balsa trees in full moon [when sap rises and fills pores, helping to prevent waterlogging] to avoid them being too heavy and sinking during the trip. We also cut bamboo and caña de Guayaquil [a native bamboo]. Then we took the materials to Guayaquil and built the rafts alongside the Guayas River.

It was all done by hand, carved and joined together with manila ropes. The most important part was to cut, by hand, the spaces required for the guaras – long pieces of hardwood used like a centreboard in different positions of the raft, to create stability and used instead of a rudder. If you lifted the guaras from starboard, the raft moved to port, and vice versa. This was different from the design of Kon-Tiki [now displayed at the Kon-Tiki Museum in Oslo, Norway], and it became quite a skill to move them just enough up or down, in order to navigate in a set direction. 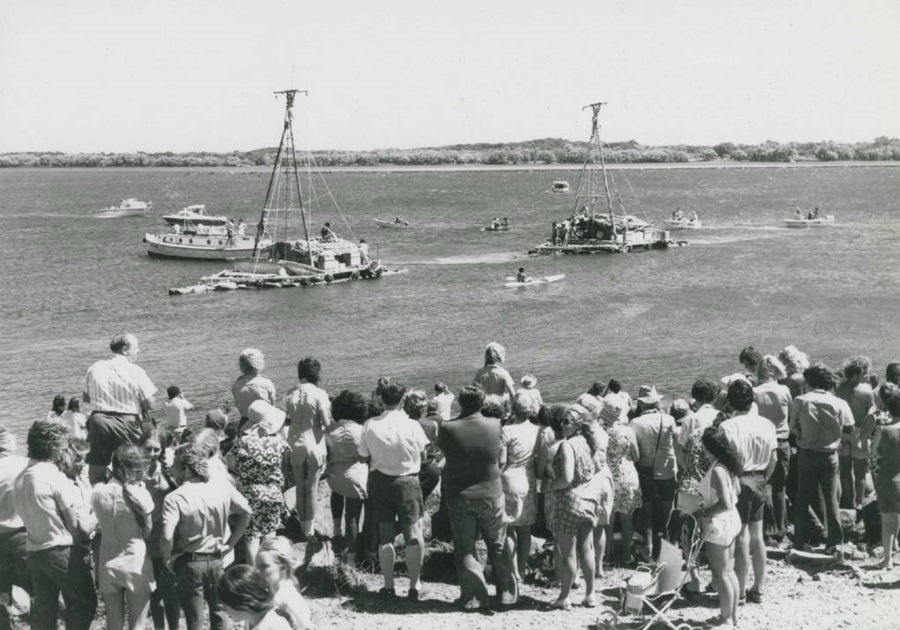 Ahead of their departure in May 1973, the crew packed enough water supplies to last several weeks, after which they would rely on rainwater collected in buckets. In terms of food, Luis explains:

Most food was prepared in the same way as the old tribes from the coastal areas of Ecuador. Eggs were immersed in calcium sulphate to keep them good for four months. Sausages were prepared and immersed in pork lard to keep them for a long period of time. There were lots of grains, dried and fresh; potatoes; lots of different kinds of flour, made mostly from quinoa, corn and red beans; and also a bit of tequila from the Mexican Ambassador.

The bulk of their protein would come from freshly caught fish, such as tuna and dorado (mahi-mahi).

Luis took two pairs of jeans, two sweaters, half a dozen pairs of underwear, a diving suit and three Ecuadorian hats (Panama hats). He also carried a supply of his mother’s home-made chocolate, a photograph of his family, a banner from the Ecuadorian Navy and his passport (which he would subsequently lose during the voyage). The night before departure, Luis says:

I was requested to meet the highest-ranking officers from the port of Guayaquil. They were kind and proper, but literally told me that if I did not succeed for our history, then don’t bother to return. That is how important our expedition was to acknowledge the techniques of the indigenous people in the pre-Columbian era. I knew we will make history.

On 27 May 1973, thousands of people lined the Guayas River in Guayaquil to farewell Las Balsas. Luis recalls, ‘I was so happy to finally leave Ecuador as the preparations took about three months. We all knew that the expedition would not be any shorter than six months.’

After the Galápagos, there were tropical storms coming from the south, which were quite strong. The whole crew had to work day and night for many days without end to keep the raft going. A raft is a totally different craft to navigate compared to a sailing vessel. It is heavy, lacks control and you are only one foot [30 centimetres] above water at all times, so you are wet most of the time. A storm near Rarotonga [in the Cook Islands] lasted for 10 days and created problems trying to keep the rafts close enough together. One time, my raft became separated from the other two rafts for a period of eight days. However, I knew we will find them further west and kept our bearing 270 degrees west for several days until we saw them as a dot on the horizon and reunited with them. 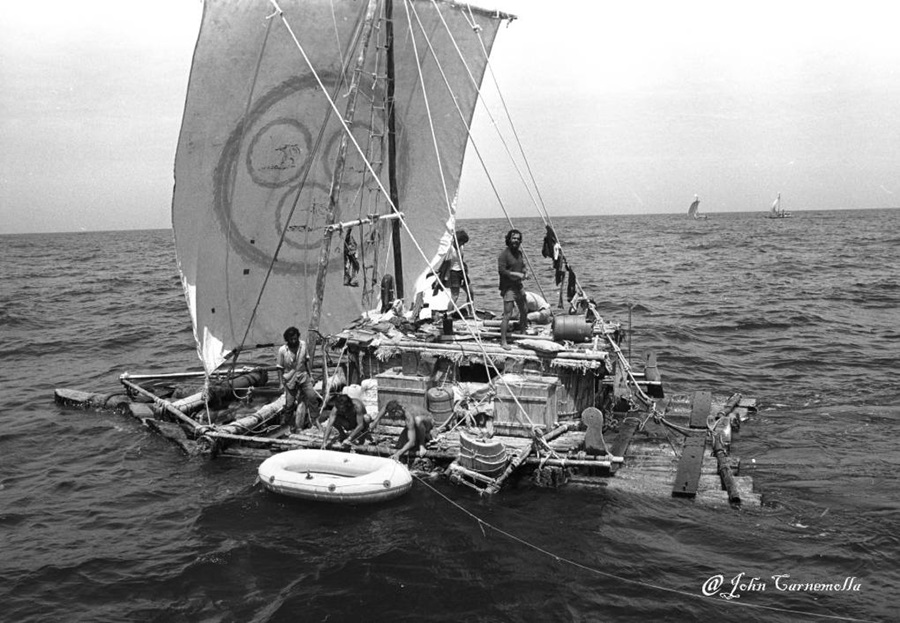 One of the Las Balsas rafts at sea, with the other two rafts in the background, 1973. Photograph by John Carnemolla. Image reproduced courtesy Ballina Naval & Maritime Museum

On 21 November 1973, after 178 days at sea, Las Balsas arrived at Ballina in the Northern Rivers region of New South Wales. The expedition had travelled 14,000 kilometres across the Pacific Ocean from Ecuador to Australia, eclipsing the previous record set by La Balsa in 1970. The rafts Mooloolaba and Aztlán landed safely at Ballina, but as Luis explains, ‘We [on Guayaquil] were the last ones to finish the expedition as our raft was involved in a serious storm just in front of Ballina and broke down. We were collected by the Royal Australian Navy ship [HMAS Labuan].’1

We had a great reception on arrival and I later had the pleasure of meeting [then Prime Minister] Gough Whitlam and several of his ministers when we went to [Parliament House in] Canberra. We had the opportunity to exchange stories of our past way of life on the rafts with the ministers and of the new enormous continent we had landed on. We did not know the magnitude of differences between those worlds.

While Luis had never intended to migrate to Australia, he states:

Ecuador had a military junta and I was not very happy to return. I never accepted the decoration offered to me by the Ecuadorian government. The Australian government was very supportive for us to stay and I gladly accepted their offer to stay in Australia. Now reflecting on this after many years, this was my best decision.

Luis found a job as a tradesman with Civil and Civic in Sydney, before enrolling to study at the University of New South Wales. He became a biomedical engineer, researching knee replacements and cochlear implants. He also became the first Honorary Australian Consul for the Republic of Ecuador.

Luis is married to New Zealand-born Maryanne Barnard and has two children, Elyse and Jean Paul. Elyse, also a keen sailor, studied medical sciences and works in medical research. Jean Paul joined the Royal Australian Navy and served in Iraq, before moving to the USA to study international relations. He met his partner Fran in the Galápagos and they now have a daughter named Isabela.

Luis Guevara, a self-proclaimed ‘proud Aussie’, was registered on the Welcome Wall by his wife, Maryanne. Asked to reflect on his role in Las Balsas, the longest recorded raft voyage in history, Luis says, ‘Modern navigation is so completely different to the old timeless navigation used by the pre-Columbian sailors. It is important to acknowledge the link between navigation and migration, and that the two come hand in hand, even these days’.

[1] Left to drift, Guayaquil ended up in Newcastle (nearly 600 kilometres south) and was later burned as scrap. Aztlán and Mooloolaba were moored on the Richmond River; the former was secured, while the latter eventually broke apart. Today a composite of these two rafts remains on display at the Ballina Naval & Maritime Museum on the north coast of New South Wales.

This article was originally published in Signals 131.