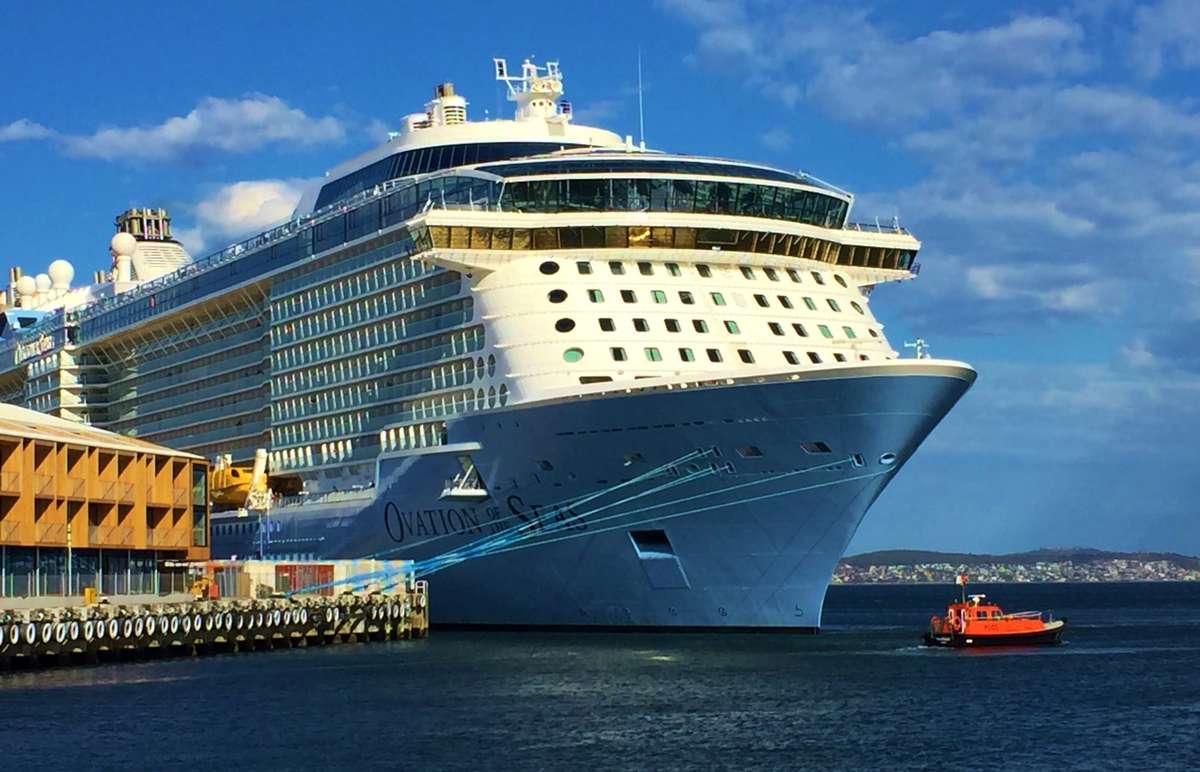 Big is best,
Big wins
Big is like – OMG – gigantic
Big is beautiful!

Look what’s outside my hotel window in Hobart: Ovation of the Seas, one of the biggest ocean cruise ships in the world. It’s here, you can’t miss it, it seems longer than the docks, wider than the widest sea, able to leap tall buildings in a single bound – anything goes in this department.

Now, I am here in Hobart for other reasons, helping set up our Tasmanian ARHV research position with the successful applicant Peter Higgs, but just now my attention is focussed on this vessel – this thing is seriously big. 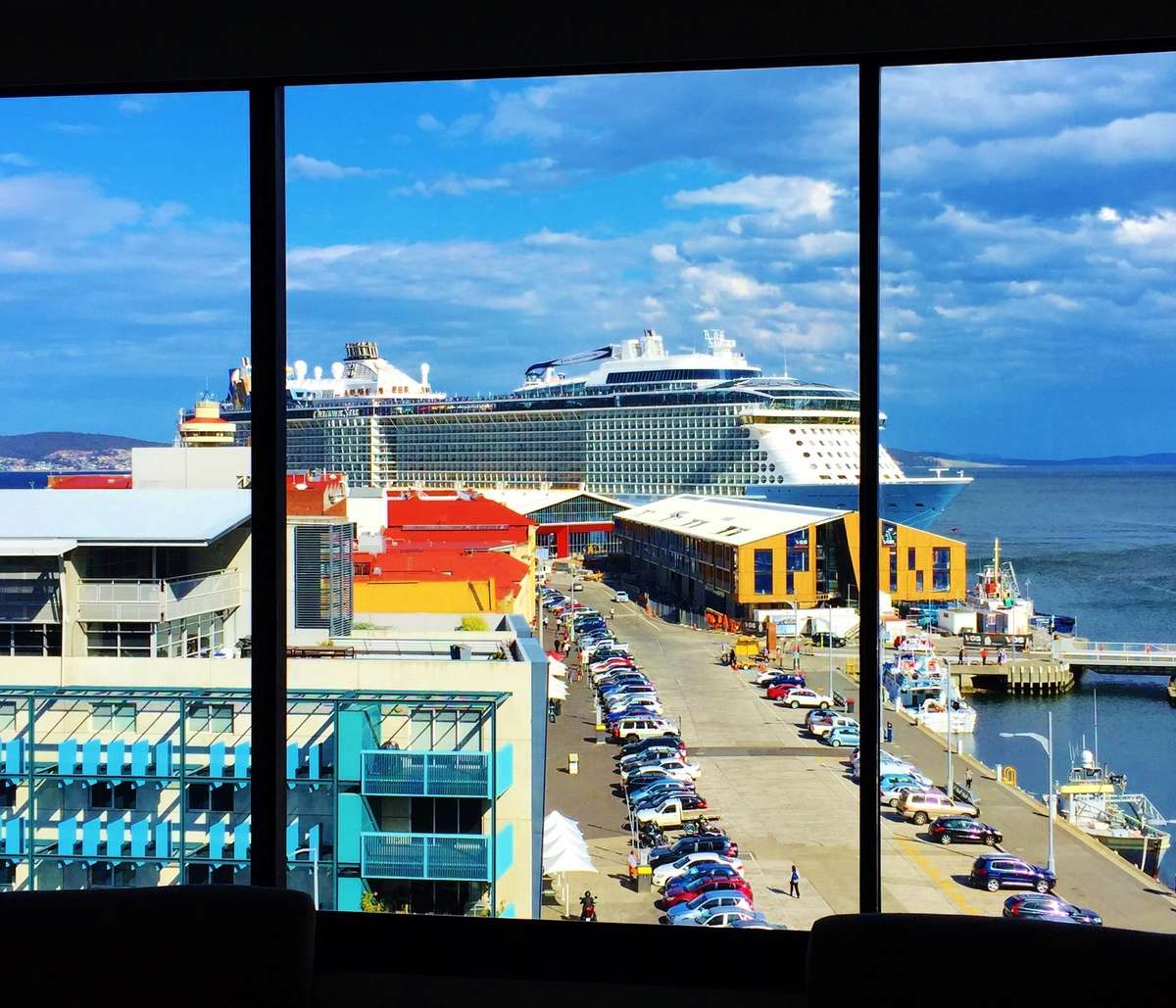 So I head out with the masses. Everyone is drawn to the waterside to see this ship – will it be like this when the aliens come? It’s big, it looms over us, the guys in the port control tower have to look up to it, not down, even the weather is affected – the wind can’t get by and has to speed up to get around the bow, whipping up the spray.

It is its own self-contained colony, probably generating enough power, cash flow, iPhone usage, food, music, dance moves, shops, cocktails, coffees and traffic problems to deserve a postcode while dockside. It carries almost 5000 passengers and the newspaper says it weighs as much as 63,500 elephants; on the elephant to passenger scale that’s almost 13 elephants each. 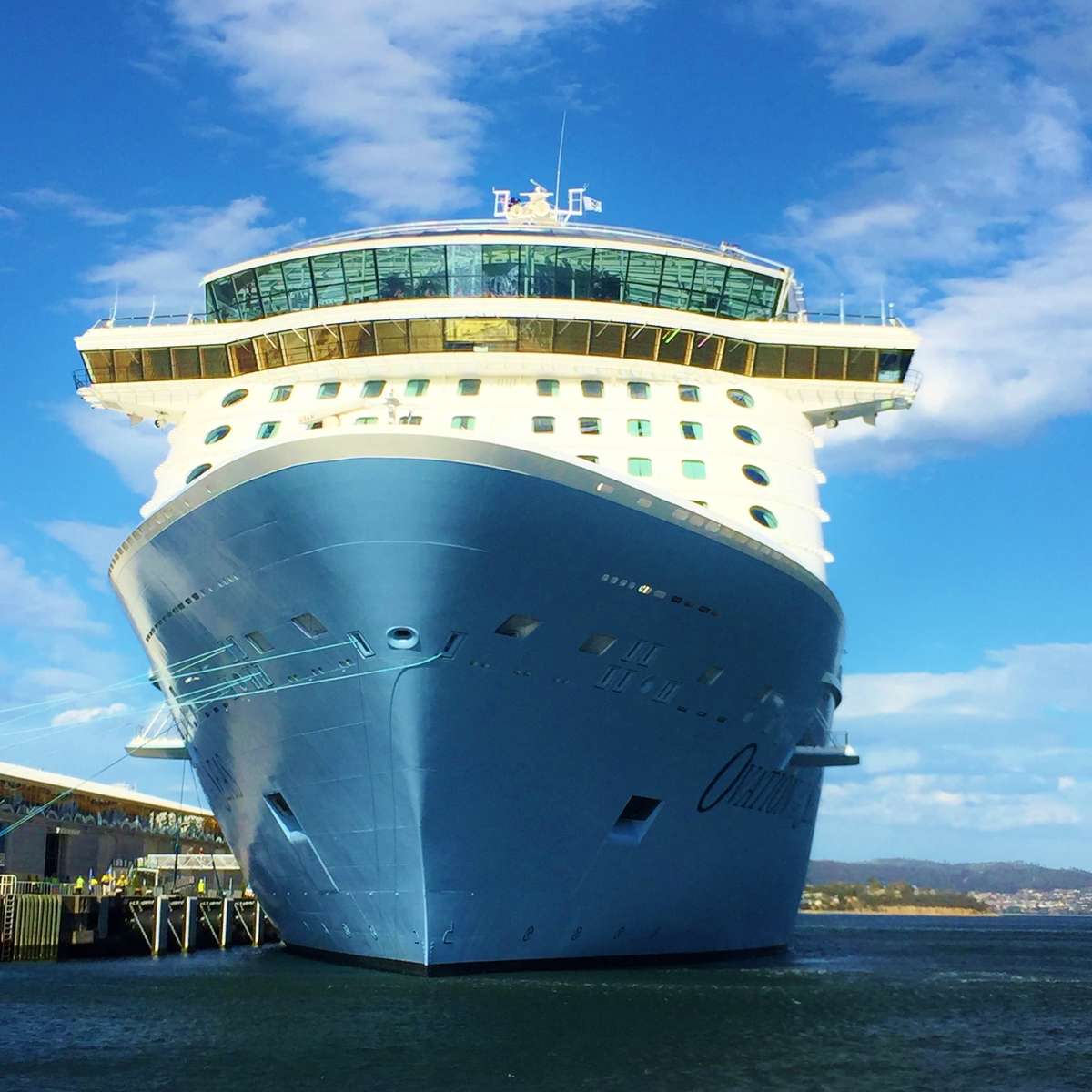 But wait ye feeble speck of humanity whose eyes see naught but the mammoth beast perceived –its flight against the tide beckons, forsooth it sayleth to the yonder horizons that bear to the east…  (Shakespeare- The Shyppyng Newth, Ch 2 V 45)

Yes, just as I am thinking this will be an amazing sight at dawn, it’s clear that all the lines have been dropped, and the behemoth is free to go, and so it does on its own terms. The minuscule pilot boat suggests it might like to follow, ‘but after you sir, I mean madam, your highness, tallness, bigness, whatever – anything I can help with? No? …. I’ll move.’

With thrusters, pivoting pod drives and joystick controls, ships don’t need help these days, so no dirty tugs putting marks on the hull, thank you. Silently it eases away sideways; don’t try that in the Kingswood. Three blasts from the horn – going astern – the triple trumpet sounds echo across the docks. They probably chose the tone first then fitted the ship’s size to it. Transfixed, you see the ship part slowly away from the dockside, but there’s no noise – even among the onlookers, there’s barely any talk. Phone cameras take stills, videos, selfies – all for later twittery fluff. We are in awe – a better name could be Oration of the Seas – this is a sermon and we are converted.

OOTS (smart abbreviation) is a demonstration of engineering and design that most of us won’t get any closer to. We are lucky Australia is big, too, and has ports that can accommodate it.  It’s big, as I keep saying, and demands respect.

Nonchalantly, it backs out (going astern) then engages forward – ‘May we have ahead, please, engineer?’  It just glides off effortlessly down the Derwent, a lesson in controlled momentum on a grand scale. It does not need to be bright red to catch attention, no need to be brash – the ice blue, slivery blue, elegantly chosen blue, OK that damn icecream-cake blue they used for the hull  is working so well, understating  the  size as soon as it’s away from anything to give its mass  some context. As OOTS goes down the Derwent, the question must be asked – is it moving away from us, or are we stepping back to let it pass?

A fairly decent southerly blew in just a bit later, the cold front probably apologised and asked permission from the ship to continue by, with a promise to call ahead next time.

Gone from the scene, but not from the mind. I had to put it down in words and pictures. This won’t go away easily.

It’s big, and it’s omnipresent. A day later and I am back in Sydney. I cross the harbour Bridge (that was big too, until now) and there it is again, rising up out of the mist and fog on a wet morning. I am sure OOTS has got bigger. You look across and can see it’s way higher than the span we travel across every day.

Find out more about the Australian Register of Historic Vessels (ARHV) on our website.