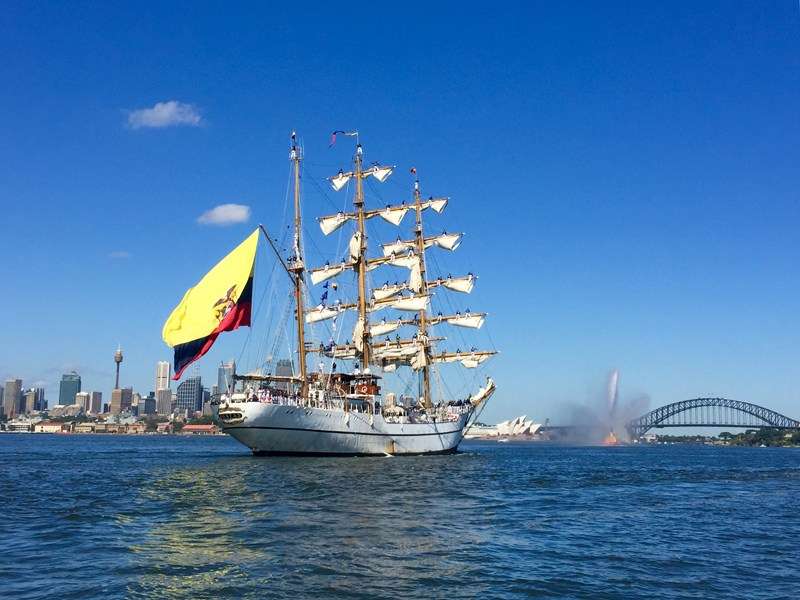 The Ecuadorian navy training tall ship Guayas arrived at the Australian National Maritime Museum this morning to an enthusiastic welcome from members of the Ecuadorian community and museum visitors and staff.

During its four-day visit the ship will be berthed at Wharf 7 and will be open to the public, with free admission. Visitors are welcome to climb on board, meet the crew and learn more about this unique vessel and its message. 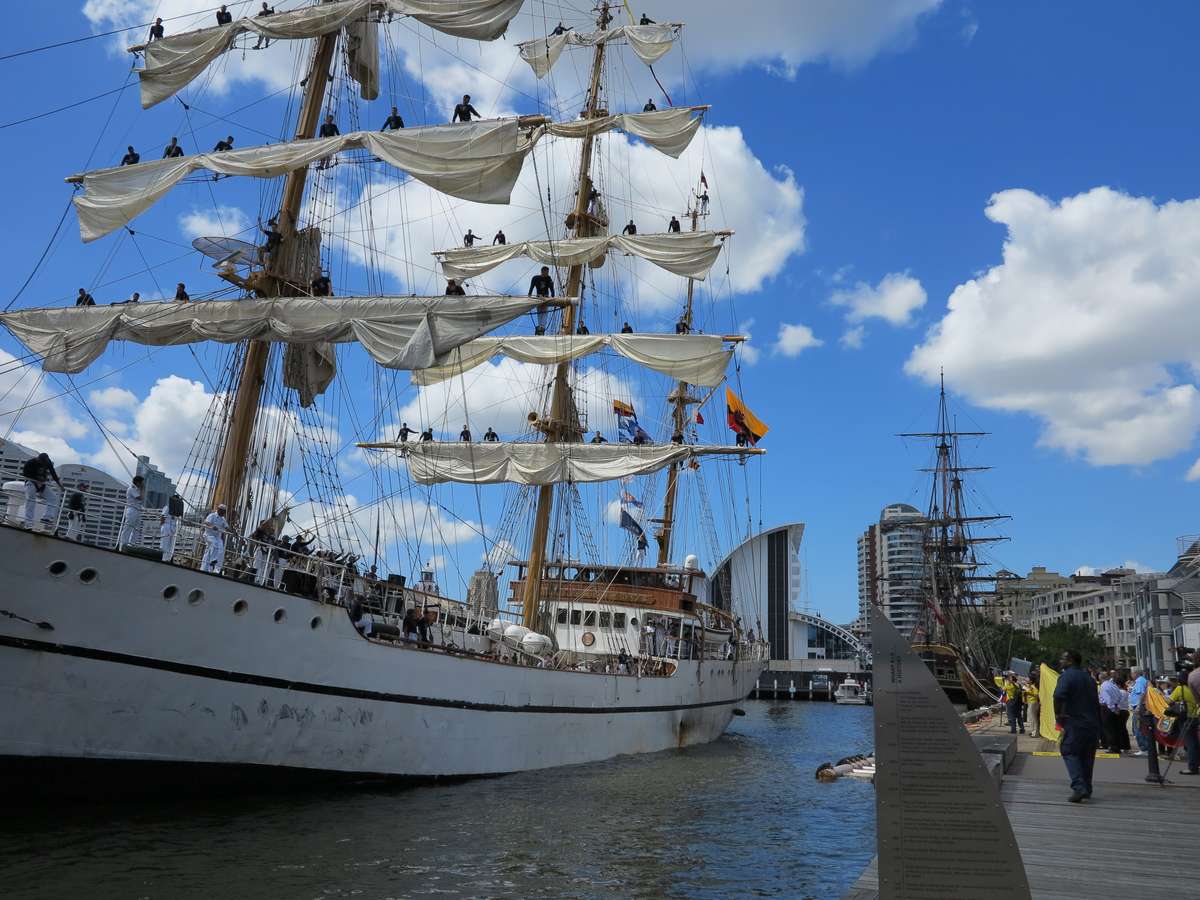 Crew aloft as Guayas comes alongside its berth at Wharf 7. Photo Michelle Mortimer/ANMM

Guayas sailed into Perth, its first Australian port of call, on 21 December after seven months at sea. Its visit to Australia is part of a round-the-world tour, the longest the ship has undertaken. It will visit 23 ports in 22 countries in 294 days, traversing four oceans and travelling 35,000 nautical miles (65,000 kilometres). Forty-eight midshipmen will complete their navigation course to become officers of the Ecuadorian Navy. 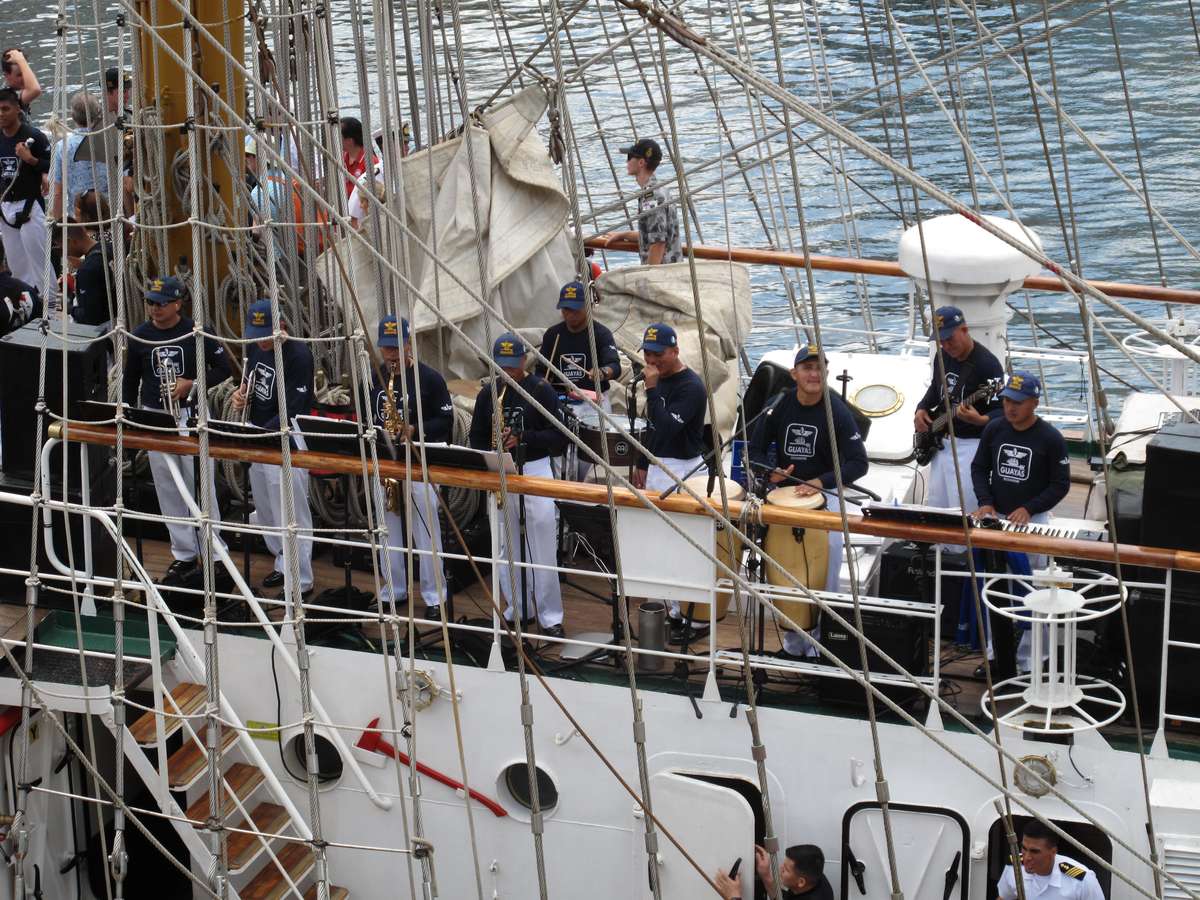 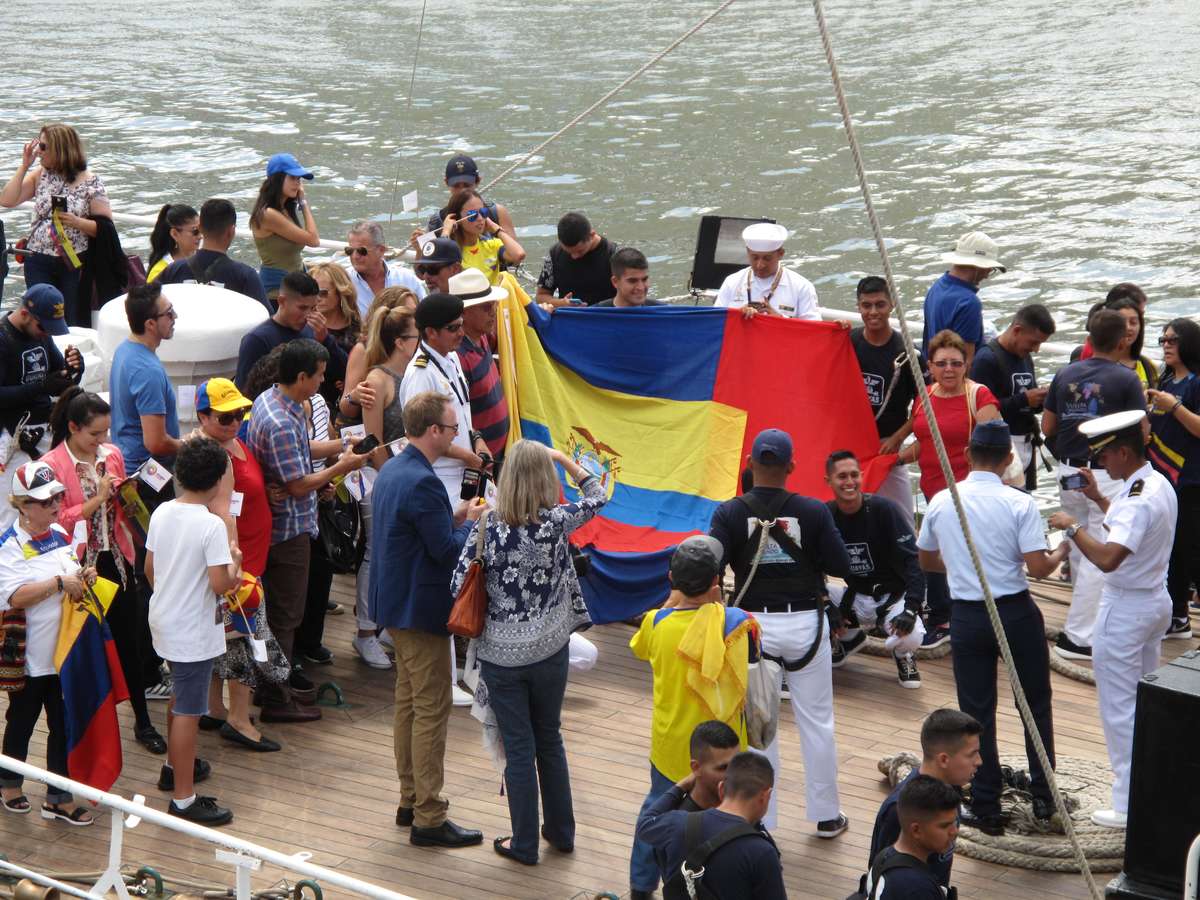 Visitors and crew mingle on the foredeck. Photo Janine Flew/ANMM

Known affectionately as Ecuador’s ambassador ship, Guayas seeks to strengthen relations between Ecuador and visited nations while promoting Ecuadorian tourism. It is also important in the training and academic development of Ecuadorian navy personnel.

Guayas was built in Bilbao, Spain, by Astilleros Celaya in 1976. It sails with a crew of 154 sailors and trainees; representatives of the Royal Australian Navy were among the crew sailing from Perth to Sydney. This visit is its first to Australia since 1988, when it took part in the nation’s Bicentenary celebrations. 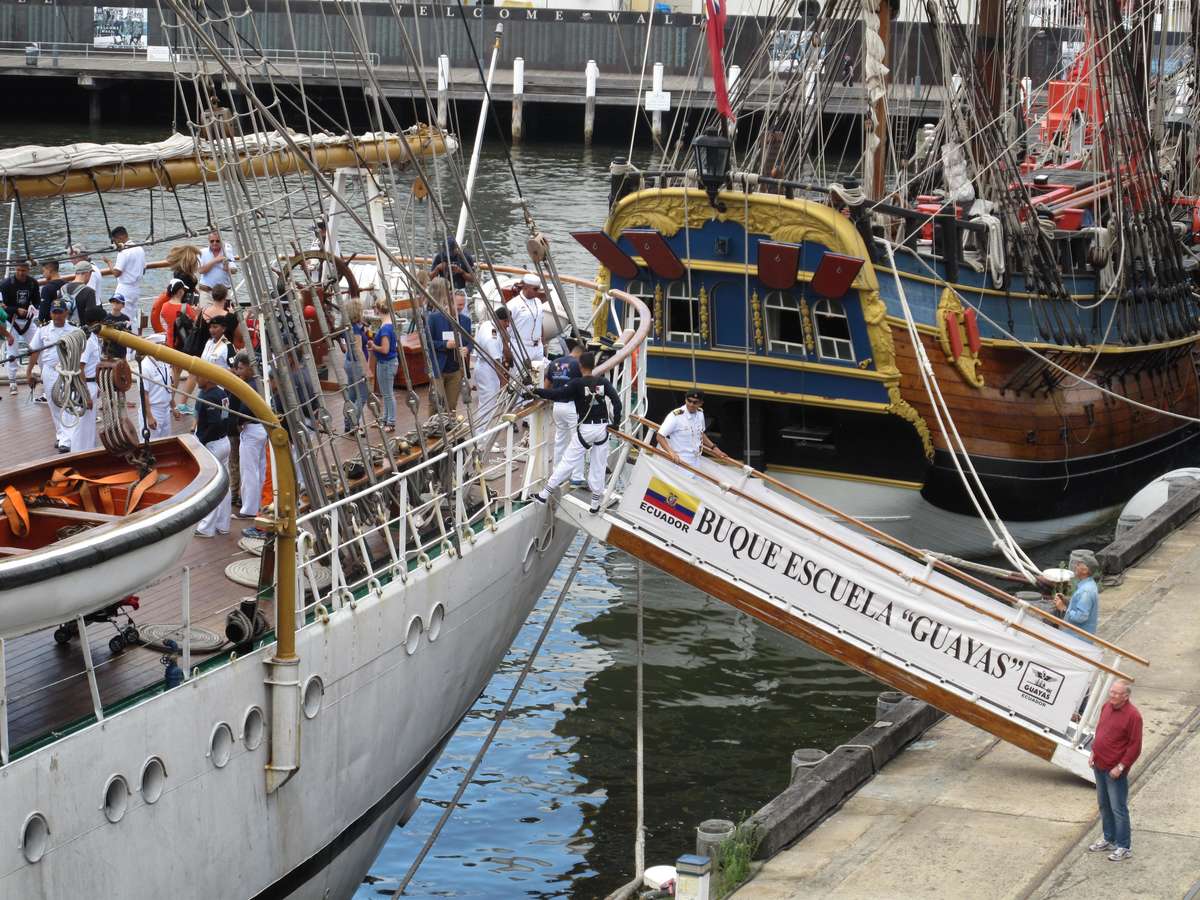 Guayas will be moored at Wharf 7, next to the main museum building, until Tuesday morning. Photo Janine Flew/ANMM 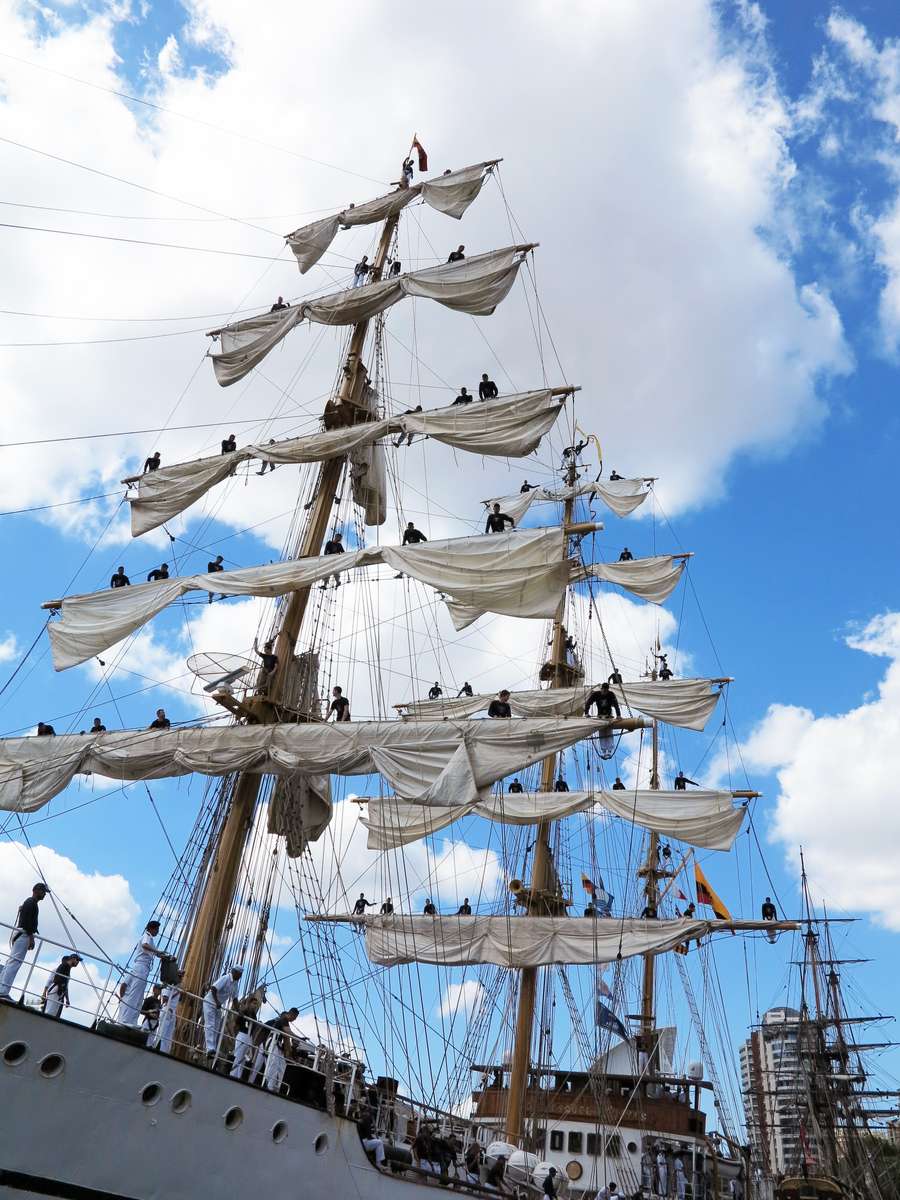 The steel-hulled barque is 78.4 metres long and can display a sail area of 1,410 square metres. Photo Michelle Mortimer/ANMM

Guayas departs Wharf 7 at 9 am on Tuesday 12 January.

View all posts by Janine Flew→
Posted in: Vessels
↑