One of my favourite objects in the museum’s collection is a charming needlework sampler made by 19-year-old assisted immigrant Julia Donovan on board the Carnatic in January 1879. Immigration records show that Julia arrived in Rockhampton, Queensland, from England on 5 February 1879, and presumably went into domestic service in the growing port town. 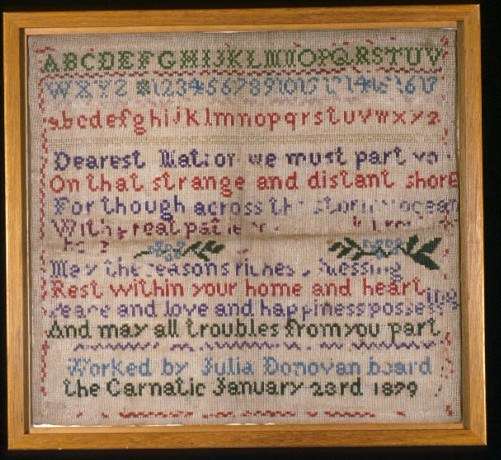 Needlework sampler made by Julia Donovan on board Carnatic en route to Australia, 1879

From the 17th century, embroidered samplers were used to teach young girls the essential art of needlework, incorporating a repertoire of stitches and motifs that would be used to mark household linens and garments. While samplers typically featured a combination of letters of the alphabet in upper and lower case, numerals, geometric borders and small emblems, the specific arrangement of motifs was often highly personal to the maker.

Julia Donovan’s sampler is hand embroidered in cross stitch using green, blue, red and purple wools on a square piece of cloth. It includes the alphabet, numbers 1 to 17 and two sprays of blue flowers. Julia’s sampler is particularly special as it is signed and dated, and connected to her journey on Carnatic through the following verse that reveals a migration story in stitch:

Dearest Matron we must part you
On that strange and distant shore
For though across the stormy ocean
With great patience you us bore
May the seasons richest blessing
Rest within your home and heart
Peace and love and happiness possessing
And may all troubles from you part.

The sampler was probably given by Julia as a gift to the ship’s matron, Alice Wadley, who worked as a stewardess and matron on board migrant ships on the Australian route from 1879 to 1887. It illustrates the friendship between the matron and her young charge over the three-month voyage, while also highlighting broader themes such as late 19th century attitudes to the role of women, colonial education and domesticity, and the way in which gendered skills were transferred across cultures and continents – from a familiar land to ‘that strange and distant shore’.

Julia Donovan’s sampler is just one example of the intriguing intersection between needlework, craft and maritime history in the museum’s collection. Over the next few weeks I will be looking at some other wonderful examples of nautical craft at the museum. Next time – sailor’s woolwork pictures or ‘woolies’!