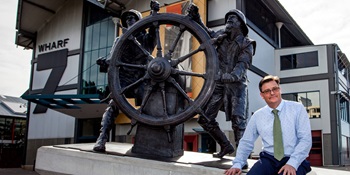 Mr Kevin Sumption, Director and CEO of the Australian National Maritime Museum, announced today that the shipwreck of James Cook’s famous vessel, His Majesty’s Bark Endeavour, has been positively identified. A 22-year program of fieldwork and research has led Sumption to conclude that the Newport Harbor, Rhode Island USA site known as RI 2394 is the location of remains of the HMB Endeavour. It was scuttled by the British 244 years ago and lay forgotten for over two centuries.

Mr Sumption stated, “I am satisfied that this is the final resting place of one of the most important and contentious vessels in Australia’s maritime history. Since 1999, we have been investigating several 18th century shipwrecks in a two square mile area where we believed that Endeavour sank, however, the last pieces of the puzzle had to be confirmed before I felt able to make this call. Based on archival and archaeological evidence, I’m convinced it’s the Endeavour.

“It’s an important historical moment, as this vessel’s role in exploration, astronomy and science applies not just to Australia, but also Aotearoa New Zealand, the United Kingdom and the United States.

“Although only around 15% of the vessel remains, the focus is now on what can be done to protect and preserve it. The museum continues to work closely with maritime experts in Rhode Island and of course with the Australian, Rhode Island and US Governments to secure the site.”

Mr Sumption noted the combined efforts that led to identification of the wreck, “We pay tribute to the work of Dr Kathy Abbass and her team at the Rhode Island Marine Archaeology Project for their ongoing commitment to the site and its history, and also acknowledge the significant contribution made by the United States of America’s Bicentennial Gift and the Silentworld Foundation in making this work possible.

“We are currently in the process of finalising our report on the site and are looking forward to that report being peer reviewed and published in due course. The archaeological work continues, and we anticipate further discussion of the evidence over the coming months. We look forward to continuing the work in Rhode Island as we move to the next phase.”

The museum also launched an innovative new web experience dedicated to the Museum’s maritime archaeology research undertaken over the past 22 years. Deep Dive will enable the general public and the academic community to learn more about the work of the museum‘s maritime archeologists, using immersive videos, animation, underwater footage, and photogrammetry data sets. This website is the museum’s ongoing centre for this research.

Audiences can experience rare insight into what it is like to be at deep depths of the ocean, discovering and investigating shipwrecks and research sites. Deep Dive utilises innovative technologies to deliver these rare underwater experiences, now available to everyone via an internet browser. The museum will continue to publish the work of the maritime archaeology team as they uncover stories, innovation and experiments.

In launching the Deep Dive website today, the Minister for Communications, Urban Infrastructure, Cities and the Arts, The Hon. Paul Fletcher MP, said,

“As the positive identification of the Endeavour shows, marine archaeology is a fascinating and rapidly developing field of expertise. I am delighted to launch Deep Dive, which will give the community unprecedented access to this aspect of the Museum’s activities.”

There are several key identifiers that set Endeavour apart from the four other ships sunk in Newport in August 1778.

Originally launched in 1764 as the Earl of Pembroke, in 1768 the vessel was renamed Endeavour by Britain’s Royal Navy and prepared for a major scientific voyage to the Pacific. It was later sold to private owners and again renamed as Lord Sandwich. Under this name it was deliberately sunk in 1778 by British forces in Newport Harbor, during the American War of Independence.

The vessel is famous in Australia and New Zealand as James Cook’s Endeavour. Over 1768 to 1771, Endeavour voyaged to the South Pacific, primarily to record the transit of Venus in Tahiti in 1769. Following the completion of that astronomical mission, the bark sailed around the South Pacific searching for the Great Southern Land, charting the coast of New Zealand and the east coast of Australia (New Holland) in 1770.

Endeavour was then used by the Royal Navy as a transport to take supplies to the Falkland Islands. In 1775, it was found to be in poor condition and sold to a private owner, who renamed it Lord Sandwich. It carried goods to the Baltic before being hired by the Royal Navy to operate as troop transport. In 1776, Lord Sandwich took soldiers to fight against the American colonists who sought to break free from British control.

In August 1778, Lord Sandwich was in Newport Harbor, holding American patriots who had been captured by the British. When a French fleet of warships sailed in to support the American forces, the British scuttled (deliberately sank) Lord Sandwich and four other vessels Earl of Orford, Mayflower, Peggy and Yowart to create a blockade at the northern end of the Harbor. This happened one year before Cook’s death in Hawaii while on his third Pacific voyage, and 10 years before the First Fleet arrived in New South Wales.